Written by: Kathryn Jones
Photos by: Will van Overbeek

Written by Art Williams, Photographs by Will van Overbeek | From the October 2016 issue | Updated: September 16, 2016 | Filed Under: Culture 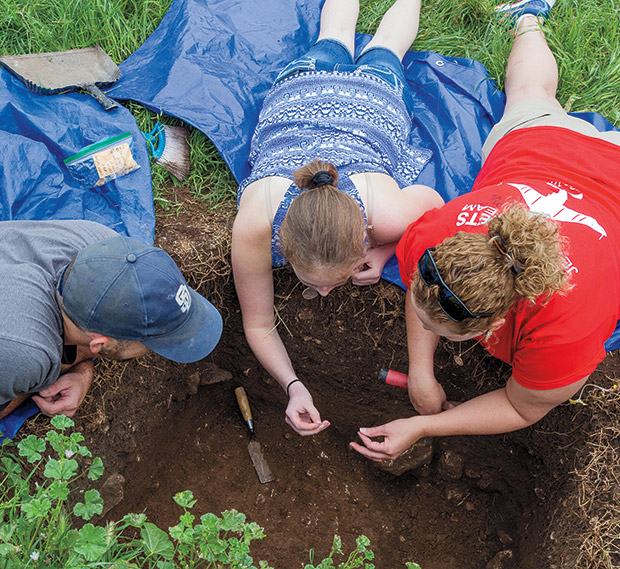 By studying stone points and other artifacts found at the Gault Site and other regional sites, archeologists hope to learn more about the people of the Clovis culture in Central Texas.

In a grassy cattle pasture near Florence, a rounded metal-frame structure covered with sturdy white canvas stands along Buttermilk Creek, pecan trees towering overhead. The Quonset hut-like structure protects a 48-square-meter hole that descends in terraced levels, each layer of soil going farther back in time.

The Bell County Museum in Belton and The Williamson Museum in Georgetown offer alternating monthly guided tours of the Gault Site, year-round. The tours start 9 a.m. and cost $10 per person; children 10 and younger are free. Upcoming tours are scheduled for Oct. 8, Nov. 12, and Dec. 10.

The Gault School of Archaeological Research offers group tours (10 or more participants) of the Gault Site and its lab in San Marcos by appointment. The school also welcomes volunteers interested in doing excavation work in the field or processing work in the lab.

The Bell County Museum’s permanent exhibit, Gault Site: A Wealth of New Archaeological Information, explores the history of the site and the Clovis culture with murals, artifacts, and a film. Hours: Tue-Fri 12-5, Sat 10-5.

This is what 14,000 years of exposed Texas history looks like, or rather, Texas prehistory—thousands of years before the state existed and when some of its earliest inhabitants, the people of the Clovis culture, called this land home.

My husband Dan and I had driven for three hours from our home near Glen Rose to this archeological treasure, known as the Gault Site, tucked off a farm-to-market road near the border of Bell and Williamson counties. Named for Henry Gault, who had a farm on the property in the 1920s, the site is well-known by archeologists and anthropologists worldwide.

The Gault Site is “by any measure, unusual,” says our guide, Clark Wernecke, an archeologist and director of the Gault School of Archaeological Research at Texas State University. “It probably was a gathering place for groups for a long period of time. People really liked this spot and kept coming back.”

Modern-day visitors have been coming, too. The Bell County Museum in Belton and The Williamson Museum in Georgetown offer monthly guided tours, and the Gault School offers group tours by appointment. Visitors can also explore the site’s significance at the Bell County Museum’s Gault Site: A Wealth of New Archaeological Information, a permanent exhibit that explains how this and other archeological sites are “re-shaping what scientists know about the past and who the first people in the Americas were.”

The people of the Clovis culture who lived in what is now Central Texas were Homo sapiens—anatomically “modern human beings, just like us,” Wernecke says. An abundance of springs and food sources—plants and animals like mammoths, bison, and turtles—drew people to this area, as did the large amounts of chert found in the Edwards Plateau. People of the Clovis culture harvested and worked this sedimentary rock to make their stone points with flutes, or concave grooves for fastening to a spear.

“The Edwards Plateau is the largest source of chert in the Americas, and chert is the finest thing you can make tools out of,” says Wernecke, tanned from years of working outside and dressed in knee-high rubber boots, jeans, and a blue work shirt. “It’s stronger than steel, razor sharp, and breaks in a predictable fashion.”

Only about three percent of the Gault Site has been excavated, but the digs have yielded about 2.6 million artifacts, many of them Clovis “bifaces,” or chunks of chert that the Clovis people chipped on both sides to make transporting the rock easier, Wernecke says. “You find them up to about dinner-plate size.”

Clovis bifaces, points, and other artifacts recovered from the site are stored at the Gault School’s lab in San Marcos, waiting for analysis. By looking at the point edges under high-power microscopes, researchers can tell whether the tools were used for hunting, harvesting plants, scraping hides, butchering, or eating meat.

Excavation at the Gault Site has ended for now since researchers have so much material to study. Scientists have scanned the excavated areas with a laser, enabling them to examine 3-D images of the site back at the lab. But the tours will continue; the Gault School plans to add new signage and a visitor kiosk in the next year.

The Smithsonian Institution describes Clovis as “the oldest American culture we know much about.” Archeologists once thought indigenous people came to North America only 5,000 years ago. That belief changed in the 1920s and 1930s.

“Researchers started finding stone projectile points associated with the fossils of mammoths and giant bison—animals that went extinct 10,000 years ago,” the Smithsonian noted in an article on its website.

One of those researchers was J.E. Pearce, the first anthropologist at the University of Texas. Pearce and a crew dug on Henry Gault’s property for eight weeks in 1929. They recovered more than 3,000 artifacts, most of them dating to the past 9,000 years, but three were from the Clovis era, Wernecke says.

The property changed hands a few times over the ensuing decades, with some owners allowing collectors to dig for a fee; looters raided on occasion as well. While archeologists remained interested in a formal excavation, it wasn’t until 1998 that a new landowner contacted UT paleontologist Ernie Lundelius and archeologist Michael Collins, now chairman of the Gault School. At the site, the scientists identified the lower jaw of a juvenile mammoth. They also found ancient horse bones and a trove of Clovis artifacts.

UT reached a three-year lease with the landowner, and from 1999 to 2002, archeologists recovered more than 1.4 million artifacts, about half of them dating to the Clovis culture. The artifacts included engraved stones with geometric designs such as grids, spirals, and paired zigzags—among the “earliest art in the Americas,” Wernecke notes.

Archeologists also found the remains of a house, indicated by a stone pavement floor. “The artifacts on and around it are at least of Clovis age,” Wernecke says. “We are waiting on additional dating, and it is possible it is even older.”

In 2007, the Archaeological Conservancy, a national nonprofit that owns and preserves archeological sites on private land, acquired 60 acres of the 80-acre Gault Site. Meanwhile, the Gault School moved to its new home at Texas State University in 2010. Texas State doesn’t have the facilities to display the Clovis artifacts, but visitors can schedule tours of the lab and view the ancient tools, Wernecke says.

The search for more Clovis evidence is moving forward at other sites in the region. Not long ago, Dan and I visited a dig site east of Evant in Hamilton County, where a rancher had contacted the school after discovering Clovis points and other artifacts. Volunteers, including parents with children, dig with wooden utensils—metal might scratch the stone artifacts—and sift the soil through screens to catch any bit of evidence.

Steven Howard, who’s in charge of field expeditions for the Gault School, says more than 20 private properties are on the school’s “to dig” list, offering volunteers more opportunities to sift through history.

At the Gault Site, a field house currently serves as a makeshift visitor center, displaying bifaces and other finds. Wernecke shows us a plastic bucket full of “debitage,” the debris leftover from making tools. The excavators sifted everything through metal screens, finding animal bone fragments, bits of turtle shells, and—most importantly—flakes from the chipping process.

“Every good detective story hinges on artifacts removed or placed at the scene,” Wernecke says. “These tell us more than the tools themselves. We’re interested in human behavior in the past. This tells us how people are making decisions,” such as which tools to use and how point-makers taught their chert-knapping skills to others in their group.

Archeologists such as Wernecke keep looking for new data that could help explain how people arrived in the Americas, whether it was by crossing a landmass from Asia or by boat to one of the coasts. For now, the origin of the Clovis culture of Central Texas remains a mystery, one that has intrigued Wernecke for the past 16 years he’s worked at the Gault Site. “They were really early, and that’s one of the things we’re still trying to work out,” he says.

However these people of prehistory eventually made it to Central Texas, Wernecke hopes that the Gault Site will remind Texans that history began long before Texas came about in the last 200 years. What lies beneath the Texas soil offers clues to how an entire continent became populated and how ancient people lived. “People don’t realize what’s in their own backyard sometimes,” Wernecke says.