Conjunto Ambassadors Los Texmaniancs on the Magic of ‘Musica Alegre’

From San Antonio to the mountains of China, Max Baca and Josh Baca carry Tex-Mex music across the world 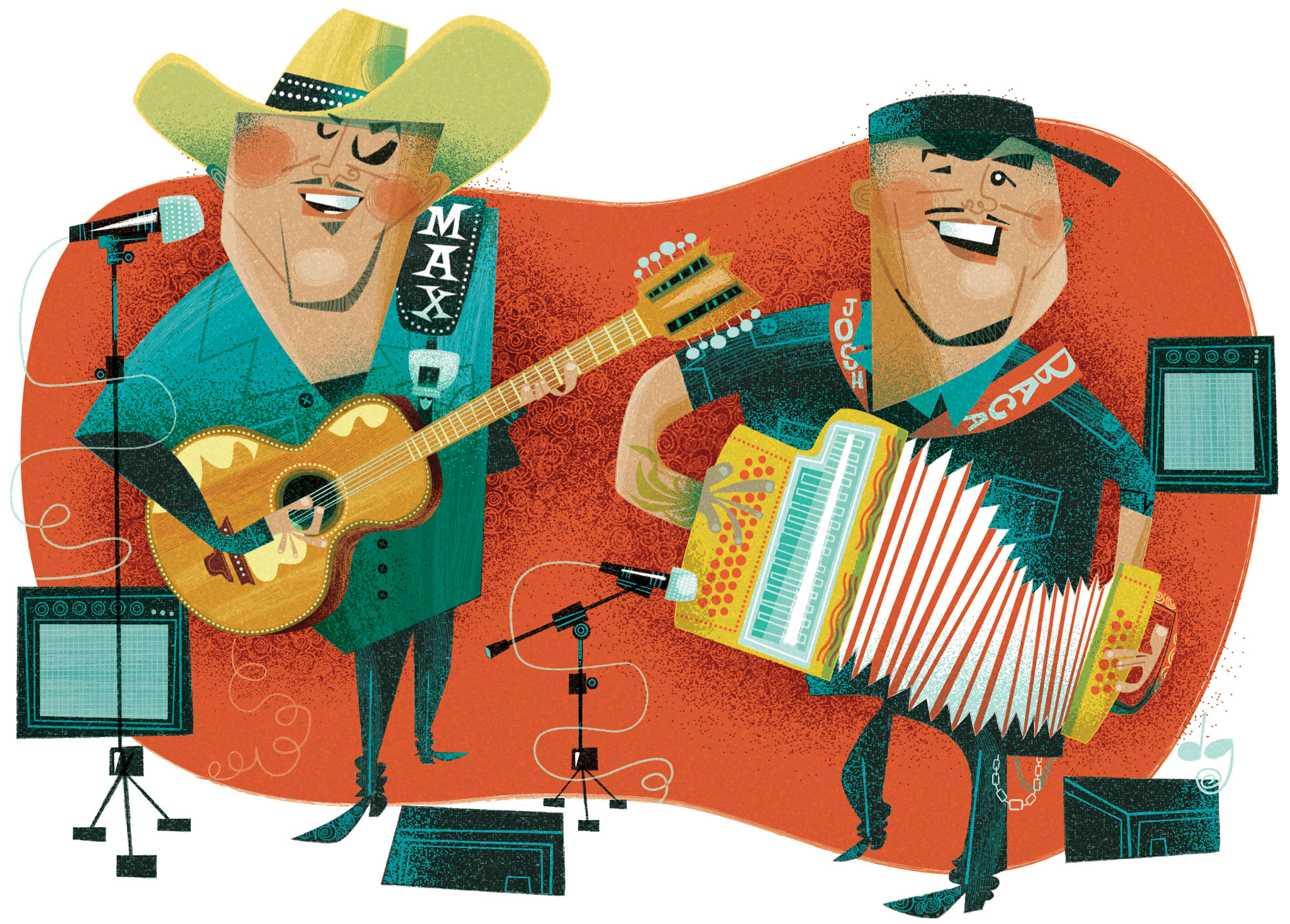 The Tex-Mex sound of Los Texmaniacs is also called musica alegre—happy music—for good reason. That bouncy two-step rhythm, powered by a button accordion and a 12-string guitar known as the bajo sexto, is made for dancing. Sitting in place or standing still is not an option.

And no one sits or stands still when Los Texmaniacs, the band led by Max Baca, 51, and his nephew Josh Baca, 27, are on stage.

“When we play outside the United States, we say we’re representing American music … that we’re from Texas, we’re Mexican Americans, and this is our music.”

Max started Los Texmaniacs in San Antonio 22 years ago to honor the roots of Tejano conjunto music while incorporating rock ’n’ roll, jazz, funk, and other contemporary sounds. He had been playing bajo sexto with the supergroup Texas Tornados and decided to launch his own band when the Tornados took an extended break. Los Texmaniacs quickly carved out a place in the Tex-Mex pantheon. When Josh, a budding prodigy on accordion, joined Los Texmaniacs in 2011, the music ascended to a whole other level.

The two New Mexico natives have become leading ambassadors of Texas-Mexican music. They’ve recorded seven albums, including 2009’s Grammy Award-winning Borders y Bailes, and taken their traditional sounds around the globe, touring Russia twice for the State Department; the war zones of Iraq, Afghanistan, Bosnia, and Kosovo for U.S. organizations; and China and Mongolia for the Smithsonian.

They’ve also updated Tex-Mex, most significantly on 2015’s Americano Groove, which features cameos from the likes of Joe Ely and David Hildalgo of Los Lobos.

Los Texmaniacs will be playing across Texas this summer, when they’re not venturing beyond state lines to spread their musica alegre to the world.

Keep up with Los Texmaniacs’ upcoming shows and performances at lostexmaniacs.com

Q: What’s conjunto?
Josh: Whenever we’re playing overseas, we explain that where we come from, conjunto means an ensemble, a group of four. Audiences everywhere understand that. We explain the music came from Germans and other Europeans settling Texas who brought over accordions and other instruments, and how Mexican Americans, as migrant farmworkers, were listening to that music, and we picked up the accordion and learned to play the polka, the redova, huapango, schottische. We explain how Mexican Americans wanted to create an instrument that took the place of the accompaniment to the accordion, the bass line, and added the bajo sexto.

Q: How did two Albuquerque guys become the standard bearers for Tex-Mex?
Max: I grew up listening to norteño music, Tejano, and conjunto—the traditional sounds. My father was a professional accordion player who had a band. He was a big fan of Narciso Martinez [the South Texas accordionist known as El Huracan del Valle].

I started on accordion when I was 5 years old. My dad sat me on a chair and taught me “Polka Monterrey” and Glen Miller’s “In the Mood.” That kind of says it all about Texmaniacs. We do traditional conjunto, and we do rock ’n’ roll like John Fogerty and Doug Sahm.

Josh: I started out on accordion when I was 5. I watched my grandfather, my father, and my uncle performing. They would practice at my grandma’s all the time, and I just loved the music. My dad gave me a one-row accordion. I asked him, “Teach me.” He showed me do-re-mi-fa-so-la-ti-do in G. “Learn that and master that until you’re sick of it, so you never ever want to play that scale again as long as you walk on this earth.” I asked, “Why?” He said, “After you do that, you can play any song in the world.”

Q: The accordion maestro Flaco Jimenez made quite an impression on both of you.
Max: We saw Flaco on Saturday Night Live. I was 9 when my dad took us to Lubbock, which was the closest Flaco was playing at the time. He would sell out Friday, Saturday, Sunday—a thousand people a night. We got to meet Flaco. When I heard Oscar Tellez playing bajo sexto with him, I wanted to be like Oscar. Every time Flaco was in the area, we’d go see him. Flaco got us up on stage. We became such good friends, he’d stay at our house in Albuquerque.

Q: Flaco has told me Josh is his No. 1 protégé.
Josh: Every single time I see Flaco perform, it’s like the first I ever heard the accordion. I don’t know what it is. He does all the tuning and repair on my accordion. That’s his passion. It’s an honor to be able to see that. It’s special.

Q: How did Max get recruited to join the Texas Tornados?
Max: The Tornados were going to play at the New Mexico State Fair. Flaco called me, “Hey man, bring your bajo and sit in with us. Oscar isn’t in the band anymore. He got left behind in Chicago, he got so wasted.” Afterward, he said, “You sounded great. Why don’t you come to San Diego? You can do the West Coast tour with us.” We played San Diego, then San Juan Capistrano. They had a meeting the next day and called me into their room, and they each came up to me and said, “Hey man, welcome to the Tornados.” We played Bill Clinton’s inaugural ball, shows with Brooks & Dunn and Dolly Parton, Willie Nelson Farm Aids.

Q: What are some of your favorite Texas clubs?
Max: It would probably have to be Gruene Hall because of the authenticity of the old wood dance floor and low ceiling, and the vibe from all the legendary musicians that have been on the stage. The sound is just so good in there. Maybe my all-time favorite place was called Ruben’s Place in Selma [now closed]. It had the greatest jukebox in the world, nothing but the old conjunto 45s.

Q: What was the most out-there gig you’ve played?
Max: Liping in Guizhou province in China, for the Smithsonian in July 2014. We had played dates around China and Mongolia, but had three days off before we went back to the states. We flew into Guandong where we performed in a theater, then drove about seven hours south to this village that had been established to be a cultural center.

Josh: We did some serious hiking. We went to the very top of this mountain where you could see the whole village and more. This old man was sitting there smoking out of a pipe, looking at me like, “What the heck?” They’d never seen Americans. He asked me about my tattoos. I was feeling so spiritual. I said, “Man, I’m dreaming.” The man asked the tour guide what I’d said, and she told him what I said. He looked at me and told her something. He said, “Where you come from is a dream. This is reality.”

Max: When we play outside the United States, we say we’re representing American music. Then we get specific, that we’re from Texas, we’re Mexican Americans, and this is our music.