Diverse works converge at the El Paso Museum of Art 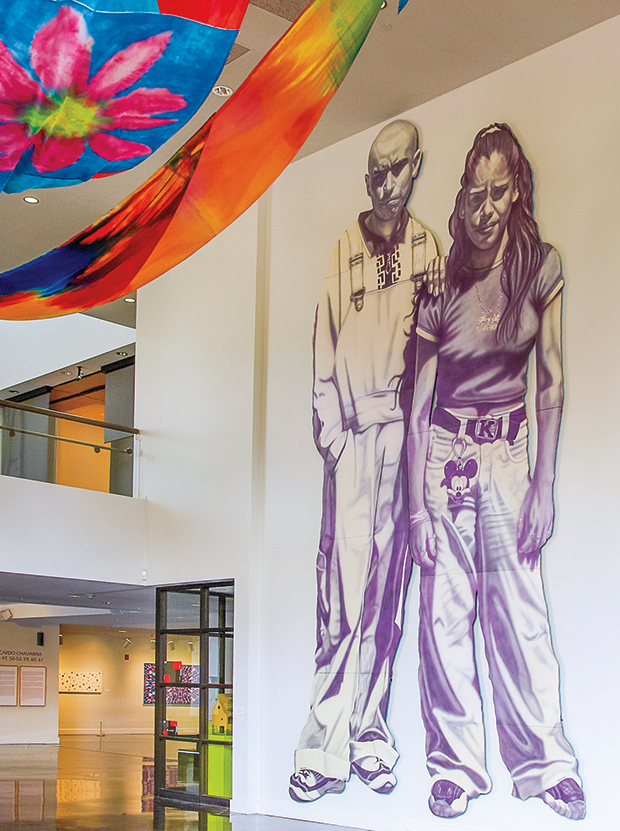 One of the museum’s most arresting works: a 24-foot couple airbrushed on aluminum composite panels by Gaspar Enríquez. (Photo courtesy El Paso Museum of Art, Collection of the City of San Antonio; photographer: Marty Snortum)

While drinking coffee in my room in El Paso’s hip new Hotel El Indigo, I can feel the pull of Mexico. From my window, I witness how the orderly concrete grid of El Paso’s downtown gives way across the border to a warren of pastel, one-story houses framed in mountains still purple from the sunrise. I watch cars scuttle back and forth toward the international bridge, heading for El Norte or south into Juárez. This is la frontera, a metropolis of almost 3 million people on both sides of the Mexico-United States border, and the buzz is infectious.

I have a shiny new book in my lap, a recuerdo from yesterday’s visit to the El Paso Museum of Art—the catalog companion to Gaspar Enríquez’s 2014 exhibit Metaphors of El Barrio. I have little space in my house for more art books, but this one had to come with me as a reminder of my experience.

When I first walked into the lobby, a powerful gaze had riveted me to attention. Here was one of the museum’s most arresting works: a 24-foot couple airbrushed on aluminum composite panels, hips cocked and brows faintly furrowed, the folds in their baggy pants rendered in a skilled play of light and shadow.

Enríquez created this couple in 1997 as part of a painting series for the San Antonio Convention Center. Although Enríquez painted them in shades of black and white, they appear electric and alive. A Mickey Mouse keychain dangles from her belt. His long fingers rest on her shoulder. And even though their eyes were two stories above me, I felt the power of their gaze.

Just as this towering couple hit me with a jolt of appreciation, the El Paso Museum of Art itself presents one revelation after another. Only a half-mile walk from my hotel through El Paso’s downtown, the museum welcomes visitors with a blaze of red outside: a sculpture of two connected triangles that look like an angular butterfly. This work by Peruvian sculptor Oswaldo Sagastegui is titled Identidad Geométrica, or Geometric Identity. I interpret the work as one side representing Juárez and the other El Paso, and they are meeting in the middle.

The museum, located in the United States’ largest border community, draws from the region’s many influences, which intersect and feed each other with new energy. For example, a docent told me that Tom Lea was his favorite artist in the museum. Lea, a prominent Western painter, muralist, and war correspondent, is a hero of El Paso’s cultural identity. The museum has a gallery dedicated to his works and hosts an annual, month-long series of events celebrating his life. One of the museum’s most beloved Tom Lea paintings, Sarah, shows Lea’s wife before a border landscape of cloud-topped mountains.

Lea’s rendering of his wife is strikingly similar to works by the late Manual Acosta, another local artist I discovered at the museum. Acosta, who was born in Mexico but immigrated to El Paso with his family as a young boy, painted portraits of women ranging from El Paso’s society ladies to grandmotherly señoras, often placing them against a vast desert background.

The works of Enríquez, Acosta, and Lea give me a better understanding of this mysterious corner of Texas. Because of its distance from other urban areas, the El Paso Museum of Art is uniquely positioned to tell the region’s story. Not only does the museum exhibit the works of well-known artists, but it also offers a prominent gallery to emerging artists. 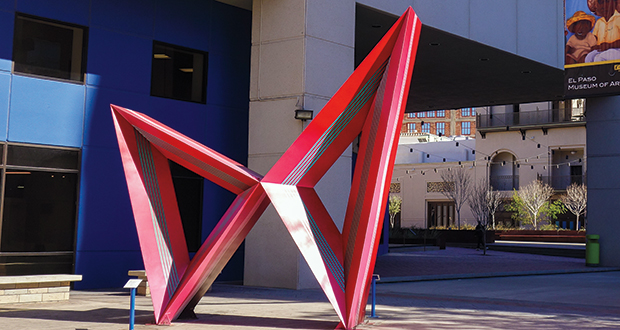 But appropriately, while the museum gives visitors like me a sense of place, it also gives locals a sense of the world. The same docent who admires the works of Tom Lea confided that his favorite painting in the museum is Italian painter Canaletto’s View of the Molo, which was made around 1730 and is part of the museum’s extensive Kress Collection. The painting highlights the canals of Venice with gondolas awaiting passengers, and I can appreciate how the watery scene could appeal to someone living in the middle of the Chihuahuan Desert.

I didn’t realize at the time that the Kress Collection was the genesis for the entire museum as it exists today. The Kress Five and Dime in downtown El Paso, which went out of business in 1980, was once one of the most profitable Kress stores in the country. According to Tracey Jerome, director of El Paso’s Museums and Cultural Affairs Department, the Kress Foundation agreed to donate 57 paintings from its enormous Euro-pean collection if El Paso would create a public museum to house them. Now the museum is home to Italian Renaissance and Spanish Baroque gems on par with works at the National Gallery of Art or The Louvre.

“Our Kress Collection is world-renowned,” Jerome says. “Our contemporary local artists grew up visiting that collection. That gift has had many profound ripple effects that continue to live and breathe in our community today.”

Those ripples keep widening throughout El Paso. The city’s prolific public art program installs local and international art into public spaces that reach the entire community. One of Enríquez’s larger-than-life portraits—of a boy in a baseball catcher’s facemask—now enlivens El Paso’s new baseball stadium, built in 2014 for the city’s Chihuahuas. In the fall, the city hosts an annual Chalk the Block party in the Arts District, a three-day arts festival with interactive installations, dance and theater performances, and a sidewalk chalk-art competition. And, to make sure that art remains accessible to all, donors sponsor bus trips to the Arts District from local schools. “Our feeling is that if we can get children in the door, they are often the entry point for the rest of the family,” Jerome says.

Back at the Hotel Indigo paging through the Gaspar Enríquez catalog, I read that Enríquez’s title for the Chicano couple series, Color Harmony en La Esquina, came from his hope that someday “color” could be a respected difference—something that creates diversity and enriches—rather than a source of bias. As the El Paso Museum of Art thrives as a hub of cultural exchange, bringing international art to El Paso while also bringing local art to the world, it brings that vision closer to reality one museum visit at a time.