Brushing up on History

A trio of Austin museums 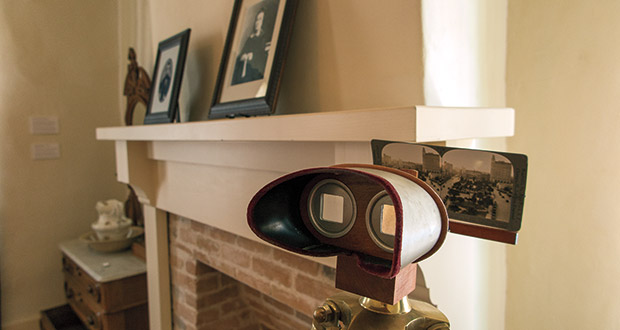 Visitors to the Susanna Dickinson Museum can view vintage Texas images through a reproduction stereoscope.

Within a few minutes’ walk of downtown Austin’s bustling Sixth Street entertainment district and historic Congress Avenue, a trio of museums at the city’s Brush Square offer distinctive windows into the Texas capital’s past. Visiting all three in one day, perhaps with a lunch break nearby at the Chez Nous French bistro or Carmelo’s Italian Restaurant—the latter housed in the historic Old Depot Hotel—makes for a well-rounded history lesson that touches on the Texas Revolution, American literature, and the story of Austin firefighting.

When Republic of Texas President Mirabeau B. Lamar appointed his old friend Edwin Waller, a veteran of the Texas War of Independence and a signer of the Texas Declaration of Independence, to plat the grid for the republic’s new capital of Austin in 1839, Waller reserved spaces for four public squares. The city today maintains three of the squares as parks. Wooldridge Square, at West Ninth and Guadalupe streets, is a 1.73-acre park that slopes down from the sides like a natural amphitheater-in-the-round. A gazebo bandstand, built in 1910, graces the center of the park and has hosted innumerable concerts, speeches, weddings, and other events. A few blocks south, at Guadalupe and Fifth streets, Republic Square hosts outdoor film screenings, a farmers’ market, and events of all sorts. Three stately live oak trees—known as Auction Oaks because lots in the new town were auctioned off beneath their shade in 1839—still stand here. Closed until spring 2017 for renovations, the park will feature a circular promenade around a central lawn.

The third, Brush Square, is a .73-acre park at East Fifth and Trinity streets. The still-active 1938 Art Deco Central Fire Station No. 1 anchors the park at Trinity and East Fifth streets, and within the station the Austin Fire Museum chronicles the heroism of the folks dedicated to keeping the capital city safe. Next door and also facing East Fifth, the O.Henry Museum interprets the career of writer O.Henry, born as William Sydney Porter. On the other side of the museum, the Susanna Dickinson home at East Fifth and Neches preserves the story of “the Messenger of the Alamo.”

Originally built at the southeast corner of East Fifth and Neches streets, the rock-and-rubble home of Susanna Dickinson and her fifth husband, Austin furniture maker/undertaker Joseph Hannig, was moved to Brush Square in the early 2000s and restored for its new life as a museum.

A native of Tennessee, Susanna had come to Texas with her first husband, Almeron Dickinson, who died at the Alamo. Spared by Santa Anna, Susanna was dispatched from San Antonio with her infant daughter Angelina and a slave known as Ben to inform Sam Houston and the Texian army at Gonzales of the Alamo’s fall. A 21st-Century painting in the museum, The Alamo Messengers by Bruce Marshall, vividly depicts the mournful trek.

When Susanna met Joseph Hannig in 1857, she was operating a boarding house in Lockhart. Some 20 years Susanna’s junior, Hannig built the Austin home himself. A maple bedroom suite in one of three exhibit rooms includes a chest with “J. W. Hannig, Pecan Street” stenciled in a drawer, and a quilt made by museum staff is signed by descendants of Alamo defenders. “Mr. Hannig was not happy about Susanna’s celebrity as an Alamo survivor,” confides museum docent Elyssa Browning. “Her account of the battle changed in various tellings through the years, so a fair amount of mystery about her remains.”

So much mystery remains that a planned exhibit, Who Is Susanna Dickinson? Myth, Memory, and Message, has been postponed until summer 2017. Until that show opens, visitors can enjoy an exhibit celebrating the 40th anniversary of the O.Henry Pun-Off, an annual battle of wordplay held each spring on the Brush Square lawn.

A 20-year-old William Sydney Porter headed west from North Carolina for his health in 1882. He worked on a ranch in LaSalle County, then moved to Austin in 1884. At some point, Porter lived part-time in San Antonio; he published his humor newspaper Rolling Stone in both cities. In the capital he also worked as a pharmacist, a draftsman at the General Land Office, and as a teller at the First National Bank. The last occupation got him convicted of embezzlement and sent to federal prison, though the question of his guilt or innocence has vexed literary historians for generations.

With his wife Athol and daughter Margaret, Porter spent about two years in the small Queen Anne-style house—with floors of long-leaf pine from Bastrop—that now stands on Brush Square. Eventually moved to the square from Fourth and Trinity, the house became Austin’s first public museum in 1934.

Visitors can see furnishings and other personal items, including Porter’s drafting table, county maps he drew, and the 1870s dictionary he brought from North Carolina. Audio played through an antique gramophone horn contains what some believe is the only recording of Porter’s voice. “Truth is indeed stranger than fiction,” notes the mystery speaker. “Use characters you’ve come across in your lifetime.”

In stories like “A Fog in Santone,” “The Last of the Troubadours,” and “Art and the Bronco,” that’s exactly what O.Henry did, transforming Texas people and places into literary art. Scholar Marian McClintock writes in the introduction to the 1986 collection O.Henry’s Texas Stories that his characters are “changed for the better by Texas” and that “their strength is bred into them by the land itself.”

There are perhaps no stronger Texans than the brave men and women who defy the demon’s breath of fire. The Austin Fire Museum, in two rooms of the still-working Central Fire Station No. 1, honors their sacrifice with photographs, artifacts, and firefighting equipment dating to the 1870s. A short 1952 home movie, shown in a video loop on a television screen, tells the story of the city’s first black firefighters, including Willie Ray Davis, who later became Austin Fire Department’s first black captain.

As if a working fire station isn’t enough to keep Brush Square from being a sleepy green spot, the museums host a lively series of concerts and other events. The O.Henry Museum sponsors discussions and reading groups, but the biggest party unfolds during the O.Henry Pun-Off World Championships held each May. “I’m a new man with a new outlook, and Iowa lot of that to you!” punned a recent winner in a state-themed category.

You can almost hear O.Henry groaning in his grave.