J.P. Bryan opened The Bryan Museum in Galveston in June 2015 to showcase his vast collection of artworks and historical artifacts. The founder and chief executive of Houston-based Torch Energy Advisers, Bryan has been collecting rare artifacts for decades.

To accompany a story in the December 2015 issue of Texas Highways about the Bryan Museum, Bryan took a moment to share his five favorite pieces in the museum. Our thanks to Bryan Museum Curator Andrew Gustafson, who gathered this input from Bryan and shared it with us.

This is Bryan’s favorite piece of art in the collection. Reaugh is one of Bryan’s favorite artists and this piece captures the spirit of the American West: a steer—tough and free—overlooking the Palo Duro canyon, undaunted by the size of it.  The Bryan Museum has Frank Reaugh’s ephemera collection, containing the artist’s personal and business correspondence, his sketches and sketchbooks, art reference books, as well as a large collection of his pastel and oil paintings.  The museum also has artwork completed by his students, known collectively as the “Dallas Nine.” Reaugh was called the “Rembrandt of the Longhorn” and sometimes the “Dean of Texas Painters.”

This collection is likely a one-of-a-kind, with envelopes and stamps dating from the Spanish Colonial era, the Republic of Texas, statehood, and the Confederacy. The collection contains some 1,000 philatelic and postal specimens, often with original letters corresponding to the stamped envelopes.

This engraved silver buckle set was awarded by General Francisco “Pancho” Villa as judge of a rough-riding competition in Mexico. The winner was “‘Reckless’ Bill Rodigqo.” It is a unique item that captures an unusual part of Villa’s character. Known as an expert horseman himself and sometimes referred to as the “Centaur of the North,” Villa would have been a skilled judge for a rough-riding competition. 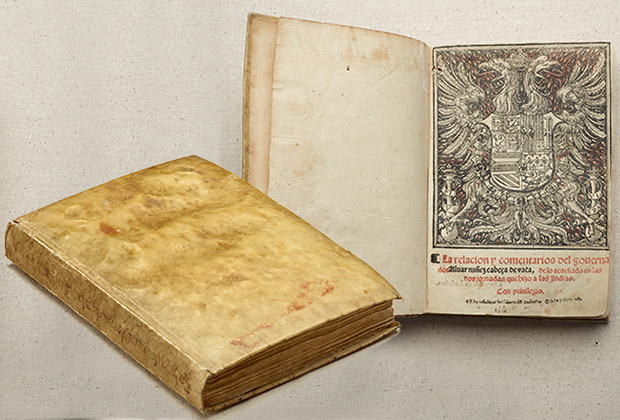 This vellum-covered book, a rare second edition printed in 1551 in Spain (first editions are unheard of), is the memoir of Álvaro Núñez Cabeza de Vaca, an explorer originally on a mission in Florida in 1528. His party escaped hostile Native Americans on rafts and floated to the Galveston Bay area. Of 300 men, only four survived, and they were captured and enslaved by the Karankawa Indians. Eventually they made their escape and walked to Mexico City, arriving there eight years later in 1536.  Cabeza de Vaca wrote about the entire experience, but the most significant portions of the work are his criticisms of the actions of Spanish missionaries and soldiers toward the native populations. He was the first Spaniard to take this critical stance, which earned him a trial for heresy by the Catholic Church in Spain. 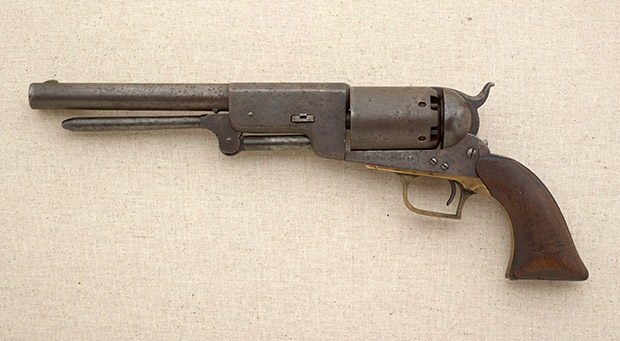 Stamped “B Company,” this .44-caliber revolver was used by Texas mounted soldiers during the U.S.-Mexico War (1846-48). Nearly five pounds, the gun was more powerful than its predecessor, the 1839 Colt Paterson revolver. Samuel Colt collaborated with Capt. Samuel Walker to design this firearm in 1846. The Walker was famously used by Texas Rangers in their battles against the Native Americans in Texas. The gun is often considered one that helped to “win the West.”