Art, music, cuisine—and a sense of whimsy—come together in downtown Winnsboro 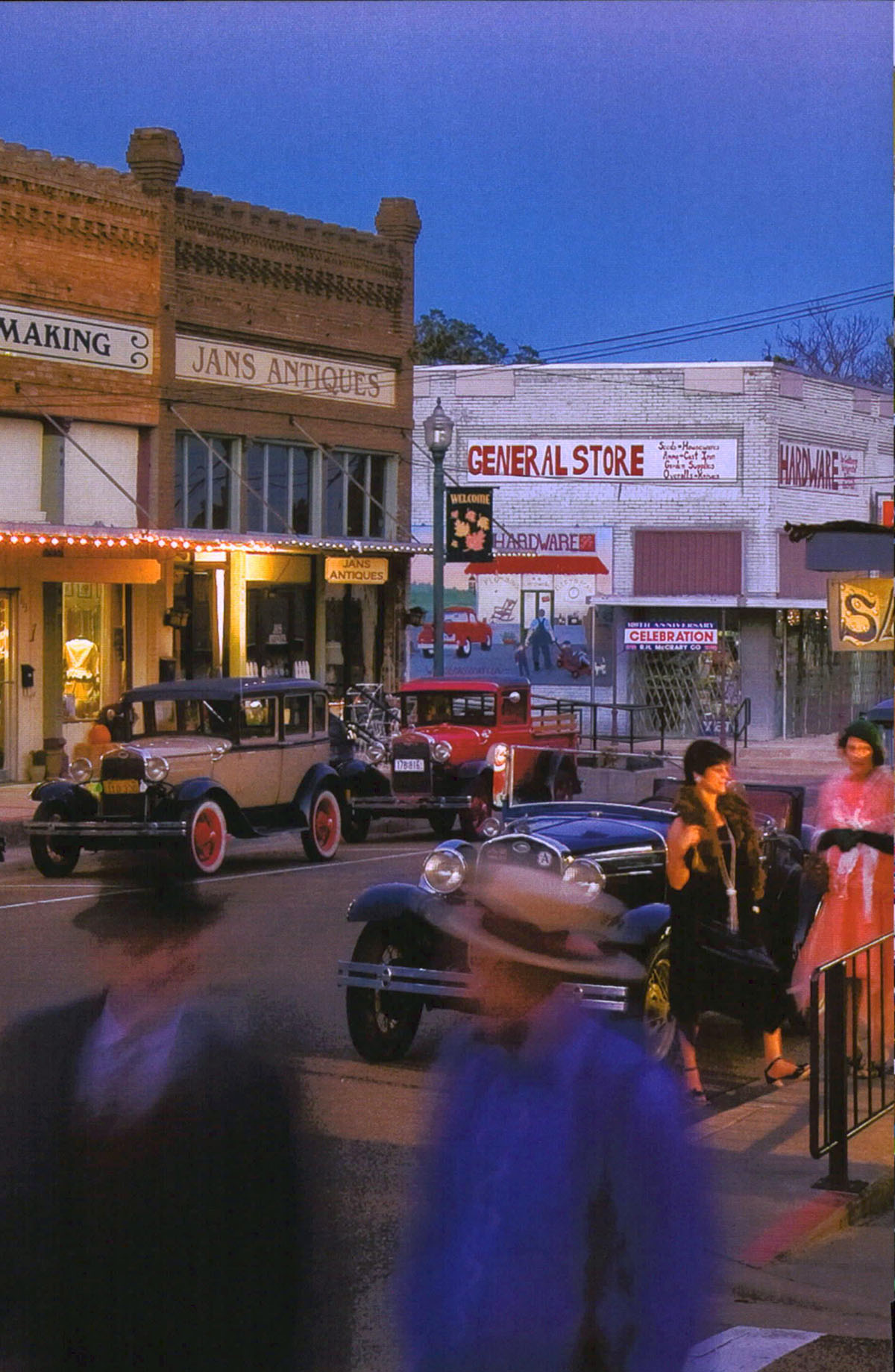 Winnsboro’s cultural arts district, centered at Elm and Market streets, takes on the air of a 1930s film set when Model-T clubs come to town.

When I think of Winnsboro, I think of fall color … or rather that’s what I used to think. 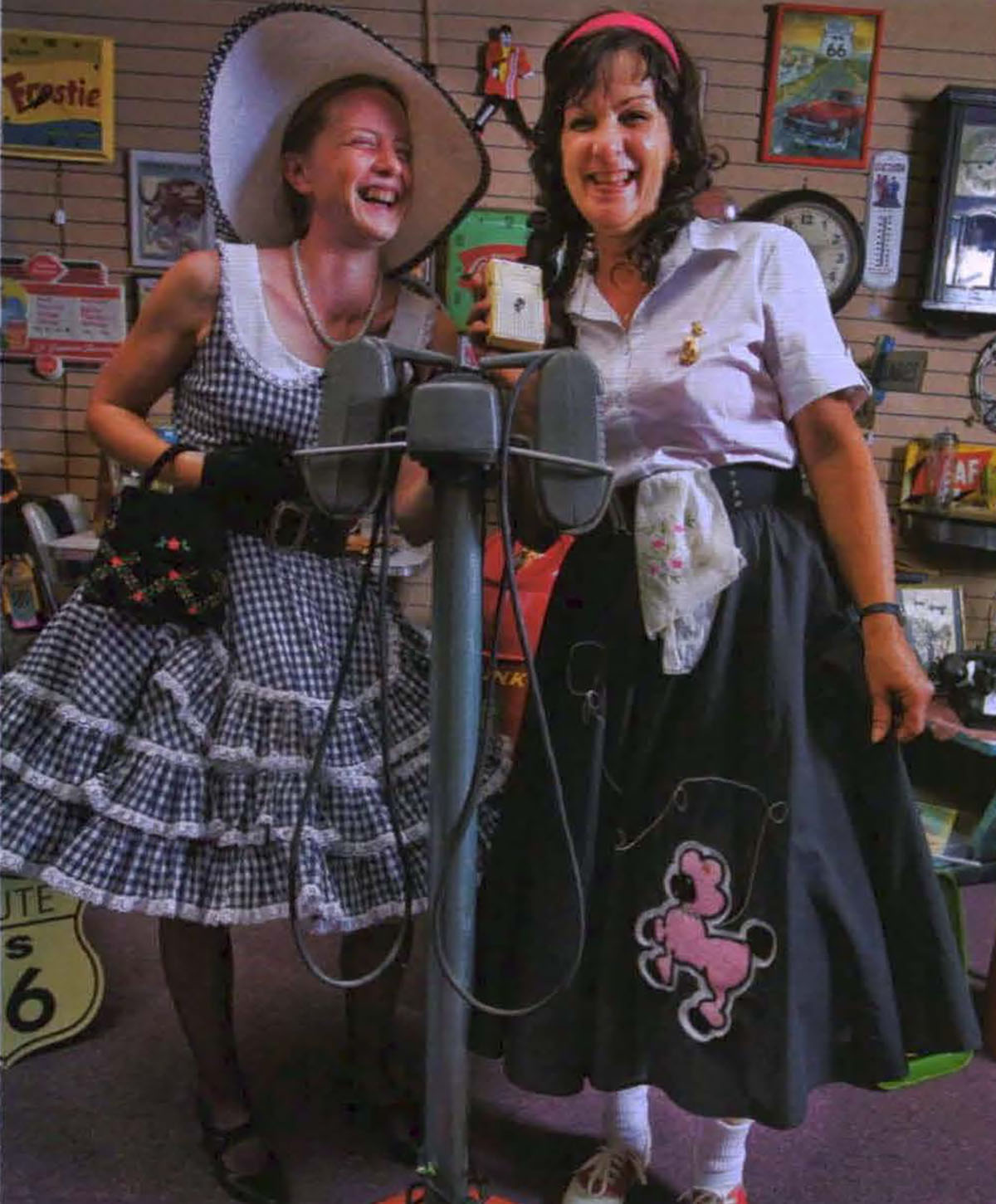 For years my family made lazy drives through colorful forests during Winnsboro’s Autumn Trails, still held each fall. A country café got us through the day, and Mother Nature provided the show, but the sleepy burg rolled up its sidewalks after five o’clock.

Recently a Winnsboro musician friend raved to me about his town’s rising cultural scene. I learned that the Texas Commission on the Arts named Winnsboro a “Texas Cultural Arts District,” the smallest (population of 3,500) of 16 designated towns where creative arts and culture boost economic growth. Then I heard that Winnsboro boasts a South African bistro/winery plus an Italian eatery so popular it needs no sign. That settled it. I had to check out downtown’s new penchant for art, music, and cuisine.

Much of downtown sprang up after the Texas Southern Railroad arrived in 1904. A century later, many of those buildings got a facelift when Winnsboro became a Texas Main Street City in the Texas Historical Commission’s downtown re­vitalization program. Some $12 million later, downtown’s spruced-up storefronts, reworked streets and sidewalks, and replica lighting offer a fresh yet nostalgic ambiance.

Each weekend, locals and out-of-towners rub elbows in two dozen or so shopping, eating, and entertainment establishments in the pedestrian­-friendly cultural arts district. ”We’re blessed with regulars from Dallas-Fort Worth who come to our area lakes;’ ex­plains Main Street Program Manager Denise Miranda. “That sophisticated market allows our shop owners to mix art and music with dining and shopping in creative ways.”

I begin my downtown jaunt at Market and Elm streets, the cultural arts district’s crossroads. The community, in fact, was known as Crossroads (where two frontier trails crossed) when town namesake and English immigrant John E. Wynn came in the 1850s. Market Street was called “The Bowery” by 1900 because of its saloons, brothels, and gambling halls. During the Great Depression, Bon­nie Parker got her hair coiffed here, and partner-in-crime Clyde Barrow snacked at local cafes.

Until Crossroads’ permanent home is remodeled, concerts take place next door at the Winnsboro Center for the Arts. The center opened in 2001 to bring visual and performing arts to this rural area. Art fever spread to many downtown shops and eateries that display local art for sale. The center’s informal gallery shows local paint­ings, sculpture, and photos, though one recent exhibit splashed into town with Surrealist works by Salvador Dali. An active theater group stages several productions a year. I catch an enjoyable Readers Theater version of Orson Welles’ famous 1938 War of the Worlds radio drama about a Martian invasion of Earth.

Another of Market Street’s former saloons is still a saloon-and restaurant-called Double C Steakhouse & Saloon, where I polish off a hand-breaded chicken-fried steak, loaded baked potato, and stout iced tea Then I take a peek outside as Karen and Randy Cason (who co-own Double C with son Justin Cason) put the finish­ing touches on their open-air patio. An elevated stage on one end hosts country-music bands on weekends,
as well as a quarterly Western murder-mystery dinner theater called Murder at Rattlesnake Gulch. (On March 14-15, 2013, a shootout reenactment at Double C is among several events, including historical tours, cel­ebrating Main Street Winnsboro’s 10th anniversary.)

A real-life shootout occurred at Market and Elm in 1907. Two lawmen battled two saloon keepers, and none were left standing. One of downtown’s several histori­cal markers pinpoints the infamous spot, located beside the pleasant patio of a bistro/wine bar called Liefie Li Vine. Owners Jackie and Phillip Strydom, natives of South Africa, opened Liefie (“sweetheart” in Afrikaans) two years ago and now offer made-on-site South African dishes with intriguing names. I chow down on ”Bunny Chow,” pecan-smoked chicken and wine sauce in a fresh-baked bread bowl. I’m tempted by ”Pasties” (chick­en or creamed spinach in a puff pastry) and ”Boerie Rolls” (hotdog-like sausages drizzled with sweet-hot “Monkey Sauce”). Liefie’s bar specializes in East Texas wines (soon including its own labels) along with its Liefie-Rita, a frozen wine margarita On weekends, the patio features live music overlooking Market Street.

It turns out that 3rd Fridays al o give shopkeepers and patrons an excuse to dress in costumes. On an elevated Elm Street sidewalk, I hap­pen upon Patty Moore in a poodle skirt dancing to the beat of ”Rock Around the Clock.” It’s a Fifties-themed Art Walk, and Patty’s antics pull visitors into her new antiques store, Patty Cake & Friends. Vintage oil-company signs and mounted marlins soar above antiques packed inside-ranging from a 1903 Eastlake barber chair and restored 1920s gas pumps, to an enameled wood-burning
stove and 1950s drive-in movie speakers. “We’re an antiquer’s antiques store,” says Moore. “And if an antique needs fixing, we fix it,” adds partner Steve Osborne, who con­serves and restores pieces on site.

Next door I wander into costume central at Silhouette Dressmaking. Proprietress Denise Marsoun is stitching not a dress, but rather a black captain’s overcoat for a man just shy of seven feet tall. Denise’s sewing skills attract historical reenactors and others seeking period-accurate garments. The shop looks like a clothing museum. A mannequin in Wild West duds stands next to another in a Renaissance gown beside another in a Civil War uniform. ”People even bring in historical photos,” she explains, “then I cut a custom pattern and make the new one-of-a-kind outfit.” 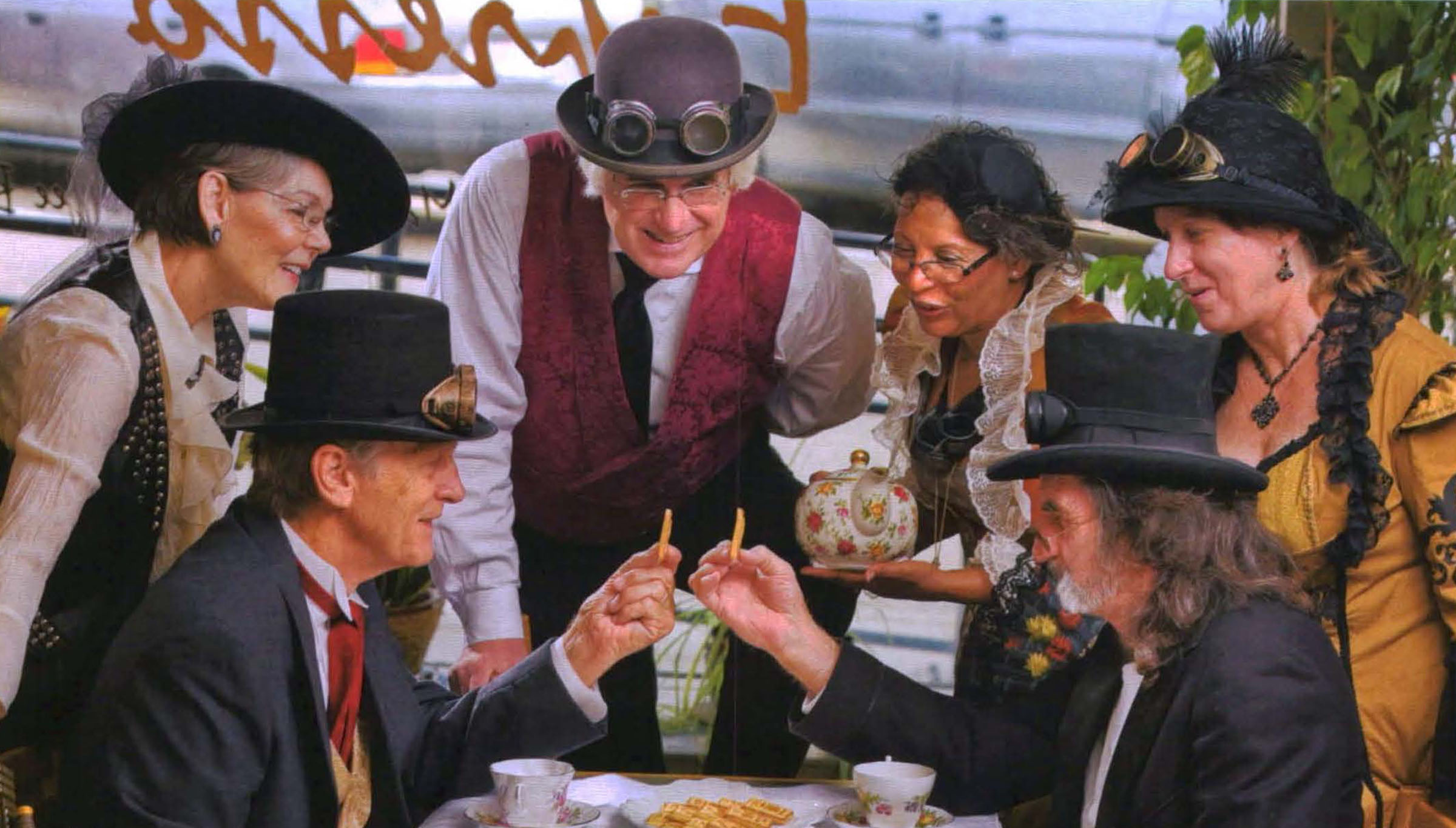 Light-hearted anticipation mounts as Steampunkers wait for the cookies to crumble during a tea duel at Art & Espresso.

Other 3rd Friday Art Walk themes include Western, Renais­sance, and even Steampunk. Steam punk? On Market Street at Art & Espresso, I encounter this offbeat blend of science fic­tion, Age-of-Steam technology, Jules Verne fantasy, and Vic­torian fashion. Coffee bar owners Jim Hollowell and Marilyn Arnaud normally serve hot and iced coffees and teas, along with pastries, sandwiches, and ice cream. Some 3rd Fridays they also host tea duels. Two Steam punk-dressed competitors face off, dip biscuits into hot tea, then hold them erect as they watch their cookies crumble. The winner is the last to mouth a whole biscuit before it breaks apart. ”It’s kind of like watching paint dry,” quips a Victorian-garbed Marilyn, “but it’s really hilarious.” (Steam punk is the theme for the 3rd Friday Art Walk on January 18.) 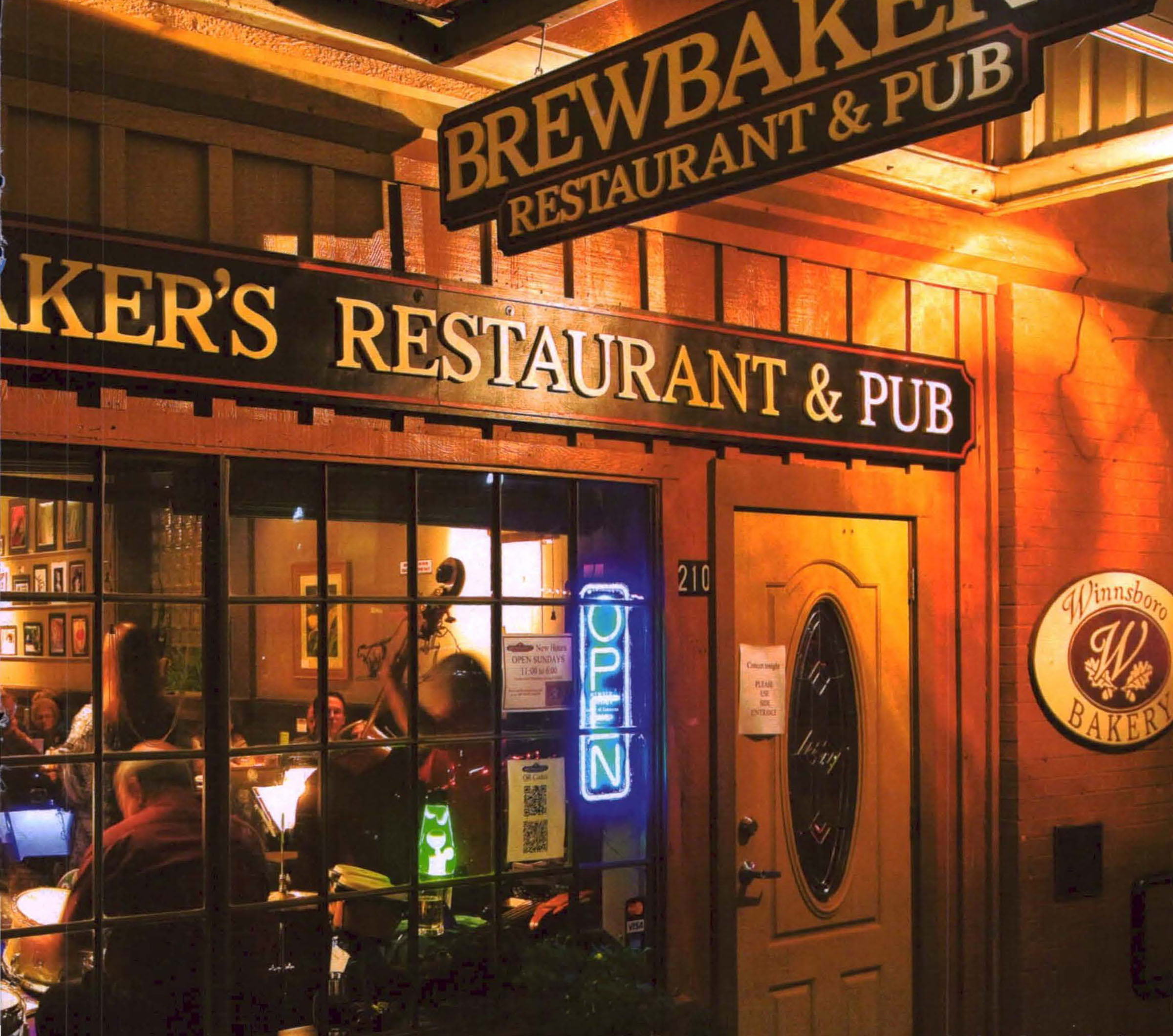 At a local hangout called Brewbaker’s Restaurant & Pub, ex­-Dallasite Jeff Heath, who bought and transformed the popular Winnsboro Bakery in 2004, has added a pub and beefed up the menu. The bakery still offers breads, pies, cookies, and cakes, and regulars rave about the lunch menu’s Philly Steak and French Dip sandwiches. But I go light and select a crisp, mixed­-green salad with apple-almond dressing and a scoop of chicken salad. I add a cup of spicy tortilla soup, and feel so sensible I order a slice of black-bottom banana-cream pie. Brewbaker’s dinner menu trends toward the likes of tilapia with mango salsa and marinated tenderloin with horseradish butter sauce. Weekends feature jazz, blues, rock, or singer-songwriter acts. The walls bear photos and paintings by local artists, and the pub boasts a sports-friendly 100-inch TV.

Later, as I walk down the sidewalk, I almost pass the popular ciboVino Italian restaurant. Outside, there’s no sign mounted on the century-old former department store. Inside, there’s dark wood paneling, a romantic wall mural, and a 44-foot, oak bar curving by two massive wood-burning stone ovens imported from Italy. ”We let our customers spread the word that we’re here,” says proprietor Rick Murray. I see why after cozying up to the bar. Folks next to me suggest Rick’s pit-cooked prime rib or the hand-layered lasagna prepared by Rick’s wife, Sharon. But on the recommendation of the Murrays’ 12-year-old son Brennan (himself an award-winning chef and ciboVino host), I start with a garlicky hummus and olive tapenade served on pita chips baked before my eyes. I follow with a creamy lobster bisque and crisp Caesar salad. My mushroom and sun-dried tomato pizza arrives bubbling hot on a tender crust Rick tossed only minutes ago. As a jazz pianist riffs in the background, I finish in fine style with a freshly flamed crème brûlée.

After a surprisingly busy Friday and Saturday in Winnsboro, I notice that downtown still pretty much rolls up its sidewalks on Sunday. But that offers me the chance, just like the old days, for a lazy, winding drive through pastoral hills outside town. Besides, there’s always next weekend, when Winnsboro’s cul­tural arts district rolls out another lively time on the town.