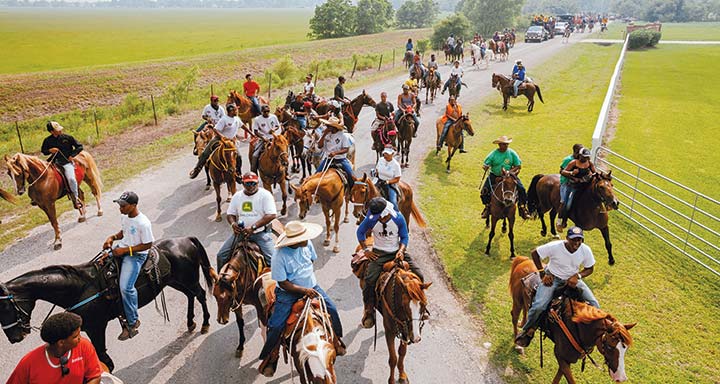 About three hundred horses, saddled and raring to go, tug impatiently at their reins as the Bill Pickett Zydeco Trail Ride gets underway near Beaumont.

For a schedule of upcoming zydeco trail rides in Texas and Louisiana, check out www.zydecoevents.com.

Two-dozen party wagons with big-box speakers blast the propulsive rhythms of accordions and washboards across the muster grounds. Revelers without horses scramble to borrow one or jump aboard a party wagon, laughing and dancing to the music.

After a prayer for safety and a final check for traffic, the pace car noses its way onto the rural Jefferson County blacktop and the trail ride rumbles to a cantering start. The equestrians and party wagons (mostly pickup-drawn trailers, elaborately customized), stretch into a half-mile ribbon, following the road through seven miles of coastal prairie pastureland. As the riders of all ages mosey along, shuffling to the music and doting upon the horses, bemused neighbors set out lawn chairs in the warm June sunshine to take part in this celebration of horsemanship, zydeco music, and Creole culture.

“It’s something that brings people from all over together,” says Marcus Semien, a Cypress resident who rides with his family’s group, Semien Stables, based in Orange. “And it brings my family together. We just love it. We love the horses, we love the food, we love the music. We love it all.” 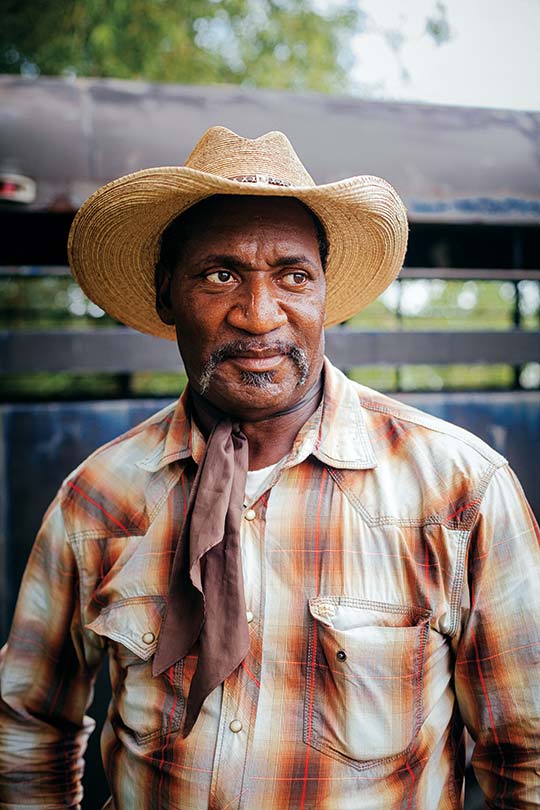 The Bill Pickett Trailriders’ annual Trail Ride, Zydeco Festival & Rodeo is one of hundreds of zydeco trail rides that take place across rural East Texas and Louisiana in the spring, summer, and fall. Rooted in Creole culture, the trail rides honor the heritage of African-American cowboys and the ever-evolving sounds of zydeco music. The Bill Pickett event—one of Texas’ most established, now in its 11th year—is held in the community of Cheek, about 10 miles southwest of Beaumont. Along with the trail ride, the June 12-14 weekend includes two rodeos and zydeco concerts on Friday, Saturday, and Sunday.

“What makes our trail ride different is we have the rodeo,” says Acynthia Villery, the event’s producer and founder. “A lot of our cowboys cross over from trail-riding into rodeo.”

The Bill Pickett Zydeco Trail Ride is named for one of the most famous black cowboys in American history. Willie M. Pickett was born in 1871 in the community of Jenks Branch on the Travis/Williamson county line, the son of former slaves, as historian Bailey C. Hanes recounts in his 1977 biography, Bill Pickett, Bulldogger: The Biography of a Black Cowboy. Growing up on the rural outskirts of Austin and in Taylor, Pickett excelled as a cowboy, including his innovative trick of subduing a wild steer by jumping on its back, grabbing its horns, and biting its lip. The practice was eventually dubbed bulldogging because Pickett learned it by observing cow dogs at work. Bulldogging evolved over time into the popular rodeo event known as steer wrestling.

Pickett showcased his cowboy and bulldogging skills at exhibitions around Texas and the West, joining the Miller Brothers’ 101 Ranch Wild West Show out of Oklahoma in 1907. Along with stars like Will Rogers, Pickett toured the United States, Canada, South America, and England into the 1920s, thrilling audiences with his unbelievable bulldogging. In 1932, Pickett died after being kicked in the head by a horse; he’s buried on the 101 Ranch near Ponca City, Oklahoma.

Pickett would feel right at home at the simple outdoor rodeo grounds at Laday’s Arena in Cheek, where, at the conclusion of the Saturday afternoon trail ride, spectators lean along the arena fence or sit on the top rung for a front-row view of the action. Cottonwood trees circle the perimeter of the dirt-floored arena, providing shade for spectators who set up lawn chairs; others take seats in the shaded bleachers. After a smaller rodeo on Saturday night with calf roping, steer wrestling, barrel racing, and ladies’ steer undecorating, the Sunday afternoon rodeo features those events along with bull riding, bareback riding, and team roping. For children, there’s a roping clinic, mutton busting, and a calf scramble.

The close-up view adds to the rodeo excitement. In the steer-wrestling event originated by Pickett, suspense builds as a cowboy attempts to back his horse into the box while waiting for a steer to dart out from the chute. In the ensuing pursuit, the cowboy leaps from his sprinting horse to wrestle the animal down as fast as possible, dust flying.

Most people in the African-American rodeo scene are familiar with Pickett’s legacy in the sport, says Brian White, a bullfighter/rodeo clown from Midwest City, Oklahoma, who’s participating in the Cheek rodeo for the second time this summer. One of only a handful of African-American bullfighters in the country, White has worked for 20 years protecting bull riders after they get thrown.

As the rodeo events unfold in the arena, zydeco bands play on the adjacent concert stage. Incorporating elements of rhythm-and-blues, soul, hip-hop, rap, and country music, the bands bring a mix of sounds to the one-third-acre concert tent. On Saturday nights, the crowd overflows from the tent as the floor fills with dancers. Dancing in couples or in synchronized lines, the dancers kick their feet and dip their shoulders in a distinctive zydeco shuffle, driven on by the infectious rhythm. Meanwhile, vendors selling smoked brisket, boudin, fried catfish, and chicken and waffles suffuse the grounds in tempting aromas.

Brian Jack, accordionist with Brian Jack and the Zydeco Gamblers, urges the dancers on with his six-piece band’s mix of traditional and R&B-influenced zydeco. Trail rides account for about 70 percent of the Houston band’s shows, Jack says, with the remainder at nightclubs, zydeco festivals, and church bazaars. In Texas, zydeco trail rides have supplanted church dances and zydeco festivals as the primary venues for live zydeco music, he says.

“The more popular trail rides are pretty much zydeco festivals with horses, especially when they have a line-up with five bands,” says Jack, who will perform on Saturday night at this year’s event. “There’s always something that’s going to keep zydeco going, but the music itself is not going to go anywhere. It’s been around too long.”

African-American cowboys have been around for a long time, too. Joseph Bushnell, a cowboy, horse trainer, and Pentecostal preacher from nearby Nome, subscribes to the 19th-Century cowboy tradition with his straw hat, brown neck kerchief, leather chaps, and jeans tucked into tall boots. Bushnell was raised on horseback, he says, as are many children in this part of Jefferson County. As a horse trainer, he brings horses that he’s gentling to zydeco trail rides to acclimate them to crowds of horses and people.

“They get so antsy, they get so wired up being in a stall, and sometimes you just got to give your horse something else to do, something different, and just let him relax and be a horse,” Bushnell says.

Trail riding, rodeo, and horses are equally important and beneficial to people, Bushnell says, especially young people facing troublesome temptations in today’s world. Bill Pickett and his pioneering spirit are worthy reminders of life’s possibilities. “He’s a great inspiration for young cowboys,” Bushnell says. “It sends a positive message and lets a person know that you can overcome all odds to do whatever you set your heart to do.”