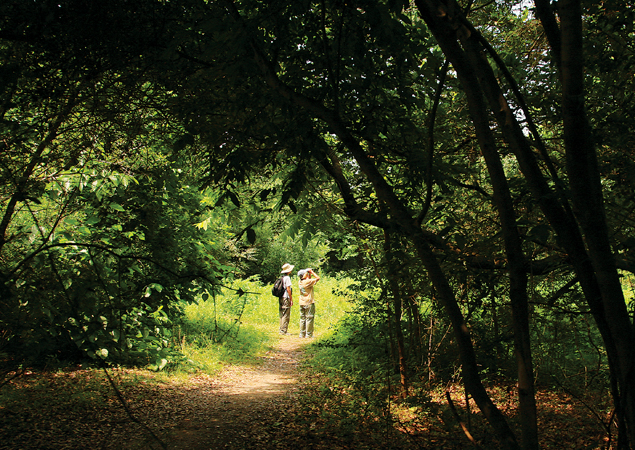 Somewhere in the Piney Woods north of Beaumont, a 12-passenger van barrels down the road. Mud splatters cover its windshield and dirt cakes its sides. Duffel bags, rain boots, ice chests, cartons of sodas, boxes of crackers, packages of energy bars and cookies, and cans of mixed nuts crowd the interior. Driver Bill Baker, manager of ecological programs for Reliant Energy in Houston, deftly maneuvers to the side of a tree-lined road, and the four occupants pile out and scatter. A few seconds later, a whistling call emanates from among the tangle of pines, sweet gums, cedars, and hackberries. The team members glance at each other, nod, and jump back into the van. Moments later, Baker is heading down the two-lane highway in pursuit of the next bird species on the list.

It’s another typical day of the Great Texas Birding Classic, a pumped-up version of an otherwise leisurely and relaxed hobby. The Classic is one of the biggest and longest birding competitions in the country—the birdwatching equivalent of the World Series or Super Bowl. No surprise that it happens in Texas, where you’ll find 634 species of birds and plenty of spirited birdwatchers.

The competition’s late-April to early-May timing coincides with the migration of millions of birds through Texas’ coastal region, a phenomenon repeated in reverse in the fall.

Sponsored by the Gulf Coast Bird Observatory and the Texas Parks and Wildlife Department, and open to anyone, the Classic includes regional 24-hour counts for adults and teens age 14 to 18, an eight-hour tournament for young kids, and a 24-hour, in-place count (a.k.a. the Big Sit!, in which a team occupies a 17-foot-diameter circle and lists all birds seen and heard). But the toughest category—a five-day adult competition spanning the entire coast—attracts the truly dedicated. In 2008, Baker and his Reliant Energy Environmental Partners team covered nearly 3,000 miles, from the Rio Grande to the Louisiana border, and logged 316 species, to take last year’s title. After participating in all 12 Classics thus far, the team now has four consecutive wins in the category. Its highest tally: 340 species in 2006.

To get these kinds of numbers, teams begin their days before dawn and end them well after sunset, with meals grabbed on the run or skipped altogether (hence the van’s stash of snacks). Participants prepare for the competition with spotting scopes, high-powered binoculars, hefty and well-thumbed birding guides, CDs of birdsongs, and a wealth of accumulated avian knowledge. It’s all important: A good percentage of birds are identified by their calls. Sightings are often little more than quick glimpses—was that a black hood or a black cap?—and with this many species involved, details matter. Long, heated debates over whether a bird was one thing or another are common. In other words, you need to know your Wilson’s from your Orange-crowned Warblers, females from males, young from mature—whether presented with a picture-perfect specimen or one that just flew through some rough weather and is having a bad-feather day.

Tom Roberts, engineering manager for Reliant’s Seward Station in Pennsylvania, served as Team Reliant’s copilot and meticulous record-keeper in 2008 for his eighth Classic. Last year’s event marked the third for two other team members, Lalise and Greg Mason of Houston.

In 2008’s one-day adult competition, the first-place team identified an astonishing 211 species. Regular competitor Richard Gibbons, currently a Ph.D. candidate in biological sciences at LSU, says the 24-hour event is intense in its own way. “If you miss an opportunity, you’ve missed it,” he explains. “It’s a
logistical challenge. You’ve got to figure out a maximum number of species and habitats, and the shortest route to get them all.” Gibbons started birding after college when he observed scientists studying bird migration using a mist net. “I was struck with how birds migrate between continents and the challenges they faced,” he says.

A teenage team called the Towhees, which competed on the upper coast last year, ended up on Bolivar Point beach Saturday afternoon, the same time as the Reliant team. Baker and company had just spotted a rare pelagic bird hanging out with the usual gulls and terns.

“A predator flew over and all the birds scattered, and it was obvious this one was something different,” Baker says. “We watched it fly, then when it landed, we repositioned ourselves to get a clearer view. We got out our field guide and finally identified it as a Pomarine Jaeger—a large sea bird capable of impressive aerial maneuvers.” The adults pointed the bird out to the youths, who were able to return the favor when their photos helped identify the bird for the competition. “Their picture was a good backup for us,” Baker says. “When you see a bird out of place like that one, your mind kind of plays tricks on you. You have to pay attention to details to assure yourself that what you are seeing is what you think it is.” Both teams were quick to say that such  sportsmanship commonly prevails in the Classic.

“That Jaeger was a ‘life bird’ for everyone on our team,” says Towhee team member Christian Walker, 17, referring to a species that a birder hasn’t seen  before. “You almost never see it. Seeing one in May on the beach is pretty special.” Walker and his twin brother, Austin, used a powerful spotting scope to note the bird’s field marks—bill size, mottled and diffuse breast band, and black cap extending past the bill and throat.

“When you see something and have no idea what it is, you realize how much more you need to learn,” says Christian. “With woodland birding, you have to know the songs. Down at the coast, though, you can see the birds. We probably saw 80 percent of the birds on our checklist.” His team’s total was 191 species, he says, “pretty darn reasonable for a one-day thing.”

Youth teams are typically organized by science teachers or scout troops, and often assisted by a local Audubon chapter, as the Towhees team is, says Carol Jones, education program manager for the Gulf Coast Bird Observatory. That is just one way of enabling the less-experienced to participate in the Classic.

“If people don’t have experience, we can match them up with mentors,” Jones says. After all, the idea is to promote birding in general and the Great Texas Coastal Birding Trail in particular, and to raise funds for conserving bird habitat. So, the more the merrier. Welcome aboard.

Along with those 316 birds sighted in the five-day adult competition, and 211 in the one-day match, 136 species showed up for 2008’s Big Sit! count. The Energy Saver Competition, new in 2008, recognized the most species spotted per mile driven: 3.34. Jones says the Energy Saver category will definitely be part of future competitions. “The Classic is all about conservation, so we wanted a category that minimized the environmental impact of the competition itself. It’s a challenge for teams to come up with a strategy and the best route for the Energy Saver.”

With these impressive numbers to inspire you, pack the binoculars on your next trip, and take a moment to look and listen for Texas’ feathered residents. Start counting. If you’re feeling lucky, sign up for the Classic. Baker’s team is hard to beat, but trying is part of the fun.