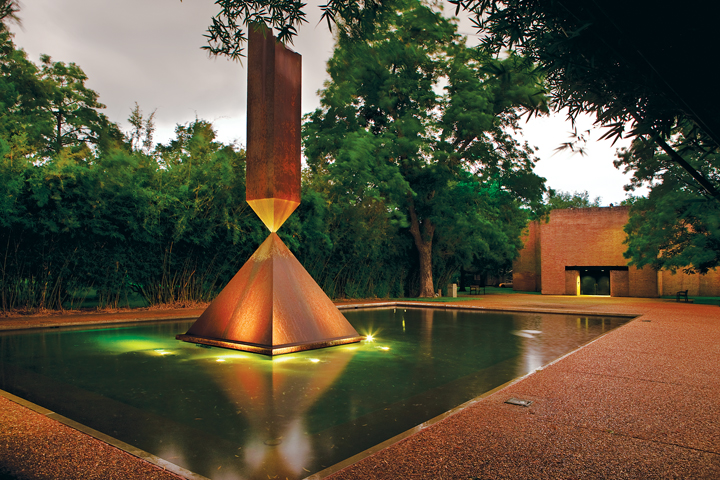 The best treasures are often hidden, and sometimes the best place to hide them is in plain sight. Thirty years ago, when Dominique de Menil began implementing plans for a museum to house the art collection she and her husband, John, had assembled over four decades, she met with the Italian architect Renzo Piano (who had caused a sensation with the Centre Pompidou in Paris), and asked him to design a building that would blend in with the blocks of modest, gray-and-white, 1920s bungalows she owned in Montrose, one of Houston’s established inner-city neighborhoods. A generous and understated woman known in Houston for wearing a mink coat inside out, Mrs. de Menil explained that she wanted the museum to look small on the outside, but be as big as possible on the inside.

To fulfill Mrs. de Menil’s request, Piano designed a neighborhood-scale, block-long, cypress-sided building that appears to float above the lawn. Surrounded by the arts-and-crafts bungalows (all painted the color that has come to be known as Menil gray), the serene, elegant building is considered one of Piano’s best. This distinction is appropriate for the Menil Collection, which ranks with the great private museums in the United States—the Frick in New York City, the Gardner in Boston, and the Phillips in Washington, D.C. The Menil continues to build its collection, and now includes multiple buildings scattered across a 40-acre campus that is woven smoothly into the fabric of the Montrose neighborhood.

The Menil’s director, Josef Helfenstein, describes the Menil as an “oasis within the city.” The Menil, he says, “gives visitors a friendly, completely unmediated experience of the art. There’s nothing noisy here. We’re not interested in putting on blockbusters. There are no long lines. Nothing stands between the viewer and the art. The way the museum fits into the bungalows and the fabric of the neighborhood—there’s no other place like this in the world.” 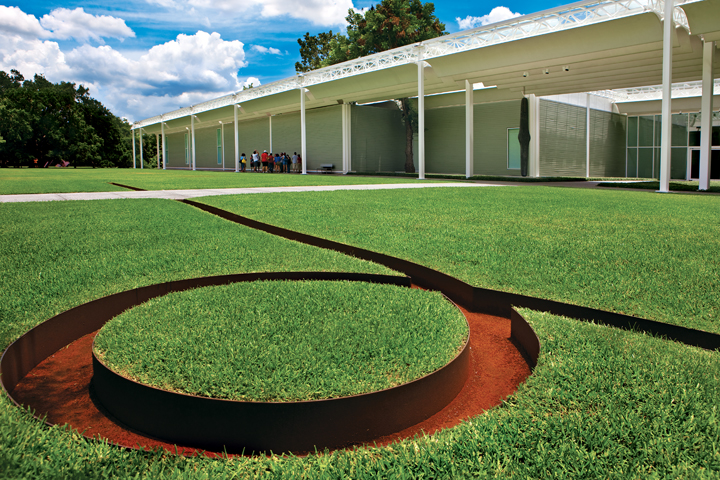 The primary entrance to the Menil’s main building is from Sul Ross Street. You won’t see banners or big signs. Staff members note that visitors occasionally pull to a stop alongside the museum building and ask “Where is the Menil?”A broad sidewalk leads to a long porch that runs across the front of the building. The façade is gray cypress; the steel beams are painted white. The louvered roof looks something like a very large Venetian blind stretched horizontally to tame the Texas sunlight for the interior galleries. Dominique de Menil wanted visitors to see the art as she enjoyed it in her light-filled home, with the light changing throughout the day. And entering the museum is a bit like entering someone’s house. There’s no admission fee, no gift shop, just a simple desk on  one side of the room where a staff member awaits questions. Beyond the main foyer, another room leads to a secondary entrance onto Branard Street.  A long hallway leads in both directions toward the museum’s galleries.

Dominique and John de Menil began collecting art after moving from France in the 1940s to establish the Houston office of Schlumberger Ltd., an oil field services company. Her father and uncle collaborated to invent an electronic sounding device that, when lowered into the borehole of a well, would reveal the composition of minerals beneath the surface. As CEO, John de Menil managed Schlumberger Ltd. (established in France in the 1930s) as it grew into a giant international corporation with its headquarters in Houston. Mrs. de Menil would later say that they were inspired to collect art by what they didn’t find in Houston. They bought work by Picasso, Cézanne, Braque, and Matisse, and began assembling a collection of surrealist pieces that featured Magritte, Duchamp, and Max Ernst. The Menil now houses collections of classical, medieval, Byzantine, African, Northwest Coast, surrealistic, and contemporary art. The museum’s curators mount exhibitions from approximately 16,000 objects that rotate through galleries from on-site, upstairs storage vaults known as “treasure rooms.”

I usually gravitate toward the Surrealist and contemporary paintings when I’m at the Menil, but, this time, I entered one of the unmarked exhibition spaces, where I found myself in the world of ancient Greece and Rome, looking at vases and amphorae, busts and small statues. In the next room, my eyes were adjusting to a piece of medieval European art, a 14th-Century French virgin with child, when I received a slight shock, catching sight of a large female mannequin bolted facedown into a packing case. The untitled work was by Maurizio Cattelan, a contemporary Italian artist who is known as a prankster.
The Menil, which is extremely open to artists and is much loved by them, had invited Cattelan to “raid the attic.” Cattelan had assembled an exhibition from the permanent collection in a gallery at the far end of the museum, but dropped some of is own work into the other galleries as little artistic tripwires. In a contemporary gallery filled with Rothkos, Rauschenbergs, Johnses, and Warhols, Cattelan had hung another of his pranks, a canvas that looked
as if it were being defaced or even ruined by the handle of a mop leaning against it.

I strolled through a third gallery of African and tribal art that, juxtaposed against an atrium filled with lush tropical plants, made me feel like I was inside a Gauguin painting. Then, I decided to take a break. Forty minutes is about as long as I can really concentrate on and respond to art, so the Menil is ideal for me. Not only is it relatively small, but it’s easy to come and go. I considered getting a cup of coffee in the Menil bookstore, which occupies a bungalow on Sul Ross across from the museum’s main entrance, but instead, I walked out the opposite side of the building to Branard Street, where signs pointed me toward the Cy Twombly Gallery, the Rothko Chapel, and the Byzantine Fresco Chapel.

The Twombly Gallery, a scored concrete building, looks like a Roman vault facing away from the street toward its own small lawn shaded by a magnificent live oak. Cy Twombly, an American abstract expressionist who has lived much of his life in Italy, made sketches for the gallery, which was designed by Piano and opened in 1995. It is an unusual museum dedicated to a living American artist. When you walk into the lobby, you’re immediately struck by the  soft glowing light filtering down from the roof through panels of white sailcloth stretched wall-to-wall above each room. The largest of eight rooms is dominated by one monumental painting on three canvases. This is an extremely intimate, “unmediated” experience of one artist’s work.

If you continue on Branard, you pass Menil Park, where people from the neighborhood hang out and play Frisbee under big live oak trees-an ideal spot if
you want to have a picnic. On the far edge of the handkerchief-size park, beyond a screen of bamboo, you’ll see Broken Obelisk, a three-ton Cor-Ten steel sculpture by Barnett Newman that is dedicated to the memory of Martin Luther King, Jr. The sculpture appears to hover over a long reflecting pool that faces the Rothko Chapel, a small octagonal brick building.

The de Menils treated the arts, religion, and social justice as part of the same continuum. In 1964, they commissioned Mark Rothko to paint 14 large canvases for the chapel, which was dedicated in 1971 as an ecumenical sanctuary. The Rothko isn’t formally part of the Menil Collection, but it occupies a special corner of the Menil campus, and also remains free and open to the public. Philip Johnson, the original architect for the Rothko Chapel, designed the de Menils’ house in River Oaks, which was an early Johnson commission and the first modernist house in Houston. Johnson would  eventually design major modernist and post-modernist buildings in Texas, but he resigned from the Rothko project because of disagreements with Rothko over how and where sunlight would enter the building. Today, the interior of the chapel feels as resonant and mysterious as an ancient cave, with dim light filtering down from above. And here you can participate in the mystery of how great art can both live and die. Rothko’s enormous dark canvases today look oddly flat and lifeless.

On the next block, just past Yupon Street, I followed a path to the Byzantine Fresco Chapel Museum. A wall of rough stone suggests the original church that thieves looted after Turkish troops invaded Cyprus in 1974. Mrs. de Menil rescued the 13th-Century frescoes from the black market in Germany, and, in an agreement with the Church of Cyprus, had the frescoes restored in London and shipped to the United States, where she commissioned her son Francois de Menil, an architect, to design a chapel for the frescoes. A sign just inside the door says, “Please pause. Allow your eyes to adjust to the lower light level.” The interior is theatrically dark; arches of opaque glass suggest the presence of the original chapel enclosed within a protective black vault.
The frescoes glow jewel-like in the dome and apse of the consecrated space.

To appreciate the breadth and depth of the Menil Collection, take a short walk to the southern border of the campus, where you’ll find the annex exhibition space known as Richmond Hall, built in 1930 as a grocery store. Mrs. de Menil commissioned Dan Flavin, the minimalist sculptor, to design a permanent installation, which he completed just before he died in 1996. Don’t be misled by the minimal label. Walking into Richmond Hall is a retinal feast. Alternating blue, green, yellow, and pink fluorescent tubes undulate down opposing walls, the light reflecting off the polished cement floor. This is a 3D extravaganza, a painting you can walk into.

From the December 2010 issue