The Galveston Legend of the Infamous Pirate Jean Lafitte 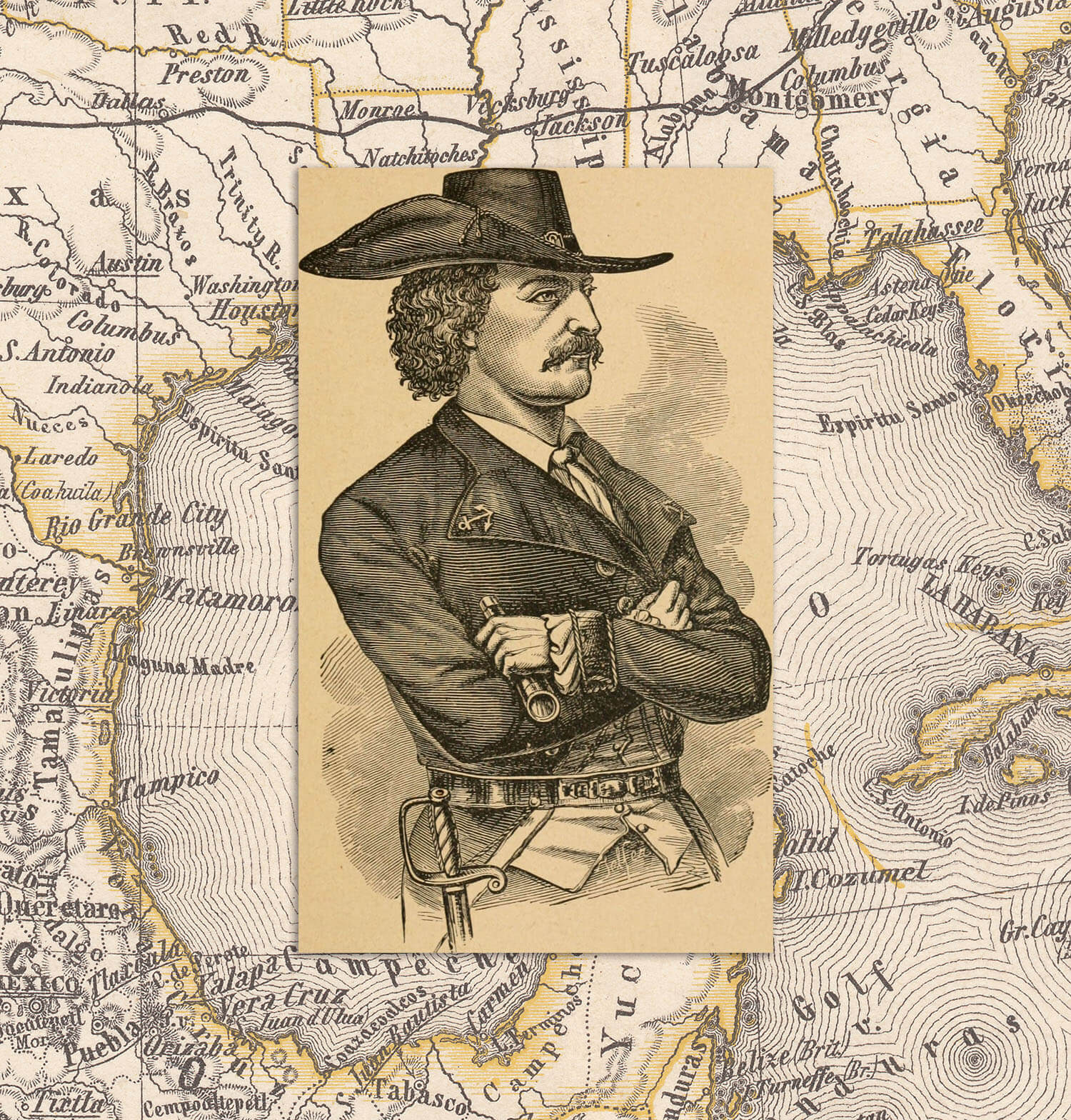 On Galveston Island’s east end, behind a rusting chain-link fence, the concrete bones of an old structure sit between a residential home and a metal-sided warehouse. Aside from a state historical marker out front, there’s little sign this overgrown lot was once the encampment of Texas’ most infamous pirate, Jean Lafitte.

From 1817-20, Lafitte headquartered his smuggling business on Galveston Island, which was then part of Spanish Texas. He and his older brother, Pierre, patrolled the Gulf of Mexico as pseudo-agents of New World governments that had revolted against Spain, exploiting the naval routes that linked the Gulf Coast to the rest of the globe.

“There’s a real cachet about pirates, even if the legends take on a life of their own,” says Stephen Curley, a retired English professor from Texas A&M University at Galveston who lectures about Lafitte. “The legends and lies and truths about Lafitte are great fun, but some of the reality is pathetic and tragic.”

Nothing remains of Lafitte’s old Galveston village, which he named Campeche, because he burned much of it when fleeing the island under pressure from Louisiana Gov. William Claiborne. The crumbling arches and steps now occupying the lot on Harborside Drive had nothing to do with Lafitte—they were part of a home built decades after the pirate died. Still, one can imagine his dashing figure on the humid coastline directing boat raids, steering ships into the natural harbor, and sorting booty he raided up and down the Gulf Coast.

“He was very handsome and gentlemanly—suave, well dressed, charming, and charismatic,” says Lou Graves MacBeth, vice president of the Galveston-based Laffite Society, echoing the portrayals found in historical depictions. “The women loved him. He could get them anything they wanted and sell it to them cheaper than merchants.”

Except for a few letters and accounts from contemporaries, and some notarized documents in New Orleans, where Lafitte conducted much of his business before moving to Galveston, hard facts about Texas’ most famous smuggler remain elusive. “Outlaws don’t keep good records,” Curley notes.

Historians believe Lafitte was born in France, or possibly the Caribbean island of Hispaniola, around 1790. He spelled his name Laffite, but English documents switched the spelling to Lafitte, and it stuck. He began his criminal career in New Orleans around 1805 when he worked with Pierre to peddle stolen goods. Though he’s remembered as a pirate, he was late to the game; the golden age of piracy had fizzled a century earlier under pressure from the British navy. Lafitte acted more like a mob boss than a sword-wielding swashbuckler, even though paintings sometimes depict him wearing a plumed hat (he probably didn’t).

“I don’t think there was any walking of the plank in the days of Lafitte,” Curley says. “Those swashbuckling tales are the stuff of Robert Louis Stevenson.”

The Lafitte brothers eventually moved their headquarters to Barataria Bay, in the swampland south of New Orleans. As a privateer—an agent for hire—Jean held a “letter of marque” from Cartagena, a port on the coast of Colombia. It gave him a flimsy guise of legality to board Spanish ships and seize their cargo, which he then sold at auction. Louisiana officials didn’t approve of the Lafitte brothers’ ways, but they were popular among the citizenry because their goods were inexpensive. And after Lafitte and his men aided American forces in the Battle of New Orleans, the last major clash of the War of 1812, U.S. President James Madison granted him a pardon.

Lafitte kept up his smuggling after the war until pressure from authorities forced him to leave Louisiana and move to the windswept sandbar of Galveston in 1817. Ousting a few other low-rung smugglers in the process, he established Campeche. His home, reportedly painted red, was dubbed Maison Rouge. 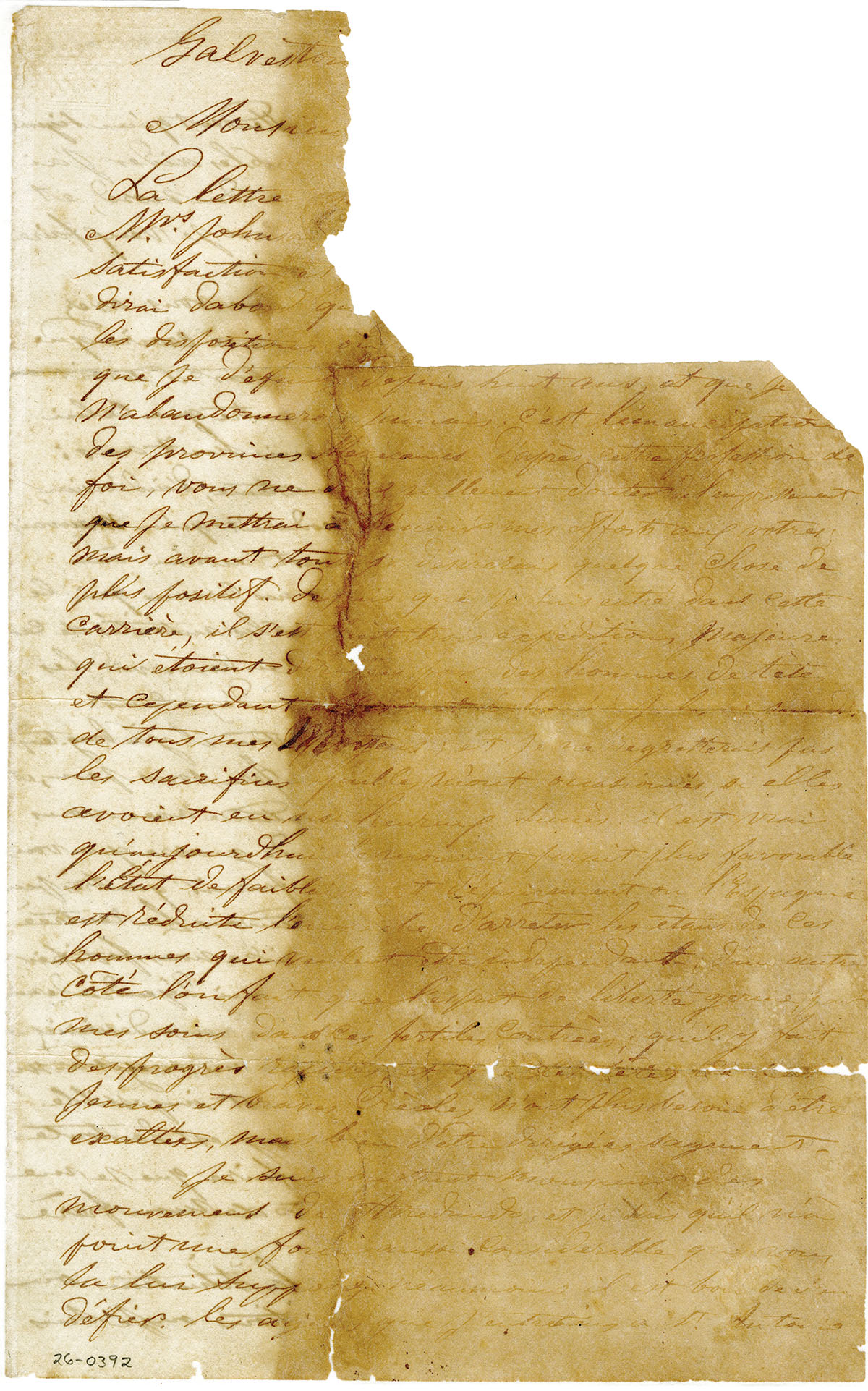 An estimated 1,000 people, mostly men, lived in the encampment at its peak, Curley says, but in 1818 a storm swamped much of the island and destroyed many of Lafitte’s ships. In 1820, after one of his men raided an American ship, the U.S. Navy evicted him again. Lafitte set sail, perhaps for the Yucatán, and survived for another few years before he died around 1823. Historians differ on the cause of his death: Theories include fatal injuries in a battle with Spanish merchant vessels and illness.

Today, Lafitte is remembered romantically in Galveston, where costumed “Lafittes” stroll The Strand during Mardi Gras. In the early 1900s, the Galveston Pirates took the field in minor league baseball, and pirate references pop up all over the island. A gay bar called Robert’s Lafitte has been around for 45 years, while builders tag their developments with names like Chateau Lafitte Townhomes and Laffite’s Cove.

At the Pier 21 Theater in downtown Galveston, a short film called The Pirate Island of Jean Lafitte shows daily and explores the contradictions of a man who plundered ships but is beloved as a daring buccaneer. On The Strand, a small museum called Pirates! Legends of the Gulf Coast draws tourists to its gallery, which chronicles Lafitte’s life story and connection to the area. It also features a replica pirate ship, where actors portraying pirates mingle with guests. Ghost hunters have been known to pay nighttime visits to the Harborside Drive lot where Maison Rouge allegedly stood. They tell of unexplained sounds of arguing, gunfire, and a pack of howling dogs, thought to be the spirits of animals provided by a voodoo queen to protect Lafitte’s home.

But historians say some of Lafitte’s background has been sugarcoated in popular culture. For example, Lafitte participated in the slave trade, selling humans he had captured on ships. “Lafitte made much money trafficking in human lives,” Curley says. “He worked in the slave trade, and that was the most lucrative trade of all. That’s the kind of story that just doesn’t get told much.”

Lafitte’s work took him up and down the Texas coast, creating legends along the way. Many of the stories involve hidden treasure, and Galveston is ground zero for such tales. In one, an unidentified skull in an antiques shop holds clues to where Lafitte’s treasure is buried. In another, the treasure is buried at a place once called Three Trees, near the Pirate Beach community.

“Any place you could put a boat in, every single coastal area from Matagorda to New Orleans, has Lafitte stories,” Curley says. But he doesn’t put any stock in such tales. “Do pirates bury treasure? Nah. They’re like addicted gamblers—they go to Vegas and win until they lose. But that doesn’t keep people from imagining.”

The Galveston & Texas History Center, on the fourth floor of the historic Rosenberg Library, holds a few more clues to Lafitte’s life, including two letters purportedly written by Lafitte. In one addressed to Gen. James Long—dated July 7, 1819, and bearing spidery script on weathered paper—he discusses Mexico’s desired independence from Spain. In another, addressed to President Madison, Lafitte seeks restitution for ships and goods that had been confiscated from him, arguing that he’d corrected his course since his youthful days in crime.

“My conduct since that period is notorious,” Lafitte contends. “The country is safe and I claim no merit for having, like all the inhabitants of the state, cooperated in its well fair [sic].”

Maison Rouge,
1417 Harborside Drive. Though Lafitte’s home is gone, this property across the street from the Port of Galveston contains the ruins of a later structure and a trove of ghost tales.

The Laffite Society,
which promotes historical research and education about Lafitte’s life and times, meets the second Tuesday of each month. Meetings are open to the public. Check the group’s Facebook page for schedule updates.