Written by Art Williams, Photographs by Sarah Kerver | From the October 2010 issue | Updated: October 31, 2018 | Filed Under: GetawaysHistoryThings to Do 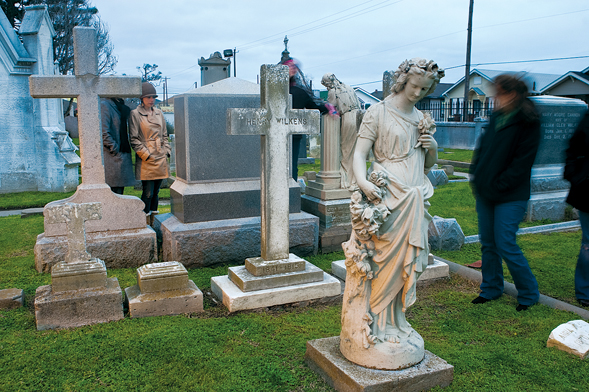 In the 19th Century, tragedies washed over Galveston as regularly as the tides: deadly fires, yellow-fever epidemics, and hurricanes. Anecdotally, this legacy of destruction left Galveston one of the nation’s most haunted cities. Even for travelers without a taste for the macabre, the wide range of said-to-be-haunted sites offers a fascinating glimpse into Galveston’s colorful past. In fact, I’ve come to the Island to learn more about local history, largely by looking for ghosts.

I’m among a group of tour-goers cruising aboard the Seagull II, a 50-foot motorcraft that Galveston Historical Foundation uses for field trips—including Haunted Harbor Tours—each October, just in time for Halloween. As the autumn sun edges toward the horizon, we pass the shrimp boats that comprise Galveston Island’s fishing flotilla known as the Mosquito Fleet. With their nets hanging loose, there is something gauzy and ghost-like in the appearance of these vessels.

Anchored on the Island’s east end, the Mosquito Fleet occupies a spot on the harbor not far from where legendary pirate Jean Lafitte first settled on Galveston in 1817. Having been chased out of Louisiana around his 40th birthday, Lafitte was one of the first Europeans to call Galveston home, and his followers numbered in the hundreds. Some say Lafitte’s ghost still haunts the Island.

Pirate legends represent just one aspect of Galveston’s spooky past. In addition to the harbor tours, each October GHF offers cemetery visits and explores the spooky side of the 1859 Ashton Villa mansion. The Island also has its own dedicated “ghost man” in Dash Beardsley, who guides paranormal and history walks along The Strand year round. During this trip, I discover that even my hotel—the luxurious Hotel Galvez—has its share of ghosts.

Back on board the Seagull II, GHF guide Brandon Ragan narrates the pirate Lafitte saga to 20 or so rapt passengers, including photographer Sarah Kerver, two or three families, and a group of area middle-school students. Historical reports say Lafitte was a tall, handsome fellow. On Galveston, he built an outlaw town­ship called Campeche (pronounced “com-peachy”) and required all who lived there to swear a loyalty oath. According to Ragan, in 1821, Lafitte complied with U.S. Navy demands that he and his crew depart American waters, but not before he burned the village, including his home, the Maison Rouge, to the ground. In a time-bound mystery, Lafitte and his men left Galveston never to be heard from in Texas again. To this day, historians debate his fate—and the fate of his treasure.

“Nobody knows what happened,” says Ragan, noting that treasure hunters still come to Galveston to search for booty, while ghost hunters show up look­ing for the pirate king. “Galveston is one of the most haunted cities in America,” Ragan wraps up. “Some people even say the Walmart is haunted.” On foggy nights, he adds, mysterious floating lights have appeared on the water: Some say the orbs are the ghost of Jean Lafitte.

Like Lafitte, Rebecca Brown—known as Miss Bettie—the mistress of Ashton Villa, was a larger-than-life Galveston resident. Brown died in 1920, but according to local legend, she looks after the family property on Broadway Street from beyond the grave. Her father, James Moreau Brown, a successful businessman, began building the two-story, Victorian-style Ashton Villa, with its 14-foot ceilings and crown molding, in 1859. In 1861, Brown finished building his handsome house, reportedly the first brick mansion constructed in the state of Texas. The third of five children, Bettie lived there until her death. Born during a corseted time for upper-class women, Bettie nonetheless was a strong-willed figure. She raised eyebrows as an independent globetrotter, sailing to exotic destinations such as India, Japan, and China, and she never married. Miss Bettie was also a serious artist, often painting pictures of young women in contemplative moments. Her colorful paintings still decorate the villa.

Since the mid-1970s, Galveston Historical Foundation has looked after Ashton Villa and opened it for tours. Today, res­toration work continues to repair the flood damage caused by Hurricane Ike in 2008. Miss Bettie and her little sister Mathilda lived through their own flood disaster in 1900, when the great storm that killed 6,000 people on the Island washed through the ground floor of the home—the doors and windows had been opened to allow the house to withstand the massive waves blowing across the Island. During my visit, a pencil line drawn by workers on the stained walls showed where nearly three feet of water inundated the mansion from Hurricane Ike. The first-floor furniture had been shipped to spe­cialists in Michigan for cleaning and fixing.

Each October, Galveston Historical Foundation offers a number of spooky tours, such as the haunted harbor tour aboard the Seagull II and cemetery visits.

GHF does not endorse the notion that Miss Bettie haunts Ashton Villa, but during the Halloween tours, foundation guides supply evidence that a ghost could exist. There is Miss Bettie’s souvenir box, for instance, purchased in the Middle East dur­ing one of her trips more than a century ago—it mysteriously locks and unlocks on its own. The catch? No living person pos­sesses a key to the box, which can be scrutinized on the second floor. Also upstairs, frequently straightened coverlets on one of the beds appear wrinkled as if by a person sitting on them, though caretakers pre­vent any visitor from doing so. Most extraordinarily, visitors regularly report seeing a figure resembling Miss Bettie at the top of the stairs.

From the villa, I make my way to the Broadway Cemetery. The aged gravestones, some marble, some mossy, some guarded by angel sculptures, offer clues to the city’s past, including the 1900 hurricane and the Civil War. Established in 1839, the cemetery has seven sections; these reflect the community’s diver­sity, with Jewish, Catholic, Greek, and Protestant areas. I arrive on an off day for a GHF tour, but I locate the graves belonging to some famous figures. These include the author of the Texas Declaration of Independence, George Campbell Childress, who committed suicide in 1841; and Lieutenant Edward Lea, a Union sailor killed at the Battle of Galveston in 1862. In an interesting twist, Lea died in the arms of his long-estranged father, a Confederate major, who reportedly also fought in the bloody battle.

Though Jackie Hasan, the concierge at Hotel Galvez, does not work for GHF, I would nominate her as an honorary guide. When it comes to ghost stories and the recently renovated, 224-room hotel—built in 1911 and preparing for its upcoming centennial gala—Hasan is a veritable encyclopedia. She can tell you who has seen ghosts at the Galvez, when, and where.

Notable signs of haunting include rattling doors in restrooms, and strange sounds emanating from rooms on the fifth floor, where Hasan says the ghost of a young bride-to-be still awaits her fiancée lost at sea. Hasan’s stories confirm yet again to visitors that on Galveston Island, the spirits of the dead-and-gone almost always linger nearby. Not that everybody who comes looking for ghosts will find them. “You have to be open to them,” Hasan explains. “Or you won’t feel them.”

Though I do not witness anything otherworldly on this trip, the roster of past Galvez guests from President Franklin D. Roosevelt to singer Frank Sinatra leaves me breathless. Architecturally, the hotel, with its spotless picture windows overlooking promenades lined by swaying palms and the luxurious courtyard with swimming pools and whirlpools, makes a strong impression as well. If I were a ghost, I’d seek bay breezes too.

Galveston Historical Foundation offers a variety of haunted happenings in October. Call or check their website for current schedule: 409/765-783 or; www.galvestonhistory.org.