The entertainer, bronc rider, and cattle barons inspired the décor, design, and beer of the famed Cowtown lodging 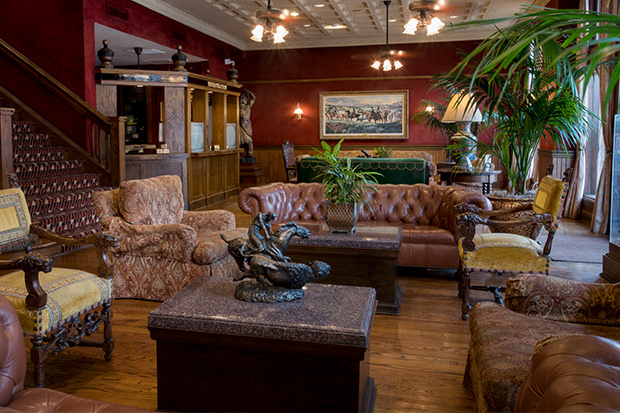 In our February issue story on the Stockyards Hotel in downtown Fort Worth, we made quick mention of names like Pawnee Bill, Booger Red, the Hunter brothers, all of whom memorialized in one way or another in the hotel: Lillie’s saddle is enshrined in the lobby; Privett’s biography is on the wall of Booger Red’s Saloon; and the adjacent H3 Ranch Live Hickory Wood Grill harkens back to the late 1800s and early 1900s’ era of the legendary Hunter brothers.

These men all have fascinating histories and have made immense contributions, so we wanted to dig into their stories a bit further.

Gordon William “Pawnee Bill” Lillie (1860-1942), cowboy, entrepreneur, and entertainer, debuted his Wild West Show at the nearby Cowtown Coliseum in 1909. Today, reenactors perform the same cowboy stunts with live animals and other props each weekend at the same venue.

According to the Oklahoma Historical Society, Lillie’s nickname derived from his work as a teacher and interpreter with the Pawnee tribe when Oklahoma was Indian territory. That led to his entry into show business, helping the Pawnees affiliate with the first Wild West Shows of Buffalo Bill Cody. Pawnee Bill failed financially to launch his own show, but succeeded on a second attempt after he gained a national spotlight in leading the Land Run of 1889 to settle what now is Kingfisher County, Oklahoma.

His show included his wife May as “Champion Horseback Shot of the West,” and he eventually merged with Cody when, as one tribute to Lillie asserted, Cody “was down on his luck.” Among Lillie’s other ventures were motion pictures, oil, and real estate. True to his Western heritage, he retained a buffalo herd on his ranch to protect the species’ dwindling numbers.

Samuel Thomas “Booger Red” Privett Jr. (1864-1924) was perhaps the best and most daring bronc rider of his time. He ranched near Sonora and Sabinal, operated a wagon yard in San Angelo, and formed a Wild West Show with his family, earning a reputation for breaking wild horses. His widow Mollie told an interviewer for the Federal Writer’s Project in 1938 that Booger Red had a standing offer of $100 for anyone who could produce a horse he couldn’t ride. “He never had to pay off,” she said.

The 19-page typewritten transcription of the interview fuels both legend and fact about Booger Red, including an anecdote about his last ride in 1924 at a Cowtown Coliseum rodeo. Retired from performing and weeks away from dying of the same inherited disease that killed his father, Privett was spotted in the audience, which, according to Mollie, exhorted him to challenge an “outlaw” horse that had just thrown its rider. That he rode the horse is accepted as fact; whether the event was impromptu has been challenged by subsequent research.

Still, Booger Red comes alive in Mollie’s plain-spoken interview, which is a treat to read. His last words, according to the interview—“Always be honest, for it pays in the long run. Have all the fun you can while you live, for when you are dead you are a long time dead.”

Also, according to his widow, “It had always been the custom up to then for the bronc rider to keep his eye directly on the mount in an effort to anticipate his next movement but Booger Red would tuck his thumbs in his suspenders and look all about, talking to his audience as he rode.”

His nickname derives from a youthful misfortune when he and a childhood friend turned a prank into tragedy—loading a hollow tree stump with gun powder. It exploded, killing the friend and disfiguring Privett’s face. According to historical accounts, his brothers said the red-haired Privett had been “boogered up.” Years later, he would insist he be introduced as the “ugliest man living or dead.”

More consequential to the settling of Texas and the West were the Hunter brothers—the “H3s,” so to speak. David, William, and Robert arrived in the U.S. from Scotland with their parents in 1844. Reaching adulthood, they were prospectors for gold in Colorado and Arizona, buffalo hunters for Buffalo Bill Cody, ranchers, developers of the Fort Worth Stockyards, and, in the case of Robert, a partner of financial baron Jay Gould and co-founder of the historic Texas Pacific Coal & Oil Company.

The bricks that form Camp Bowie Boulevard in west Fort Worth came from the kilns of Thurber, Texas—a modern-day ghost town, but the hottest locale for coal-mining in the late 1800s. Robert Hunter presided over the operations. Though the appetite for Thurber’s coal was exhausted by the 1920s and the town abandoned, other ventures of the corporation were sold and re-sold, eventually being worth billions by the 1980s.

Closer to home, William Hunter represented his family’s interest in a livestock commission business, occupying an office at Main Street and Exchange Avenue where the Stockyards Hotel is situated today. William wasn’t merely a desk jockey; he traveled by horseback to Montana and Mexico for cattle trading. When the Stockyards were connected by rail to other markets in 1876, the Hunter Brothers’ partnership with cattle impresario Albert Evans of St. Louis arranged the first shipment out of town. Meanwhile, David was in charge of the trio’s ranches.

“Buffalo Butt,” a lager created for Booger Red’s Saloon by local Rahr & Sons brewery, is named after William Hunter’s tendency of regaling others in Fort Worth saloons about a cold beer helping him forget the view he had during his buffalo-hunting days of the animal’s behind.