Pageant of the Charro 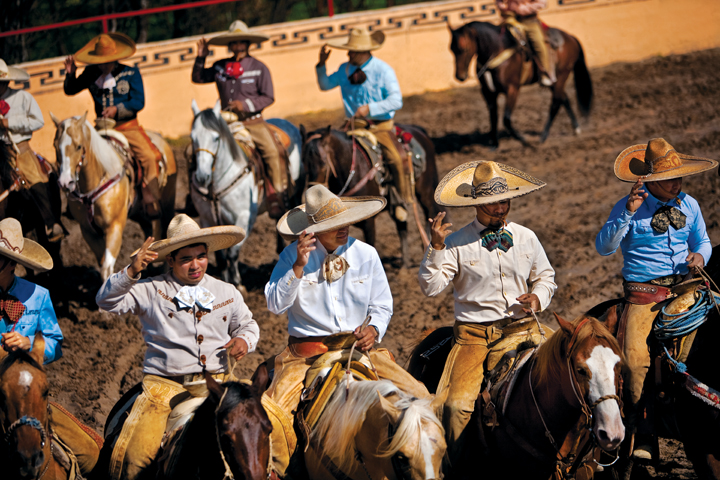 Teams of charros open the charreada by riding into the arena’s circular rueda, each team forming its own line. Photo by Julia Robinson

It’s a clear spring day at the Charro Ranch in San Antonio. Warmth radiates from the sun-drenched walls of the cream-colored arena. The church bells of Mission San Jose, less than a mile away, ring out over the 30 spectators taking their seats in the stands. Children play tag along the bleachers, which are mostly empty this early in the season. The smell of carne asada wafts on the breeze through oak and pecan trees. Tourists drive past the wrought-iron gates on their journey down the historic Mission Trail. Their efforts to experience the Hispanic heritage of Texas might be better
served if they turned in to watch the charreada.

Dating to the 16th Century, charreada began as a celebration, a fiesta, that marked the close of a major cattle roundup. Teams of charros, cowboys from sprawling ranches, called haciendas, competed against one another in a series of events, called suertes, modeled on the equestrian competitions of the Spanish conquistadors and everyday ranch work.

“The charro is, in a certain way, the father of the cowboy,” says Dr. Raul Gaona, himself a charro and historian on the subject. To this day, cowboys hold rodeos (the Spanish word for “roundup”), wear chaps (an abbreviation for the leather chaparreras worn by the charros to protect their legs from small shrubs called chaparros), and will dally rope around the saddle horn to keep a steer in control (from the Spanish dar la vuelta or “give it a turn”).

‘The charro is, in a certain way, the father of the cowboy. Some of the things the charros still do may look awkward or inefficient, but our interest is in preserving traditions.’

“The difference is that the cowboy kept evolving,” says Gaona. By adopting modern clothing, synthetic ropes, and squeeze chutes, the cowboy made practical changes in tools and methods. “Some of the things the charros still do may look awkward or inefficient,” Gaona continues, “but our interest is in preserving traditions. Charreada has given me an identity that makes me feel complete,” he says.

For Gaona and the hundreds of thousands of charros across the United States and Mexico, the suertes, the suit, and sombrero provide a tangible link to the lives of their fathers and grandfathers.

After the dissolution of the haciendas during Mexico’s 1910 Revolution, family groups of charros formed as performers in the charreada. As the 20th Century progressed, ranch life slowly changed with the times, but the tradition of the charreada continued.

“It wasn’t a sport when my dad was doing it, it was a way of life,” says Juan Gonzalez, current President of the San Antonio Charro Association. The group, founded in 1947, is the oldest charro association north of the Rio Grande. “Charreada is one of the biggest romances of my life,” says Gonzalez.

Today, as I gaze into the arena at the Charro Ranch, it’s easy to feel transported to a much earlier time. Two dozen regal horsemen, dressed in the charro finery of the 19th Century, ride side by side into the circular part of the arena, called the rueda, for the opening parade. Mariachis sound the Marcha de Zacatecas, a patriotic march, while each team rides in its own line stretching from the outer wall of the arena toward the center. As the riders step around the ring, their sombreros move in unison and create an image like the spokes of a turning wheel.

The month of March marks the beginning of a new year of charreada competition in Central Texas. Every weekend, spring through fall, teams of charros gather at backyard arenas, called lienzos. The keyhole-shaped lienzo is 110 yards long with competition in two areas, a 66-yard-long panhandle and the round rueda, 44 yards in diameter. The nine suertes test horsemanship and roping skills. Just as in the old days of the hacienda, there are no cash prizes, just the respect of fellow competitors. “Keep the money, keep the belt buckle, we just want the bragging rights,” says Gonzalez.

These days, more than 200 official teams compete in the United States, with more than 30 across Texas in Austin, El Paso, Dallas, Houston, Del Rio, and San Antonio. Teams take turns hosting the charreada, sharing the expense of leasing livestock, or hiring a band for a dance, or baile, in the arena after the charreada is over.

From the opening parade, the charreada moves at a stately pace. Among the suertes, fans of American rodeo will recognize bronc and bull riding, but the charreada distinguishes itself with horse reining , intricate rope work, and an emphasis on style over speed.

The cala de caballo, or “horse reining;’ begins each competition. A charro at full speed brings his horse to a sliding stop in the rueda then executes tight spins and half turns. In all the charreada events, charros earn higher scores for their endurance as well as for their style. Where North American rodeo cowboys hope to hang on for an eight-second ride, a charro rides a bull or bronc until it stops bucking. Sometimes the rides evoke gasps of amazement from spectators watching the charro romp for several laps around the arena on the back of a kicking animal. Other times, when the animal is not in the bucking mood, the ride ends quickly. It’s the luck of the draw, but a better ride will earn more points.

In the manganas, or forefooting, the charro proves his skill with the reata, or lasso. Teammates chase the bronc while the charro displays his best flourishes for the judges, closing his performance with an attempt to lasso the horse by the front legs as it races past.

The Mexican Federation for Charreria officially adopted the escaramuza, or skirmish, in the early 1990s as an optional 10th event. This is the only event for women in the charreada tradition. Riders in bright, flowing dresses, called adelitas, perform intricate drill patterns at high speeds. In a blur of color, they burst from the center of the arena in all directions like a blooming flower, and execute turns on a dime, inches from one another.

For keen-eyed spectators, a charreada proves more fun with some knowledge for the subtleties of scoring. In the cala, for example, a charro earns points for turning his horse more than three times, but loses points if the horse opens his mouth during the reining. In a bull ride, the charro forfeits points if he loses his sombrero or doesn’t land on his feet.

A newcomer to charreada would do well to sit next to a charro in the crowd. Most spectators at the Charro Ranch love the tradition and will gladly explain
anything about the performances. “We’re all amateurs,” says Juan Gonzalez, ”but there’s a passion behind what we do.” During the week, these men are doctors and lawyers, butchers and carpenters, but on Sunday they each become the charro.

As the afternoon turns to dusk in San Antonio, a young charro is showered with boots and hats thrown from the stands into the dusty rueda. His excellent
performance in the lienzo has earned him this special honor. He returns them one by one to their owners, a personal exchange between the charro and
his admirers. His youth makes Gaona and Gonzalez hopeful that the charreada tradition will carry on, one Sunday at a time, one generation at a time.