Written by Lois Rodriguez, Photographs by Michael Amador | From the May 2014 issue | Updated: July 10, 2020 | Filed Under: History 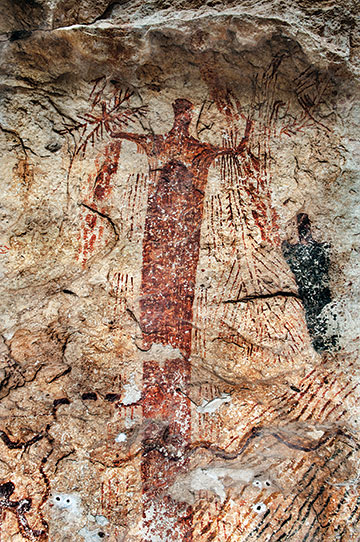 Archeologists believe that ancient canyon-dwellers painted the rock art of Soutwest Texas, including this figure in the Panther Cave shelter.

The desert canyonlands formed by the Rio Grande, Devil’s, and Pecos rivers may appear inhospitable to travelers driving west of Del Rio on US 90. Rugged limestone canyons cut through sun-drenched desert plains of thorny brush vegetation like sotol, lechuguilla, yucca, and prickly pear. But to hunter-gatherers some 4,000 years ago, this uninviting territory was a veritable garden.

Though hidden at first glance, the limestone canyons of Southwest Texas protect a historical treasure of ancient pictographic art and relics of the people who inhabited the region for more than 9,500 years. The shelter provided by limestone canyons and overhangs, coupled with the arid environment, has preserved one of the continent’s best opportunities to study ancient Native American hunter-gatherers, people who lived off the land and did not cultivate crops.

Modern archeological researchers—ranging across disciplines such as botany, biology, genetics, zoology, paleontology, and chemistry—have been studying the rock shelters and associated artifacts since the 1920s. Their findings offer an understanding of the time period, environment, and daily living conditions of the canyon-dwellers and how they survived from one season to another. Today, institutions such as the Witte Museum in San Antonio help interpret their findings for the general public, while various groups lead expeditions to see ancient rock paintings at sites like Seminole Canyon State Park and Historic Site, Amistad National Recreation Area, and properties owned by the Rock Art Foundation and Shumla Archeo-logical Research and Education Center.

The potential of our natural resources often escapes us today, but for the people who lived in what would eventually become Texas, the environment of the Lower Pecos Canyonlands was both a supermarket and hardware store. Evidence of thousands of years of human life can be seen in the cultural refuse scattered across the landscape and buried in riverbanks and rock shelters. 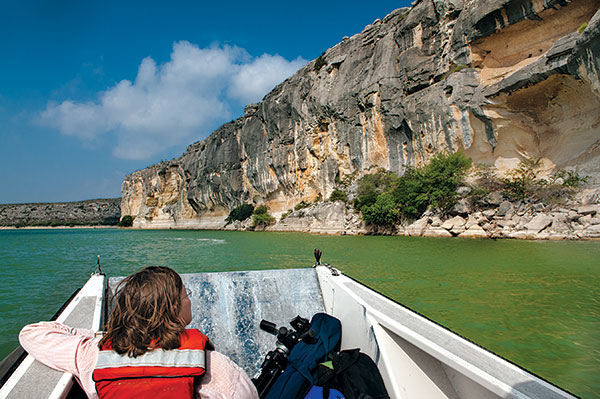 Piecing these clues together, archeologists have developed a picture of a resourceful people that made the most of their surroundings. Preserved grass beds provided a padded sleeping space. Leaves and fibers of agave, lechuguilla, sotol, bear grass, and juniper became baskets, mats, strings, nets, and sandals. The hunter-gatherers wore little clothing during the warm seasons and donned cloaks made of rabbit fur during the winter. They used dry lechuguilla stalks as both hearth sticks to start fires and as spear shafts. Mounded accumulations of fire-cracked rock mark the location of ancient earth ovens. For warmth, the canyon-dwellers would place heated limestone rocks into the recesses of a canyon wall. They made knives, projectile points, and other stone tools of chert, another abundant resource.

When it comes to diet, archeologists have discovered clues such as animal bones that were split to release marrow and the chewed leaves, or “quids,” of cooked sotol and lechuguilla. Some of the most informative bits of trash preserved in the dry rock shelters are the dried human feces found in ancient latrines. Vaughn Bryant, a professor in the Texas A&M University Anthropology Department, has worked with students to examine feces found in Hinds Cave and other sites in Val Verde County for clues into the canyon-dwellers’ diets. It seems they overlooked nothing in their quest for sustenance. Their feces reveal the consumption of persimmon, acorns, prickly-pear pads and fruit, flowers, deer, rabbits, birds, wood rats, mice, lizards, fish, clams, snails, and grasshoppers.

The ancient canyon-dwellers also had a distinct cosmology and spiritual life, as evidenced by the colorful pictographs lining the walls of their hidden recesses. Radiocarbon dating of their paint materials, such as animal fat and marrow, indicates that some pictures date as far back as 4,000 years, making them among the oldest known paintings on the continent. The people of the Pecos created their rock art by painting, drawing, and engraving, sharing volumes about what life was like thousands of years ago. Art panels impressive in both scale and intricacy feature multicolored, human-like figures accompanied by animals and enigmatic designs documenting complex myths and rituals. Some painted scenes stretch more than 100 feet long and feature characters 20 feet tall. Anthropomorphic figures with feathers or rabbit ears; scenes of pregnancy and copulation; ghostly handprints—all are awe-inspiring and mysterious to visitors today.

“The paintings are a priceless treasure, a window into the past that is beginning to open as we begin to understand a time and a culture we could only barely imagine,” says Greg Williams, executive director of the Rock Art Foundation in San Antonio. 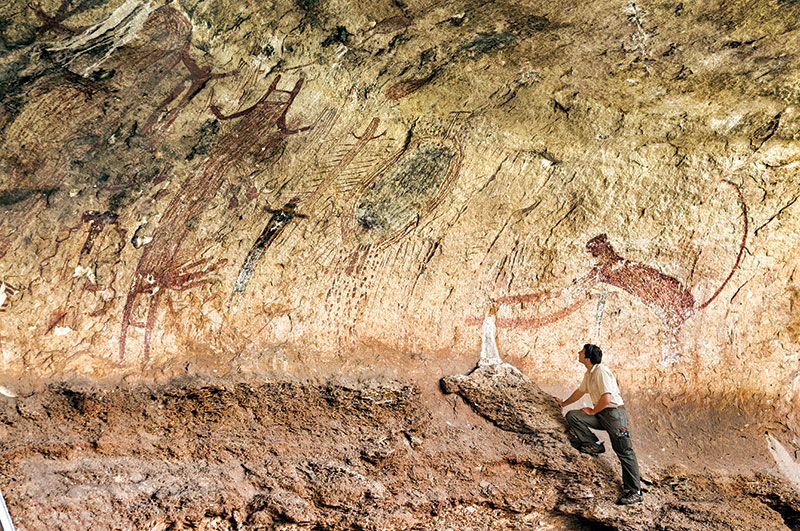 Evidence of thosands of years of human life can be seen in the cultural refuse scattered across the landscapes and buried in riverbanks and rock shelters.

The meaning of the Pecos River paintings continues to be a source of conversation and debate among scholars and lay observers alike. Some scholars believe that prominent anthropomorphic figures are meant to represent shamans or priests. Perhaps they were painted to illustrate real and imagined experiences, origin myths, transformations into spirit beings, mythical journeys to sacred places, or acts of healing? Regardless of their creators’ intentions, the paintings convey evidence of the canyon-dwellers’ mythology and a complex belief system, something rarely found in Texas archeology.

“After decades of research, we’ve determined that many, if not all, of the murals are intricate pictorial narratives detailing myths and histories that live on as part of a deeply rooted, widely shared symbolic world among contemporary Native Americans,” says Carolyn Boyd, director of Shumla Archeological Research and Education Center in Comstock.

The Witte Museum in San Antonio explores the culture and lifestyle of the Lower Pecos Canyonlands hunter-gatherers in its Ancient Texans exhibit. The exhibit includes artifacts of their daily and spiritual life—such as stone tools, baskets, nets, and painted pebbles—and compares their lifestyle with those of hunter-gatherers in Africa and Australia. An update of the exhibit, including the new title of People of the Pecos, is scheduled to open in spring 2017.

Better yet, you can view first-hand impressive examples of the region’s rock art and ancient artifacts at the Fate Bell Shelter in Seminole Canyon State Park, a three-and-a-half-hour drive west from San Antonio. The park provides guided tours of the shelter, which contains some of the region’s oldest known pictographs—human-like figures with their arms outstretched. Looking out from these shelters on the Pecos landscape with its stark rock formations and fragile flora, visitors feel a deep and lasting connection to the past.

Over the years, vandals have destroyed many archeological sites in the region, and in 1969, the formation of the Amistad Reservoir inundated others. Organizations dedicated to preserving the remaining sites do so with the common objective of educating the public about what is left. The Rock Art Foundation leads tours in the spring and fall to numerous rock art sites throughout the Lower Pecos, including such well-known sites as White Shaman, Halo Shelter, and Curly Tail Panther. Shumla offers public-outreach programs for students and adults, and conducts a research program to document rock art and archeology of the region. The Amistad National Recreation Area maintains the sites along the reservoir’s shorelines, and its visitor center features an exhibit on the rock art sites, including an informative movie. Some of the Amistad sites are accessible by boat, depending on the water level; the National Park Service does not provide tours, but some local fishing guides do.

However, most of the region’s 300-plus rock art sites—and thousands of archeological sites—are on private property. Therefore, local landowners and ranchers are the most important stewards of preservation. The limestone canyons of the Lower Pecos Canyonlands house a rich resource of cultural material for the study of ancient hunter-gatherers, revealing much about a people with the grit and inspiration to survive in a vast and rugged landscape. While the timing and reason for their departure from Southwest Texas remain uncertain, it’s up to us to learn from the history they’ve left us, both accidental and on purpose, and to preserve these lessons for thousands of years to come.