Glen Rose celebrates the centennial of an unusual discovery 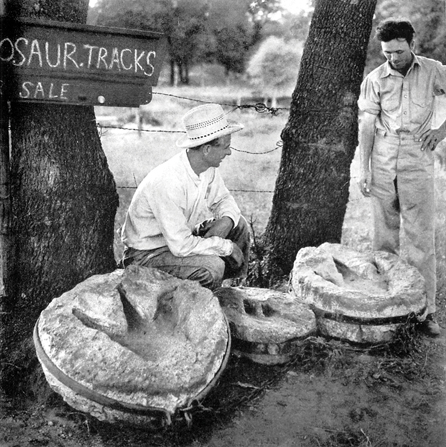 In the 1930s, some Glen Rose-area farmers sold dinosaur tracks they excavated from the Paluxy riverbed. (Photo courtesy of the Paluxy Valley Archives and Genealogy Society)

A teenager’s chance discovery 100 years ago in Somervell County caused a stir among locals and eventually drew the attention of scientists around the world. On a late winter day in 1909, George Adams was tramping along Wheeler Branch, a tributary of the Paluxy River, near Glen Rose, when he saw a strange and compelling sight—a trail of large, bird-like prints that led through the limestone streambed ahead.

Puzzled about the three-toed tracks, he confided in Robert McDonald, his principal at Glen Rose School. In a letter written in 1965 to one of the boy’s relatives, McDonald described the youth’s revelation:

“On this occasion [sic], he went to the black board and drew some tracks. I was impressed and we set out immediately for Wheeler Branch. About one mile up stream George stopped and pointed them out. There they were! No doubt about it—dinosaur tracks!”

Next morning at school it was announced that George Adams had discovered dinosaur tracks up Wheeler Branch … field day was declared and away went the entire student body to view those amazing tracks that had remained hidden throughout the ages.”

Newspapers reported the remarkable find, and the stony oddities enticed visitors from surrounding counties. Paleontologists from the Smithsonian determined from a sketch of the fossil footprints that they belonged to “one of the large bipedal dinosaurs.” Local residents soon discovered other sets of tracks in the Paluxy riverbed, which became the focus of tourists, entrepreneurs, and scientists. Thus began the unveiling of Texas’ best-preserved
dinosaur tracks.

Paleontologists who later examined the three-toed prints (called theropod tracks) identified Acrocanthosaurus as the likely trackmaker. The imposing carnivore, up to 30 feet long and weighing two to three tons, had menacing claws, serrated teeth, and a bony ridge that ran the length of its spine. Researchers confirmed that other dinosaurs had also left their calling cards. Sauropod tracks likely made by Paluxysaurus, a herbivore, appear as huge potholes—sometimes three feet long—that pit the rocky bottom of the riverbed. One of the largest of the Texas dinosaurs, Paluxysaurus stood up to 60 feet long and weighed 30 tons. Paleontologist James Farlow of Indiana University-Purdue University Fort Wayne, who has studied dinosaur tracks in Texas since 1980, describes the northern loop of the Paluxy River, in Dinosaur Valley State Park, as the site of “one of the most spectacular concentrations of fossilized dinosaur footprints in the world.”

Farlow notes in The Dinosaurs of Dinosaur Valley State Park (1993) that a dinosaur skeleton offers only indirect inferences about the living animal. “Trackways are different,” he writes, ” … they preserve the movements of animals, constituting a kind of time machine that allows us to be transported, if only in our imagination, to actual moments in the lives of dinosaurs.”

Research of the Glen Rose tracks has produced significant data about these animals’ size and locomotion, as well as the direction in which they were traveling and a rough estimate of their speed. The traces also tell the story of an ancient landscape.

Prehistoric North Central Texas was far different from the cedar-dad hills and limestone valleys of today—it featured inlet bays, tidal lagoons, and salt marshes. As the creatures of the Early Cretaceous Period trudged across the coastal flats, approximately 113 million years ago, their feet sank in fine-grained, limy mud—the ideal medium for making impressions that would eventually harden and be buried under layers of sediment.

For eons, these snapshots of the creatures’ journeys lay hidden until time and erosion finally revealed a little piece of the ages to a schoolboy. A century later, you can see the tracks for yourself at Dinosaur Valley State Park.

Local efforts to protect the dinosaur tracks in Somervell County culminated in the dedication of Dinosaur Valley State Park in 1970. Located off FM 205, about four miles west of Glen Rose, the 1,590-acre park allows visitors to see first-hand some of the best-preserved and most numerous dinosaur fossil footprints in Texas and the world. The best viewing is during dry weather when the Paluxy River is low; call ahead to check on river conditions. The staff also offers interpretive programs about dinosaurs throughout the year.

In addition to the stony traces left by creatures long ago, the scenic river valley offers leisure activities such as hiking, mountain biking, picnicking, camping, fishing, and swimming. “A vast majority of people come to see the dinosaur tracks and end up coming back because of the river,” says Park Superintendent Billy Paul Baker. Two fiberglass dinosaur replicas, commissioned by the Sinclair Oil Company for the 1964 New York World’s Fair, tower near the gift shop, providing perfect backdrops for funky photos. Call 254/897-4588; tpwd.texas.gov.

Texas Memorial Museum, the exhibit hall of the Texas Natural Science Center at The University of Texas at Austin, displays both sauropod and theropod tracks in a rock slab quarried from the Paluxy River in 1940. Call 512/471-1604; www.texasnaturalsciencecenter.org.