Rogers Hornsby is a baseball star for the ages 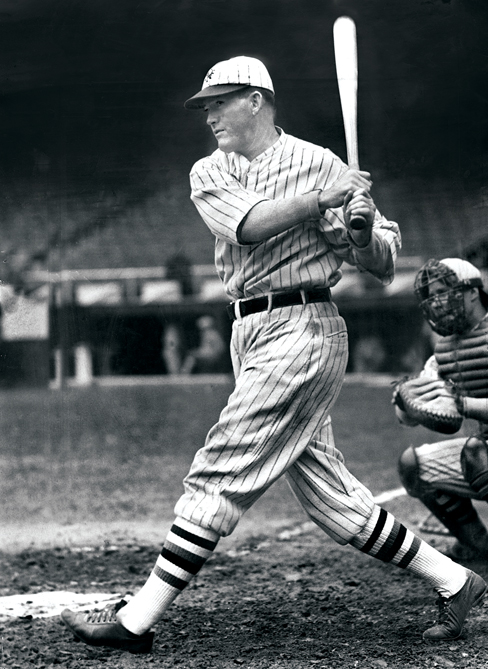 “The Rajah” ruled. Sporting the second-best lifetime batting average (.358) in the history of Major League Baseball, surpassed only by that of Ty Cobb, Hall of Famer Rogers Hornsby (1896-1963) remains one of the diamond’s elite stars. Born in Winters and raised in Fort Worth, Hornsby found his personal journey filled with what-ifs and a litany of extenuating circumstances. His story, on and off the field, provides a telling and sometimes bittersweet reflection of his time. An examination of his life and career also shows that the more things have changed, the more they have stayed the same. Like celebrity sports figures today, Hornsby was the focus of media scrutiny in both his professional and personal life. Controversy swirled about his connections to gambling, as well as salary, legal, and family issues.

After an inauspicious start in professional baseball, primarily with the Texas-Oklahoma League’s Denison Railroaders, Hornsby had his contract purchased by the St. Louis Cardinals, who needed to sign undiscovered, cheap talent. Hornsby’s debut with the Cardinals near the end of the 1915 season did not foreshadow his future greatness.

In his insightful biography Rogers Hornsby, Charles C. Alexander recounts a 1915 conversation published in the St. Louis Post-Dispatch between Hornsby and Cardinals manager Miller Huggins at the conclusion of Hornsby’s rookie season. When the young player asked Huggins about his future, the manager replied, “Kid, you’re a little light, but you got the makings. I think I’ll farm you out for a year.”

People ask me what I do in the winter when there’s no baseball. I stare out the window and wait for spring.’

Hornsby misunderstood Huggins to mean he should spend the winter on a real farm doing hard work, so Hornsby did exactly that at his uncle’s farm near Lockhart.

Determination to improve physically in the off-season paid dividends for Hornsby. He showed up at spring training a stronger, more powerful player. The young Texan shot to stardom, and sportswriters soon nicknamed him “The Rajah.”

For much of his career, Hornsby played second base, but the sage and temperamental Texan also managed seven Major League teams throughout his tenure in the game, five (St. Louis Cardinals, New York Giants, Boston Braves, Chicago Cubs, and St. Louis Browns) while he was an active player, and two (the Browns again and Cincinnati Reds) after his playing days concluded. With the Cardinals in 1925, at the age of 29, “The Rajah” took on the combined roles of player, manager, and stockholder in the team. The next season, the Cardinals won a memorable 1926 World Series, upsetting Babe Ruth and the Yankees in seven games. With a keen batting eye and power to all fields, this Texas titan hit his way into Cooperstown (home of the National Baseball Hall of Fame and Museum). As they say today, the dude could rake. He was also fast on the base paths and an accomplished fielder—a complete player with a passion for the game. Many of his contemporaries, including pitching great Grover Cleveland Alexander and respected writer John B. Sheridan, acknowledged Hornsby as the best hitter of his era.

Hornsby’s career achievements include: two-time National League Most Valuable Player (1925 and 1929); two National League Triple Crowns (1922 and 1925); seven National League batting titles; and a .400 or better batting average in three different full seasons, hitting .424 in 1924. As the famous Yankee manager Casey Stengel, a contemporary of Hornsby, often quipped, “You could look it up.”

Many who encountered Hornsby considered the enigmatic sports hero brash, brusque, belligerent, bullheaded, ill-mannered, inscrutable, irascible, and intimidating, yet he rarely tangled with umpires. According to Alexander’s biography and other accounts, Hornsby was a simple, uneducated man, though on occasion he revealed a more sophisticated, complex nature. He could be thoroughly engaging, particularly when it came to baseball, and was noted for his enthusiasm and patience with youngsters wanting to learn the game.

Hornsby loved holding court during the season in hotel lobbies, and he was a veritable quote machine for sportswriters: ”People ask me what I do in the
winter when there’s no baseball. I’ll tell you what I do. I stare out the window and wait for spring!’ And, his mantra for hitting success endures as gospel: “Get a good pitch to hit. Swing at strikes. Hit the ball where it’s pitched. Don’t try to pull everything. Don’t guess. Be confident.”

Hornsby’s singular focus on the game (he seldom read or watched movies to protect his extraordinary vision), truthful-to-a-fault persona, and salty  vocabulary often fostered conflict. Hornsby didn’t smoke, drink, or carouse. However, divorces from the mothers of his two sons, a proclivity for gambling,  lawsuits, and a number of failed investments led to financial problems. Numerous injuries from the wear-and-tear of playing took their toll. Clashes with management over contract negotiations, personnel, strategy, and handling of players, as well as admonishments from powerful baseball commissioner Kenesaw Mountain Land is further complicated the drama of Hornsby’s life.

Not physically imposing, Hornsby was nevertheless feared by pitchers for his remarkably consistent ability to hit and drive in runs. As baseball’s popularity expands worldwide, the Hall of Famer’s colossal career accomplishments continue to inspire players and public alike.