Written by Art Williams, Photographs by Will van Overbeek | From the December 2014 issue | Updated: July 10, 2020 | Filed Under: detourHistory 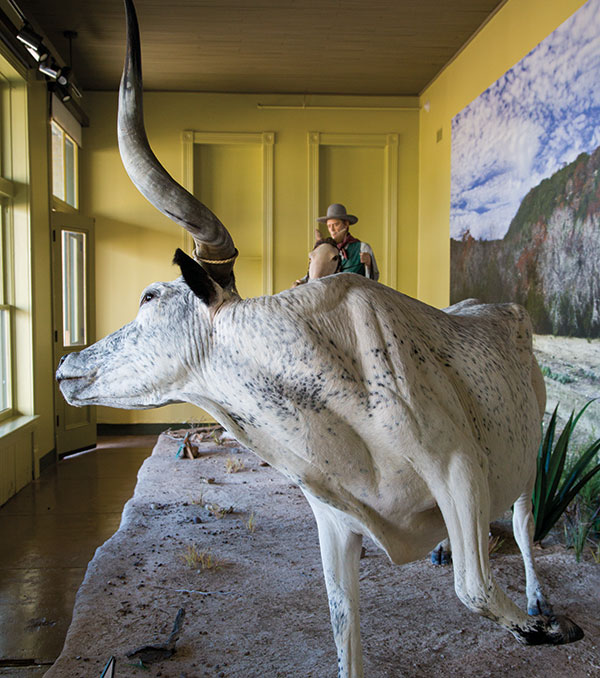 They headed north from Cardwell Flats on April 1, 1866. Crockett Cardwell, who operated a trading post and stagecoach stop near present-day Cuero, had gathered some 1,800 rangy Texas Longhorns for trail boss Thornton Chisholm and a handful of cowboys to drive to a railhead at St. Joseph, Missouri, a journey that would take them seven months.

Like many Old West legends, the Chisholm Trail, with its many branches and stories of origin, is a tangle of tales and trails.

Over the following decades, their general route would come to be known by one of the most storied names in the West—the Chisholm Trail.

Like many Old West legends, the Chisholm Trail, with its many branches and stories of origin, is a tangle of tales and trails. Disagreement has long simmered, for instance, over whether it was named for Thornton Chisholm or for Indian Territory trailblazer Jesse Chisholm, or possibly even for Texas/New Mexico cowman John Chisum.

We’ll likely never know everything, and frankly, history is a lot more fun with some lingering mysteries. But a great place to explore the era is the Chisholm Trail Heritage Museum in Cuero, a few miles south of the site of Cardwell Flats. Opened in 2013 in the restored 1903 Knights of Pythias Hall, the museum aims to preserve not only the legacy of the Chisholm Trail and Guadalupe River Valley ranching, but to keep the cowboy spirit alive, as well.

Museum visitors first encounter a gallery dedicated to ranching traditions of the Guadalupe River Valley. The valley’s rich grazing lands of bluestem and other grasses have made the area a cradle of the Texas beef cattle industry since the 1700s. The exhibit includes a pair of period stovepipe cowboy boots and an 1852 ledger from Crockett Cardwell’s store, open to a page showing Thornton Chisholm’s outstanding balance of $11.68.

Ranching in the area had begun under the flag of Spain, which stocked its missions and forts with cattle. Later, ranching flourished under Mexican jurisdiction, with a 20,000-acre ranch belonging to empresario Martín De León. The museum chronicles the valley’s blending of traditions: the Mexican vaquero with his riding and roping skills, and the Anglo-American cowboy, who more often relied on dogs and stock whips for herding cattle.

Texas cowboys drove some 9 million cattle to shipping yards in Kansas from 1867 to 1890, museum exhibits explain. In the late 1860s, a steer worth $4 in Texas brought $40 in Eastern packing plants. One of several interactive features, Lead a Trail Drive, challenges visitors to pick cowboys for the trail-driving positions of drag, flank, swing, point, and wrangler. Other interactive stations offer the chance to choose routes, grazing places, and bedding grounds.

Accompanying a re-created chuckwagon, an interactive screen describes such features as the wagon’s possum belly, which was the rawhide hammock stretched beneath the wagon bed for storing wood and dried cow chips to be used as fuel. Western and Eng-lish riding saddles, two of the museum’s many saddles on display, invite folks to “Climb Aboard and Feel the Difference!” between the two styles. In the gallery’s Stars Along the Rawhide Trail Theater, the 15-minute film Pointing Them North reenacts the 1866 drive from Cardwell Flats.

A rolling cylinder inscribed with definitions of ranching terms provides historical hilarity. “Hornswoggling,” for instance, refers to the dodging and wiggling movement by which a roped steer throws off the rope. An “owlhead” is a horse that can’t be trained, and a “pie-biter” is a steed that munches on chow in the camp kitchen. A “hassayampa,” named for the river in Arizona, is a tale-spinner who excessively redecorates the facts. To “mustard” the cattle is to excite or stir up the herd, and “fuzzy guzzy” was a game cowboys played with a small top.

The Chisholm Trail Heritage Museum is also home to the fascinating Horsemen of the Americas: Tinker Collection, amassed by Dr. Edward L. Tinker (1881-1968) and on permanent loan from the University of Texas at Austin. Artifacts from the collection, such as fine silver spurs, exquisite saddles, and carved stirrups, represent Latin American gaucho gear.

Another of the museum’s memorable artifacts is the .41 caliber double-action Colt revolver that an El Paso sheriff took from gunslinger-turned-lawyer John Wesley Hardin shortly before Hardin was gunned down in a saloon in 1895.

While Hardin’s Wild West days and the Chisholm Trail are both long gone, the cowboy way is alive and well in places like the Guadalupe River Valley.
The Cowboy’s Legacy exhibit showcases contemporary ranching life with displays of working tools and short videos about Cuero spur maker Jimmy Koranek and saddle maker Tod Slone, along with videos of local cowboys at work.