Written by Lois Rodriguez, Photographs by Will van Overbeek | From the July 2014 issue | Updated: July 10, 2020 | Filed Under: History 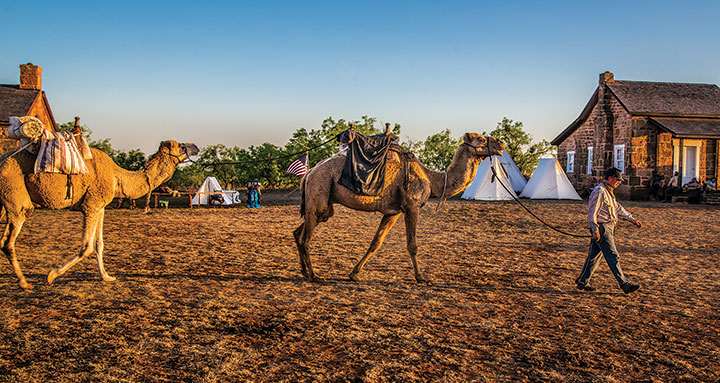 Doug Baum’s farm outside of Waco looks like most others in Central Texas. There are a few scattered, scrubby mesquite trees, an old windmill from the Axtell Company in Fort Worth, and a maze of barbed wire fencing to separate the donkeys and the goats from the camels.

Baum has owned camels since 1997, when he worked at the Nashville Zoo as a camel caretaker. When he moved back to Texas, he brought two camels along to start Texas Camel Corps. He has acquired seven more since then.

Camels have a nasty reputation, but it’s largely unearned. The camels on Baum’s farm aren’t aggressive or short-tempered. At worst, they’re indifferent toward visitors. At best, they’re like enormous hay-eating puppies.

Baum isn’t the first Texan to extol the virtues of camels. From 1856 to 1866, Texas was home to the U.S. Army’s camel experiment, a short-lived project that used camels to ferry supplies across the deserts of the Southwest. Deemed a success by most standards, the government nevertheless canceled the program, a victim of volatile Civil War-era politics.

It’s a little-known story that Baum loves to tell as he travels the state with his camels—who ride along in a specially designed, eight-foot-tall trailer—guiding treks and participating in historical reenactments to educate people about camels and the obscure role they played in 19th-Century Texas. “I probably see 10,000 school kids a year across all of the events we do,” he says. “And 95 percent of the history teachers will say ‘I had no idea. This isn’t in our textbook.’”

Texas Camel Corps participates in dozens of events throughout the year, including reenactments at Fort McKavett, Fort Davis, and Fort Clark near Brackettville. Baum also takes his camels to schools and community events, and he opens his Valley Mills farm for public visits by appointment. Visitors can expect to learn the Texas camel tale and get an up-close-and-personal experience with the camels—both one-humped and two-humped animals. While camels can live about 40 years, the oldest in Baum’s group is 28-year-old Irenie.

Nine camels currently make up Texas Camel Corps. Two females—Virgie and Marianne, both age 14—are pregnant with due dates in spring 2015. Camels have a 13-month gestation period.

The story that inspired Baum to start Texas Camel Corps begins with Jefferson Davis, a senator from Mississippi who would later become president of the Confederacy. Davis thought that as more Americans moved west, camels could be the ideal pack animal to help them. Cross-country rail systems had yet to be constructed, and mules and horses fared poorly when there was scant access to water. Camels thrive in deserts in nearly every other corner of the world; why would the American Southwest be any different?

Davis pitched the camel concept to the Senate twice in the early 1850s, but both times it was laughed off the floor. Then, in March 1855, Davis found a way to fund a camel experiment in his role as Secretary of War under President Franklin Pierce. In fine print, he tacked $30,000 to buy camels onto a bill that funded road and bridge repair in Illinois.

Davis charged Major Henry Wayne with leading a voyage to the Middle East and North Africa to purchase the camels. Wayne spent nearly a year acquiring camels in modern-day Egypt, Algeria, Tunisia, and Turkey. In May 1856, 34 camels arrived in Texas, landing near modern-day Port Lavaca at what was then the port of Indianola.

The Army marched the camels from Indianola to Camp Verde, an outpost in the Hill Country, just south of Kerrville. The original 34 camels were later joined by a second shipment of 41 camels, pushing the Camp Verde camel population to 75.

For the next 10 years, the military used the camels to haul military supplies between Camp Verde and San Antonio, which was then the home of the Department of the Army in Texas. The site of old Camp Verde, most of which eventually burned in a fire, is now on private property. Nearby, in the town of Camp Verde, the Camp Verde General Store and Restaurant recalls the local camel history with various camel sculptures on its property.

In addition to their routine day-to-day duties, the camels also took part in three long-distance expeditions. The first was in the summer of 1857, when Edward Fitzgerald Beale was tasked with surveying what came to be known as the 35th Parallel Wagon Road—later known as historic Route 66. The journey stretched from Fort Defiance in western New Mexico all the way to Fort Tejon, north of Los Angeles. Beale employed about two dozen Camp Verde camels during his expedition. His lead driver was a Middle Easterner named Hadji Ali, called “Hi Jolly” by Texan soldiers unaccustomed to Arabic pronunciations.

With their ability to tread over tough terrain and forgo water for long periods of time, the camels were integral to Beale’s passage through the arid Southwest. Beale wrote in his diary that “my only regret is I have not double the number [of camels].”

Another major camel expedition to depart from Camp Verde was an 1859 excursion by Lieutenant Edward Hartz and Lieutenant William Echols, members of the U.S. Army Corps of Topographical Engineers, to the Trans-Pecos region. As residual agitation from the Mexican-American War still simmered along the border, their mission was to survey the region’s trails and scout locations for possible fortifications.

Hartz and Echols headed west from Fort Stockton (known as Camp Stockton in those days, since it was just a few tents), tramping through the hot and rocky expanse of the Chihuahuan Desert. Again, the camels proved to be perfectly suited for the job.

Hartz and Echols brought along feed for the horses and mules, but they carried no such provisions for the camels. The camels seemed content to gnaw on the ocotillo, creosote, prickly pear, and catclaw they found along the trail. And although they hauled barrels of water for the expedition’s other mammals, the camels themselves usually only drank when they came across a stream or a creek.

Camels thrive in deserts in nearly every corner of the world: why would the American Southwest be any different?

At one point, Hartz and Echols had to abandon 30 mules because they had worn through their metal shoes and replacements weren’t available. The camels’ feet also suffered, Echols reported, but they continued on and eventually healed. After two excursions through the desert and hundreds of miles along the old Comanche War Trail—a network of West Texas hunting paths carved out by generations of mounted Comanches—Hartz and Echols returned to Camp Stockton with all of their camels accounted for. “If it were not for the camels, surely our expedition would have failed,” Echols wrote.

Some of the veteran camels helped form a supply train from Laredo to Mexico City; others worked in California for gold prospectors. Here and there, a few camels escaped. Reports of camel sightings continued through the 1950s. Those could have been the descendants of either Army camels or the 400-plus camels that were privately imported during the same period.

Even though the government’s camel experiment was short-lived, Baum doesn’t believe it was a total bust. “The camels were a practical success but a political failure,” he says. Whether on his farm, at historical reenactments, or on camel treks in the spring and fall in the Davis Mountains, Baum finds a receptive audience for the animals of Texas Camel Corps and their pioneering predecessors.

“Anyone who has interacted with the camels turns into a disciple,” Baum says.