The New London Museum Recalls the Most Deadly School Tragedy in U.S. History

The day a generation died in 1937 in East Texas 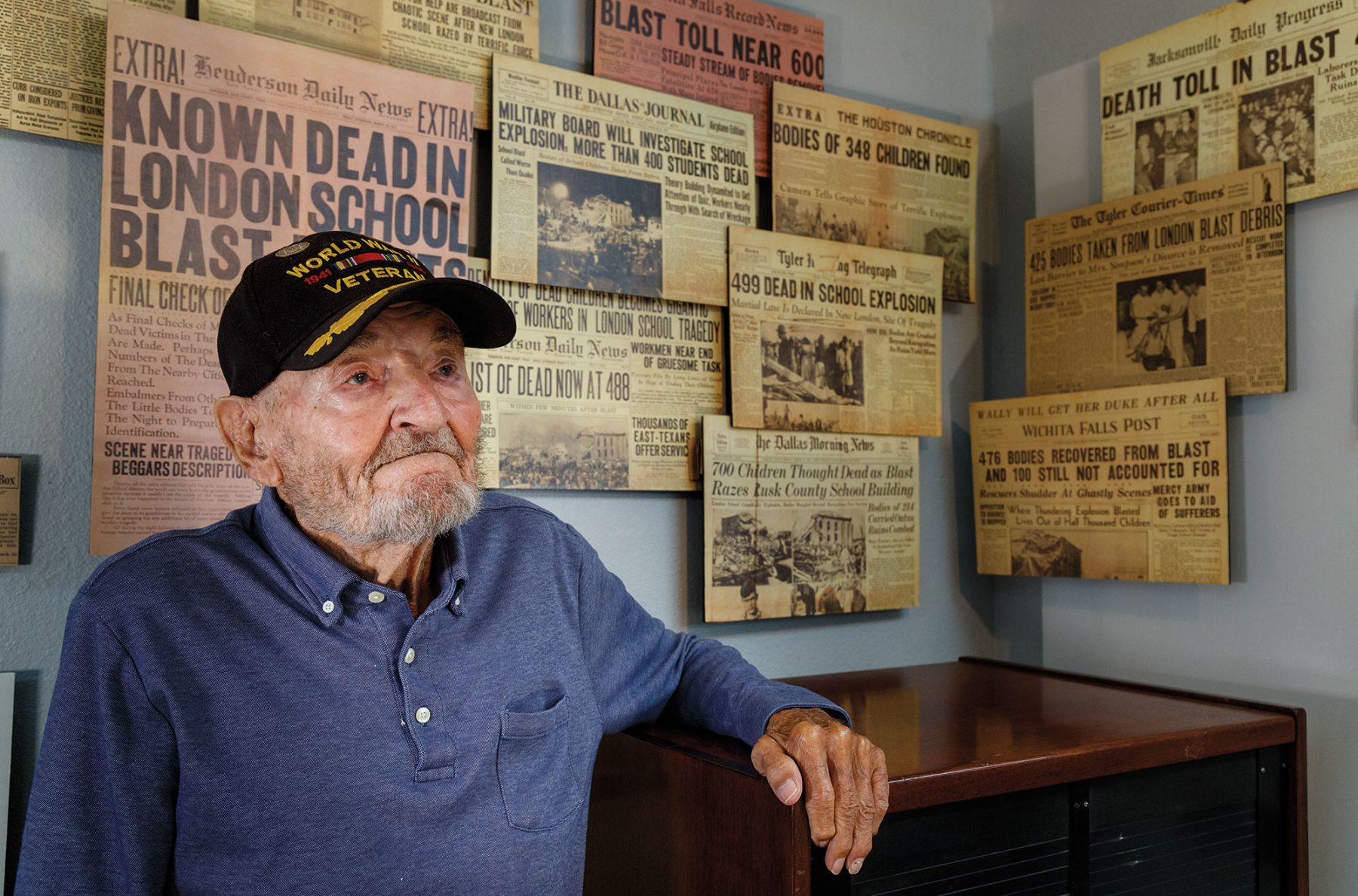 Newsman Walter Cronkite would, in his later years, recall it as one of the worst stories he ever covered. Morning dawned over New London on March 18, 1937, with clear skies and mild temperatures. Along Main Street, students made their way to school. Despite the pall of the Great Depression hanging over the nation, the future looked bright for the schoolchildren of Rusk County, thanks to a sea of oil and gas quivering below their feet.

Seven years earlier, thousands had celebrated as the earth shuddered and the Daisy Bradford No. 3 drilling rig shot a black fountain of oil into the sky. The town opened London Junior/Senior High School two years later, a showplace built on oil revenue. In 1934, the local football stadium became one of the first in Texas to get lights. But soon, the same congealed energy that made all that possible would literally explode, causing the most deadly school tragedy in U.S. history

A granite monument on Main Street memorializes victims, and in Pleasant Hill Cemetery, a numbing plethora of graves bear the same date—March 18, 1937. But to really understand the disaster and its aftermath, a visit to the New London Museum offers deeper perspective. Local survivors and other volunteers led an effort to convert a local café into a museum in 1992, establishing it in a modest building in the shadow of the memorial cenotaph, just across the street from what is now West Rusk High School. The museum still operates a café and soda fountain up front, a sweet touch to an otherwise somber topic.

“The whole world responded to this tragedy,” says volunteer archivist Becky Tyner, pointing to a display papered with messages of condolence that arrived in its wake—Japanese calligraphy, drawings from Swiss schoolchildren, telegrams from multiple countries. “This is the telegram from Hitler,” she says, noting a missive of sympathy in German bearing the infamous chancellor’s name.

The museum covers various facets of New London history, such as how local leaders tacked “New” onto the name when they discovered a London already established in Central Texas. But the museum’s greatest focus is the 1937 explosion. The story begins with the school’s decision to save money on heating by tapping into a nearby pipeline carrying cheap “waste” gas, the byproduct typically burned off by well flares. Before long, the equipment began to leak, and natural gas seeped into the school’s basement. Students and teachers reported mysterious headaches in the week leading up to the explosion, but the odorless, colorless gas continued to leak undetected. No one realized the school was sitting on a bomb. A defective belt sander would be its fuse. When a shop teacher plugged in the tool, it created a spark—and New London changed forever.

Townspeople heard a rumble and roar. They saw trees bend back and rubble arcing across the sky. For miles around, people thought lightning had struck.

Townspeople heard a rumble and roar. They saw trees bend back and rubble arcing across the sky. For miles around, people thought lightning had struck. Then they saw a smoke cloud rising. They hurried toward the sight, from farms, oil fields, and stores, curiously at first, then in terror as word spread that the school had exploded.

Inside the demolished building, students and teachers came to, half-blinded by dust. Some were able to stagger into the open. Hundreds of others lay in the rubble pile. As men and women arrived at the scene, they scrambled to pick at debris until their hands bled. Bystanders raced the injured to medical facilities in surrounding towns. Many went to Tyler, 25 miles away. Incredibly, a state-of-the-art hospital there sat with pristine equipment, abundant supplies, and zero patients. Mother Frances Hospital would be forced into action one day ahead of its planned gala opening.

At the blast site, the rescue effort grew and organized. Lines formed to pass peach baskets in and out to remove debris. The dead were laid together with scraps of paper or cloth over their faces. The number of them grew disturbingly as the stadium lights came on, and work continued through the night. Rain fell on the grisly scene. Reporters raced toward East Texas, including 20-year-old Cronkite, a cub reporter for United Press International who was in Dallas at the time. The Associated Press sent Felix McKnight, who penned a poignant opening line: “Today, a generation died.”

In the chaos of the aftermath, far-flung observers overestimated the death rate. The museum displays a number of front pages from newspapers that chronicled the tragedy in screaming headlines. The Boston Herald reported 670 killed, the Chicago Daily Tribune, 600. The final official count was lower but shocking enough at 294, including 16 teachers and students in each of the school’s fifth through 11th grades. 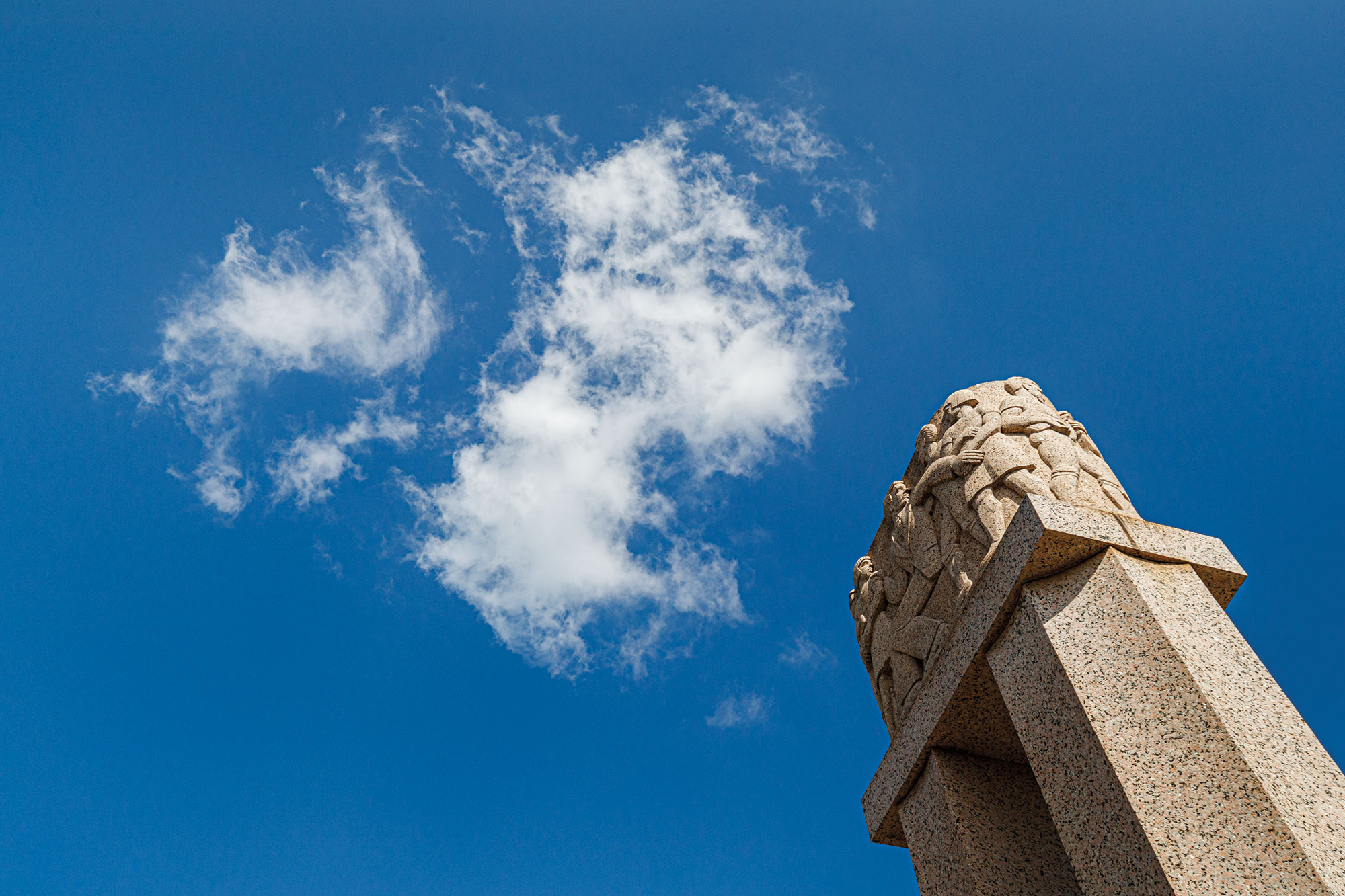 When the rescue, clean-up, and funerals finally ended, New London was left to reckon with its grief. Some residents coped like soldiers returning from war. They locked the memories up, never spoke of them. Some moved away. But as the years came and went, survivors slowly began to seek each other out, slowly began to talk. In 1977, Wayne Shaffer, a New London elementary student at the time of the explosion, helped organize the first of the memorials that continue to this day. They have become general reunions for all New London/West Rusk High graduates.

Near the back of the museum, a video exhibit titled Healing shows survivors telling stories of life after the explosion. One woman speaks of depression setting in every spring, another of her husband’s thrashing and grinding his teeth in the night. But the reunions marked a turning point for some survivors. They began to find peace. The wife of the man with night terrors tells of his metamorphosis: “He sleeps at night [now]. I can’t believe it.” 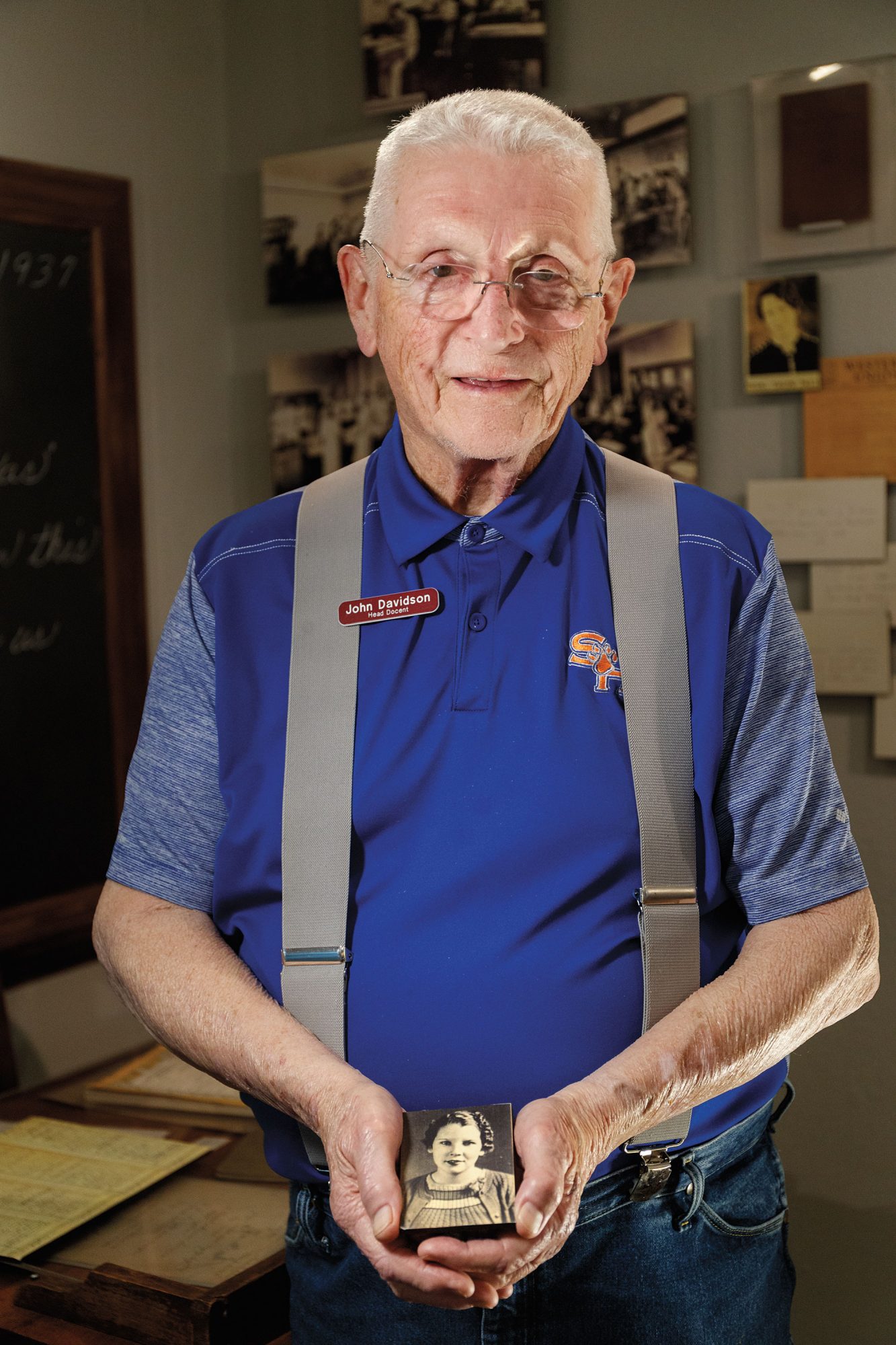 Survivors and witnesses of the 1937 blast are fewer and fewer. At the 2019 reunion, Robert Vernon Wiley, who was in third grade in 1937, was one of only two. The elementary school had already let out for the day, and Wiley was walking home with his brothers when he heard the blast. Now 91, he recalls the explosion’s volume, and how he continued home as his father ran in the other direction to help. He also remembers the many, many victims.

“Sixth grade was the one that lost so many,” he says.

Inside a large glass case nearby, a beautifully detailed model shows how the school looked in 1937, which is nearly identical to the current building rebuilt in 1939. On the wall behind the display, a large white board with black lines of paper-doll-style figures count the victims by grade level. The sixth-grade line stretches farthest—33 boys and 54 girls.

“It inundated that sixth-grade class,” adds Wiley’s daughter, Diana Crenshaw. “The yearbook next year had almost no sixth-grade students in it.”

Such memories are horrific, but Wiley looks well, wearing a blue suit and a ball cap that says “Happy 90th.” He lost his wife of 61 years, Marye, in 2012, but she left him with four daughters as well as grandchildren and great grandchildren.

Soon after the New London disaster, the state approved new safety regulations for natural gas use in public and commercial buildings.

John Davidson serves as a docent at the museum, where an exhibit is dedicated to his sister, Ardyth Davidson. Ardyth played on the school’s champion softball team before being killed in the blast. John was not yet born at the time of the tragedy. Like many other victim families, the Davidsons donated some of Ardyth’s personal items, including a fragment of the coat she wore to school on the fateful day. Fourteen-year-old Ardyth, an eighth-grader, had been the Davidsons’ only child. In their grief they decided to try for another.

“If [the explosion] hadn’t happened, I wouldn’t have been born,” John says.

The ramifications of the explosion extended well beyond New London. Fifth-grade survivor Carolyn Jones spoke in front of the Texas Legislature, asking that the danger of another, similar tragedy “be forever blotted out of existence.” Soon thereafter, the state approved stringent new safety regulations for natural gas use in public and commercial buildings. Other states and nations followed suit.

In the museum, a strange-looking cylindrical device reflects another change in state laws brought about by the explosion. Among all of the deeply human and emotional displays, it seems out of place. Yet Tyner looks down at it as if it is critical to the story. It is an odorizer, designed to add the pungent smell of rotten eggs to natural gas, as required by the new regulations.

“This is our legacy,” Tyner says. “These children died, now a lot of other people don’t have to.”

The next New London School Explosion and All-School Reunion is scheduled for March 19, 2022, the 85th anniversary of the tragedy.