The Tragic Tale of a 17th-Century French Colony’s Collapse

From shipwrecks to mutiny, explorer La Salle’s experiment was doomed from the start 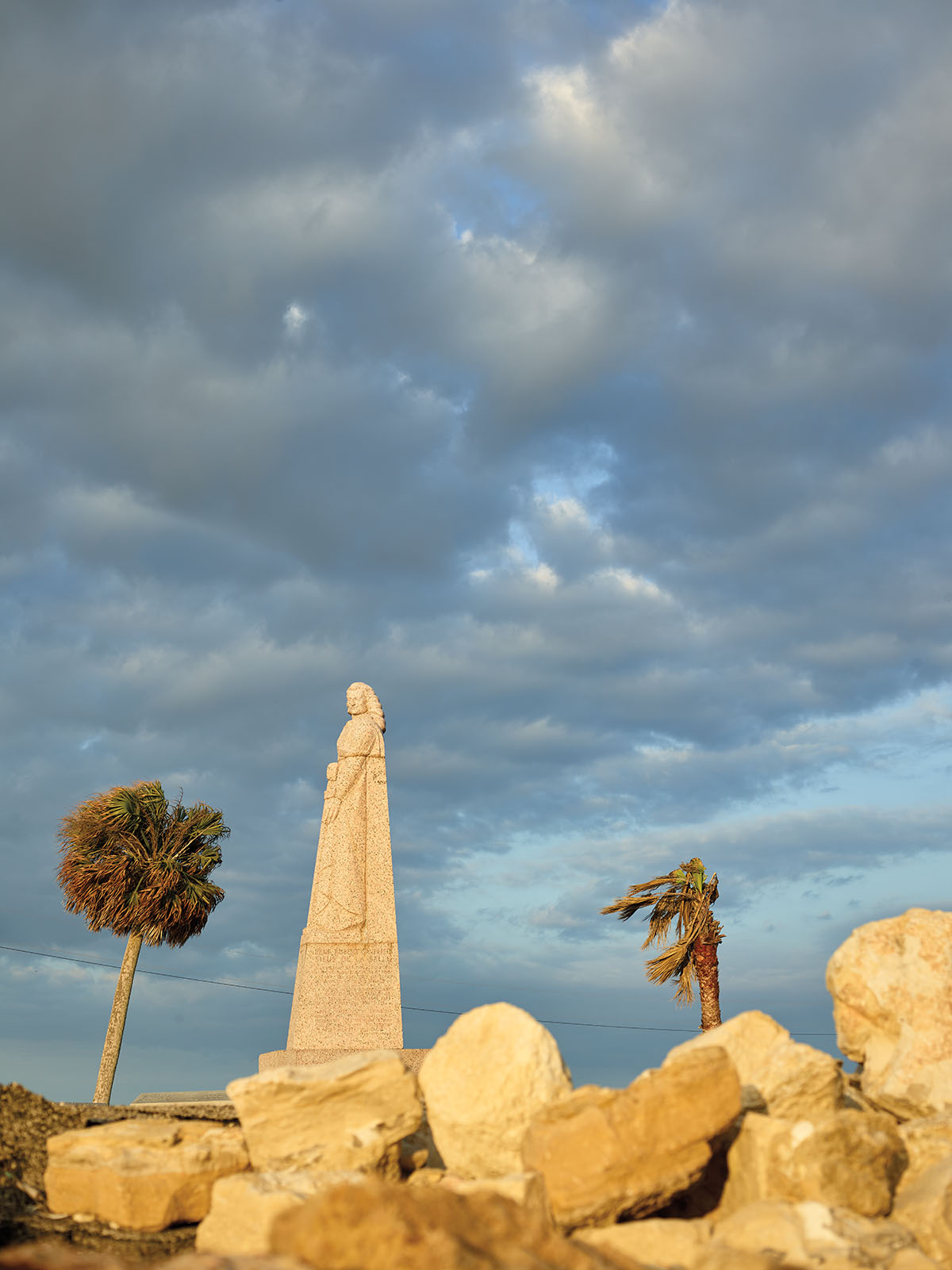 The Spanish soldiers were braced for a fight as they bushwhacked the brushy banks of Garcitas Creek, just a few miles inland from the Gulf of Mexico. It was April 1689, and Spain had been at war with France on and off for decades as the European rivals competed for colonial dominance in the New World. When word got out that a group of French settlers had built a village in present-day Victoria County—land Spain claimed as its own—the Spanish were determined to snuff it out.

But when the Spaniards climbed the creek’s banks, they didn’t encounter a colony of enemies. It was more like a wasteland: The settlement’s six desultory buildings and garden were abandoned. The pages of ruined books, along with various tools, were scattered about. Of the 200 people who lived there, the Spanish found only three moldering remains, including the corpse of a woman with a bit of dress clinging to her shoulder and an arrow in her back.

Such was the fate of the first European settlement in what we now call Texas—the result of an ambitious but flawed plan by French explorer René-Robert Cavelier, Sieur de la Salle. Though it failed, La Salle’s effort shaped the course of Texas history. Not only was the
colony—today referred to as Fort St. Louis—home to Texas’ first European wedding and first European birth, it also forced the Spanish to cast new eyes on the wilderness of Texas.

“The Spaniards had no interest in the region north of the Rio Bravo until La Salle established his French colony there,” says Stephen Hardin, a history professor at McMurry University in Abilene. “Once they became aware of the settlement’s existence, they made enormous efforts to eliminate it root and vine. Those efforts culminated in their missions, presidios, villas, vaqueros, and all the other trappings of Spanish culture. None of that would have occurred without La Salle.”

Hardin traces the French failure to La Salle himself, whose “dreams of imperial conquest always exceeded the reach of his talents and abilities.” La Salle had previously explored parts of Canada and the northern U.S., traversing thousands of miles and establishing forts and other outposts in the name of France. In 1682 he sledded and canoed from the Great Lakes down the Illinois and Mississippi rivers to the Gulf of Mexico. He claimed the Mississippi River drainage for France and named the territory La Louisiane for Louis XIV, the French king.

La Salle then persuaded King Louis to establish a colony at the mouth of the Mississippi. There, the French could contest Spanish and English colonial efforts, and also ship beaver pelts and other goods to France. With the king’s backing, La Salle set off from France in the summer of 1684 with around 320 people. La Salle, often described as arrogant, had a low opinion of his colonists—a collection of soldiers, priests, laborers, and merchants, along with about six women and several children. In his book The Wreck of the Belle, the Ruin of La Salle, the late historian Robert S. Weddle described many of the colonists as “drawn from the scum of the channel ports and beggars at church doors.” La Salle himself wrote that his colonists were, “untaught in any craft, intractable to any discipline.”

Trusting his ability to read the wilderness, La Salle assumed he would recognize the Mississippi’s mouth. But deceived by bad maps and a broken astrolabe, he overshot his target, arriving by accident at Matagorda Bay. During its seven-month voyage, the expedition lost one ship to pirates. Another ship returned to France, as planned. A third ship, Aimable, foundered on a sandbar in the shallow bay. When the expedition’s fourth and final ship, La Belle, ran aground in the bay and sank, nearly all of the colony’s supplies were lost.

The colonists used timbers from Aimable for building and relied on hunting and fishing for food. Their attempts to plant wheat and beans failed, Weddle recounts, and bison—no easy target—was their main protein. Some colonists were trampled. Some died from eating prickly pear fruit without taking off the spines.

Others died from overwork. After they’d used all their salvaged timber, La Salle ordered his men to cut down trees and drag them 3 miles across the tall-grass prairie. At least 30 men died doing this kind of work, “as much from [La Salle’s] punishment as from the affliction,” according to Henri Joutel, a La Salle lieutenant whose journal of the expedition was first published in France in 1715. Most fearfully, settlers would easily get lost in the featureless landscape—tall grass as far as the eye could see.

Dealings with the native Karankawas were also fraught. La Salle had traded with the Indigenous tribes in Canada, but on Garcitas Creek he was unable to make peace with the natives. In all, half of La Salle’s colonists died in the first six months.

What caused La Salle to make so many tragic mistakes? Some questioned his mental health. The captain of his flotilla wrote in a letter to the French court: “Everyone believes he is unbalanced.” The 19th-century historian Francis Parkman speculated La Salle’s travails during previous adventures, including a nearly fatal fever, “had unsettled his judgement.”

The French did manage a bit of civilization, with their birth, marriage, chapel, and masses. Still, within two years of arrival, the situation became so desperate that La Salle decided to seek help. On Jan. 12, 1687, he and his 17 most able-bodied men set out in search of rescue.

Their plan was to hike to the Mississippi River, then paddle north to a French outpost La Salle had previously established on the Illinois River. In his journal, Joutel remembered the pain of leaving behind the 23 remaining settlers. Both groups expressed their farewells “so sadly and tenderly it seemed as if all carried a secret foreboding that they would never see each other again.”

Amazingly, six of La Salle’s group reached the fort on the Illinois, 1,200 miles away, after a year of travel. But La Salle wasn’t one of them. Partway there, a mutinous faction within the party shot him in the head and left his corpse for the wolves. The exact location of La Salle’s murder remains a mystery. Weddle’s best estimation is that the tragedy occurred “perhaps east of the Trinity River.” 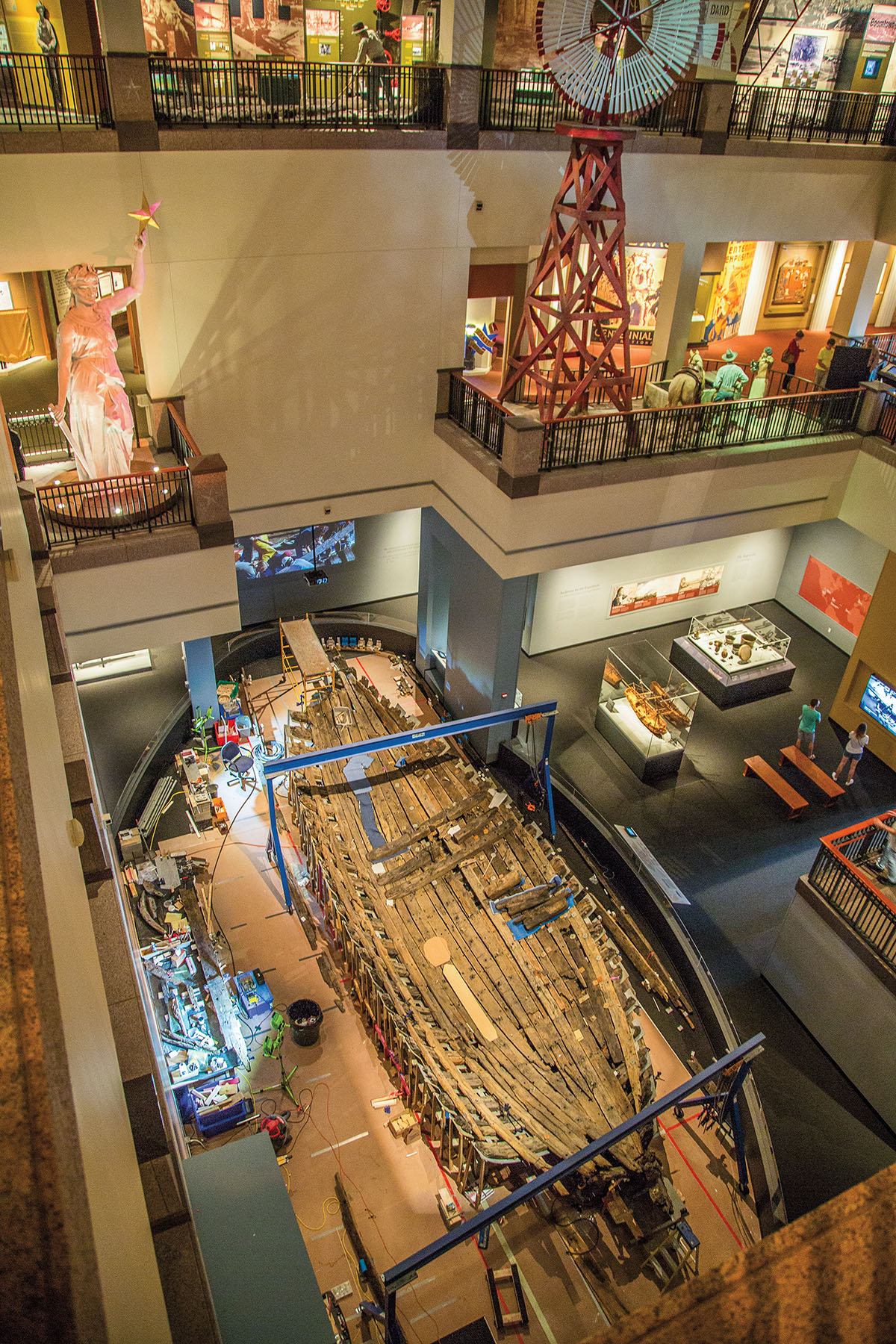 La Salle’s Garcitas Creek settlement is located on private property and closed to the public. There’s no historical marker nearby the site, which is off Farm-to-Market Road 616, about 22 miles east of Victoria. It “should be a national historic site like Jamestown or Plymouth plantation,” says Stephen Harrigan, a Texas author who penned a history of the state called Big Wonderful Thing. “As it is, it’s just a scraggly hilltop.”

But you can still get a feel for this important history. The Texas Historical Commission has established the La Salle Odyssey, a series of exhibitions in museums across the Texas Gulf Coast. Victoria’s Museum of the Coastal Bend has the richest exhibition, including seven of the cannons that La Salle left behind and facial reconstructions of two of the colonists, complete with names and biographies. The ship La Belle, which was recovered from Matagorda Bay in 1995 and meticulously preserved, is now on prominent display at the Bullock Texas State History Museum in Austin.

On Indianola’s narrow beach, near where the French tragedy began, a 22-foot-tall granite statue of La Salle was erected in 1938. Less imposing is the statue of him in downtown Navasota, 130 miles to the north, which makes an argument for being more or less the place of his death.

In Texas, after the Karankawas learned of La Salle’s death, and of the infighting among the French, they destroyed what was left of the settlement. The remaining colonists might have been saved, but the French soldiers in Illinois never learned of their dire straits. The six survivors of the Texas colony who made it to the northern fort, including La Salle’s brother, a priest named Jean Cavelier, kept their situation and La Salle’s death a secret. Cavelier’s silence was part of his scheme to claim La Salle’s furs and sell them back in France. He retired to his home “rich and intact,” in the words of historian Anka Muhlstein, who wrote the biography La Salle: Explorer of the North American Frontier.

The Spanish soldiers knew nothing of the colony’s tribulations when they discovered the abandoned French settlement. Moved by the scene, one of the Spaniards wrote a poem and recited it over the remains of the dead Frenchwoman. The poem, described by historian Stephen Harrigan as perhaps the first poem ever written in Texas, later appeared in a Spanish history of Texas:
“And thou, cadaver, oh, so cold /
Who for a time did make so bold /
And now consumed by wild beasts /
Which upon thee made thy feasts /
… For everlasting glory won /
Transient from this life has gone.”