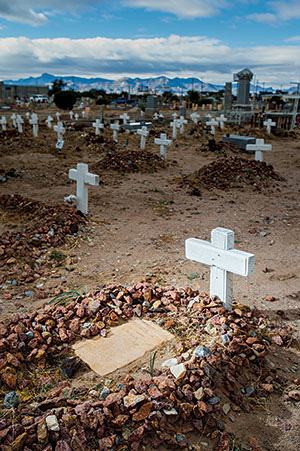 Concordia Cemetery spans 52 acres just north of Interstate 10 in El Paso. Regarded as one of the most historic “Old West” cemeteries in the country, Concordia is home to 60,000 burials.

Concordia Cemetery in central El Paso doesn’t look like much at first sight. The disparate collection of headstones, crosses, and mausoleums stakes out a 52-acre expanse of dusty desert in the shadows of residential neighborhoods, a carpet wholesale warehouse, and Interstate 10.

But when you step inside Concordia’s iron gates, the cemetery’s stories begin to emerge, thousands of them, like ghostly apparitions fashioning a colorful portrait. From notorious Old West gunslingers to pioneer priests, Buffalo Soldiers, and commoners of all backgrounds, Concordia Cemetery reflects the rough-and-tumble development of this West Texas borderlands outpost.

“Each one of these stones—no matter how big, how grand, how small—every one of these people has a story to tell, and they’re all chapters in the history book of El Paso,” says Melissa Sargent, a board member of the Concordia Heritage Association. “This has been such a unique mixture of people over the years. The diversity is incredible.”

The final resting place for some 60,000 souls, Concordia’s historic graves lie in various conditions amid clumps of salt cedar, cow-tongue cactus, and lechuguilla. Some markers are made of marble and carefully decorated and maintained; others are simple wooden crosses, hammered together by county probationers tasked with caring for the grounds. Many of the gravestones eroded long ago, their sandstone surfaces no match for the desert winds that whistle across the Franklin Mountains on the northwest horizon.

Concordia’s story starts with Rancho Concordia, founded by Hugh and Juana Stephenson in the 1840s. Hugh, a pioneer from Missouri, traded goods, invested in mines, and married advan-tageously to Juana Maria Ascarate, of Chihuahua, Mexico. The Ascarates deeded the newlyweds a plot of land north of the Rio Grande, where the couple built a small ranching community, including a chapel and cemetery constructed in 1854. Two years later, a pet deer gored Juana in the stomach, causing a fatal infection. Juana was the first person laid to rest in Concordia Cemetery.

Upcoming events at Concordia Cemetery include Walk Through History on Oct. 18 and the Día de Los Muertos Celebration on Nov. 1.

Over time, Rancho Concordia was subdivided among heirs and portions were sold, but the cemetery grew as an established burial ground. With the arrival of the railroad in 1881, El Paso’s rapid expansion prompted local officials to seek alternatives to their inner-city cemeteries. “Concordia was three miles outside of the big city of El Paso at that time,” says Bernie Sargent, Melissa’s husband and chairman of the El Paso County Historical Commission. “As the city was growing and swallowing up property, they kept exhuming bodies and moving them here, thinking this was going to be as remote as it gets.”

The constituencies of burgeoning El Paso staked claim to sections of the cemetery. Along with city and county sections, Concordia set aside areas for Jesuits, Catholics, Mexican Catholics, Protestants, Methodists, Jews, Mormons, Masons, Odd Fellows, African Americans, and Chinese. Nowadays, the cemetery hosts occasional burials in family-owned plots, but the facility is primarily an historical site. In 2005, the Texas Historical Commission designated Concordia a Historic Texas Cemetery. The nonprofit Concordia Heritage Association helps maintain the cemetery and raises money for improvements, including a new memorial to the 48 Buffalo Soldiers buried here. 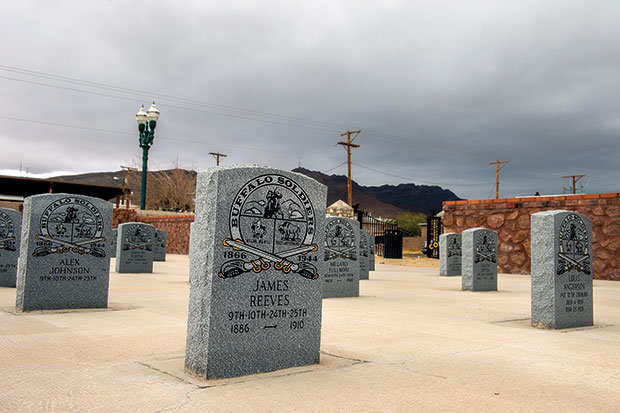 A memorial to the 48 Buffalo Soldiers known to be buried here.

Perhaps the most famous resident of Concordia Cemetery is John Wesley Hardin, the Bonham-born outlaw and folk hero who bragged of more than 30 killings, yet claimed to have slain only deserving victims or in self defense. Hardin moved to El Paso in 1895, shortly after serving a 17-year prison sentence for murder. He aimed to start fresh and establish a law practice.

In El Paso, Hardin took up with a married woman named Beulah Mroz. Accounts differ on what transpired as a result of the affair. Some say Hardin hired lawmen to kill Beulah’s husband, leading one of the lawmen, constable John Selman, to turn on Hardin. A different account is that John Selman’s son arrested Beulah for drunk and disorderly conduct, which angered Hardin and led to a showdown with the elder Selman. Either way, Hardin’s life ended on August 19, 1895, when the constable summoned the nerve to shoot Hardin in the back as he threw dice at the Acme Saloon.

Fittingly, Hardin’s grave is caged in a wrought-iron frame, which the Concordia Heritage Association erected in the mid-1990s to protect against theft and vandalism. A marker provides a brief Hardin biography, and visitors often adorn the grave with roses, shot glasses, whiskey bottles, and coins. Every August—the 16th this year—the John Wesley Hardin Secret Society gathers at the gravesite to remember the gunslinger with a reenactment of his death. (Ironically, Hardin’s cemetery-mates include John Selman and Beulah Mroz’s husband, Martin.) 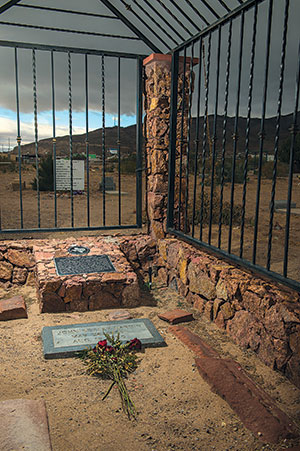 In contrast to Hardin and his Wild West escapades, Concordia Cemetery is also home to evangelical figures who sought to settle the frontier in the name of religion. Local Catholics and Concordia volunteers recently spruced up the cemetery’s Jesuit plot, adding a new marker honoring Father Carlos Pinto, known as “the Apostle of El Paso.” Gray slate markers for Pinto and other “Sons of the Society of Jesus” lie in a bed of neatly manicured crushed red granite. Born in Italy in 1841, Pinto arrived in El Paso in 1892 and guided the establishment of several Catholic parishes, along with schools for local children.

The cemetery’s ethnic and religious plots reflect fascinating chapters in the growth of El Paso and the West. The Chinese section—with graves marked by Chinese characters and a refrigerator-size incense funerary—recalls the influx of Chinese residents in the late 1800s. Drawn by work on Western railroads and other jobs, Chinese immigrants found their way to El Paso and neighboring Juárez when the federal Chinese Exclusion Act of 1882 tightened restrictions at other entry ports. Many of the Chinese families stayed, establishing a Chinese community that thrived into the 1920s.

Concordia’s Mormon section developed after 1912, the year Mormon farmers and ranchers who had settled in Mexico were kicked out of that country during the Mexican Revolution. The locals of El Paso welcomed the Mormons, many of whom stayed after first residing in a refugee camp. Unfortunately, their arrival coincided with a smallpox epidemic; the deceased were interred at Concordia.

Disease is a recurring theme at the cemetery, especially in the children’s section, where young influenza victims were buried during outbreaks in the early 20th Century. “People weren’t planning on burying their children back then and didn’t have a family plot, so many children were buried here,” Melissa says. “Most of the other old graves, nobody knows anything about them.” The family of a newborn who died more recently, in 1972, helps maintain the children’s section, including an eye-catching white bassinet adorned by pink roses.

The children’s section is a popular stop on cemetery ghost tours led by the Paso del Norte Paranormal Society on the first and second Saturdays of each month. Henry Flores, president of the paranormal society and one of the tour guides, says he brings along a doll for the spirits to play with. “We always get a reaction there,” Flores says. “We can hear the sounds of kids laughing or giggling at us.”

In recent months, ghost hunters and other visitors have reported apparitions of cowboy figures and an African American woman believed to be Florida Wolfe—a socialite and rancher known as “Lady Flo” who died in 1913—as well as the cemetery gates opening and closing on their own, Flores says. “Concordia is very unique because there are so many people in such a small space,” he says. “It’s the city of the dead.”

Yet history is very much alive in this enduring monument to El Paso’s past. It’s a worthy experience to visit. The stories will be waiting for you.