Charmed by its beauty, history, and character, writers have found inspiration in San Antonio for centuries 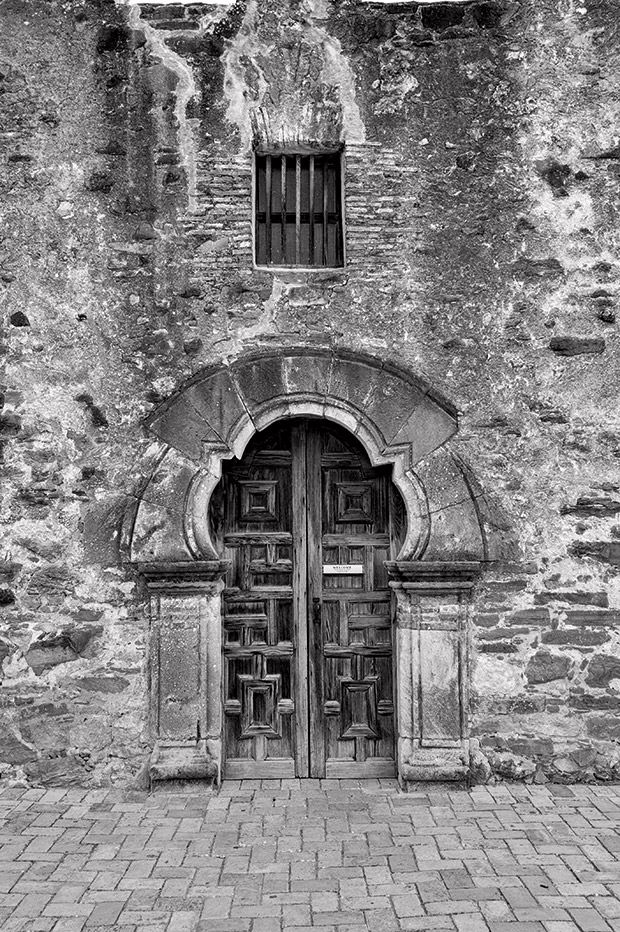 On a 1709 expedition into the unsettled territory north of the Rio Grande, Fray Isidro Espinosa of Nueva España wrote in his diary about the springs and river that later gave rise to the city of San Antonio, noting that the river could “supply not only a village but a city” and that “we called it the river of San Antonio de Padua.”

San Antonio by the Book

Gene Fowler will speak about his book Mavericks—A Gallery of Texas Characters at the Institute of Texan Cultures in San Antonio on January 10. Bryce Milligan’s Wings Press celebrated its 40th anniversary in 2015.

In the three centuries since the Spanish priest recorded those impressions, a multitude of authors have sought to capture and convey the city’s mystery and charm. I spent a stimulating afternoon last spring learning about those works and their creators, both historic and contemporary, from my San Antonio amigo Bryce Milligan. Poet, novelist, playwright, and all-around authorial top hand, Bryce edited the forthcoming book Literary San Antonio (Texas Christian University Press), an anthology that spans three centuries of writing about Texas’ numero uno travel destination.

We convened on the San Antonio River, of course, or more specifically, at the Commerce Street Bridge above the famed San Antonio River Walk. On the riverside walkway beneath us, visitors from all over the world strolled past shops, restaurants, and grand hotels, anchored since 1946 by Casa Rio, where the Mexican cuisine still draws crowds. A few doors down from where we stood on Commerce Street, Schilo’s, which dates to 1917, offers fare from another important ethnicity in San Antonio history, the Germans.

“It’s important to understand,” Bryce pointed out, “that the abundance of water here drew native peoples to the area long before the Spaniards established the five missions along the river between 1718 and 1731.” Collectively declared a World Heritage Site this past July, the missions will soon reflect an even greater degree of preservation and interpretation.

One of the earliest American chroniclers of the city’s water sources, Frederick Law Olmsted, the landscape architect of New York’s Central Park and the United States Capitol grounds, wrote in his 1857 book A Journey through Texas: “The San Antonio Spring may be classed as of the first water among the gems of the natural world. … You cannot believe your eyes, and shrink from sudden metamorphosis by invaded nymphdom.”

Just as Bryce and I were doing, many visiting writers surveyed the daily passage of San Antonio life from the Commerce Street Bridge. At various times the span has been named for both the poet Sidney Lanier and the short-story master O. Henry, who lived briefly in San Antonio in the 1890s while publishing his paper the Rolling Stone under his real name, William Sydney Porter. In 1894, The Red Badge of Courage author Stephen Crane reportedly jumped from the bridge to save a girl from drowning. According to his biographer Thomas Beer, before Crane’s death at age 28, he had intended to return to San Antonio and write another war novel, this one about the Alamo. 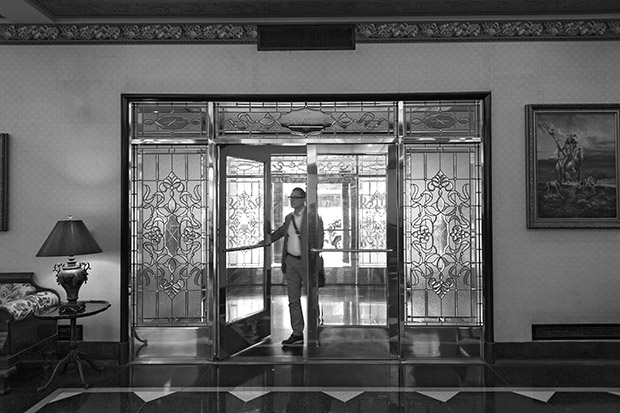 Sidney Lanier arrived in the city in 1872, drawn to San Antonio’s climate as a possible cure for tuberculosis. Though the disease eventually claimed his life, the Alamo City’s character proved something of a temporary elixir. “If peculiarities were quills, San Antonio de Bexar would be a rare porcupine,” Lanier marveled in Southern Magazine in 1873, noting that the city “bristles with striking idiosyncrasies and bizarre contrasts.”

As our own jaunt along the river neared the old Ursuline Academy and Convent, Bryce noted that San Antonio provided the setting for six O. Henry stories. A story titled “The Enchanted Kiss” is set at the convent, where a lovesick drugstore clerk, under the influence of absinthe, hallucinates such things as a 400-year-old cannibal masquerading as a Spanish nobleman masquerading as an Alamo plaza chili merchant. Today, the convent houses the Southwest School of Art, host to year-round exhibitions open to the public. Architectural historians believe that the site’s oldest structure, built in 1851, is the oldest extant example of pisé de terre work (a rammed earth construction technique) in the state. Other 19th-Century buildings at the school are made of native stone in a Gothic Revival style.

Several blocks to the southwest, at the corner of Laredo and Dolorosa streets, Bryce pointed out the small private house where O. Henry rested his head in San Antonio. Though marked with signage, it sits today looking relatively lonely and forlorn.

Bryce soon decided it was time to remember the Alamo, and we headed several blocks east to the shrine of Texas independence. Standing on the plaza by the iconic structure with its familiar parapet, we agreed that one of the best accounts of the battle ever written was the 2000 novel The Gates of the Alamo by Stephen Harrigan. Critics noted that even though readers knew the battle’s outcome beforehand, the story transcended spoiler alerts because Harrigan made the reader care about his characters on both sides of the tragic clash.

Robert Frost pondered his famous verses about “the road not taken” while staying at the Menger during several visits from the 1920s to the ‘40s.

“Ever since I first saw San Antonio at the age of seven, it has been a magical city to me,” Harrigan replied when asked about his works set in the Alamo City. “As far as I’m concerned, there’s no place in Texas that feels more ancient or more mysterious.” That sense of mystery and magic is also evident in Harrigan’s 2011 novel Remember Ben Clayton, which features some terrific scenes in the bar of the storied Menger Hotel, just south of the Alamo.

Open since 1859, the Menger has hosted many noted authors. Oscar Wilde stayed at the hotel in 1882, when he came to lecture San Antonians on “Decorative Art.” The San Antonio Light reported that the English author was attired in “a drab velvet jacket” and wore “white lace ruffles” and “scarlet stockings.”

Though less flamboyant, Robert Frost pondered his famous verses about “the road not taken” while staying at the Menger during several visits from the 1920s to the ’40s. The poet spent a lot of time at the now-defunct Rosengren’s Books, which in the 1930s was located on the ground floor of the Milam Building at Travis and Soledad streets. During one visit, he wrote to his colleague Louis Untermeyer, “I am deep in Texas history and don’t want to be bothered by any but the ghosts of Goliad and the Alamo.” Frost inscribed a photograph for the store, “Wishing to be remembered in the best of bookstores.” It’s now in a private collection. Later housed in the Crockett Hotel by the Alamo, the beloved bookshop closed in 1987.

But Frost would be glad to know that the art of writing in San Antonio is alive and well. “San Antonio was the first city in Texas to name its own poet laureate,” Bryce told me. “And the San Antonio Express-News is the rare daily to publish poetry on its Sunday book review page.”

The city’s first poet laureate, Carmen Tafolla, also served as the 2015 Poet Laureate of Texas. Her books include Curandera, Sonnets and Salsa, Rebozos, and This River Here—Poems of San Antonio. The last title, from Bryce’s publishing company Wings Press, is filled with rich evocations of San Antonio places, from the popular taverns called icehouses to the Mission San José. One poem recounts the mid-1700s treaty between San Antonio authorities and the Apache nation, which the two parties supposedly made official by burying weapons and a live horse in one of the downtown plazas. A plaque on the front of the Bexar County Courthouse commemorates the event. And again and again, Tafolla’s work returns to the meandering flow of the San Antonio River.

Today, the River Walk has been extended to create a 15-mile “linear park” in the heart of the city. Planned to eventually reach the Witte Museum, the “Museum Reach” section extends to the San Antonio Museum of Art and the Pearl, an eclectic dining, lodging, and shopping complex at the site of the former Pearl Brewery. The “Mission Reach” section includes hike-and-bike trails to four of the Spanish-Colonial missions along the San Antonio River to the south.

Another San Antonio poet published by Wings Press, Rosemary Catacalos describes herself as “an East Side Meskin Greek” in her poem “Swallow Wings.” Known for blending the history, folklore, and mythologies of her dual Mexican-Greek heritage into poems that often have San Antonio settings, Catacalos was the 2013 Poet Laureate of Texas. In poems like “Homesteaders,” dedicated to the Edwards Aquifer, she too pays homage to the life-giving resource that led to the city’s founding. “They came for the water …” she writes in the poem, “water flushed pure through the spine and ribs of the birth of life.” 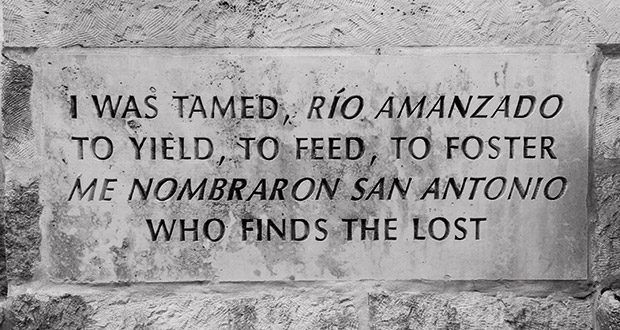 Plaque along the River Walk.

Another poem, “Restoration of the Cathedral,” honors the preservation of the mid-1700s San Fernando Cathedral on Main Plaza. Imagining that the historic site inspired Frost, Lanier, and countless other poets enriched the visiting experience on my most recent trip.

The last place Bryce and I visited on our rounds of San Antonio’s literary landmarks really blew up my boots. Today, the Aztec Theatre is a one-of-a-kind downtown music venue, hosting artists like Buddy Guy, Todd Rundgren, and George Clinton & Parliament-Funkadelic. John Phillip Santos, the first Mexican-American Rhodes Scholar, immortalized the 1926 venue in his remarkable 1999 memoir, Places Left Unfinished at the Time of Creation.

“On Saturdays,” Santos wrote, “all day long, with brothers, cousins, and friends, we watched Kung Fu triple features at the Aztec Theatre, a cinema palace in downtown San Antonio. The walls of the theater were decorated with colorful panels of Mayan and Aztecan glyphs, interspersed with the faces of various gods, all presided over by the Feathered Serpent God Quetzalcoatl, whose image surrounded the screen as Bruce Lee threw slow-motion aerial drop kicks. Coyolxauqhui, the moon-faced Mexican night goddess, her face pierced and gilded, stared down at us in the red light of the exit signs.”

What mere words, I wonder, could possibly be more puro San Antonio than that?