Live from the Hills 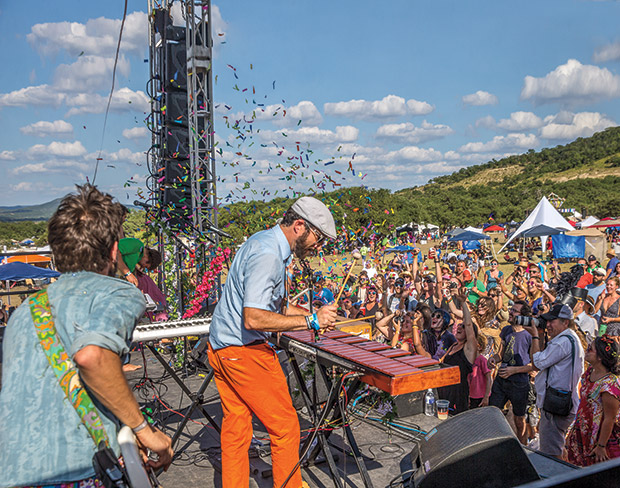 From a rise overlooking this Hill Country valley, the elements that create Utopiafest’s celebration of music and place come into focus: A band rocks a stage to the cheers of a bobbing crowd. Nearby, mountain-bikers saddle up for a ride and disc-golfers navigate a rocky hillside course. Hemming the festival grounds, campers lounge around their tents in live-oak groves that stretch to the valley’s edge.

Utopiafest takes place Sep. 29-Oct. 2 at Four Sisters Ranch, 1555 Lemond Rd., about six miles northwest of Utopia. Tickets range from $169-$199, including parking and tent camping; car-camping passes are $79; RV passes are $109. A ticket to the Thursday night pre-party is $49. Tent rentals available. Check out the website for a full schedule of bands and activities.

Utopiafest strives for music-festival bliss worthy of its name, which it takes from the neighboring hamlet of Utopia. Happening September 29-October 2 this year, the festival features about 25 bands on two stages over two days (along with a Thursday night pre-party). The eclectic lineup showcases independent bands in genres ranging from rock to hip-hop, folk to funk, and bluegrass to soul. This year’s performers include virtuosic jazz-jam bassist Victor Wooten, San Francisco indie-folk rockers Thao & the Get Down Stay Down, baritone rapper Chali 2na (from Jurassic 5), and Austin standouts like The Deer, Golden Dawn Arkestra, Balmorhea, Warren Hood, and Ruby and The Reckless.

“I don’t know of a genre we wouldn’t have, as long as they have a great, positive-thinking crowd and a live show that floors you,” says Aaron Brown, the festival’s director. “We want the live show aspect to be paramount, and we want to book bands that fit our vibe, which is thoughtful and caring, and that leave audiences with an experience they’ll never forget.”

To prevent the hassles sometimes associated with music festivals, Utopiafest caps ticket sales at 2,000 weekend passes. The results are navigable crowds, accessible stages, short or nonexistent lines for concessions and bathrooms, and plenty of camping space. The schedule alternates bands between the two stages to prevent overlaps, so fans can watch each performance without sound bleeding between them and without having to choose between acts. Also, the festival allows campers to bring their own food and beverages.

“We want it to be as seamless and enjoyable and stress-free as possible for everyone here,” says Travis Sutherland, who founded the festival in 2009 on his family’s century-old ranch, called the Four Sisters Ranch. “That’s our main goal.”

“The setting is the start of everything,” Aaron Brown says. “When we create a vibe, location is the most important thing to begin with. We have the best. It all has to fit here, but irony is a huge part of what we do, because you can bring [rapper] GZA from Wu-Tang Clan and put him in the middle of the Hill Country—and it works.

“We’re rooted in this Texas music scene,” he adds. “But it’s not your typical cookie-cutter Texas lineup. We want bands coming in from Mexico, Australia, Japan, and Europe. It’s amazing to get those bands to Utopia, and then you mix in the Austin scene. A lot of the bands we have out here, it’s their quinceañera—let’s introduce you to the core Texas music-lover audience, and then from there it’s a springboard.”

During last year’s festival, the crowd grew in size and energy on each day as the blazing sun waned and eventually set over the hills. Highlights of the weekend included a revelational rock-and-roll blast from Canadian band the Sheepdogs (as the Sheepdogs played, a prop plane flew over and dropped festival panties, koozies, T-shirts, and bandanas); Colorado-based Leftover Salmon’s sizzling bluegrass-rock jams, which hit a fever pitch when Austin fiddler Ruby Jane jumped on stage; an unannounced 30-minute surprise performance by breakout indie-troubadour Shakey Graves of Austin; a hillside wedding ceremony for two festival regulars, followed by their on-stage first dance during a performance by Austin band Wild Child; and a hypnotic sonic journey with Explosions in the Sky (famous partly for their songs on the Friday Night Lights soundtrack). During Explosions in the Sky, a laser-light show illuminated the hills encircling the amphitheater and culminated in a finale of fireworks over the stage.

The music gets underway in the early afternoon on Friday and Saturday, which leaves time in the morning for activities and exploration of the surrounding countryside. In the shade of a spacious event tent, yogis gather on their mats for morning yoga, complete with the soothing tones of a gong. Meanwhile at Camp REI, which occupies a corner of the festival grounds, the REI Outdoor School leads free guided hikes and mountain-bike rides (bikes and helmets provided). The two-mile hike ascends a nearby hill for a scenic view of the festival valley. (Watch out for errant frisbees from the disc-golfers on the nine-hole course!) The five-mile bike excursion follows an old two-track road that ventures into the hills, over rocky Spring Branch Creek, and across grassland pastures dotted with sotol, flameleaf sumac, mountain laurel, and prickly-pear cactus.

Spring Branch Creek flows into the Sabinal River, whose headwaters emerge about 14 miles north of the festival near Lost Maples State Park, a prime destination for hiking and camping. Flowing south to Utopia, the Sabinal provides a convenient opportunity for a refreshing dip in town at Utopia Park, where a dam corrals the river into a deep, clear swimming hole shaded by bald cypress and live oaks. Also nearby, about 20 miles west of Utopiafest, Garner State Park is a picturesque haven for a hike along the Edwards Plateau and a swim in the Frio River.

Utopiafest schedules children’s activities throughout the festival, such as a fossil hunt and a hula-hoop jam, as well as informative presentations, including a tree talk by the Texas A&M Forest Service and a lesson on the history of the Four Sisters Ranch presented by the four sisters who own the ranch. Founded in 1918 by Sutherland’s great-great grandparents, Will and Mattie Fisher, the ranch raised angora goats historically but now runs cattle and is branching into ecotourism, including two rental cabins, primitive campsites, and—beyond what the Fishers could ever have imagined in 1918—Utopiafest.

“Frankly, we were a little taken back with the idea of a festival,” says Diane Causey, Sutherland’s aunt and one of the ranch’s namesake sisters. “The first festival, we were pretty sure terrible things were going to happen, but none of them did, so we’ve been very pleased with the crowd that’s come and how they’ve treated our ranch. We’ve found that people are very appreciative of us sharing this beautiful spot.”