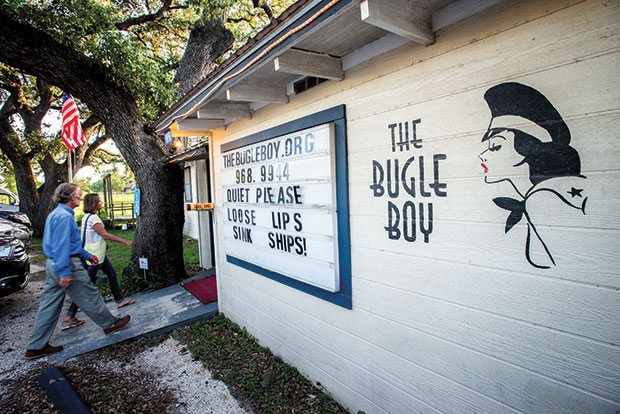 In a modest space that doubles as an office and the green room for performers, singer-songwriter Sara Hickman relaxes momentarily and reflects. “There’s a lot of love invested in this place, and it makes what I do exquisite,” she says. As an acclaimed recording and touring artist, this 2010-2011 “Official State Musician of Texas” has played prominent concert halls nationwide. Yet here, minutes before gracing the little stage beyond the door, Hickman professes high praise for The Bugle Boy, an acoustically pristine listening room in La Grange.

The Bugle Boy is at 1051 N. Jefferson (TX 77) in La Grange. For information about the listening room, the Soldier Songs and Voices program, Swan Songs, the Talent Trust scholarship, community outreach programs, and upcoming concerts, call 979/968-9944.

“There’s this camaraderie among all the folks here,” she explains. “You’re in this old wooden building, and the sound is so beautiful, and the people are attuned, and it’s all about the music. Being in this place makes me happy that I chose to be a songwriter.”

Specializing in the eclectic blend of musical styles commonly dubbed “Americana,” this 80-seat venue has hosted approximately 110 shows annually since 2005. “We like real, soulful, honest music performed by the person who composed it,” says Lane Gosnay, the founder and executive director. “We value that form of expression, that art.”

Though not located in a big city, The Bugle Boy attracts big talent—thanks to that reverence for song. Most of those are Texas-based artists, such as Hickman, Joe Ely, Ruthie Foster, Marcia Ball, Ray Wylie Hubbard, Shinyribs, and many others. But the booking also regularly includes luminaries from beyond the Lone Star State, such as Janis Ian, A.J. Croce, and Greg Trooper.

Staffed primarily with volunteers, this grassroots enterprise opens for only three hours per event, usually on Fridays and Saturdays, with concerts ending at 10 p.m. Although beer and wine (as well as soft drinks and snacks) are sold before shows and during intermissions, The Bugle Boy de-emphasizes alcohol consumption as a business model. It also expects audience members to be respectfully unobtrusive during songs: no chatter, disruptions with food or drink, or cell phones. Indeed, a large sign near the main entrance advises, “QUIET PLEASE. LOOSE LIPS SINK SHIPS!” 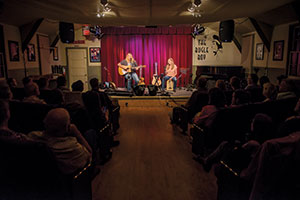 That allusion to wartime history fits the 70-plus-year-old building that houses The Bugle Boy, which takes its name from a 1941 hit song. The simple rectangular structure originated as a U.S. Army barrack at Camp Swift, near Bastrop, during World War II. Then in 1948 the Sons of Hermann Lodge purchased it and moved it to the current location to be a meeting hall. Fifty-six years later it changed hands again when Gosnay and friends brought The Bugle Boy into being. While those three incarnations might seem unrelated, this timeworn edifice has consistently united individuals sharing common bonds—military, fraternal, or musical.

Today a friendly sense of mission prevails among staffers and supporters at this haven for songwriters. “The connection that this environment allows, between the artist and the audience, is so visceral and so important,” says Gosnay. She credits the commitment of local aficionados who have embraced and nourished her original vision. “People started showing up and volunteering. They adopted this place as something that mattered to them.”

According to Heather Eilers, the community outreach and volunteer coordinator, “It sort of happens organically with folks that are fans of this music. They come to shows, observe how we operate, and ask how to volunteer.”

That same spirit extends to multiple community service programs maintained by The Bugle Boy Foundation, a nonprofit organization since 2008. The president emeritus of the board, David Vogel, notes, “Music is the draw that gets people here, but it’s about more than just the concerts. We have really gotten involved in helping people, and we’ve become a community asset.”

“The connection that this environment allows, between the artist and the audience, is so visceral and so important.”

One example is the Soldier Songs and Voices program, exclusively for U.S. Armed Services veterans. Two Sundays per month it utilizes the venue for songwriting and guitar-playing workshops that promote musical expression as therapy. Another effort is Music and Memory, which, Gosnay explains, “creates personalized playlists on iPods provided to nursing home residents, especially people with dementia and those who are withdrawn.” There are also separate programs to assist selected artists with financing recording productions, to present music education sessions in public schools, and to archive documentary material at the Briscoe Center for American History at the University of Texas.

Meanwhile, now seated on the stage, Sara Hickman cradles an acoustic guitar and sings, accompanied only by Kristen DeWitt on harmony vocals. On the final chorus, the two women lean toward each other, their voices blending into a breathtaking moment of sonic beauty.

On the rear wall to their right, a small placard with hand-drawn lettering urges, “Believe in the Magic.” That simple imperative perhaps succinctly explains the phenomenon that is The Bugle Boy, a place where believers—producers, performers, and patrons—nurture their faith in the power of communion through music.