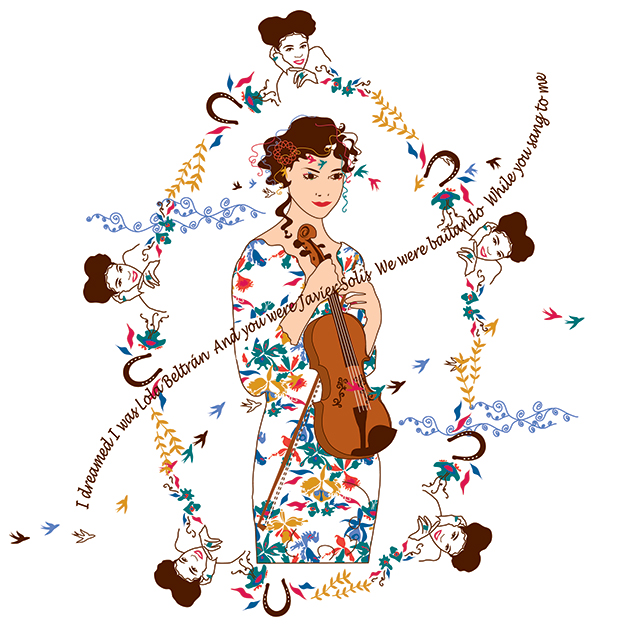 Austin musician Carrie Rodriguez bridges two worlds with her most recent album, Lola, which made both Rolling Stone’s list of best country albums and NPR’s list of best Latino albums in 2016. The diverse scope of the bilingual album is exactly what the songwriting fiddler had in mind.

Starting in May, Carrie Rodriguez will host a monthly residency at Austin’s Cactus Cafe with various musical collaborators. Keep up with Rodriguez at www.carrierodriguez.com.

“I wanted to make a ‘Tex-Mex’ album, but one that is authentic and relevant to me—a modern-sounding Tex-Mex album,” says Rodriguez, the daughter of Austin painter Leslie Nail and the late expat songwriter David Rodriguez. “I was thinking about how I fit in in terms of finding the meeting place of the two different cultures in my background. I’m a fiddle-playing Chicana who grew up with artist parents. That’s my story.”

A classically trained violinist, Rodriguez embraced fiddle-style playing and her Texas country roots in college, leading to a collaboration with singer-songwriter Chip Taylor that produced four duet albums. As a solo artist, Rodriguez has made five albums—a blend of folk, roots, and country featuring her violin
and warm vocals—and built an international following with touring strongholds in the upper Midwest, the UK, and Italy.

With Lola, Rodriguez explores her Mexican heritage, especially her great aunt Eva Garza (her father’s aunt), a ranchera singer and movie actress from San Antonio who was popular throughout Latin America from the late 1930s to the 1960s. (The album’s title is a nod to one of Garza’s contemporaries, ranchera singer Lola Beltran.)

Rodriguez and her partner/guitar player Luke Jacobs have a 1-year-old son, Cruz, who was born just as they were putting the finishing touches on Lola and heading out on a European tour.

Q: Coming from an artistic family, did you feel predestined to be an artist?

A: I wouldn’t say pressured to become one or anything, but I certainly felt like being an artist was normal. That was my everyday. I woke up in a house that smelled like turpentine and was full of these wacky, wild paintings. My mom painted every day at home in her leggings with holes in them and paint splattered all over, listing to operatic music blasting through the stereo. That’s what I knew as normal. It was my idea to play the violin; I wanted to do that and no one pushed me into it. But I certainly always felt like that was a perfectly viable career choice. And of course my father was a songwriter. So it was my normal, for better or for worse.

Q: What inspired you to pursue the Mexican sounds and themes of Lola?

A: I was just reacting to what was going on around me, reading the news about little children coming across the border in droves. It was something about the time and what was going on in our country, combined with this longtime dream I’ve had of recording songs in Spanish that my aunt sang and songs that were inspired by her.

Q: When did you discover Eva Garza’s music?

A: I was in my early 20s. My grandmother talked about her my whole childhood—her sister who was this famous singer and knew all of the Mexican movie stars and was in films. But I never quite got it until I heard her. My grandmother burned me some CDs from the old vinyls she had. I was living in New York at the time, and I just remember the moment of putting her music on in my apartment and sitting down on the couch and being overwhelmed with the power of her voice. She sang these dramatic songs with full orchestras behind her. I remember having goose bumps all over my body and thinking, ‘I can’t believe this is my blood, I am related to this woman.’ I never met her because she died in her late 40s, and she was also quite a bit older than my grandmother.

Q: How much of the year do you spend on the road?

A: Before I had a baby it was at least two-thirds of the year, if not three-quarters. I’ve definitely scaled back, at least while he’s really little. And I think my next focus will be on how to cultivate more of a local music life for myself because I do a show in Austin once a year, maybe twice a year, but I’ve been making my living from traveling for my whole adult life, playing music all over.

Q: What are your favorite venues in Texas?

A: I love the Kessler Theatre in Dallas. They’ll pair me up with cool people too, which is fun. I got to do a show with Terry Allen, which I loved. There are two venues in Houston that I really enjoy. One is actually in The Woodlands, called the Dosey Doe. They get really high-caliber national songwriters. Then the Mucky Duck in central Houston—I’ve been playing there since I started out with Chip.
In Austin I love playing at the Cactus Cafe, and I love going to see shows there, too, because the sound is really good, and I love the intimacy. I feel like you really get to know the artist better than at a larger venue. There are also a few great listening rooms in smaller towns. There’s one called the Bugle Boy in La Grange. It’s got world-class sound, really nice comfortable seating, and it’s very intimate.

Q: What are your favorite roadside stops while traveling Texas?

A: To go on tour anywhere east, we’d end up going up and over to I-30 and east that way. And in Texarkana, Bryce’s Cafeteria is unbelievable. I mean like fried chicken and the best pies and butterbeans. … The drive to Dallas is the worst drive in the country, but the one thing that makes it palatable for me is stopping at the Czech Stop in West and getting kolaches. Another place I would stop, heading out into the Hill Country, is Cooper’s barbecue in Llano. It’s so fun. I love the people that go—such an interesting mix of farmers and ranchers from out there and city folks on their way somewhere.

Q: Who are some of your biggest musical influences?

A: Townes Van Zandt is a huge influence and somebody that my father used to play with, so I’ve known his music since I was little. He is huge for me, and I still listen to Townes on a regular basis. I’m a big Lyle Lovett fan, and Lucinda Williams, and I love John Prine. Aside from that, I have pretty eclectic taste. I love all different kinds of world music, Indian music, classical music.

Q: What’s it like being a touring musician with a young child?

A: It’s challenging. It was a little easier when the baby was inside my belly because now he runs. I’m learning as I go. We just did a month-long tour in Europe with a 1-year-old, walking, which was definitely more challenging than being on the road with a 6-month-old, who’s just sitting. But that being said, it’s pretty amazing to watch your 1-year-old eat stinky cheese and pasta and laugh at an Italian dinner and say, “Bene!”