His latest project, Hotel Dryce, reflects a fresh and modern Fort Worth vibe 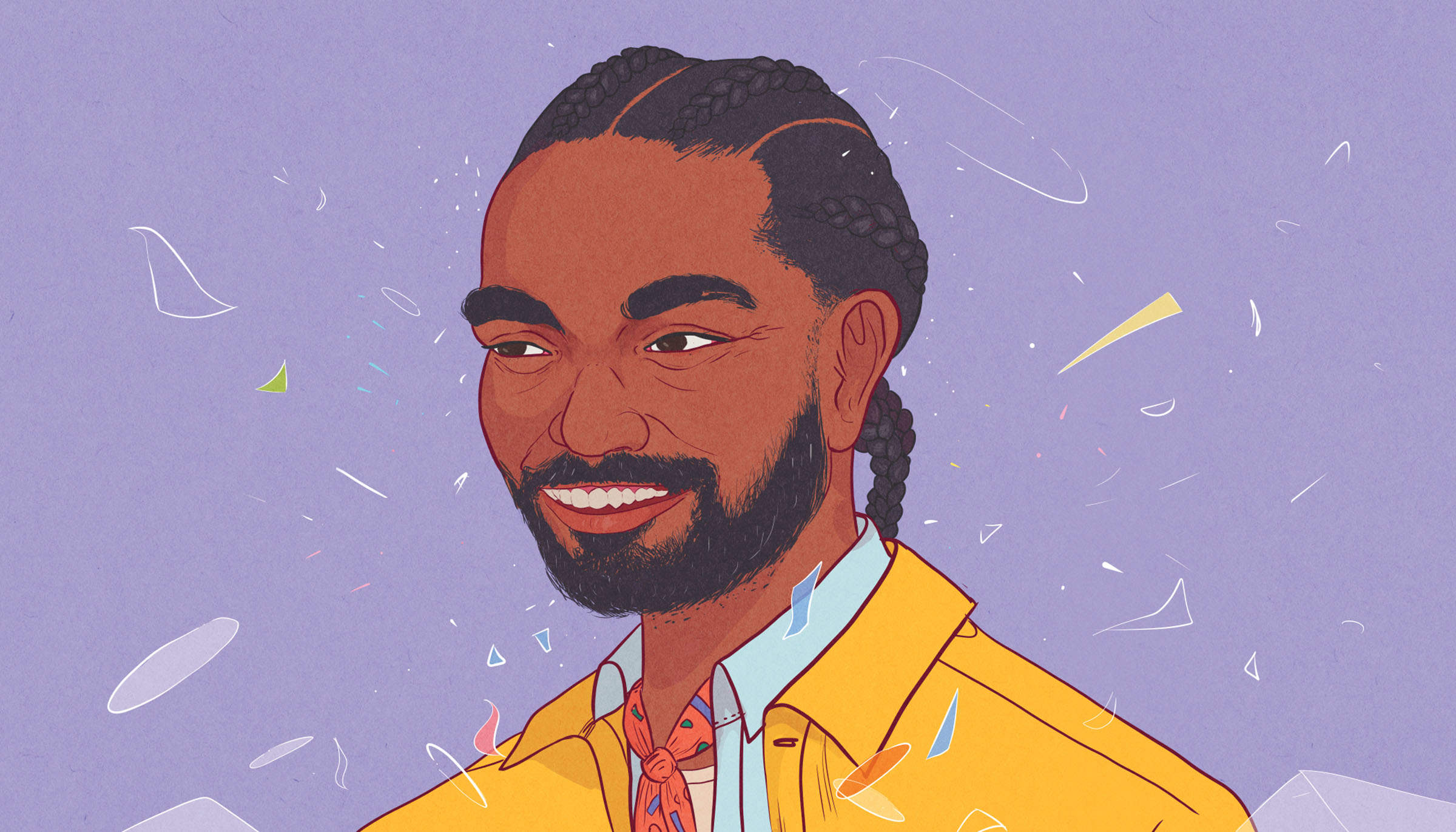 In the decade he’s called Fort Worth home, Jonathan Morris has fashioned enough new roles for himself to make most of us a little breathless.

In 2014, the social media manager-turned-entrepreneur opened Fort Worth Barber Shop near the Cultural District. Set in a former automotive garage made of cinder blocks, Morris’ shop offers a haircut and hot-towel shave along with an old-fashioned setting for conversation and connection.

The Barber Shop immersed Morris in the network of creatives who’ve been building a small-business scene with a youthful and modern vibe that goes beyond the cowboys-and-culture theme for which Fort Worth has long been known. He channeled that energy into his next project, Hotel Dryce, a boutique lodging that opened in the Cultural District in August.

Morris’ projects caught the attention of the Magnolia Network, the TV streaming service created by Waco’s Chip and Joanna Gaines of Fixer Upper fame. Morris debuted on the network in July as the host of Self Employed, an unscripted show featuring Morris interviewing other entrepreneurs around the nation about their challenges and how they turned dreams into realities. Kicking off the series, Morris visited Dallas entrepreneur Valery Jean-Bart, an engineer who was inspired by his late mother to create a bakery called Val’s Cheesecakes.

Self Employed channels Morris’ boundless enthusiasm for both entrepreneurship and his adopted hometown. Though his parents and grandparents are from Fort Worth, Morris grew up in San Antonio and Austin before his folks moved to Corinth, near Denton. Morris attended college in Atlanta and moved to Fort Worth in 2012 when he married his high school sweetheart, Katherine Morris, a fellow entrepreneur who recently opened Cherry Coffee Shop in Fort Worth’s Near Southside neighborhood.

“It was a time when people who’d moved away from here to do something else began coming back to find their footing again,” he says. “It’s when Fort Worth really found this new welcoming energy, something that feels young and progressive.”

TH: What about Fort Worth turned you into a de facto ambassador, to the extent that you had the Visit Fort Worth logo tattooed on your arm?
JM: It’s so cool how Visit Fort Worth decided to broaden the story told about how progressive the city is now and how inclusive—a story that was happening long before Black Lives Matter. Back in 2017, I went with Visit Fort Worth to SXSW to help spread the Fort Worth message that there is space for you. We have to tell all people they are welcome here. It’s important they understand Fort Worth isn’t just one thing, or the place they thought they knew. It’s about art and music; it’s about Western and cowboy culture, yeah. And now it’s also about the small-business scene and the visionaries who are creating the Fort Worth they want to live in.

TH: Where do you like to send visitors to explore the new Fort Worth vibe?
JM: We love going to eat at Tinie’s, a really cool Mexican restaurant and bar on South Main. And I’m drinking one espresso a day all over town. I love Lazy Daisy, Black Coffee, Roots Coffeehouse, and of course, Cherry Coffee Shop. Morgan Mercantile is the Near Southside shop selling all the great Panther City Provisions goods. For live music, you have to go to Tulips—every genre is covered. Our art community has gotten so strong. I love the artists that Cuff Link is showing on the Near Southside, and we have Fort Works Art literally a few steps from the Dryce.

TH: How did your take on Fort Worth translate into Hotel Dryce?
JM: It’s that place of juxtaposition and harmony where everything meets, where I want to play a role. A hotel is a great canvas for that picture. In 2018, I was talking to my friend Allen [Mederos, co-owner of Hotel Dryce], and we agreed Fort Worth was missing a small boutique hotel with a sense of place. When I’m traveling, I want to stay in a place that reflects where it is. We wanted the traveler to come to Fort Worth and find what’s reflective of why locals like me love our city. We couldn’t find an old motor court, but this old dry ice warehouse building had just gone on the market. The 1960s cinder block building was perfect for the core of the hotel. The old building frames the lobby bar and patio, and we built the three-story hotel with 21 rooms around it. We could marry the old and new in a way that’s utilitarian but has plenty of luxury without screaming pretension.

TH: How does Hotel Dryce convey a sense of place?
JM: We’re right across the street from Dickies Arena, so we welcome guests in town for concerts and also people here on business. But this is also meant to be a place for the community. We aim to be a beacon for creative types with our lobby culture. And we’re a place where you see Fort Worth does have artists of color. We have work by five of them throughout the hotel, working in all different mediums. Especially in the Lobby Bar, the artworks help people understand the essence of this authentic Fort Worth, who and what we are becoming. There’s one photo taken last summer during the BLM protests that I want people to remember. There’s a diptych by the same artist [Guillermo Tapia] that captures modern Black cowboys and cowgirls, something you don’t see expressed often. There’s a dance-and-music video, always on loop in the library, from a dance professor [Adam McKinney] at TCU.

TH: How did your TV show, Self Employed, come about?
JM: Red Sanders with Red Productions here in town reached out to me when he’d met with the Magnolia team in 2019. He and I had worked together before, and he pitched Magnolia on a barber shop idea, which turned into a show on entrepreneurs. I was never seeking to be on TV! But I was blessed to get to be myself, and once I got past the idea of being in a room full of cameras, it was great.

TH: What do you want the show to achieve?
JM: I wanted to find people who are in good standing in their communities, so we found those with interesting stories who would really inspire others to start their own businesses and also encourage people to support these businesses. When I meet other entrepreneurs, there’s a kinship, and it was wonderful to find people to connect with. Once we found them, the rest was me sitting down and learning about what they did and the challenges they encountered.

We’ve done eight shows, starting with the pilot we filmed last September [2020]. We shot several episodes here in the DFW area and then in Atlanta and Detroit. Just like the hotel, and everyone who did the work here, the show is about local makers. I’m really proud of it. It has been such a cool learning experience, and I hope we get picked up for another season.

TH: When you get a chance to wander away from home, where are you exploring in Texas?
JM: On a couple of trips to Houston lately, with friends who know how to guide me, I’ve fallen in love with meals at Nancy’s Hustle. That may be my favorite place to eat in Texas right now. Tipping Point, a boutique and coffee place in Houston, really inspires me, too. And when I go west toward the mountains, I’m planning to stop at Hotel Turkey. The owner was just here at the Dryce, and I’m excited about the exchange of energy we are all finding in building pockets of community with like-minded people.

TH: What’s next up for you?
JM: Katherine opened up Cherry Coffee in April, I wrapped up the TV show in May, and then the hotel opened in August. So our motto right now is, “Nothing new in 2022.” I love the journey of building and creating—it drives me in a lot of ways. But I need time to soak this all in.

Find Jonathan Morris on Twitter, @JonathanDFW. His TV show, Self Employed, is on the Magnolia Network on Discovery+. For more on Fort Worth Barber Shop, visit fortworthbarbershop.com, and for Hotel Dryce, hoteldryce.com.