For the love of life, land and cowdogs

John Erickson, the cowboy-writer behind Hank the Cowdog 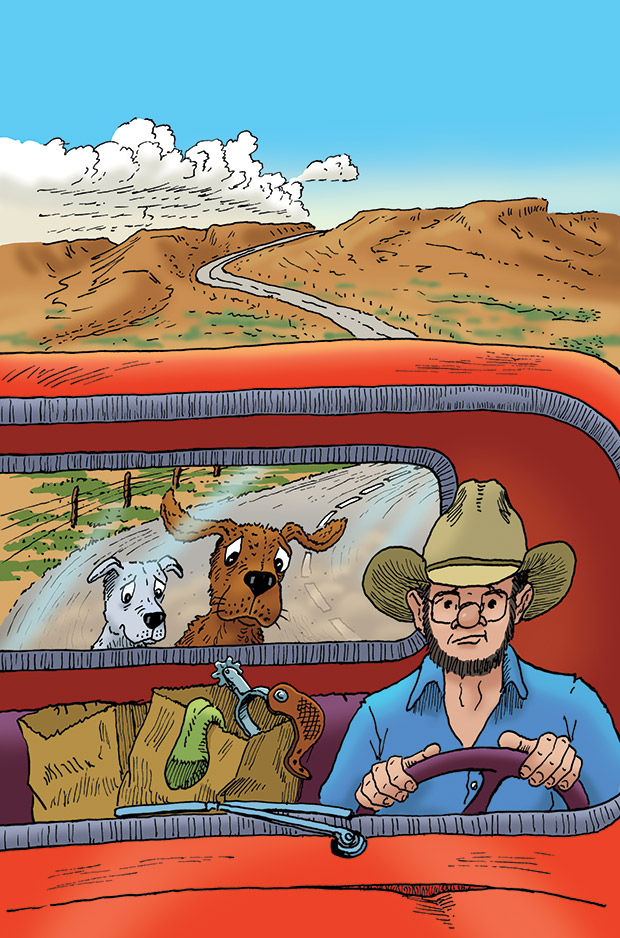 You’d be hard-pressed to find a Texas schoolkid from the mid-1980s forward who doesn’t crack a smile at the mention of Hank the Cowdog. Hank, the self-assured yet blundering hero of John Erickson’s long-running Hank the Cowdog series, narrates his adventures as the self-appointed “head of ranch security” on a Panhandle cattle ranch.

Millions of readers have followed along as Hank has tackled one mysterious case after another—dead chickens, silver monster birds, trashcan-raiding raccoons—all the while chastising his middling deputy Drover, squabbling with Pete the ranch cat, and nurturing his unrequited love for Beulah, the collie next door.

Erickson wrote his first Hank the Cowdog story for The Cattleman magazine in 1982, creating Hank and company from his observations as a working cowboy on ranches near his hometown of Perryton and in Oklahoma.
In October, Erickson published the 68th Hank the Cowdog book, The Secret Pledge.

Along with 25 non-Hank books about cowboy life and the Panhandle, Erickson has also written six Hank musicals, including one recently presented in China. In all, Erickson has sold more than 9 million books through his independent Maverick Books publishing house.

Erickson, 72, still travels around Texas frequently for Hank the Cowdog programs, including banjo and mandolin performances with his wife of 49 years, Kris.

Q: Is Hank’s ranch based on your ranch (about 40 miles south of Perryton in the Canadian River Valley)?

A: Hank’s ranch is a combination of my ranch and a ranch I used to work on south of Perryton in the Wolf Creek Valley. I wrote the first Hank book when I was working as a cowboy on that ranch.

Q: Is Hank modeled after a specific dog?

A: He was a ranch dog that belonged to our nearest neighbor. He was an Australian shepherd, and he wanted to be head of ranch security. He tried to help but he was always in the way, and the cowboys screamed at him all the time, “Get in the pickup, go to the house, get out of the gate!” Poor old Hank never understood why people were yelling at him. He had this hurt look on his face, and I thought that was a funny character. He had no self-knowledge, and he had grandiose delusions.

Q: I understand you attended the University of Texas and Harvard Divinity School. How’d you end up returning to Perryton to cowboy?

A: I was curious to know if a kid from the Panhandle could compete in that world and so I got accepted into Harvard Divinity School, and I went for two years. I originally thought that I might go into the ministry, but I decided that that was not my language, and so we moved back to Texas, and I worked at various menial jobs that allowed me to write in the morning.

When I was in high school, I couldn’t wait to get out of Perryton and see the bright lights, and I never thought that I’d go back. But one day when I was walking through the snow in the Harvard yard, I looked around and it struck me that I would never be one of those people. I had wanted to be; I had tried to wash Texas off my skin and it didn’t happen. So, I came back home and started learning about my home country.

Q: Why has the series endured for 68 books, in your opinion?

A: I think part of it is the fascination that people have always had with the American West and with Texas in particular. And also, dogs are universal commodities. People in Iran laugh at their dogs just the same as we do in Texas. The first 30 Hank books have been translated into Chinese, so the Chinese appreciate the culture that I’m talking about, which is a small subculture of ranching people in Texas.

Q: Does your family vacation in Texas and where do you like to go?

A: You know, my father and mother never took a vacation. We went to see our relatives in Lubbock and Seminole, and I’ve kind of followed the same pattern. We go visit our kinfolk in Amarillo and Dallas, and then I’m traveling so much for Hank programs.

A: I’ve got the next six books already written. I only allow myself to write two Hank books a year, because I don’t want to overgraze my pastures, you might say. And in between Hank books I’m getting ideas as I work on the ranch and watch my dogs and watch the buzzards and coyotes and the interaction of the animals on our ranch.

A: I won’t say no, but it seems unlikely. Beulah is a sensible lady. She likes what is likeable in Hank, but she recognizes that he’s a bit of a dingbat. He’s not reliable. Plato the bird dog is dull but steady.