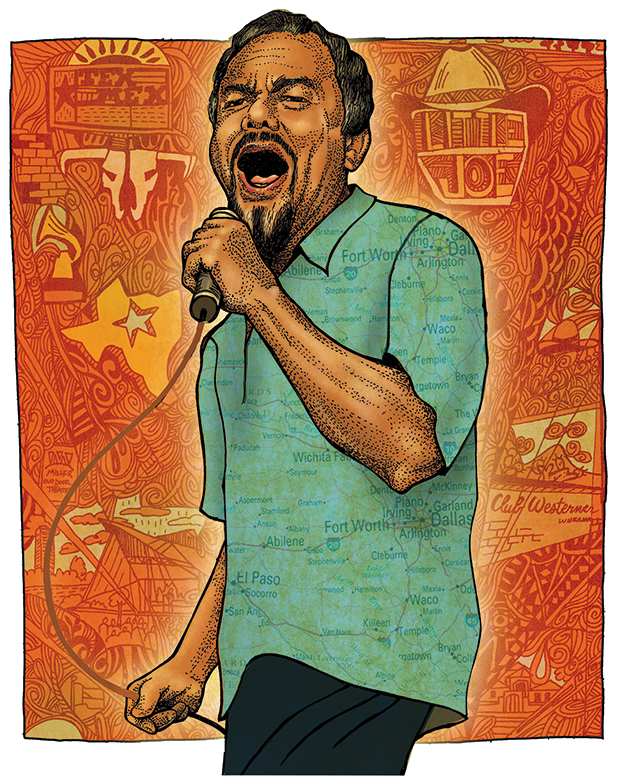 At age 76, “Little Joe” Hernández has spent more than half a century performing his personal brand of Tejano music on stages across the Lone Star State and well beyond. A lifetime resident of Temple, he grew up the seventh of 13 siblings in a family short on money but rich in music. He picked cotton and worked odd jobs before joining his cousin’s band as a guitarist at the tender age of 15. Several years later, in 1959, he took over the band, eventually changing the name to “Little Joe y la Familia” in 1970.

Hernández’s homegrown sound blends traditional Mexican Norteño, American country-western, and jazz—spiced with rock and Latin beats. The songs incorporate both English and Spanish lyrics and a variety of instruments ranging from horns and accordions to fiddles and pedal steel guitars. Hernández has released more than 50 albums, racking up Grammy Awards for Best Mexican-American Album for 16 de Septiembre (1991), and for Best Tejano Album for Chicanisimo (2005), Before the Next Teardrop Falls (2007), and Recuerdos (2010), as well as a Latin Grammy for Recuerdos.

Over the years, Little Joe has played alongside fellow Texas greats like Willie Nelson and Billy Gibbons of ZZ Top, and he continues to perform about 100 shows a year. He plays annually in October at Houston’s Miller Outdoor Theatre for the Festival Chicano (which he helped establish), and he’s a frequent performer at fundraising events for causes close to his heart, such as farmworker rights, education, and diabetes awareness. When he’s not on the road, Hernández can often be found at his office along Interstate 35 in Temple, where photographs and memorabilia on the walls document his eventful career. (A museum within the office is currently closed for renovation.)

Q. Why have you stayed in Temple all these years?

A. My music has taken me to every part of the world, but I always come back to Temple. I tried living in Los Angeles for about 10 months in 1974, but it didn’t work out. Family is my home, and my base of operations. My office is right along I-35 in a former bowling alley. On the walls are all the wonderful gifts that I’ve received over the years—awards, keys to the city, hundreds of items; and the Grammys, of course.

Q. How did growing up in Temple affect your sound?

A. I was raised in a black neighborhood, so my musical experience was what I heard there, in lounges and in my friends’ homes. I never heard black artists on the airwaves, but I heard country-western, which is part of my DNA. And at about 4:30 in the morning, when my dad got up early to go work on the railroad, the radio would play Mexican music. There was a lot of music in my childhood. My siblings and parents all had an appreciation for music and played records—jazz and crooners. If you can get the soul of jazz, then you can apply that to all genres, it doesn’t matter if it’s salsa or ranchero. Growing up, I was exposed to some really beautiful music, which I try to incorporate in my own repertoire. I mix the genres and styles.

Q. What are some of your favorite venues in Texas?

A. I still like to go to small-town dance halls like Club Westerner in Victoria. The population there is small, but the turnout is huge. In ’56 I played there for the first time. It was family-owned, and still is today, and it’s where all the great country artists performed, like Ray Price and Willie Nelson. There aren’t many dance halls left in Texas, but the music here is as diverse as the landscape. Those Czech polka bands in Central Texas, with that oom-pah beat, accordions, and fiddles—it’s amazing how close it is to the sounds of Norteño and conjunto. No matter who you are in Texas, music is a key part of our lifestyle.

Q. What do you appreciate about Texas when you are on the road on tour?

A. I love the desert of Big Bend and the hills, rivers, and lakes of the Hill Country, the rolling grasslands. East Texas is beautiful, and so is the Valley. I’ve crisscrossed the state from El Paso to Beaumont, and from McAllen to Amarillo. You know the old song “I’ve Been Everywhere?” Well, I’ve been everywhere. I’ve been on the road for over half a century. When I have time off, I enjoy staying home. I love all that about Texas, but certainly mostly the people, Texas people.

A. A documentary of my life [Recuerdos: The Life and Music of Little Joe] is underway, and I just wrote a new album of Spanish rock. The business of recording and promoting has changed so much with technology. In the past, I’d drive into any town, and walk into the radio stations with my record, and they’d play it on the air. Now it’s corporate. But all music evolves. I believe each generation brings its own musical ideas to the table.

Q. What’s the documentary about?

A. The documentary is really about a struggle, a cause, and about the people. It starts with the farmworkers, because I came from the fields myself. I joined the movement and met Cesar Chavez and became part of the struggle that unites all of us. It’s going to shine a light on a lot of things that Chicanos are not recognized for. Ultimately, I hope [the documentary] will bring encouragement to the next generation, that you can make it if you try, and that we as Americans have offered a lot to our country.

Q. How does your music help bring people together?

A. I keep an open mind to all music. For me, it’s like food—if you prepare it well, I’ll eat it. I hope my music, and all music, can be appreciated by everyone, and when you listen to it, you can forget about the things that bring you down. We should all appreciate the good things in life, like family and music.