How Growing Up in Paris, Texas Kindled the Creative Fire of Artist Trenton Doyle Hancock 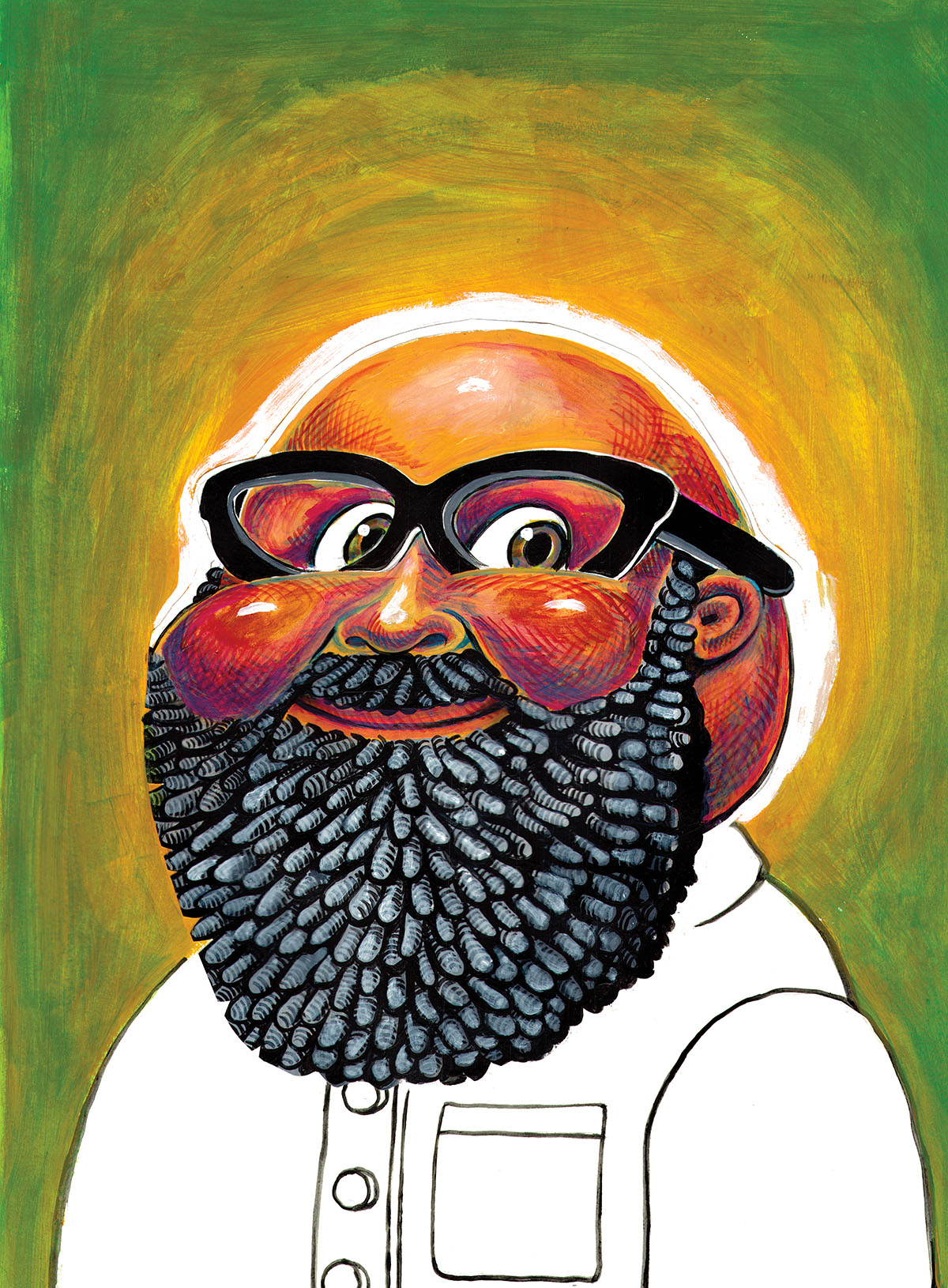 The mixed-media artist Trenton Doyle Hancock stands inside his cluttered warehouse studio, in the Acres Homes neighborhood of Houston. He is flipping through drawings of the graphic novel he began creating a couple of years ago while living in Berlin. It’s a customarily hot summer day, with no A/C, and beads of sweat form on his bespectacled face as he explains the storyline for Chapter 2: something totally outlandish and impossible to follow, yet deeply felt and mesmerizing to hear, about veganism as a form of religion.

The graphic novel is a deep-dive into Torpedo Boy, the Mounds, and other characters Hancock uses to play out morality tales in his artworks. In addition to drawing and painting, he’s dipped into opera (Cult of Color: Call to Color, a collaboration with Ballet Austin) and created his own toy line, Moundverse Infants. Hancock, 45, was born in Oklahoma City, but when he was less than a week old, his single mom moved them to her northeast Texas hometown of Paris, where he grew up in an evangelical Baptist family. Hancock says his art is a reaction to this religious influence, an ongoing narrative he describes as exploring themes of good versus evil.

In 2019, Hancock was awarded the Texas Medal of Arts. His pieces have been exhibited around the world, and last year he had his biggest show ever, a Willy Wonkian installation at the Massachusetts Museum of Contemporary Art. Hancock also has a piece at AT&T Stadium, home of the Dallas Cowboys. The site-specific mural, titled From a Legend to a Choir and measuring 110 feet long and four stories tall, is a pop art tableau densely packed with Hancock’s characters awash in a rainbow of color. As its description explains, the work “evokes the biblical Garden of Eden and the psychedelic Summer of Love.”

Q: What was it like growing up in East Texas?
A: I was a shy kid, but I found my confidence through art. From the time they gave me a pencil and paper, I was drawing. People always have called me an artist, even before I knew what that term meant. Art got me into a lot of trouble, but it got me out of a lot of trouble, too. Because once you do that party trick, people are like, oh my God, wow; I’m going to leave you alone. You’re to be protected. We’re not going to beat you up.

Q: How would you characterize Paris?
A: Most people know it because of the movie — Paris, Texas — but it’s nothing like that movie. That movie is made through the eyes of a German, Wim Wenders, who had this romantic myth of the West in his sights. He came over looking for this barren place with Sergio Leone music, perhaps, in the background. Paris is actually very lush and green.

Q: How is it socioeconomically?
A: I went to a school that was half-white, half-black. Paris is separated by a train track, and the more affluent people are on one side, the factory workers and mechanics are on the other side. And we were on the mechanics’ side of things. We were middle class. My stepdad never went to college but worked like six jobs. My mother did go to college. She was a teacher—taught for 40 years.

Q: What did you do besides making art?
A: It’s a rural town so I was outside a lot. You’re always looking for kids to play with—throw a ball or go adventuring in the woods, or do stuff like catch crawdads out of the holes in the ground or the muddy ditches. I was a very stereotypical kid with a stick going outside and using it as a sword. A lot of imagination there.

Q: How do you describe your art?
A: I’ve created a world that is very specific. It answers to itself, and it’s a history that builds on itself. It’s called The Moundverse. For the uninitiated, I say, imagine The Lord of the Rings meets Dr. Seuss.

Q: Are there any autobiographical elements?
A: I’d say it’s mostly autobiographical, with names changed to protect the innocent. It started with this character called Torpedo Boy that I made when I was 10 years old—just a schoolboy in Paris. Torpedo Boy is kind of a symbiote. His real name is Boo Earlinius. He’s a spirit that doesn’t really have a physical form. He has to attach himself to a mortal being. That character stuck with me up until now. At first, I thought he was the center of things, and now I realize it’s this other character called The Mound—this innocent creature that’s this mutant that lives in the forest. And Torpedo Boy, I figured out later on that he’s the protector of these creatures—the Mounds—because they can’t defend themselves, really. So, the powers that be in the heavens sent down Torpedo Boy to help out.

Q: How does this relate to your life?
A: I’m always thinking about how to protect my own innocence as an artist. You get corrupted by the rigors of grown-up life, and there are expectations that are placed on you. It’s easy to forget how to be creative, how to look at the world through new eyes. My work is sort of an essay on human behavior and the fact that there’s always potential for negative interaction and positive interaction, and there’s this whole spectrum in between. If you break it down in psychological terms, it deals with trying to create an alternate space for all of those things to play out, so that I can look at it and learn from my own work.

Q: How did religion inform you as you were growing up?
A: In the mid-’80s, my folks had such a flair, specifically my mom and grandmother, with the Christian stuff, that they burned all of our toys, like made us march them to a burning barrel behind the house and dump all the He-Man toys in there. They thought there were demons inside the toys. For them, it’s super real. All my cousins, they’ve started their own churches and ministries. In some ways, I was expected to go that direction. So, for me, what I do is going just as hard and just as fast and furious as they’re doing, but I’m creating my own version of Jesus and the saints—and value in life.

Q: What’s happening in your piece at Cowboys stadium?
A: You’re looking at a bunch of baby Mounds. One might have a kitchen sink for a head, another one has a football player’s head, and one has my head. I’m just going through plopping pop-culture references on all the heads of the Mounds. There might be a hundred of them in this piece, and they’re planted in a garden, so there are lots of colorful flowers. They’re all talking their first words, which are colors—so there are these bands of colors coming out of their mouths. It’s a really energetic piece. I don’t think it’s a work that people expect to see going to a football stadium, to go get their hot dog. They’re just like, whoa, what is that? People that normally wouldn’t go to museums see the art in that collection, and that’s what I’ve always wanted—the democracy of art.

Trenton Doyle Hancock is one of 25 artists featured at AT&T Stadium in Arlington with his mural From a Legend to a Choir. Hancock’s work is also in the permanent collections of the Dallas Museum of Art; The Museum of Fine Arts, Houston; and Modern Art Museum of Fort Worth.