The Dallas-born golf legend on the art of “moving dirt" 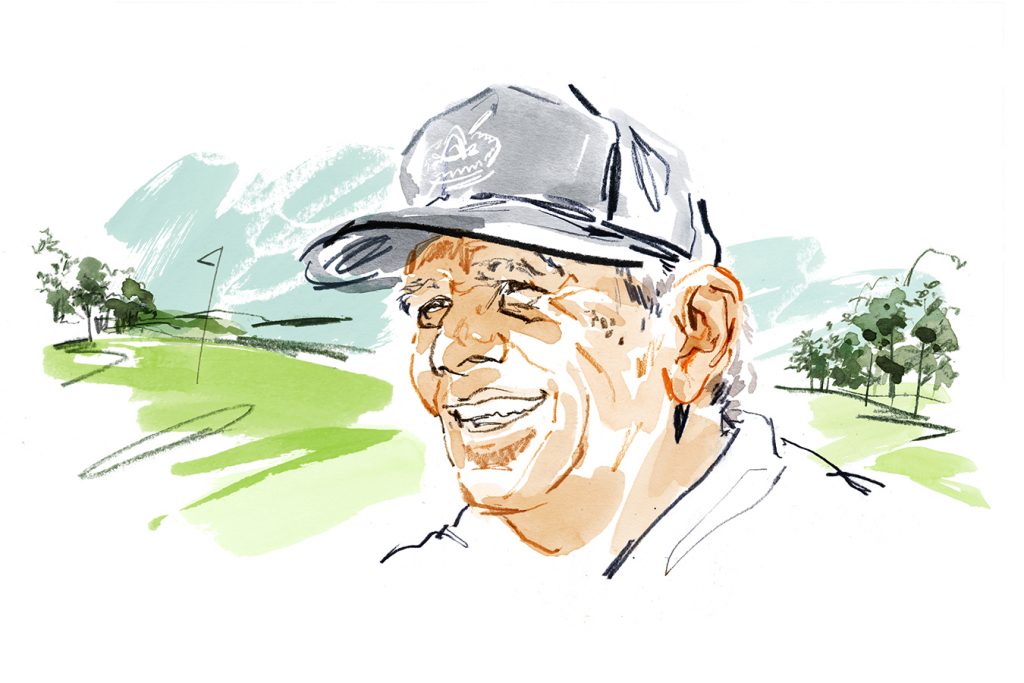 Most stories about Lee Trevino start the same way because the tale is so compelling: Raised in a Dallas shack without plumbing or electricity, he dropped out of school at 14 to work at a nearby golf course. He went from carrying clubs to wielding them as well as anyone ever had—and sometimes better. In 1968, he pulled off the unprecedented feat of shooting in the 60s in all four rounds of the U.S. Open; and in 1971, he became the first person to win the PGA Tour’s three oldest events—the U.S. Open, Canadian Open, and British Open—all in the same year. From 1968-84, Trevino won 29 PGA Tour events, including six majors. His final title, the 1984 PGA Championship, came three years after his induction into the World Golf Hall of Fame. Yet fans flocked to Trevino for more than his shot-making. With a quip for all occasions, he kept everyone laughing. And then there were the stunts. He won bets by using a Dr Pepper bottle as a golf club. One time, before an 18-hole playoff against Jack Nicklaus at the ’71 U.S. Open, Trevino plucked a rubber snake from his bag and tossed it at his opponent. These days, the 81-year-old lives in the upscale Preston Hollow neighborhood of Dallas with his wife, Claudia, and a spoiled French bulldog named Yoda. He lives simply, taking calls on a flip phone that requires him to step outside for decent reception. He still hits golf balls most days and, along with his son, Daniel, recently launched a line of gear with his “Super Mex” nickname and logo—a sombrero atop a golf club.

Q: Your golf education was quite different than kids’ today with their swing coaches, mental-skills coaches, and nutritionists. Have these tools made it easier to master the game?

A: You can have all the swing coaches and psychologists you want. They’re not the one staring at a downhill putt that’s breaking 8 feet to the left to win a golf tournament. You’re the one that’s doing that. People don’t realize how difficult it is to be a championship golfer. You have to be self-dedicated. That’s how I did it. I just outworked everybody. The only way you get confidence in playing golf is by moving dirt. The more dirt you move, the more confidence you get. What I mean by “moving dirt” is working on shots, manipulating the ball around trees, hitting little bump-and-runs, doing all these kinds of tricks with a golf ball for when you need that shot. People that don’t move dirt, they’re not successful at all.

Q: When did you start figuring out the game?

A: I got into a little trouble when I was 17, so I went into the Marine Corps. I was a machine gunner in the Pacific for four years. I played a little bit there. I actually won a tournament in Okinawa—the Chamber of Commerce in 1959. I still have that trophy; it’s a big silver bowl. When I got out, I came home to Dallas, and the Columbian Country Club had only nine holes and were building another nine. I got on the construction crew. I was weld-ing the pipes for the irrigation and build-ing the greens and the bunkers and doing whatever we had to do. I did that for a year, then I worked at a driving range and a par-3 course up on Lovers Lane and Greenville. I didn’t go to work until the afternoon, so every morning I went to Tenison Park and played 18 holes. I probably hit 1,000 balls a day, some during work when nobody was around. The first tournament I played as a pro was the 1965 Texas State Open at Sharpstown Golf Club in Houston. The University of Houston had a hell of a team at that time, and all those guys were playing in that tournament. I ended up winning in a playoff. So I came back the next year, and I won it again.

Q: Besides the silver bowl from Okinawa, what are your other favorite keepsakes?

A: You have to understand that when you never had anything as a kid—and you didn’t know anyone who had anything—you realize trophies are just material things. They don’t mean anything. I know I won those tournaments. That’s enough for me. All the plaques, pictures, and trophies are in an upstairs bedroom. When we redid this house, my wife built six notches into the wall around the fireplace. She was going to put the major trophies in there. She had the notches specially built at a certain height and everything. But we ended up putting religious stuff in there.

Q: Since accomplishments are what you take pride in, what do you consider your greatest feat?

A: My best year was 1971. I won six tournaments. I had that run of winning the U.S. Open in a playoff with Jack Nicklaus; then I went to Canada and won a play-off over Art Wall—on the first extra hole, I made about a 30-foot birdie putt. Then I jumped on a plane and went to Royal Birkdale in Southport, England, and beat Mr. Lu [Liang-Huan] on the 18th hole by one shot. So in a span of 30 days, I won three championships.

Q: Your heritage obviously led to the nickname “Super Mex,” but what’s the story behind it?

A: Bucky Woy was my first manager. In 1967, I’d just finished fifth at the U.S. Open, then we went to a tournament in Cleve-land. He was from Akron, Ohio, and naturally he wanted to promote me. So he got a bunch of high school kids to come hold up cardboard signs. They wrote on them, “Go get ’em, Super Mex.” So we copy-righted the name, and then we designed the logo. My son, Daniel, wanted to know if he could do something with it. I said sure. We recently came out with a hat and club head covers. At 81 years old, I’m starting a new thing.

Q: How have you kept busy during the pandemic?

A: I’m really lucky to have my wife, or I’d have been dead a long time ago. And I got a Frenchie bulldog that I walk every morning. She looks just like Yoda, so her name is Yoda. She gets up every morning at 7:30, and I already have her food ready. I actually boil 12 big long green beans, and I cut them up and put them on her food. That way she don’t gain weight. When she sees me putting my braces on my knees, she knows she’s going for a walk.

A: They got so many good golf courses in Texas that people don’t even know about. Whispering Pines [in East Texas near Trinity] is a hell of a golf course. I love Houston Champions. But you have to understand that I played for a living. I didn’t play for pleasure much. The weeks I was not playing, I was practicing. So I never did get to just test other golf courses. Like here, Dallas Country Club. I’ve lived in Dallas most of life and I’ve played it once. Northwood, I’ve played it maybe twice.

Q: What’s the secret behind Texas’ tradition of great golfers?