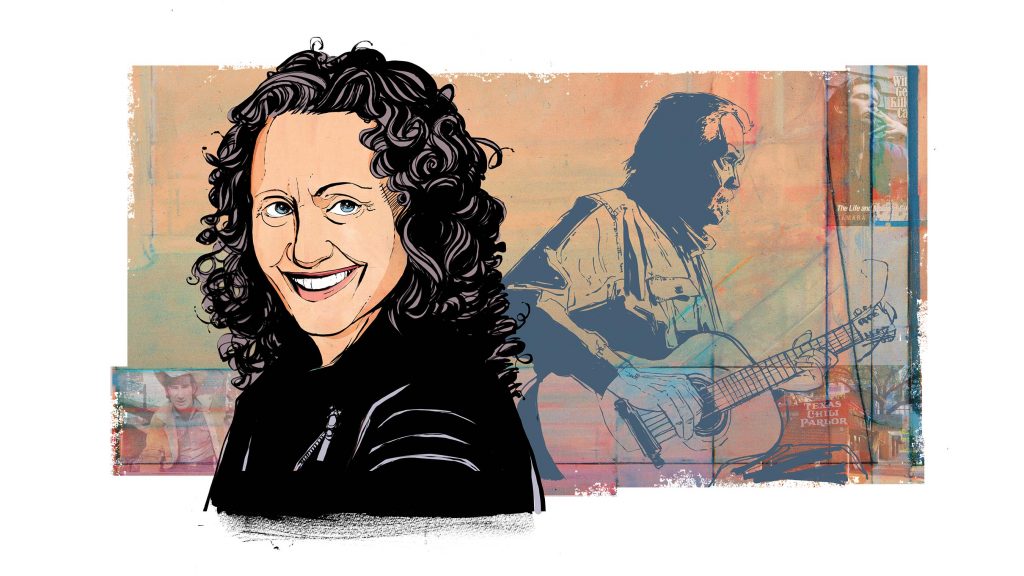 If you’re talking about Guy Clark, there’s no place better to do so than at the Texas Chili Parlor in Austin. And few living people are more versed on the subject at hand than Tamara Saviano. A veteran journalist and record producer, Saviano has spent more than a decade chronicling the life and music of the Texas troubadour. Starting as his publicist in the 2000s, Saviano co-produced a Grammy-winning 2011 tribute album, This One’s for Him, and wrote the 2016 Clark biography, Without Getting Killed or Caught. In March, Saviano and Paul Whitfield, her husband and co-producer, will debut a film of the same name at the South by Southwest Film Festival.

Clark was born in Monahans and grew up in Rockport before eventually moving to Nashville, where he passed away in 2016 at the age of 74. But his legend continues to grow in the works and stories of friends like Rodney Crowell, Steve Earle, and Lyle Lovett.

Friends and fans love to recall Clark’s wild misadventures with his songwriting compadre Townes Van Zandt. But Clark never fit into Music City’s template for a country star, and that’s where Saviano came in. Crowell sees her as one of Nashville’s greatest publicists. “She really did get inside Guy’s world and bring him to the fore,” Crowell has said. “I mean, she gets a lifetime pass for that alone.” Clark’s legacy bears that out: Though he never had a smash hit under his own name, his songs like “Desperados Waiting for a Train” and “L.A. Freeway” have become ensconced in Texas music and in the larger genre of Americana. The Texas Chili Parlor looms large in Clark’s iconic lament, “Dublin Blues.” And it’s where Saviano, who splits her time between Austin and Nashville, first hatched the idea for a Clark biography. When the documentary project followed, Clark consented—on the condition that Saviano be at the helm.

Q: It’s easy to see how the Texas Chili Parlor would appeal to Guy.

A: Absolutely. Because of “Dublin Blues,” tourists come to Austin, and this is part of their tour. But when you’re in here, it feels like a Guy place. It doesn’t feel like a tourist trap.

TH: Would you call Without Getting Killed or Caught a documentary?

A: It certainly has that. We discuss Guy’s career—that’s the basis. But it’s also this interesting relationship story. There were always three people in that marriage. First it was Guy, Susanna [Clark, Guy’s wife], and Bunny [Susanna’s sister, whom Clark dated prior to her suicide and before his marriage to Susanna]. And then it was Guy, Susanna, and Townes Van Zandt. Not only that but the friendship relationships: Rodney Crowell moved to Nashville in 1972, and Steve Earle moved in ’74, and they were with that group. We get into how that close friendship influenced all of their art. It was really a magical time. It’s also a little on the dark side, but it is what it is.

Q: Would Guy have wanted y’all to shy away from that?

A: No, he would not. I feel quite confident that Guy would have liked our movie. There were a few instances where we got feedback from some filmmakers, and they were like, “Oh, do you want to soften that?” Nope. Guy would not want me to soften anything.

Q: How would you describe the relationship between Guy, Susanna, and Townes?

A: Susanna wrote a poem that we have in the film: “One is her soul, and the other her heart.” Their art is what drove the three of them. Townes was the yardstick for Guy. Guy felt like Townes made him a better writer. Susanna loved Townes, and Guy was very stoic, very West Texas, logical, no-nonsense. And Townes and Susanna had this very mystical thing. Townes gave her things that Guy never could have given her. Steve Earle and Rodney Crowell talk about that in the film. Steve also says that Susanna was a handful for any one man, so Guy gave her room to take up those relationships to take up some of the slack. And I think that’s really true. But they loved each other. Guy loved Susanna; Guy loved Townes; Townes loved them both; Susanna loved them both.

Q: Sissy Spacek narrates the film. How did she get involved?

A: I found out that Sissy grew up in Quitman, 100 miles from Atlanta, Texas, where Susanna grew up, and that Sissy recorded an album [Hangin’ Up My Heart], and Rodney Crowell produced it. I talked to Rodney, and he said, “Not only did I produce that album, but I put a Susanna Clark song on that album.” I’m like—are you kidding me?

Q: You grew up in Wisconsin, and that was where you first heard Guy’s music when you were 14. Was Guy your gateway to Texas?

A: Yes, definitely. Well, between Guy and Kris Kristofferson, who I’ve known for a really long time.

Q: The premiere of Without Getting Killed or Caught during last year’s South by Southwest Film Festival was postponed due to COVID-19. What are the challenges of releasing a movie during a pandemic?

A: Between the coronavirus, the election, and all the unknowns about what is happening in the film business, we decided to just sit on the film for 2020.

Q: Do you think there could ultimately be some benefit from waiting?

A: If we had rolled it out at SXSW last year as planned, I would not have been as prepared and may have made some costly mistakes. My goal for this film is two-fold: to get it out to Guy Clark fans and to recoup my investors’ money. We have decided to cut out the middle man and distribute directly to fans for the first year. We are still reviewing platforms to decide the best course of action, but there are many options.

We plan to do ticketed virtual screen-ing events with Q&As and then make the film available on demand. If all goes well with the COVID vaccine and people are going out, we can also start doing theater events in the fall of 2021.

Q: Outside of Austin, what are some of your favorite places in Texas?

A: Rockport is like my spiritual home now. I felt that from the first moment I was there. And I’m not sure that has anything to do with Guy. There’s some-thing about Rockport that I just fell in love with immediately. I go there, and I just feel this sense of peace. Monahans? I can understand why Guy’s parents wanted to leave. I love, love, love the Hill Country. I love Luckenbach.

Q: How is Guy connected to Luckenbach’s musical lore?

A: He is responsible in a big way because the night before Guy and Susanna flew down to Texas to go to Luckenbach, where Jerry Jeff Walker was recording Viva Terlingua, he was with Chips Moman. Guy had grown up knowing Hondo Crouch in Rockport, and so he was telling Chips all about Luckenbach, and saying, “Let’s go to Luckenbach!” So the next day, Guy and Susanna did go to Luckenbach, and Chips got together with [songwriter] Bobby [Emmons], and they wrote “Luckenbach, Texas (Back to the Basics of Love).” Guy really never got over it because of course that song sold millions. He said to me, “I can’t believe I gave away that song!”

“Without Getting Killed or Caught” premieres in March as part of the SXSW Film Festival, which is being held online. The movie will be released on streaming platforms starting this spring. withoutgettingkilledorcaught.com