ZZ Top’s Billy Gibbons on the blues, Tex-Mex, and BBQ 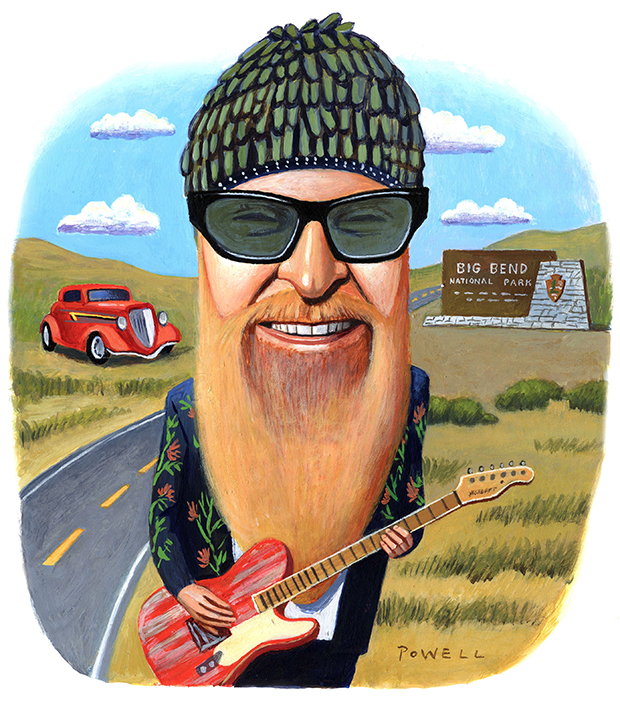 You’d be hard-pressed to name a band that defines Texas rock ’n’ roll any better than ZZ Top. Over nearly 50 years, the Houston-born trio has cultivated a mythical swagger marked by versatility, irreverence, and a relentless pursuit of larger-than-life guitar riffs and good times.

Born and raised in a musical family in Houston, Gibbons got an early introduction to rhythm and blues from a babysitter who took him along to clubs in the Fourth Ward. He started playing guitar at 14 and cut his teeth in garage bands and the psychedelic Moving Sidewalks before recruiting drummer Frank Beard and bassist Dusty Hill—both from the Dallas area—in pursuit of a blues-based power trio.

ZZ Top played its first gig at the Beaumont Knights of Columbus Hall on Feb. 10, 1970—and never looked back. Millions of album sales and thousands of worldwide concerts later, the Rock and Roll Hall of Famers still tour Texas nearly every year. Earlier this summer, Gibbons took time for a tour-bus email exchange en route to a concert in Amarillo.

Q: What are your family’s Texas roots?

A: Irish mom and English dad engaged with the presence of mind to make Texas a deep-seated home.

Q: Where do you live now?

A: We are asked often and prefer to humorously offer our collective ZZ Top reply, “We reside on the tour bus—it just keeps changing towns!” Anywhere from Texas to California to Las Vegas and all-points-in-between.

Q: How much of the year do you spend touring?

A: The recent touring seasons have allowed us to travel for about 300 days a year. Texas appearances are always a seasonal priority.

Q: How does your work break down between ZZ Top and other projects?

A: The interesting escapades outside ZZ Top have enjoyed a variety of settings. Everything from participating with many admired fellow recording artists from Queens of the Stone Age to Willie Nelson, Keith Richards, and the great Chris Stapleton, as well as working with our exotic aggregation known as The Jungle Show. It’s a demanding getaway, yet it’s a constant groove.

Q: And you had a TV acting stint…

A: Our extended stay onboard the Fox television series Bones went from a simple one-time appearance into a 12-year run. Quite a hilarious bonding with some truly fascinating characters. Quite the enjoyable outing to say the least.

A: Wherever we may be in the Great State, we always say, “When in Texas, it’s the bestest!” Not to mention that each and every stop presents the allure of Tex-Mex cuisine to enhance the sonic experience from border to border. Always a treat.

A: Make no mistake, Tex-Mex cuisine remains at the top of our always-growing list of fave-rave destinations. In Austin, for instance, there’s La Condesa Modern Mexican and a couple of other favorites, Matt’s El Rancho, and you can’t beat Cisco’s for a casual Tex-Mex Sunday brunch. Let’s not forget San Antonio with Acenar’s south-of-the-border specialties and, of course, for 24-hour convenience, Mi Tierra remains a city cornerstone. Houston boasts the delights at Cyclone Anaya’s. Tila’s real Mexican dishes are splendid, as are the recipes prepared at Molina’s and Armandos. The Velvet Taco in Dallas is a definite late-night destination. And when passing through El Paso, be sure to stop at the H&H Car Wash for a clean machine and a handful of their fine handmade tacos. Cafe Central next to El Paso’s famed Pioneer Plaza has the best toreados anywhere.

The Texas Barbecue Trail runs side-by-side, too. Franklin’s in Austin requires an early-bird arrival. Black’s and Smitty’s in Lockhart are epic. From the southernmost border tip of the “T” to all other locales, there’s something for everyone.

A: The desert Southwest portion of the state rides high on our list. Big Bend is a fascinating zone that continually presents a changing visual experience each and every visit. Liz Lambert’s El Cosmico resort in Marfa is another bonus. San Antonio’s Hotel Valencia at the River Walk provides tantalizing treats for tourists. Don’t leave out the lengthy stretches of beachfront beauty. Surf’s up!

A: Texas music is lively and likable with a range of sonic expressions that know no bounds. Play them blues and play ’em L-O-U-D…!

A: Well, it’s more than fair to say my partners Dusty Hill and Frank Beard top the list. We, as a band, seem to fall toward delivering interpretations of that great American art form “The Blues.” And without question, the wave of originators of those expressions is many. Jimmy Reed, Howlin’ Wolf, Muddy Waters, and the endless list of that exquisite long line of expressionists from the ’50s and ’60s.

We hold in high esteem another gangly group of greats such as T-Bone Walker, Roky Erickson, Albert Collins, Doug Sahm, Augie Meyers, and, of course, Lightnin’ Hopkins. And that long list of artists appearing on the great recording label from Houston, Duke Records, remains a highlight of entertainment as well.

Q: How do you explain ZZ Top’s enduring appeal?

A: We always express our enjoyment of getting to do what we get to do. We keep on keepin’ on…

Q: What’s your take on the current popularity of beards?

A: Well, it’s one of those unexpected fashion statements that comes around every now and again. Take along the styling gel!

Q: Biggest changes you’ve seen in Texas during your time?

A: The skylines continue to abound in ways that say bigger and better in the Lone Star State. Then again, the sheer enormity of the boundaries defies attempts to take it all in at once. As soon as one avenue is covered, a completely different vista appears around the next turn. That’s BIG!

Q: What projects do you have coming up?

A: Another ZZ Top release is in the works as we make way toward celebrating a 50-year anniversary. And “playin’ them blues” remains a fixture of unchanging admiration. Rock on!