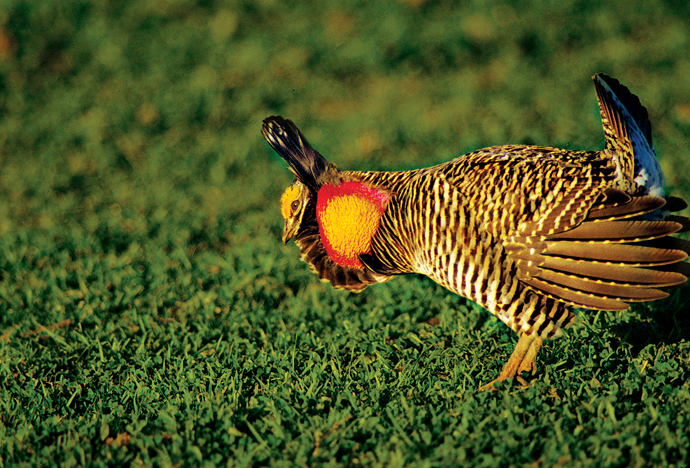 Fewer than 100 Attwater’s prairie-chickens exist in the wild, but captive breeding programs offer hope for the species’ survival. (Photo by Kathy Adams Clark)

An hour’s drive due west of downtown Houston, on Interstate 10, the suburbs finally begin to give way to open space. At the Sealy exit, I turn off onto Texas 36, then onto Farm Road 3013, where tractors slow traffic to a country pace. I take a deep breath of rural air and wonder what it must have been like more than a century ago when all this land was still wild coastal prairie. Before the cows, before the plows, before the fields of cotton and corn, this flat land of switchgrass, yellow Indian grass, little bluestem, and big bluestem laced with streams, marshes, and ponds was the domain of Attwater’s prairie-chickens. From the Louisiana coast to west of Corpus Christi, up to a million of these birds, a subspecies of the extinct heath hen, once thrived on a diet of insects and seeds, brooded in shallow ground nests—and filled the vast prairie with loud booming.

Well, I had done a little research before setting out, asking Houston Zoo birdkeeper Mollie Coym to explain this peculiar trait. “During mating season, from late January to April, males hold their head and tail feathers up, inflate the air sacs on the sides of their necks, and stomp their feet really fast,” she says. “It’s a mating dance to attract a female. And the sound—kind of like blowing across the top of a Coke bottle—goes on for hours, all of them booming at the same time. The females can be very standoffish, but once they choose a mate the sound gets even louder.”

I try to imagine the chorus of a million “booming” chickens as I arrive at my destination, the Attwater Prairie Chicken National Wildlife Refuge, near Eagle Lake. The refuge, which spreads across more than 10,000 acres of coastal prairie habitat, is home to more than 400 species of animals, including the largest extant wild Attwater’s population—today a mere 50 individuals. (Some 40 other birds live wild at the Texas City Prairie Preserve and on private property near Goliad.) The Attwater’s prairie-chicken (APC) is one of Texas’ most endangered birds.

I ask refuge manager Terry Rossignol what happened. “We’ve lost 99 percent of the original coastal prairie due to conversion to cropland, urbanization, and invasive plant species,” he says. “That’s the primary reason for the birds’ decline. Predation—mostly by owls, hawks, and skunks —also affects populations, but red imported fire ants are probably the biggest threat.”

Rossignol, APC Recovery Team Leader since 1996, sets protocol under U.S. Fish & Wildlife Service guidelines, coordinating captive breeding programs at the Houston Zoo, the Abilene Zoo, the Caldwell Zoo in Tyler, the San Antonio Zoo, SeaWorld San An–tonio, Fossil Rim Wildlife Center in Glen Rose, and Texas A&M University. The refuge also works to heighten public awareness of the birds, hosting guided van tours and hikes as part of its annual Attwater’s Prairie Chicken Festival in April. And visitors can look for birds year round on two hiking trails and a five-mile driving loop. “It has been gratifying to see the Att-water’s population slowly increase,” he says.

I am itching to be outside; if it’s my lucky day, maybe I will spot one of these rare birds. But first I linger in the refuge visitor center to watch videos of the courtship ritual and of chicks hatching. In the wild, hens incubate eggs for 26 days and then keep the chicks close and warm for up to six weeks, until they are old enough to fend for themselves. Now, most chicks are hatched in captivity, nurtured into early adulthood, and then released.

The first successful captive breeding in Texas took place in the early 1990s at Fossil Rim Wildlife Center. Janet Johnson, Fossil Rim’s avian supervisor, tells me, “We released 104 chicks to the wild last year, and we have 23 breeding pairs in residence this year. Our education staff leads behind-the-scenes tours of the chick-rearing facility, where guests can see the avian staff working with the chicks. These birds are so endearing, and we really want them to make it.”

At the Houston Zoo, I accompany bird curator Hannah Bailey for a behind-the-scenes prairie-chicken tour. “As soon as the eggs are laid, we collect them for incubation,” says Bailey. “Incubation is part science, part art. We candle the eggs [examine them in front of a light] several times to be sure they are staying healthy. When they hatch, the chicks go into brooder boxes, which simulate being under the mother. As they grow, they are moved to larger cages, until they’re ready to be released to one of the three ‘wild’ locations in Texas. With a 20 percent survival rate year-to-year, we blow other [species] release programs out of the water.”

The Attwater’s prairie-chickens—and their fragile hold on existence—engender the affection of many, from schoolchildren who “adopt” birds with their ice-cream money to private landowners who clear out invasive plant species to create more native habitat. To astronauts.

Space, which can be scarce on Earth, is crucial to the birds’ survival. Ideally, they need a large unobstructed area to flush (take flight suddenly) without hurting themselves. This explains why zoos can have a hard time keeping them on public exhibit, and why the Houston Zoo keeps its breeding colony on part of a 200-acre patch of prairie at NASA’s Johnson Space Center campus, where I join a public tour.  NASA environmental specialist Sandra Parker leads the way to two rows of soft-meshed 20’x40’ pens, home to 23 birds, and explains: “A mission of JSC is protection of the home planet. The zoo needed appropriate space for their breeding colony, and we were able to help.” Parker tells me that astronaut Steve Frick visited during booming season and said how cool it was that they take care of the birds. “Of course,” she says, “he goes into space, and we think that’s pretty cool, too.”

Close up, I can see the herringbone feather pattern that provides camouflage. We watch them quietly peck in the sand and rest under clumps of grass as Parker explains the phenomenon of chicken “Boomtown!’ Suddenly, right on cue, a yellowish bulge the size of a small orange appears on the neck of a male, and he stomps around, his air sacs making an ethereal sound as they deflate.

As I walk the  Pipit and Sycamore trails that day at the national wildlife refuge, I see (and smell) loop cross both prairie and wetlands habitats. charred remains of prescribed burns, which help renew the habitat and remove nonnative species. I give wide berth to the cattle, whose grazing helps create pathways for chicks. I drive slowly, trying not to startle snowy egrets and white-faced ibis wading in Pintail Marsh. Then without warning, a force stronger than the breeze rustles tall roadside grasses … and, in seconds, not one but three Attwater’s prairie-chickens emerge, flush, and vanish.

Turns out, it is my lucky day. And I depart, hoping to leave behind a little luck for these precious few prairie-chickens.