The National Videogame Museum in Frisco 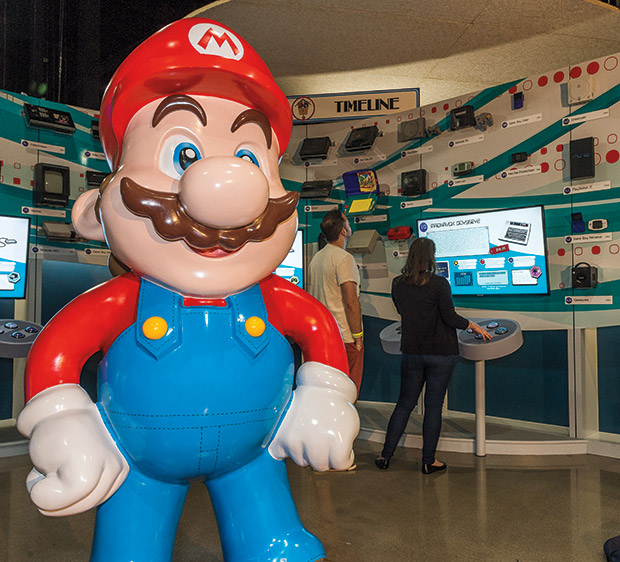 The video game character Mario welcomes guests to the museum in front of the exhibit Timeline of Consoles.

Once a rural suburb 30 miles north of Dallas, Frisco is now a burgeoning mini-city of its own. As the home of the Double-A Frisco Roughriders baseball team, FC Dallas of Major League Soccer, the NBA D-League Texas Legends, and the Dallas Cowboys’ new headquarters and practice facility, Frisco always has a game going on, it seems.

Perhaps it’s no surprise, then, that Frisco is also home to a new destination dedicated to another favorite competitive pastime—video games. Nestled within the Frisco Discovery Center, a complex of arts, science, and cultural exhibits, the National Videogame Museum opened in April to the delight of gamers everywhere. Whether you were a Pac-Man expert in the ’70s, a Nintendo kid in the ’80s, or a PlayStation addict in the aughts, the museum’s tribute to all things gaming is sure to delight the button-mashing kid inside.

A statue of an exploding game cartridge greets visitors entering the 10,000-square-foot museum. Covered in TV screens, consoles, and game boxes, the structure provides a taste of what’s to come in the museum’s exhibits, including more than 100,000 artifacts that chronicle gaming’s fascinating and sometimes rocky history.

Inside, the museum is broken up into a series of exhibits called “stages,” each of which represents a different aspect of video-game history. Everything in the museum is meant to be touched. Stage 1 presents guests with an oversized, 15-foot-tall Pong machine, one of the first video-game systems playable at home. As I played Pong with an Australian tourist, using paddles the size of steering wheels, I was transported back to when gaming was simpler—yet just as competitive.

Once I tore myself away from Pong’s monochromatic screen, the museum gleamed with color and sound. A life-size Mario statue provides a prime photo opportunity, and vibrant murals of video-game characters line the walls. From handpainted depictions of Frogger leaping out of trouble to Doom’s monsters and the Call of Duty soldier preparing to fight terrorists, every inch of the space screams gaming culture.

Even the museum itself is a game. Throughout the exhibits, the museum designers have hidden visual secrets, known as “Easter eggs”—the term for hidden features in a game. They could be out-of-place characters in a painting or a word purposefully misspelled in an exhibit description. You can look up clues and post your scores on the museum’s phone app, or play the game on a museum arcade cabinet.

And if none of this sounds familiar to you, don’t worry. In the Timeline of Consoles exhibit, the museum chronicles gaming history on three massive televisions controlled by giant Super Nintendo controllers. Elsewhere, the museum explores topics like the origins of video-game music; ultra-rare collectibles, including a Barbie-themed Game Boy (there are only two in existence); and early online gaming with an exhibit that shows a piece of data crawling along a dial-up internet connection.

One of the museum’s most thought-provoking stages is titled The Crash, represented by a life-size replica of a 1983 game store in the final stages of closing for good. A $50 game is marked down to $5, and a sign reads “Everything Must Go.” The exhibit harkens to a time in the early 1980s when anybody with a computer could make a game for the Atari 2600, the most popular home system at the time. With no quality control or oversight, the market was flooded with bad games. Consumers didn’t know the good titles from the bad, lost interest, and the industry crashed in 1983. If it weren’t for the surprise success of the Nintendo Entertainment System in 1986 and its now-famous Mario character, video games could have been a historical footnote.

The National Videogame Museum is built mostly upon the collections of museum founders and curators John Hardie, Sean Kelly, and Joe Santulli, longtime friends from the East Coast who began collecting games 25 years ago. The trio collectively owns enough memorabilia to fill a space five times the size of the museum. They started exhibiting their collection at gaming conventions more than 15 years ago, all the while dreaming of starting a brick-and-mortar museum. Their goal is to preserve video-game history, while also bringing together generations of gamers.

“It’s fun when parents come in with their kids,” Joe says. “It helps join the two generations. When a dad and his kids are on the couch and they’re playing BurgerTime [a 1982 game in which players steer a chef through a maze of hamburger ingredients while avoiding killer condiments], the kids may struggle with it a bit, but when it begins to click, it’s a pretty cool thing to watch.”

It’s a scene that plays out repeatedly as grown-ups dive back into their childhoods in the retro exhibits, including a 1980s-themed bedroom—complete with Ferris Bueller’s Day Off posters, Pac-Man bed sheets, and a chance to play Duck Hunt on a 19-inch Zenith television from the era. While the dads may hold the upper hand in games like Streets of Rage 2, the tables turn when the intergenerational gamers pick up Street Fighter 2.

One of the museum’s most popular features is the Pixel Dreams arcade, a cacophony of bloops, beeps, and excitement. The arcade is packed with nearly 40 coin-operated machines, ranging from Centipede from 1980 to 1993’s controversial Mortal Kombat 2.

Fully interactive and endlessly nostalgic, the National Videogame Museum is a one-of-a-kind shrine: a testament to the magic and charm of gaming’s yesteryear. Bring quarters, your thumbs, and a renewed sense of childlike discovery.