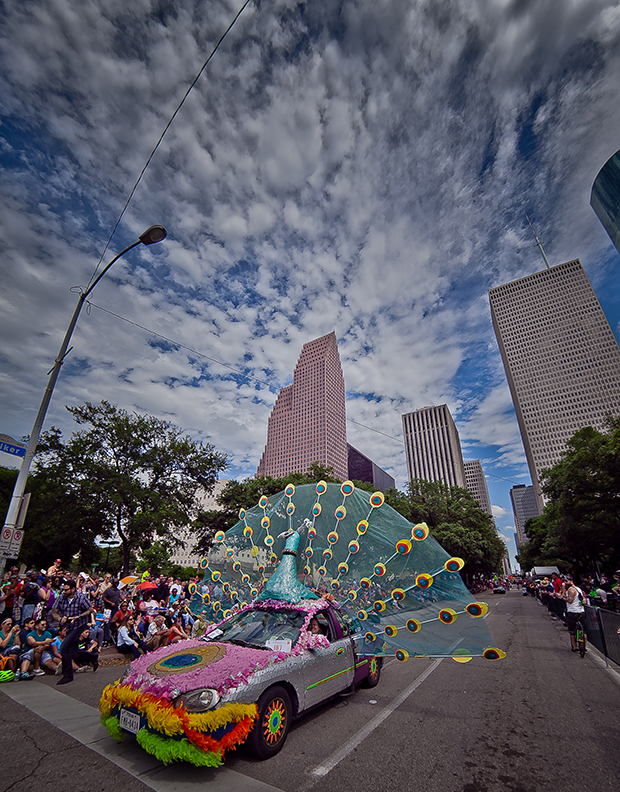 Long gone are the days where art could be seen only in formal museums. Now it comes parading through downtown streets, perched on wheels, carried by its very own engines, mixing the unexpected, and bringing distinctly different groups of people together with amazing results. The Houston Art Car Parade will celebrate its 30th anniversary on Saturday, April 8th, when 250 wheeled vehicles from across the United States, Canada and Mexico, transport art to an estimated 300,000 spectators.

Houston’s Art Car Parade begins at 2 p.m. on Saturday, April 8, at the corner of Smith and Pease Streets downtown. It travels north on Smith Street, turning left onto Walker Street at City Hall. Then it turns left onto Bagby Street and a right onto Lamar Street, coming to an end at Sabine Street. Parade goers can meet the artists beforehand at the Starting Line Party which begins at 11 a.m. You’ll definitely want to arrive early to save your spot to see this free and very popular event, or you can buy a ticket to the VIPit Experience for $150 to have reserved bleacher seating as well as food and drink.

The Art Cars can be seen around town all weekend. More than 100 cars, including the Noble Energy art car, will be at the Sneak Peek at Discovery Green on the Avenida on Thursday, April 6th, from 6 to 10 p.m. Well-known New Orleans jazz trumpeter Kermit Ruffins will be playing at this “evening block party,” and films featuring art cars from all over the country will be showing on the lawn.

The Legendary Art Car Ball is an opportunity to see some of the cars while eating, drinking, listening to live music, and even seeing some performance art. Partygoers are encouraged to wear outlandish costumes when they gather for the party at City Hall’s Hermann Square at 7 p.m. on Friday, April 7. Tickets for this event are $30 in advance and $35 at the door and can be purchased online.

A last chance to meet the artists who made these amazing cars is at noon on Sunday, April 9, at the Houston Art Car Parade Awards Ceremony at Smither Park, 2441 Munger Street. This free event will feature more than $10,000 in prize money being given to the winners of 13 categories, including ones for originality and most impressive transformation of a car into art.

Still want more? The Art Car Museum displays a few cars along with other eclectic works of art at 140 Heights Boulevard. Admission is free, and the museum is open Wednesday through Sunday, 11 a.m. to 6 p.m.

The world’s largest event of its kind, the parade showcases “art that’s not on a gallery wall,” says the parade’s Director of Communication, Jonathan Beitler, who notes the event is designed to be an opportunity for everyone “to get excited about art.” The parade is not curated; anyone who wants to make an art car is welcome to join (with a few guidelines to prevent sexually explicit or overly polarizing displays), and the parade has no rules about what constitutes art. “This art is about freedom and expressing freedom in a creative way,” Beitler says.

As a result, just about anything can be seen in the eclectic parade, from cars shooting fire to cars that look like a rooster. This year, Texas Southern University’s marching band, the Ocean of Soul, will dance its way along the route, while presiding over the parade will be actor and comedian Cheech Marin, the Grand Marshall. Lowriders and SLAB cars, two of Houston’s native car cultures which flash bright colors, spokes sticking out of their rims, and giant television sound systems, will all intermix with entries such as the Houston Grand Opera’s offering.

For Megan Freemantle, the designer of the opera’s car Brunnehilda, the mixing of this classical, dignified form of music with whimsical art cars is not surprising at all. It is a natural fit, she says, calling the parade “an operatic scale event.” It is “one of the biggest public laughter makers; it brings joy,” she says, and “a good opera will take you through every emotion, too.”

The car Brunnehilda represents opera’s iconic fat lady with mouth wide open in song. As a 12-foot-tall head, she is one of the largest entries. Volunteers from ages 4 to 87 spent 750 weekend hours creating her. Foam swim noodles form the base for her lips, and melted opera albums rim her helmet. At one point in her life, her braids became so big, they had to shrink her hair. She has even needed a face lift, but that’s to be expected. After all, it is her 13th appearance in the show. It also is her last. Just as the opera that she hails from, Wagner’s Ring cycle, the Brunnehilda car will end with everything being destroyed except for one seed remaining to carry on. The car is being retired from the ride but sold to the Orange Show, the organizers of the parade. 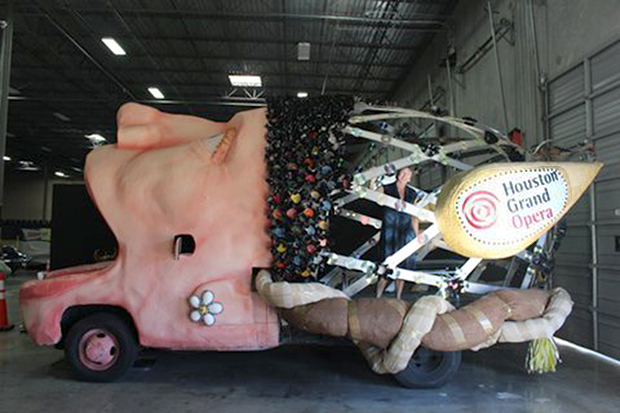 Brunnehilda will take her last run with singer Liam Bonner belting out arias from the back of her helmet, offering another unique experience for spectators. Normally, an audience is separated from the singer by an orchestra, setting them far apart, but here “the audience is in your lap,” Freemantle says.

Carrying on the mix of high art and silly cars are the professional artists who participate, using their talent and knowledge to reimagine how a car can look. A group of nine artists, who live adjoining each other in a community called Itchy Acres, will combine their efforts to create one special car for the parade’s anniversary. Well-known local sculptor Carter Ernst says the car will sport leaves and poison ivy as a base topped with contributions from each of the resident artists, including sculptures of herons, pieces of the Berlin wall, a whale and an asteroid shooting along the antennae. All of that will be affixed to her Honda Element. Ernst has created art cars since the very first parade in 1988, and says it is a wonderful way for people to see that artists are regular people. When you ride in the parade, she says, “people aren’t afraid of you. You make strange things that may seem odd to them, but then they get to see you. It’s a wonderful way to connect to people.”

Julian Luna, a sculptor and furniture maker, also sees the cars as a way to bring people together. This year, he designed the Noble Energy art car which was created with the help of students at the Energy Institute High School and was showcased at this year’s Super Bowl Live party.

In a high school, he says, “you have band people and sports people, but with an art car, you have everyone.” These cars attract students from every clique and give them the chance to discover untapped parts of themselves. The Noble Energy car, a Ford F-150 covered in plexiglass blocks that light up in vibrant, rotating colors, allowed science-minded students to create art. Luna says, “I had students tell me, ‘I’m not very artistic, but I can solder. I took a robotics class, so I can do that.’ All the kids know how to do something different, and this car brought them together.”

Luna made his first art car when he was a high school student himself and has seen many ways art cars brighten lives. “You can see people in their normal routine, and they see you out of the corner of their eye, and their face changes. Everything changes.” In fact, while driving an art car to the parade’s starting line one year, he passed two guys fighting in the street who actually stopped punching each other and broke apart to watch him pass.

Nicole Strine, who has been involved in the parade for 27 years and currently reigns as president of the Houston Art Car Klub (HACK), agrees that these cars have an incredible ability to bring starkly different people together. This point really struck her at one parade when she saw “a guy in his 80s, who glues buttons on everything he owns, talking to a punk rocker guy.” The creators of art cars are a random and varied group too, Strine says, but they all share a “free, throw-caution-to-the-wind attitude that you get from people gluing stuff to a car.” 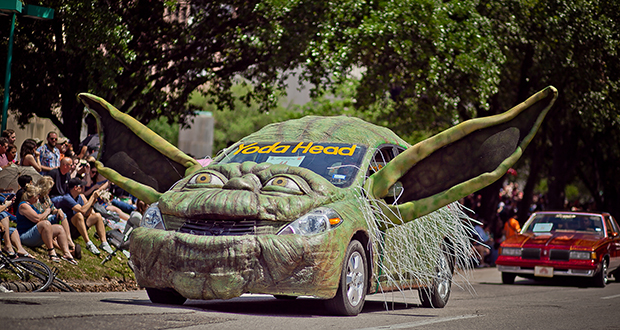 Strine’s car, Shattered Vanity, will be making its 10th appearance in the parade this year. It is a 1997 Honda Accord that has been completely covered in mirrored tiles. “I’m not into looking into mirrors. I’m interested in what they reflect,” she says, noting that her next plan is to cover her own house in mirrors.

For her, making art cars also brings much needed balance to life. She is an MRI technologist and sees heart-wrenching news frequently. She speaks about “seeing death, seeing a five-year-old’s brain tumor, being the first to see it. Seeing things like that makes you search for something as a release. Art cars are that for me. Gluing glass on a car is great therapy. You are alone doing this on a stool in your garage, and you’re engulfed in making art that you get to share with everyone, and maybe it will take someone else’s mind off something in their life.” That is what Houston’s Art Car Parade seems to be all about, showing people art they might not otherwise see so that they can experience its joy for themselves.