Songs in the Key of T

The Texas Musicians Museum in Irving 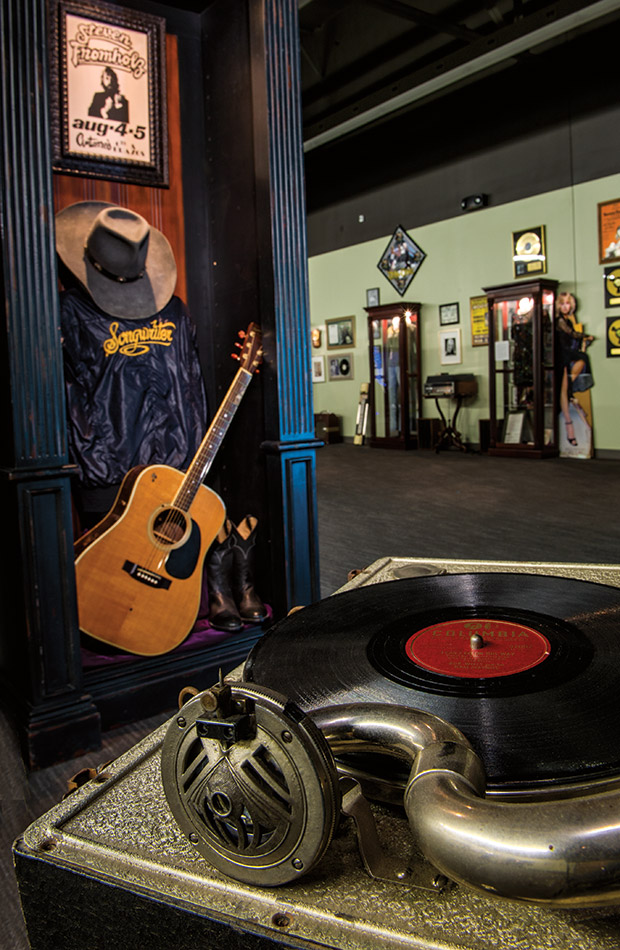 A guitar-brandishing fiberglass jalapeño beckons from the sidewalk in downtown Irving. Walk a few paces more and you’ll find a keyboard painted on the walkway, and beyond that, a glass door etched with the names of famous songs, from “Tumblin’ Tumbleweed” to “Wooly Bully” and “I Want to Take You Higher.”

Buddy and The Big Bopper

In January and the first half of February, the Texas Musicians Museum presents an exhibit about “The Day the Music Died” with displays on Buddy Holly and J.P. “The Big Bopper” Richardson, including the casket used for Richardson’s original interment.

Enter through that door into a former Toyota dealership, and you’ll discover that the story of Texas music has made its home right here in Irving, the Dallas suburb probably best known as the home of the Byron Nelson Golf Classic and the long-gone Texas Stadium.

The one-story museum, located on Irving Boulevard just a block east of Big State Fountain Grill (a classic local diner), houses a collection of records, clothes, instruments, posters, handwritten notes, and more amassed by Thomas Kreason since the 1980s, when he worked setting up concerts in Dallas and curated memorabilia for the Hard Rock Cafe.

Kreason’s first bit of memorabilia, he recalls, was a Dolly Parton autograph he scored in the 1980s as a member of a lighting crew at the Anatole Hotel, which hosted concerts in those days.

“I ran into her backstage,” recalls Kreason, the museum’s founder and director. “She said, ‘Hey.’” He reported this to his crewmates, who asked if he’d gotten an autograph. He had not.

“Doesn’t count if you didn’t get any autograph,” they told him. “So,” he says, “I went back after the show and got it.”

Kreason, who eventually honed his collection to focus on Texas, opened the Texas Musicians Museum in Hillsboro in 2007, moved briefly to Waxahachie in 2010, and then opened this past summer in Irving, where the city agreed to redevelop the former dealership building and lease it to the museum as part of city efforts to revitalize the Heritage Crossing area.

The 9,800-square-foot building revels in music, from the signs shaped like guitar picks that mark the exits to the dirt from legendary Texas music locations—Luckenbach dance hall, Austin’s Broken Spoke honky-tonk, and Stevie Ray Vaughan’s family home in the Oak Cliff neighborhood of Dallas—sprinkled around the outdoor music garden and under the stage that hosts weekend concerts. (During cold weather, acoustic shows are held indoors.)

Along with Kreason’s own collection, the museum displays contributions from former KZEW Dallas radio Program Director George Gimarc, including a portable field recorder that folk music collector Alan Lomax used. There are also items donated by musicians’ families and others. Bob Wills’ family loaned a fiddle that Wills bought for $30 in 1939 (when Bob was 34 years old), along with the bill documenting the sale.

The Texas Musicians Museum is full of stories. A 45-rpm Duane Eddy record, “Detour,” is the one Waylon Jennings played in the ’50s when Jennings was a disc jockey at radio station KLLL in Lubbock. Ironically, at the time, Eddy was married to Jessi Colter, whom Jennings would eventually marry. Nearby sit Jennings’ boots and notepads that he had printed with the inscription, “This is no dress rehearsal. We are professionals, and this is the big time.”

Another case holds a receipt for five suits, costing $335 total, for Buddy Holly’s band in 1957. Wait: Buddy Holly had only three other guys in his band. Kreason explains that manager Norman Petty had declared, “If you’re getting a new suit, I’m getting one, too.” The museum also displays a 1949 school yearbook with Holly’s photo, “King of the sixth grade” printed beneath.

On and on the memorabilia goes: rows of platinum albums including Erykah Badu’s 1997 “Baduizm”; the poster from Selena’s last major concert, held in the Houston Astrodome on February 26, 1995; The Big Bopper’s music videos—some of the first music videos ever—including 1959’s “Chantilly Lace.”

At the back of the museum sits the little Neon Armadillo Cafe, serving beer, wine, margaritas, and small bites like hot dogs and chips and queso.

The museum’s gift shop offers guitars, T-shirts, and posters, some of them signed—including a late ’60s Harmony electric guitar signed by Los Lonely Boys and priced at $750—all beneath a 58-foot-long, brightly painted plywood guitar that was a stage ornament during Eric Clapton’s 2004 “Crossroads” concert at the Dallas Cotton Bowl. Clapton, of course, is not a Texan. But when Kreason had the opportunity to claim the huge prop, his answer was simple: “Sure.”

Kreason says the museum’s collection of thousands of pieces of memorabilia will be rotated in and out of display to showcase the many aspects of the state’s musical history. After all, he says, “There’s no place music could develop and evolve more than it has here in Texas.”