Written by Art Williams, Photographs by Michael Amador | From the January 2016 issue | Updated: October 28, 2018 | Filed Under: Culturemade in texas 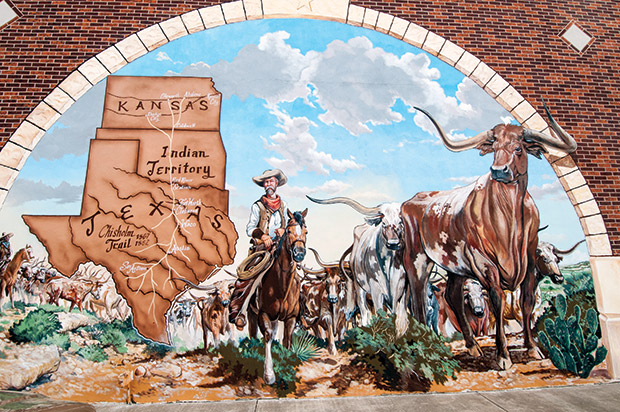 Stylle Read took an interest in re-creating old-time Texas with colorful artwork while growing up in Lufkin in the 1950s. “It was the decade of Davy Crockett on TV’s wild frontier and the John Wayne Alamo movie,” he explains. “I was hooked on history from a very young age.”

For more on Stylle Read, including information about where to see some of his murals, along with photos of them, visit www.stylleread.com.

is scheduled for Nov. 18-19, 2016. Learn more about the event and its Historic Calendar mural project at www.artwalkalpine.com.

Born in 1953 “with a palette and brush in my hand,” Read was influenced by his father, Sleepy Read, whose paintings range from abstracts to Texas landscapes. The youngster began mixing his love of art and history in junior high school, when he painted a scene of the Battle of the Alamo after a trip to San Antonio.

Today, Read’s murals depicting scenes of Texas history and culture make him one of Texas’ most recognizable painters. About 150 of Read’s murals can be found across the state (30 of them outdoors), especially in towns with an affinity for their Old West and ranching heritage, such as Alpine, Fort Worth, San Angelo, and Read’s home base of Cleburne.

Often portraying working cowboys, rugged landscapes, noble Longhorns, and frontier settlers, Read’s style draws inspiration from post office muralists of the 1930s and ’40s, including Tom Lea of El Paso, as well as the famous Mexican muralist Diego Rivera. Read also credits one of his professors at the University of North Texas, Bob “Daddy-O” Wade—known for outsized pop art such as the huge cowboy boots at San Antonio’s North Star Mall—for his fondness for large works of art. And Read notes, “There’s nothing like a [C.M.] Russell, the first real cowboy artist.”

When I caught up with Read this summer, he was heading out to paint his seventh mural in Alpine. Read’s murals in the West Texas town include the Mercado Mural, a Mexican market scene on a railroad warehouse that he created with volunteers as part of the Alpine Artwalk’s Historic Calendar Mural Series. When Mercado Mural was completed in 2014, the Big Bend Courier toasted the citywide gallery of Read creations: “As St. Louis is known for Scott Joplin and Chicago/Oak Park is known for Frank Lloyd Wright,” wrote Bryon Garrison, “Alpine will indubitably be known for the beautiful murals created by Stylle Read.”

Big Brewster, a mural collage on an exterior wall of Alpine’s Kiowa Gallery, pays tribute to Texas’ biggest county and features area notables such as Everett Townsend, who led the effort to create Big Bend National Park, and pioneer rancher Milton Faver, shown driving cattle across the Rio Grande in a canyon scene drenched with midnight blue. Alpine’s Quality Inn features a Read work that includes the Trans-Pecos legend of the “murder steer,” a tale of a maverick branded with the word “murder” after a wrangler was killed in a dispute over the steer.

A mural in Alpine’s Reata Restaurant, which takes its name from the famous home of Rock Hudson and Elizabeth Taylor in the 1956 movie Giant, depicts cast member James Dean in front of the house on horseback, looking back toward the viewer with a classic Dean expression.

Read’s expansive creations are a common fixture during the annual Alpine Artwalk. Held annually on the Friday and Saturday before Thanksgiving (November 18-19, 2016), the event features about two-dozen local galleries and shops along with art vendors, a parade, a street dance with live music, and food booths. Organizer Keri Blackman, owner of the Kiowa Gallery, says, “Stylle’s dedication to historical accuracy and his unique Southwestern style make his murals favorites with local folks and visitors alike. People come and sit in lawn chairs to watch him paint.”

The Trans-Pecos region is a second home for Read. In the 1980s, he spent four years there, for a time stretching out on a saddle blanket in the semi-ruin of the legendary Perry Mansion built during Terlingua’s mining days. Nearby, Read’s Spirit of Terlingua mural in the Starlight Theatre Restaurant and Saloon portrays a night scene of locals from the town’s different eras—miners, cowboys, bandits, chili heads, and river outfitters—gathered around a campfire.

Fort Worth rivals Alpine for its concentration of Read murals. A large Welcome to Cowtown painting greets folks in the Stockyards Visitor Center, depicting a bird’s-eye view of the historic district and the twice-daily cattle drives down Exchange Avenue. Two cowboys ride hard across the prairie in Read’s mural on an outside wall of Maverick Fine Western Wear in the Stockyards. At the Historic Camp Bowie Mercantile, Read captures a different Texas era with his interpretation of 1920s life along Fort Worth’s Camp Bowie Boulevard.

Read’s largest work spans all 216 feet of the parking lot wall of Cleburne’s Wright Plaza. Anchored by a portrait of town namesake Confederate Major General Patrick Cleburne, the work covers local history from Caddo settlements and early explorers to pioneers, the Chisholm Trail, the railroad, courthouses, and 21st-Century gas drilling. One section highlights Slats Rodgers, the maverick Cleburne airman who in 1912 constructed one of the first airplanes built in Texas.

When not on the road for painting jobs, Read hangs his 12-gallon Stetson on the outskirts of Cleburne, where he and his wife, Nancy, keep a few Longhorns, raise horses, collect saddles, and indulge a love of classic cars. “I like to restore early 1950s Cadillacs,” Read says.

In 2016, you can find Read in Midland creating a mural on the landmark Yucca Theater. A collage of area history, the work will include both Bush presidents outside of their Midland home of the 1950s. The artist will also return to San Angelo—already home to four of his murals that are part of the Historic Murals of San Angelo project—to create a depiction of rock-and-roll history at the former recording studio where one-hit wonders J. Frank Wilson and the Cavaliers recorded the classic “Last Kiss.” Also this year, Trans-Pecos folks can watch for Read back in Alpine, where he’s scheduled to paint another mural, this one portraying the regional music scene and famous musicians—from Elvis to Willie Nelson—who have played in the Big Bend.

Asked if he wants to be remembered like his artistic heroes, Read says, “I just hope my work lasts like those guys’ has. I want folks to enjoy it for a long, long time.”