The Fringe of Footwear

Written by Matt Joyce, Photographs by Kevin Stillman | From the August 2014 issue | Updated: July 10, 2020 | Filed Under: Culturemade in texas 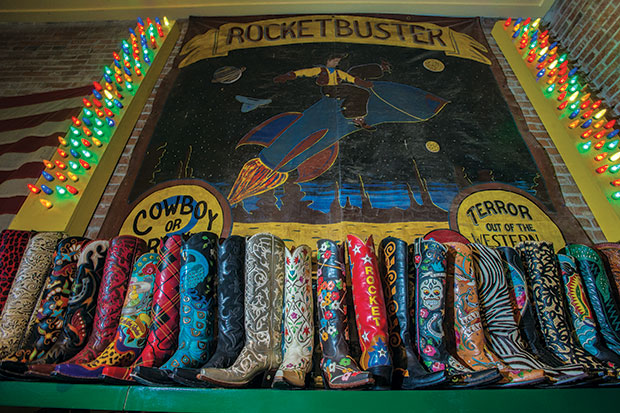 Nevena Christi points to a label painted on a brick wall inside the El Paso workshop of Rocketbuster Handmade Custom Boots. “Wildcat,” it says. Elsewhere in the 1900 warehouse, similar labels mark sections for ocelots, badgers, and rats. “The building was a trappers’ warehouse,” Nevena explains. “The names of animals are written all over the walls, so the building has always had a history in leather, let’s put it that way.”

Leatherworking lives on at this weathered warehouse in El Paso’s revitalized Union Plaza district, although the trappers of yore would never recognize the visual cacophony that characterizes the interior today. Its walls shining with colorful displays, such as a neon cowboy astraddle a rocket, Rocketbuster’s home—open for tours by appointment—is a brassy shrine to Western kitsch and funky creativity. The not-so-subtle intention of all this artistic spunk? To inspire a new generation of custom bootmakers to make one-of-a-kind boots, and to preserve an American tradition that risks irrelevance in an age of mechanized mass production.

“This industry is dying,” says Nevena, the “bosslady” of Rocketbuster. “The supplies are getting harder to find, everything’s going to China, and all these old guys are retiring. It’s not just a business for old men who have done it forever. Bootmaking has got to be fun for young people, and if it doesn’t become cool and rock-and-roll to young people, it will die.”

Nevena’s mission to preserve custom bootmaking stems from her experience as an artist who became enamored with the traditional craft. In the 1980s and ’90s, she was working in the fashion industry in New York City, designing cocktail dresses for Nicole Miller, when she asked Rocketbuster owner Marty Snortum to make a series of boots for a runway show. (Marty, an El Paso photographer, acquired the boot business in a 1989 barroom trade of his 1953 Cadillac Hearse.) Introduced through the runway project, Marty and Nevena fell in love and married. In 1997, Nevena moved to El Paso and took over Rocketbuster.

“I come from a graphic design and fashion design background, so my patterns are intricate and complicated,” Nevena says. “I like to draw original designs to fit each person’s legs.”

During a tour of Rocketbuster, visitors can see Nevena and her eight employees bring those drawings to life in the form of custom cowboy boots, from square-toed to rounded or pointy. Working at broad workbenches, the craftspeople cut, paint, and stitch leather into remarkably artful boots that depict anything a customer can dream up, from family crests to hometown homages, religious icons, cowboys, skeletons, and peacock feathers. (The workshop displays shelves of boots bearing fanciful designs, but they’re all samples. To get your own pair, you’ve got to place an order.) Nevena says a recent challenge was designing a pair of boots for Willie Nelson’s 80th birthday, including a map of his life and the words and music to “On the Road Again.” 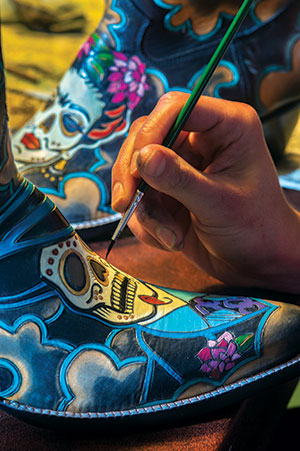 No design idea is too wild for a pair of Rocketbuster custom cowboy boots.

“How are you going to make that look good?” Nevena says. “It’s total insanity, but I usually pull these things off.”

“Rocketbuster gets pegged as retro and vintage all the time, but they’re really not,” Jennifer says. “Nevena can do that if she wants, but she has the ability to take symbols of luck and chance, or risk and danger, and update them so that they mean something now. It’s things like that that allow people to see themselves in cowboy boots, and it’s not their dad’s boots or their grandpa’s boots.”

Nevena may have taken an unconventional path to bootmaking, but she says that El Paso remains the best place to run a custom boot company. Bootmaking here enjoys a long history: Situated along the route of westward cattle drives in the mid-1800s, El Paso provided plenty of raw material for leatherworking. Drawn to the western boomtown, pioneer craftsmen discovered high demand among cowboys and cavalrymen for leather goods like saddles, cuffs, holsters, and boots. Over time, the concentration of skilled bootmakers attracted major companies such as Tony Lama and Lucchese.

El Paso’s infrastructure of leather importers gives Rocketbuster access to the finest materials, such as calf tanned in France, kangaroo tanned in Italy, or goat tanned in Massachusetts. “When we make an expensive product like ours, I have to touch every hide and make sure it’s the crème de la crème, because we sell a very specialized item to people who want exactly what they want, and it’s got to be of a certain caliber,” Nevena says.

However, the traditional skill of making boots, which has been passed down through generations, is disappearing as the industry shifts to mass production and outsourcing. Nevena says that replacing each retiring craftsman is a challenge. To find new talent, she looks to other trades that require hand-eye coordination, such as artists, carpenters, and bartenders. “I really want a sushi chef,” Nevena says. “To teach a sushi chef to skive leather would be perfect.”

Custom bootmaking is painstaking work, and given the high prices that customers pay for Rocketbuster boots—from $950 to $5,000—the workshop takes its time. Rocketbuster finishes about six pairs of boots per week, has an order backlog of about 100 pairs, and currently runs five months for delivery. Because of the demands of custom bootmaking, significant growth would be counterproductive for Rocketbuster, Nevena says, but she hopes the company’s success will be good for the industry as a whole.

“If we don’t do it and make this fun and young, and teach, then what’s going to happen? It’s not going to exist, and that would be sad. Because no matter how the world feels about America, people will always love rock-and-roll and cowboy boots.”