The Men in Blue 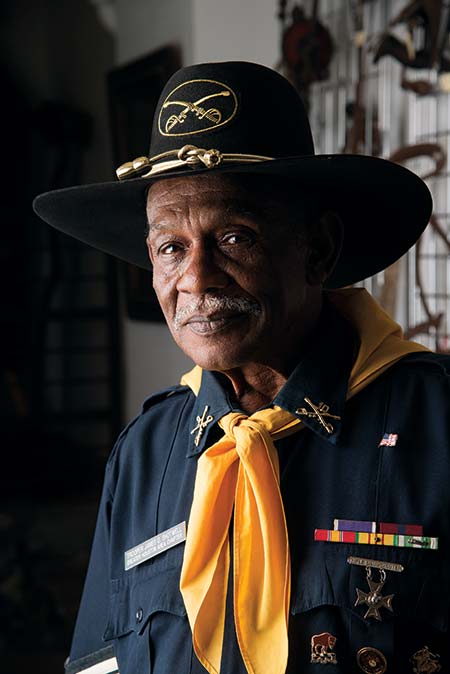 Trooper James Shotwell is a U.S. Marine veteran and member of the Greater Houston Chapter of the 9th & 10th Horse Cavalry Association, a group dedicated to preserving the history of the Buffalo Soldiers.

The Lone Star State has long celebrated its Wild West history—the gritty pioneers, the proud Native Americans, and the hardened lawmen who fought to establish frontier law and order. Perhaps the most iconic symbol of justice in the wilderness, especially as mythologized by Hollywood, is the U.S. Cavalry charging forward on horseback to save the day. Commemorating the history and heritage of the African Americans among the Cavalry is the primary mission of the Buffalo Soldiers National Museum in Houston.

“They were peacekeepers in the American West. They built camps, forts, and railroads, delivered the mail, and protected settlers. Without the Buffalo Soldiers, the westward movement would have been delayed by 50 years.”

As Capt. Paul J. Matthews, an Army veteran who founded the museum, explains, “If you were traveling from San Antonio to El Paso in the late 1860s through the 1870s, and you were pinned down by outlaws or warring Native Americans—who would most likely come to your rescue? Somebody from the 9th or 10th Cavalry, that’s who. Those were the Buffalo Soldiers, the men in blue that patrolled the roughest terrain in Texas.”

While the indigo color of those U.S. Cavalry uniforms is common knowledge to many folks, the African-American heritage of entire units of soldiers who wore them might not be. Likewise, although people worldwide have grooved to Bob Marley’s famous reggae song “Buffalo Soldier,” few may understand how the lyrics pertain to Texas history. The Buffalo Soldiers National Museum seeks to correct those oversights and foster deeper appreciation of the role of African Americans in our nation’s military service.

Following the Union victory in the Civil War, the U.S. Congress created several new Army units—including the 9th and 10th Cavalry and later the 24th and 25th Infantry—consisting solely of African-American men, some of whom were emancipated slaves. Given the lingering racial tensions in the former Confederacy, the Army assigned those troops to sparsely populated frontier regions well beyond the Mississippi River, including the western half of Texas.

“They were peacekeepers in the American West,” Matthews explains. “They built camps, forts, and railroads; they delivered the mail, ran telegraph wire, charted the land, chased down outlaws, and protected settlers. Without the Buffalo Soldiers, the westward movement would have been delayed by 50 years.”

According to lore, the distinctive nickname for these servicemen originated among Native American warriors as a term of respect for their fierce fighting skills and rugged endurance. However, some sources also point to the texture of their hair or the shaggy buffalo-hide coats they wore in winter as possible inspirations for the moniker. Whatever the case, those first peacetime all-black regiments became known as the Buffalo Soldiers, an honorific phrase subsequently adopted by other African Americans serving in the U.S. military.

Consequently, the history encompassed by the Buffalo Soldiers National Museum is broader than one might initially surmise. “We focus on the original Buffalo Soldiers, but in actuality we give a perspective on the African-American military experience from 1770 until 2000, that is, from the Revolutionary War all the way to the Persian Gulf War. Or, to put it another way, from Crispus Attucks to Colin Powell,” says Matthews, who earned the Bronze Star and other medals while serving in Vietnam. 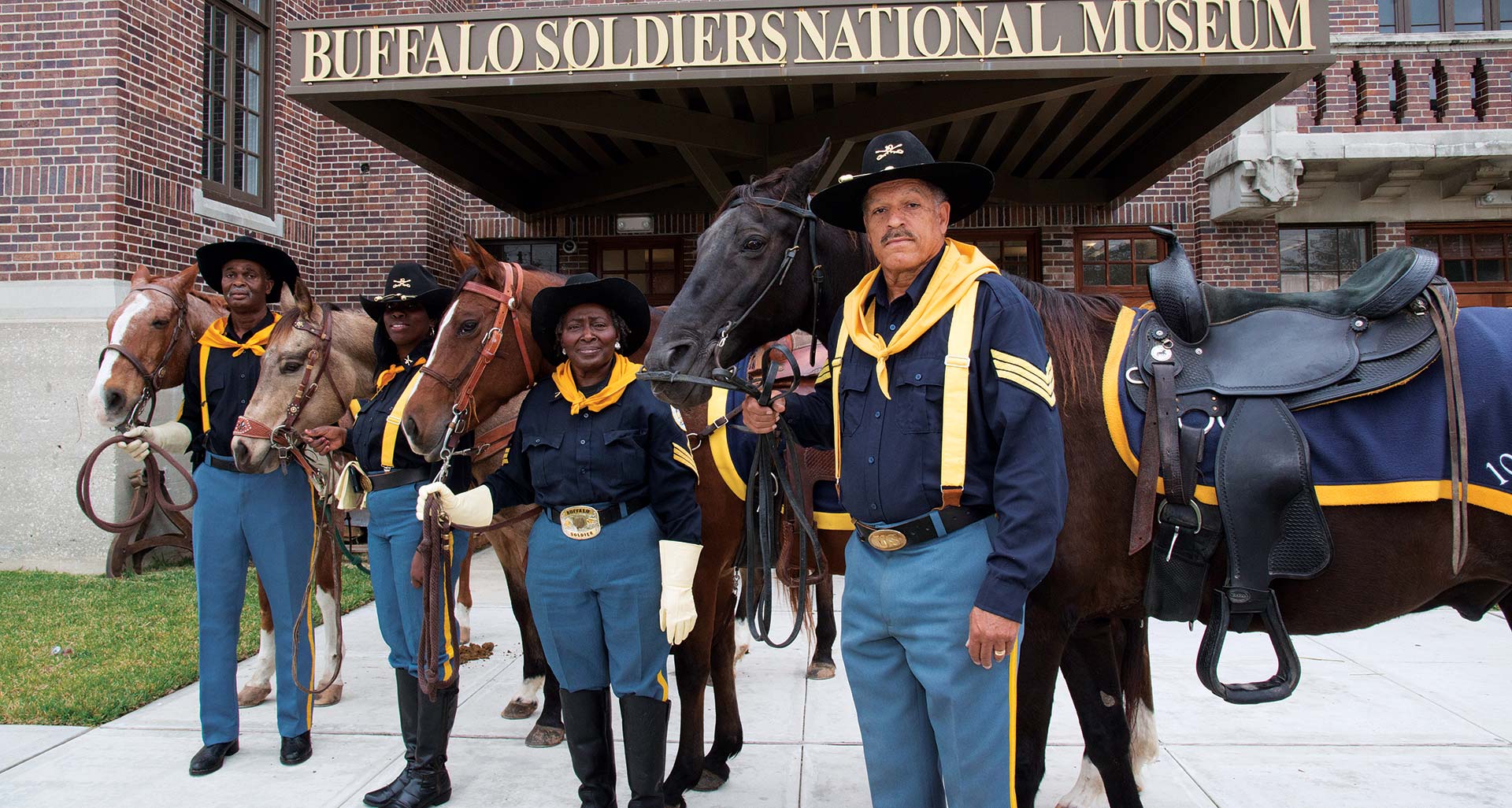 The museum features a wide range of permanent exhibits, including those covering themes beyond Buffalo Soldiers: the major U.S. wars, women in the military, chaplains of the West, the origins of Juneteenth, and the evolution of battlefield communication devices dating back to the days of the African drum. There are also commemorations of remarkable individuals, such as former slave Milton M. Holland, the first African-American Texan to receive the Congressional Medal of Honor, awarded in 1865 for his bravery in leading Union troops to victory in a Civil War battle in Virginia. Another display honors African-American NASA astronauts, Matthews explains, “because they are on the vanguard of civilization, just like Buffalo Soldiers in 1866.”

The exhibits comprise explanatory text and historical artifacts such as uniforms, medals, flags, weaponry, documents, photographs, commemorative works of art, tools, and survival gear. There is also a 14-minute documentary film highlighting African-American military service that shows in the library room, a repository of more than 1,500 books on military history and the place where tours typically begin.

One of the more popular attractions is the weapons display, highlighted by a special collection of rifles—from a Revolutionary-era musket to a post-World War II AK47—as well as various handguns, bullets, and shrapnel. There’s also a display of swords, sabers, and ceremonial blades. Another feature is called the “Technology Wall,” an assemblage of military and household implements or mechanical devices from the late-19th and early-20th centuries. Check out the old-style chopping hoe that, legend has it, African-American field workers used to cook corn biscuits known as “hoe cakes.”

“There’s a story behind each document, each artifact, each photograph, or other type of memorabilia,” Matthews says, noting that the museum has a staff of docents and interns available to narrate tours and provide hands-on demonstrations. “We’ve found that visitors often appreciate this legacy more deeply when they not only see the displays but hear the true stories that provide context.”

The military history preserved by the Buffalo Soldiers National Museum extends to the brick-and-limestone building it now calls home, the old Houston Light Guard Armory. Founded in 1873 by former Confederate officers, the Houston Light Guard originally functioned as both a uniformed local militia and a socially elite men’s club, renowned in part for its prize-winning drill teams. In 1925, the group commissioned the prominent architect Alfred C. Finn to design and build the edifice as its new headquarters.

Located near upscale apartments and the Main Street light rail line in Houston’s rapidly changing Midtown district, Finn’s three-story structure is adorned with carved-stone sculptural embellishments, some depicting soldiers shouldering weapons and other militaristic insignia. As Rice University architectural historian Stephen Fox puts it, “The armory’s scale, substantial materials, distinctive architecture, and martial ornament make it an exceptional building, not only in Houston but in Texas.”

Following a major fundraising campaign to purchase and renovate the armory building, the Buffalo Soldiers National Museum opened in late 2012, vacating the generic office building where it began operations in 2001. The renovated armory provides 23,000 square feet of interior floor space on three levels—ample not only for expanded exhibitions and a large gift shop, but also for classrooms supporting a variety of educational programs. Angela Holder, a museum board member and a history professor at neighboring Houston Community College, notes that the place continues to evolve “not only as a historical repository but as a teaching facility as well.”

Indeed, a tour of the Buffalo Soldiers National Museum is ultimately a learning experience for most visitors. “This is not a ‘black’ museum but an American history institution,” Matthews asserts as he points to a 10th Cavalry flag that an African-American NASA astronaut once carried aboard the Space Shuttle. “It’s about all of us—and especially us here in the western U.S.,” he adds. “Texas is Texas, in part, because of the Buffalo Soldiers.”