Written by Art Williams, Photographs by Will van Overbeek | From the January 2015 issue | Updated: June 12, 2020 | Filed Under: Culturedetour 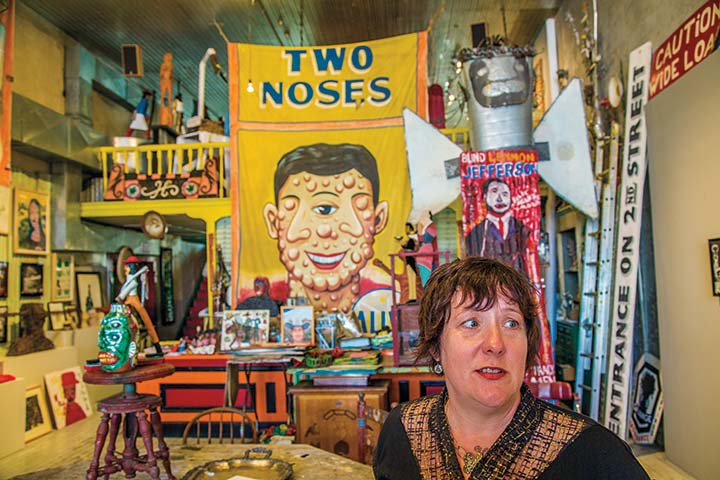 It’s hard to imagine two people in the whole state who have more fun in their work than Julie and Bruce Lee Webb of Waxahachie. That sense of fun is apparent even before you enter their art gallery in a 1902 building just off the town square.

Whimsical exhibits in the front-display window alone include intricate toothpick sculptures of a Ferris wheel, the Eiffel Tower, and other sculptures made by the late Venzil Zastoupil, a self-taught artist in Dallas known as the “Toothpick King.” Inside, colorful creations swirl like a crazy quilt of quirky Americana.

The Webb Gallery shows work by unique individuals described as “outsider” or “self-taught” artists. “We like handmade things that have a rustic quality,” explains Bruce Lee, “art that is naive and raw.”

“We also like the narrative aspects of the work we show,” adds Julie. “Painting, sculpture, assemblage, whatever it may be, it speaks to the viewer like a form of storytelling. ”

Having grown up in Richardson and Garland, the couple moved to Waxahachie in 1986. There, as aficionados of the old and the odd, they opened an antique store. On a trip to New York, they met Herbert Waide Hemphill, one of the founders of the American Folk Art Museum, and soon began collecting work by outsider artists.

Back in Texas, the antique store morphed into a gallery as they established relationships with artists throughout the state and beyond. They met the late Rev. Johnnie Swearingen at his home in Brenham. The late Hector Alonzo Benavides rode the bus from Laredo to introduce himself to the Webbs as “the most obsessive man you’ll ever meet.” And when they met Ike E. Morgan of Austin, best-known for his brightly colored, primitive portraits of U.S. presidents, he confirmed he has used art as therapy to help him recover from mental illness.

The Webb Gallery has hosted three solo shows of paintings by Texan Esther Pearl Watson. Born in 1973, Watson and her siblings had peripatetic Texas childhoods with a father who built scrap-metal spaceships in the yard, convinced he could sell his flying saucers to NASA or Ross Perot. Though she was embarrassed by her father’s eccentricities growing up, her perspective changed in college, after discovering the 1985 book In Advance of the Landing: Folk Concepts of Outer Space by photographer Douglas Curran, which documents individuals with similar obsessions. As she learned of the outsider art world, she came to see her father as an artist—and began to create art on her own.

Watson’s intentionally primitive paintings of scenes from her Texas childhood often feature spaceships hovering over Dairy Queens, cow pastures, neighborhoods, and small-town rodeo arenas. “Because of my father,” she says, “I am inspired by self-taught artists or people who make art not because they want recognition in the art world but because they have a vision to make art. I feel like this is the visual language of my own heritage.”

Among those taking note of Watson’s distinctive artworks at her Webb Gallery exhibition were curators from the Amon Carter Museum of American Art in Fort Worth. A new acrylic painting, set in Comanche County like many of her creations, will be on view at the museum beginning in June as part of a year-long program devoted to local contemporary artists. “My grandfather is repairing a fence in the painting,” says Esther Pearl. “He was a hero to me. The painting references how land and family make us who we are.”

Paintings by another Webb Gallery artist, the late Walter Cotton of Mexia, will have continued exposure at Dallas’ African American Museum. The Webbs had acquired the works by Cotton, a former chauffeur and school principal, from a Mexia collector who had preserved the art in his well house and barn. The Webbs donated them to the museum last year.

Exploring the blue highways in search of relics and rarities to sell in their gallery and at Austin’s Uncommon Objects provides the Webbs with some of their most satisfying professional fun. A recent visit to their booth at Uncommon Objects revealed a wonderland of old signs, folk art, antique books, and such unexpected items as decorative vases made from World War I artillery shells.

“We try to show art and antique items that we like, in case they don’t sell and we end up keeping them,” Bruce Lee Webb confided. “But then, sometimes when you make a sale, you regret it!”