Under the Comanche Moon

Tracing the comanche trail by the light of the moon 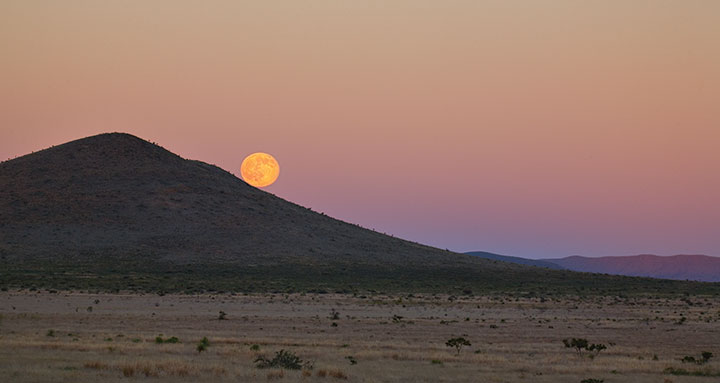 Who, on Earth, can resist the allure of a full moon? Twelve nights each year, we gaze into the sky as the lunar satellite casts cold light on the planet.

Explore the history of the Comanche in the Big Bend region at Big Bend National Park’s Persimmon Gap Visitor Center, the northern entrance of the park on US 385.

Poets wax, coyotes howl, and tides surge to the beacon rising above a darkening horizon, all of us patrons to a circadian rhythm governed by master and minion, sun and moon. We humans grant the moon our obsession, however, unlike the nocturnal entities commanded by natural law. In truth, the moon’s control over our own physiology is no greater than the pull of a grain of sand. We are “lunatics” instead, merely divining the moon with incantations, attributes of an improbable occult, and basking in its immutable glow.

It wasn’t always so. More than 200 years ago, the full moon signaled the movement of the Comanche along the southern leg of the Comanche Trail. As accomplished horsemen traveling a network of seasonal routes south of Comancheria—the Comanche empire encompassing much of the territory now comprised of West Texas, the Panhandle, western Oklahoma, eastern New Mexico, and parts of Colorado and Kansas—the Comanche crossed the Big Bend country in the waxing gibbous light on their way to the border territories of New Spain. Across the Rio Grande lay Spain’s vulnerable missionary efforts, which sought to transform local inhabitants into citizens of the Spanish state and the Catholic Church. The mission communities, with their haphazard presidio defenses, were no match for the Comanche, who, in brief but decisive forays, would raid and loot the settlements, often burning them down. The full moon, at its best in a pre-industrial sky, illuminated the transfiguration, casting harsh light on colonies in scattered ruins as the Comanche made colonists into wives or trade slaves, and relieved the settlements of their rations, their weapons, and their horses. By the mid-1800s, Anglo pioneers had also become targets of the moonlit Comanche raids and invented the term “Comanche Moon.” 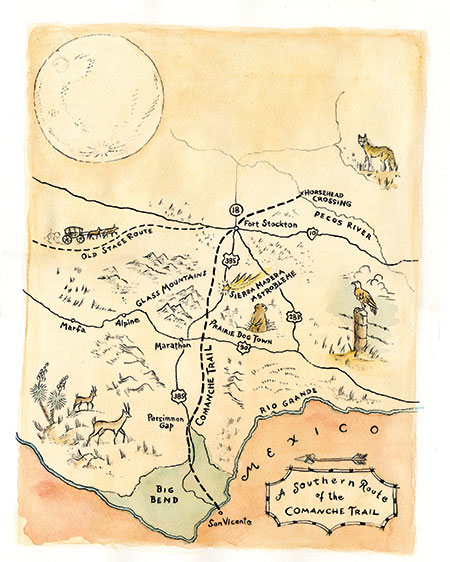 Along the northern edge of Big Bend country lies Fort Stockton, a frontier community established near what was once a naturally occurring spring network known as Comanche Springs, named for the horsemen who congregated and camped there. The town is a good starting place for adventurers who wish to follow a close approximation of the southern leg of the historic trail. Other than surviving 19th-Century maps and historical references that provide a sketch of the route (actually a series of interconnecting and parallel tracks), almost nothing of the original trail remains. US 385 south to Big Bend National Park reflects the trail’s general pathway, passing over specific landmarks identified in 19th-Century documents.

In preparation for your journey, take a tour of the historic Fort Stockton, town namesake and site of a frontier military garrison built in 1867. By the mid-1800s, the Comanche had begun to lose their stronghold on much of their Texas territory, yet the garrison was still a necessity, providing protection for travelers on the wagon route between San Antonio and Chihuahua, Mexico, as well as the Butterfield Overland mail route and the Old San Antonio Road. This confluence of tracks, busy with early American traffic, intersected the much older Comanche Trail at Comanche Springs.

Today, four buildings remain of the original 35 that comprised the military garrison. Many of them, like the surviving Guard House, were built from locally quarried limestone or handmade adobe bricks. A self-guided tour explores the restored structures surrounding the original parade grounds, including reconstructions of the barracks and kitchen.

About 18 miles south of Fort Stockton, just past the Pikes Peak Gas Plant, the view across the massive basin and peaked hills in the near distance has changed little since the last time the Comanche passed through. Known as the Sierra Madera Astrobleme, the basin and hills are the result of an asteroid or comet impact that occurred approximately 65 million years ago. The shock wave of the impact created the six-mile-diameter basin and the eroded hills, known as the Sierra Madera. US 385 travels down the northern crater slope, through the western edge of the Sierra Madera, then up and over the southern crater wall. Highway markers indicate your entrance and exit through the extraterrestrial phenomenon.

A few miles south, the highway passes through the northern edge of the Glass Mountains and enters a high desert basin dotted with soaptree yucca and grazing pronghorns. Here, the Comanche no doubt spread out across the landscape, moving steadily through an expanse of grass that in places reached as high as their horses’ flanks. You’ll also begin to see evidence of a black-tailed prairie dog colony that perhaps reached into the millions of animals during the heyday of the Comanche Trail. Today’s relatively small colony is one of the southernmost prairie dog towns in the United States. The colony populates both sides of US 385 along a stretch about 10 miles north of Marathon. A small pullout provides an opportunity to view the burrows and witness the prairie dogs’ goofy antics.

The pullout is also a great place to watch a rising full moon. Often appearing like a blood orange squeezed through cracks in the low-slung hills along the horizon, the full moon brightens the landscape so thoroughly that details near and far can still be distinguished long after sunset. The spectral light also illuminates the spirit of the Comanche here, invoking their movement through the grasslands on horseback in buckskin and breechcloth, black braids, and locks wrapped in fur, beads, porcupine quills, cloth scraps, and feathers; ears pierced with hanging shells, bones, brass rings, and elk teeth; tattooed arms and chests; faces skillfully painted with pigments from roots, berries, bark, and clay. These were formidable men with singularity and purpose, daunting personalities with complexities that hold little relation to the caricatures painted by settlers determined to put an end to their prominence.

Once past Marathon, the next 40 miles will take you through rough, dry ranching country, a long haul for the Comanche who knew intimately the route and its cryptic watering holes. Within the hour you’ll reach Persimmon Gap, the same mountain pass used by the Comanche to cross into the lower Chihuahuan Desert.

Today, the pass serves as the northeastern entrance to Big Bend National Park. For the next 50 miles, you’ll be driving through a landscape described alternately by Lt. William Echols during his 1859-60 expedition as abundant with “rain-water and a field of the finest grass it had been our fortune to meet” and “the most difficult country we have yet traversed.” The Comanche utilized a few different paths through the park area to access various crossings of the Rio Grande.

Echols also noted evidence of the Comanche’s presence along the route in his journal entries. “The whole region today is covered with Indian signs to within 12 hours ago,” he wrote. “Horse tracks as fresh apparently as our own were at the Spg. [spring] and trails in every direction concentrating toward the crossing.”

By the mid-1800s, Anglo pioneers had also become targets of the moonlit Comanche raids and invented the term “Comanche Moon.”

The “crossing” of Echols’ journal entry most likely refers to an intersection of trails and the Rio Grande located across from the present-day community of San Vicente, Mexico. Nearby, modern-day travelers can pitch a tent at Big Bend National Park’s La Clocha campsite, located along the primitive East River Road.

Here, the river runs a silky thread through the darkness, reflecting the ambivalence of the night sky and still shedding the ripples of a flagrant past. As the Comanche and their horses forded the shallows, nearby lives deep in slumber or with a watchful eye toward moonlit movement would soon change forever. It was, for many, the arrival of the apocalypse, transforming their known world into a fiery, violent eruption that ended, just like the Comanche Trail today, with nothing remaining but the light of the full moon.