Written by: Bobbie Jean Sawyer
Photos by: Will van Overbeek

Written by Art Williams, Photographs by Will van Overbeek | From the February 2016 issue | Updated: February 11, 2016 | Filed Under: Culturemade in texas 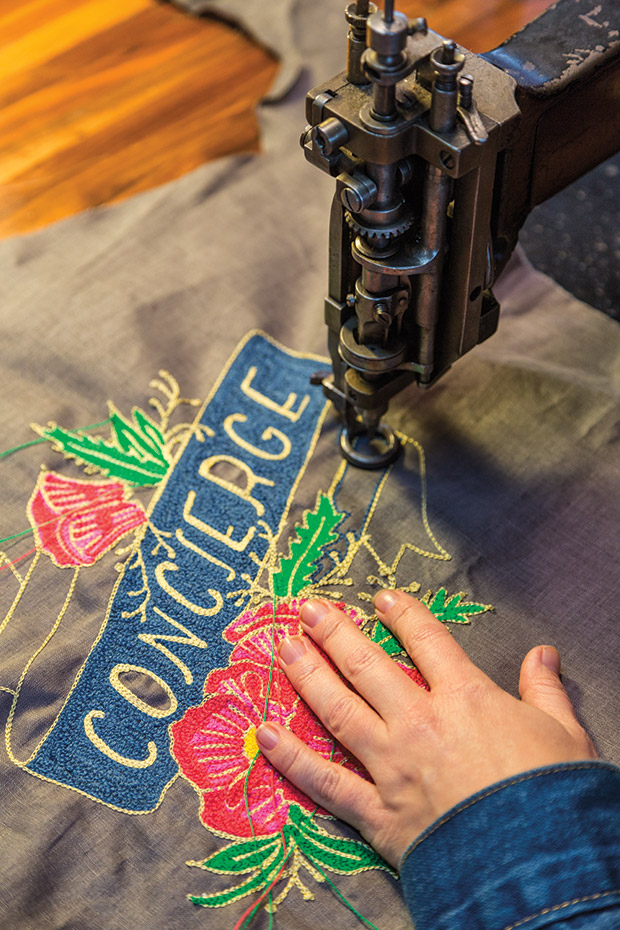 For Austin-based clothing company Fort Lonesome, the classic Western pearl-snap shirt is all about wearing your heart on your sleeve—or at least around your shoulders. Proprietor Kathie Sever and her fellow tailors practice what she calls “thread-based storytelling,” creating one-of-a-kind embroidered garments inspired by her clients’ lives, passions, families, and influences.

Fort Lonesome takes custom-order inquiries, posts upcoming events, and sells accessories on its website. Custom embroidered garments start at $400 depending on the amount of embroidery involved.

Based in Sever’s home studio, Fort Lonesome stitches colorful imagery—from fowl to flowers, portraits, maps, and guitars—all with a flavor of classic Western wear. Sever and her four employees achieve the classic look with a careful eye and the help of a stable of vintage machines from the 1950s and ’60s—Loretta, the straight-stitch machine; and Dolly, Patsy, Clementine, and Tanya, all chain-stitch machines.

Sever, a California native who moved to Austin in 1996, compares chainstitching, in which a series of looped stitches form a chain-like pattern, to using an Etch A Sketch (although it’s not anywhere near that simple). Directed by a hand crank, chain-stitch machines allow the artist to follow drawn patterns to create elaborate embroidered designs.

Fort Lonesome has its own share of celebrity clientele. Texas natives Ethan Hawke and Richard Linklater have been known to sport Fort Lonesome custom wear to movie screenings and parties. Last March, a photo of Bill Murray posing in his own Fort Lonesome shirt made the rounds on social media. Murray’s custom pearl-snap is adorned with a pair of armadillos climbing up each side of his chest and the initials “WM” embroidered on the cuffs. In the tradition of Nudie Cohn, the women of Fort Lonesome have also made their contribution to Western-themed stage wear, outfitting country singer-songwriter Nikki Lane with a rhinestone cosmic cowgirl suit for her set at the Newport Folk Festival.

Though she grew up taking notes from her seamstress mother, Sever first fell in love with Western wear after art school, while working on a ranch in Montana. There, she helped clean cabins and tend horses, and she witnessed the careful consideration that went into the rugged cowboys’ evening attire of crisp pearl-snap shirts and perfectly pressed Wrangler jeans. The idea of clothing that was both beautiful and pragmatic inspired Sever.

“Western wear embodies the spirit of adventure that we like to think of as being part of our cultural identity—that idea of heading out into the unknown and being independent and fearless and capable,” Sever says.

Sever started out in 2000 with a line of vintage-inspired Western wear for children called Ramonster, but she became disillusioned with the fast pace and mass production of the apparel industry. After receiving requests for custom-made clothing, Sever envisioned a new business model and officially launched Fort Lonesome in 2013.

“I realized the custom work felt way more like what I was primed to do,” Sever says. “I would work for a very long time on one thing in the hopes that this person would want to hold on to it for the rest of their life and pass it on to their children. It wasn’t going to just be another thing in the waste stream.”

Sever says clients often meet with her directly in her home studio to discuss their vision for a garment, including design, fabric, and colors. The backlog for custom orders is two to three months, but stitching on existing garments can be completed within a few weeks.

Given the interest in Fort Lonesome’s new take on a classic style, Sever and company hit the road on occasion, setting up shop at music and maker festivals from Rhode Island to Marfa. With century-old chain-stitch machinery and a jumbo Ziploc bag of thread in tow, the company offers onsite embroidery, often on old denim jackets and hand-me-down shirts brought in by customers.

Last October, I found the Fort Lonesome booth at the Refueled Makers Bazaar in Plano. Though Fort Lonesome offers a variety of gorgeous embroidery patterns to choose from, I couldn’t resist having my name embroidered in bright red thread on the back of my beloved secondhand Levi’s denim jacket. I watched as stitch master Dana Falconberry carefully traced the letters in chalk and saddled up to Patsy, the traveling vintage Singer chain-stitch machine.

A crowd gathered around as Falconberry guided the jacket slowly and steadily under the light of a small desk lamp, using a foot pedal to maneuver the garment and a hand crank to change the direction of the needle. The needle acted as a crochet hook, picking up the thread and pulling it through the denim. Twenty minutes and $50 later, I walked away with a personalized jacket that I know I’ll treasure forever. Next in line, a Star Wars devotee had “Welcome to the Dark Side” embroidered on the back of a vintage black satin jacket. (Pricing for onsite embroidery runs from $20 to $200, depending on the size of the design and the time required for stitching.)

Though all of Fort Lonesome’s creations represent a distinct place or memory to the wearer, Sever says Texas remains a common thread throughout the company’s custom commissions. Bluebonnets, yellow roses, and even the state capitol building make frequent appearances. “People from Texas love anything iconic about Texas,” Sever says. “People come to Texas to be a Texan. [Being a Texan] is very tied up in Western wear and the spirit of the West.”