Dancing in the desert at this West Texas music festival 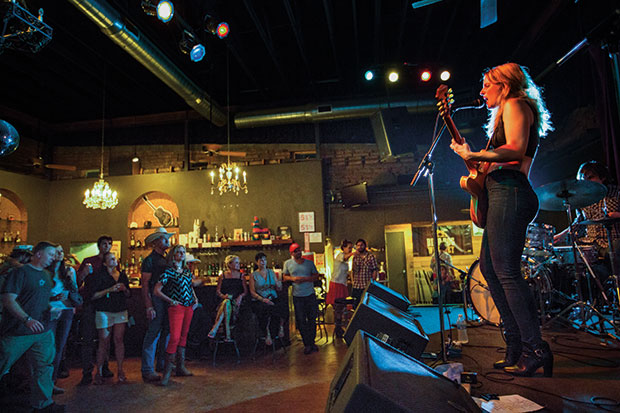 If there’s a description that comes up repeatedly when people talk about the Marfa lights, it’s the way they dance. The color and intensity of the lights vary widely depending on whom you ask, but their darting, dipping, and flickering movements often call to mind some sort of supernatural boogie. Maybe it’s understandable, therefore, that sightings of the Marfa lights spike during the Viva Big Bend music festival, when everyone has music ringing in their ears.

Viva Big Bend, which takes place annually in July, features more than 50 bands in 10 venues spread around Alpine, Marfa, Fort Davis, and Marathon. The music fans who journey to West Texas for the festival tend to appreciate its focus on Texas music—roots-rock, country, Tex-Mex, Latin, blues, and folk—as well as the desert mountain landscape and the peculiarities of the setting, such as the Marfa lights. You don’t meet too many strangers when everybody in the crowd shares a love of live music and West Texas.

“People get on the wavelength out here,” reflects Will Dupuy, a stand-up bass player and leader of the Austin band La Tampiquena. “It’s got a refreshing feeling, an intriguing feeling—and it’s so vast. Life moves a lot slower out here, so you don’t have the whole crowd mentality. Versus bigger festivals, it just feels like this is one big party that we’re all in together.”

La Tampiquena, which plays a funky mix of honky-tonk and Tex-Mex, will be among the acts featured at this year’s edition of the party. Other highlights include Shinyribs, Butch Hancock, Grupo Fantasma, Chubby Knuckle Choir, Soul Track Mind, William Clark Green, Bachaco, and an “All-Star Tribute to Doug Sahm,” featuring the Texas Tornados, Joe King Carrasco, Kevin Russell, Terri Hendrix, Lloyd Maines, and others. The festival is made up of ticketed events at nightclub venues in Alpine and Marfa, as well as free afternoon concerts at the Gage Hotel in Marathon, the Kelly Outdoor Theater in Fort Davis, the Holland Hotel courtyard in Alpine, and a party on Murphy Street in Alpine.

Stewart Ramser, tourism director for the city of Alpine, started Viva Big Bend Music Festival in 2012 to drum up summer travel activity, celebrate Texas music, and showcase the range of live-music venues in the region. The event drew about 3,000 people per day in 2014, about 70 percent of them from out of town. Lodging in Alpine and Marfa fills up quickly for the festival weekend, and the demand for rooms overflows through the area. 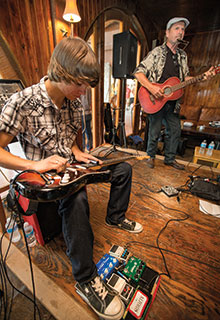 “One of the things people immediately think when they hear ‘West Texas in late July’ is it’s going to be 115 degrees,” Ramser says. “While there are parts of West Texas that are extremely hot, in the mountain area, the high elevations, the climate is much different than the rest of Texas. The bulk of our activities are in communities that are at 4,500 feet or higher.”

Alpine averages a high temperature of 88 degrees on July 25 (the Saturday of this year’s festival) compared to 94 in Houston and 96 in Dallas and Austin, according to the Southern Regional Climate Center. West Texas is also arid, which is a relief for many visitors accustomed to summer humidity. When the sun goes down and a breeze blows through, the air is surprisingly crisp. Alpine’s average low for July 25 is 63 degrees, which is 10 degrees cooler than Texas’ big cities.

The weather is mild enough that Railroad Blues, an Alpine club that has been serving up live bands and cold beer for decades, lights a bonfire on festival nights. The flames cast a warm glow across the club’s gravel yard, which backs right up to the Union Pacific train tracks. The blast of passing locomotives periodically drowns out the rowdy banter rising from the wooden picnic tables. Inside the club, hundreds of musicians’ photos—autographed and framed—decorate the walls. A wooden floor welcomes dancers to the front of the stage, while others gather at barrel bar tables. The festival closes each night at Railroad Blues with music until 1:30 a.m. You can count on a big crowd and a bustling dance floor.

The diversity of venues is one of the interesting parts of exploring Viva Big Bend, along with the scenic drives separating the host towns. For those who don’t want to drive, the festival runs a free shuttle between the host towns.

The Granada Theatre in Alpine is the festival’s largest space with a capacity of 500 people. Set in the shell of a 1929 movie theater, the Granada presents the festival’s biggest acts, such as Grupo Fantasma and the Doug Sahm tribute show this year, and in years past, the likes of Billy Joe Shaver, Reckless Kelly, and the Texas Tornados. Also in Alpine, the Holland Hotel, the festival’s headquarters, hosts free afternoon shows in its courtyard; and the shaded patio of the Reata Restaurant features quieter dinnertime shows, such as The O’s and Elise Davis this year. (Patio tables require advance reservation through the restaurant.)

In Marfa, Viva Big Bend puts on shows at Planet Marfa, an outdoor bar with a quirky desert vibe characterized by adobe, Christmas lights, and a sunken tipi; Padre’s, a classic nightclub set in a century-old adobe former funeral home; and the Lost Horse, an Old West cowboy dive with stucco walls and an intimate stage.

The free shows are mostly outside. In Marathon, bands take the stage on the patio of the Gage Hotel’s White Buffalo Bar. The terracotta roof tiles, chile ristras, and stucco walls impart a Southwestern feel, while overhanging Mexican elder and pine trees shade the patio. The Fort Davis Chamber of Commerce built a bandstand behind the Jeff Davis County Library to join in on the fun of Viva Big Bend. Hosting several bands on Saturday afternoon, the Fort Davis stage attracts a crowd of locals, who make a party out of the day with picnics and washer-pitching. The Fort Davis stage hosted a series of memorable moments in 2014, including a reunion performance by the short-lived but wildly popular Twang Twang Shock-a-Boom, which took Austin by storm in the early ’90s, and a charismatic performance by Joe King Carrasco, who after 40 years of nuevo wavo rock-and-roll, still loves to charge into the crowd to play his electric guitar on the tabletops. (Carrasco will play Railroad Blues on Thursday of this year’s event.)

Along with the music showcases, Viva Big Bend organizes events for both musicians and fans to network and explore music, such as instrument and songwriting workshops, and concerts for children.

The festival’s “Musicians and their Artwork” series provides intriguing insight into the creative process by showcasing musicians performing among their own artworks. One afternoon during last summer’s festival, a small crowd gathered at Galeria Sibley on Holland Avenue in Alpine to listen to a performance by Doug Moreland. Raised in Fort Davis and now a resident of Manchaca, Moreland is a country-western fiddler and songwriter who also creates imaginative chainsaw carvings from wood, such as armchairs flanked by prickly pear cactus and howling javelinas. Moreland, who will participate in the artists’ showcase again this year, reveled in the informal setting of the gallery, telling tall tales, calling on his father Glenn to pick a tune, and riffing on the horn of a passing train by playing “Orange Blossom Special.”

“One hand washes the other,” Moreland says of his dual pursuits of music and chainsaw carving. “I didn’t ever mean for it to be that way, but it just kind of always happened. I still enjoy both equally.” 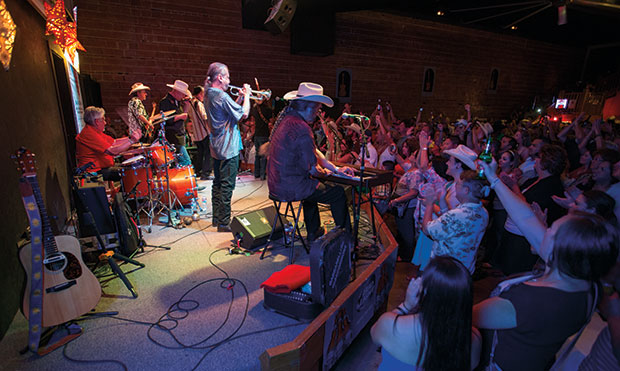 Back for the 2015 Viva Big Bend music festival are the Texas Tornados, pictured here at Alpine’s Granada Theatre.

The relaxed nature of Viva Big Bend allows for this type of interaction between participants, be they musicians or fans. Consider the example of Colin Gilmore and Nicolette Good, Americana/folk songwriters from Austin and San Antonio, respectively. The two met at Viva Big Bend in 2013, and now they join forces on occasion for performances and tours.

“It was probably going to happen anyway, but anything that happens out here is tinged in this dreamy feel,” Good recalls. Says Gilmore: “When I saw that Nicolette was playing out here, I thought, ‘We’re on a similar path now musically,’ and it’s great that it has led us more than once to this festival.”

Ramser, who draws on his connections and experience as publisher of Texas Music magazine to book the bands, says some of the performers bring their families and make a vacation out of the trip to Viva Big Bend. And many of them want to return the following year, something he tries to accommodate while also introducing new names.

“We want to throw a lot of stuff at people,” he says. “If someone walks away and they feel like they didn’t get to see and do everything, well, that’s great. We want them to come back next year.”