A Cornucopia of Country Charm and Wildflowers in Washington County 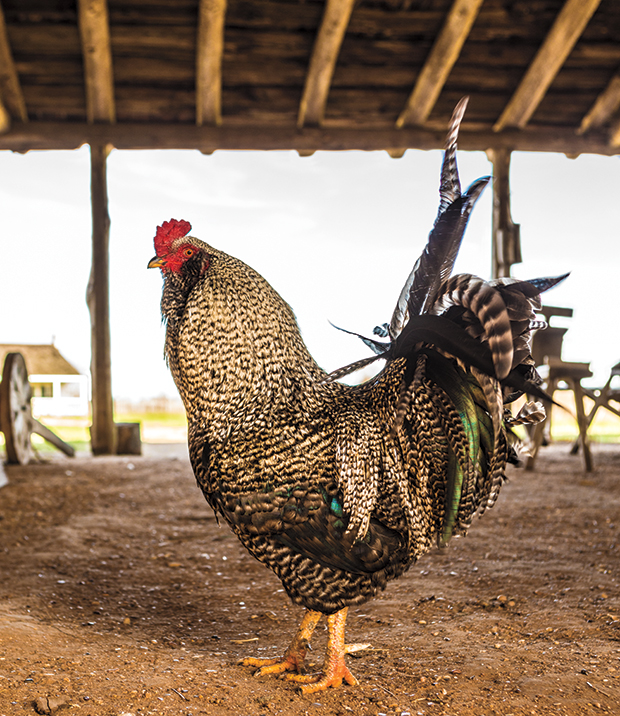 Rocky the barn rooster at Washington on the Brazos State Historic Site.

Donna Cummins steps out of the Chappell Hill fog and into my room at Southern Rose Ranch bearing a tray laden with rosemary cream-cheese scrambled eggs and pecan praline cobbler.

“The cows and chickens were really noisy. There must’ve been a predator in the pasture.”

Could’ve fooled me. Without car horns, emergency sirens, or other urban sounds, I felt swathed in silence and didn’t even notice the mooing and clucking.

That’s the bucolic beauty of Washington County, where the Blackland Prairie’s rolling hills are rich in Texas history, picturesque cattle and horse pastures, and fields of colorful wildflowers during springtime. I expected the rural flavor. What I didn’t expect was that Washington County would offer such a wide array of lodging, dining, and activities, from antiques shops to wineries, historical sites, and theaters.

Bed-and-breakfasts abound here, all with their own personalities. At the Southern Rose Ranch, the two guesthouse suites overlook a herd of belted Galloway cows. In Brenham, book one of the five lace-curtained rooms at Brenham House, and you’ll be staying on the foundation of an 1891 Lutheran Church blown away by the 1900 hurricane that devastated Galveston. The current two-story house rose in the 1920s, keeping the original limestone steps. Innkeepers James and Susan Lopez, former bakery owners, know how to compose a breakfast—bread pudding followed by fluffy scrambled eggs, juicy sausage, roasted potatoes, and a cherry tomato salad.

Also in Brenham, the 15-room Ant Street Inn furnishes each of its rooms with 19th-century antiques. The building started its life in the 1890s as a mercantile and feed store. One room even boasts an open-sided freight elevator. But don’t worry—it’s nonfunctional and you won’t plummet in the middle of the night.

For visitors interested in experiencing life on a working ranch, there’s Texas Ranch Life, an 1,800-acre operation on the border of Washington and Austin counties with quarter horses, Longhorn cattle, and bison. Guests can ride, rope, shoot skeet, throw tomahawks, or observe a cutting horse at work. Come evening, guests sip beers and take in the sunset while their steaks cook over an open fire. 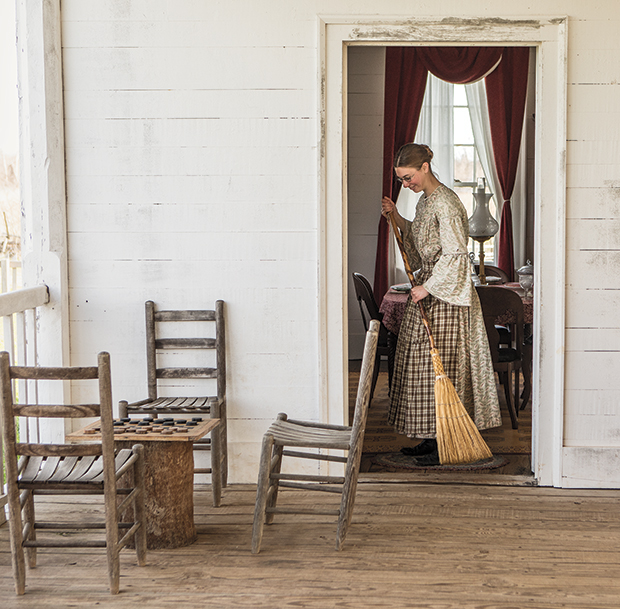 Aside from its ranches, Washington County’s pride lies in its history, including a claim to the title of “birthplace of Texas.” The town of Washington hosted the Convention of 1836, where Texian delegates adopted the Declaration of Independence from Mexico on March 2, 1836, and then wrote the Constitution of the Republic of Texas.

A replica of Independence Hall—the simple building where delegates convened—is a centerpiece of the 293-acre Washington on the Brazos State Historic Site. The original Independence Hall, which also served as a town hall, district court, school, dance hall, and storage building, burned down in 1850. Built on the original footprint, the replica stands true, complete with white oak walls, floor, and ceiling, along with open window frames. The hall’s windows were on order in March of 1836 and didn’t arrive in time to keep the mid-30s temperatures at bay. Framers of the Declaration put muslin curtains over them to keep out the rain and sleet. That’s what we see in the replica.

Shortly after Texas declared independence, the Mexican army overtook the Alamo in San Antonio, defeated Colonel J.W. Fannin’s troops at the Battle of Coleto, and then massacred Fannin and other surviving Texian fighters at Goliad. The war’s tide turned on April 21, 1836, when General Sam Houston led the Texas Army in a decisive victory at the Battle of San Jacinto. The battle, which lasted less than 20 minutes, secured Texas independence.

Also at Washington on the Brazos State Historic Site, Barrington Living History Farm interprets Brazos Valley farm life circa 1850. Anson Jones, a doctor and cotton farmer who served as the final president of the Republic of Texas before it joined the United States in 1845, lived with his family in the plantation’s four-room, dog-trot home for 13 years. Originally built four miles away, the home was moved to the historic site in 1936.

Visitors can tour the house’s downstairs rooms as well as other farm structures, including the slave quarters, barn, cotton cribs, hog pen, and smokehouse. Barrington’s interpretive rangers farm cotton the old-fashioned way, with ox, plow, and wagon. A noisy flock of guinea hens roams the lawn around the farmhouse, squawking mightily.

Near the farm sits the final element of Washington on the Brazos State Historic Site, the Star of the Republic Museum. Owned and operated by Brenham-based Blinn College, the museum chronicles life in Texas up to the statehood era with artifacts such as Bowie knives, cotton bales, Spanish spears, and French spittoons. A Texas Rangers exhibit displays the jacket that Chuck Norris wore in Walker, Texas Ranger as well as a picture of actor Clayton Moore, who played the Lone Ranger in the 1950s TV show. A Texas Mystique wall explores intrinsic elements of Texas such as the Alamo, the state’s Mexican heritage, Willie Nelson’s music, and the magical allure of barbecue.

Stairs to the upper level pass a timeline of Texas history and a 140-foot mural depicting the journey from the Sabine River to Washington in the mid-1850s. Upstairs, the museum displays pioneer artifacts like an 1850 pump organ with foot pedals and surgical instruments such as forceps.

Washington was a bustling hub of about 750 residents by the mid-1850s, home to shops and hotels. But when the railroad came through in 1859, Washington took a pass because it didn’t want to pay for a stop. So, the railroad went to Navasota and Brenham. Washington slowly declined, and only about a dozen people live in the unincorporated area now. 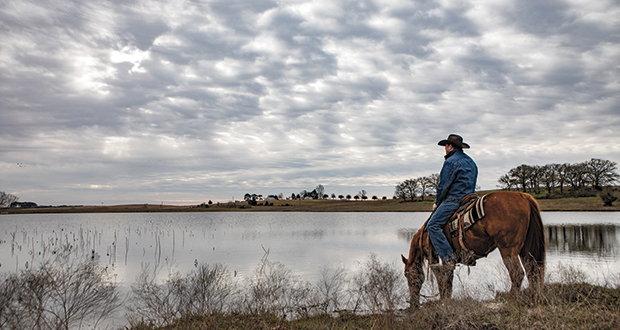 Brenham and Chappell Hill, though, have thrived and offer plenty for a rambling visitor to explore. At Chappell Hill Lavender Farm, 3,000 of the waist-high purple plants bloom in two seasons—May-June and August-September. Visitors can cut their own lavender when it’s ready to reap and drop by the gift shop for lavender ice cream, lavender-infused honey and chipotle sauce, and lavender soaps and lotions.

Along with lavender, you’ll find wineries dotting the Washington County countryside. In Chappell Hill, Texas Star Winery’s offerings include a popular Roussanne, a somewhat dry white with honey and apple tones, and the Sunset Red, an award-winning lightly dry red blend. In Brenham, Windy Winery’s hilltop outdoor tasting area catches a lovely breeze and makes a nice setting to sip one of its bestsellers, Cool Breeze, a dry white wine, or the spicy Independence, made from Lenoir grapes grown on its own estate.

When you’re ready to head to town, Brenham hosts a concentration of cafés, boutiques, and antiques shops in the turn-of-the-century square, anchored by a white marble courthouse built in the Art Moderne style. Trains still chug through town several times a day on the BNSF Railway.

I grab lunch at Funky Art Cafe, which lives up to its name with three white brick walls and a purple wall that bears the work of local artists. It’s all for sale. In a corner sits a Christmas-like tree decorated with American flags and sunflowers. The theme carries into the food at this lunch-only eatery. My whimsical Flenniken’s Creation salad mixes mandarin oranges with greens and blue cheese, with a lemon cookie on the side and a big scoop of chicken salad in the middle. Maple vinaigrette dressing ties the whole thing together.

Attached to the café is The Pomegranate, a gift shop with an eclectic array of goods ranging from colorful leather purses to cutting boards, fine china, and a wall of cookie cutters in shapes like lobsters, dachshunds, and guitars. Just a block away, I explore Today & Yesterday—one of the more than a dozen shops that make Brenham an antiques mecca—and marvel at the wrought-iron doors and transoms.

A few blocks away, at Park Street Bakery, I choose a piña colada kolache—the same treat that won the grand champion award at last September’s Kolache Festival in nearby Caldwell. The super-soft roll’s topping of cream cheese, coconut, and pineapple tickles my taste buds. 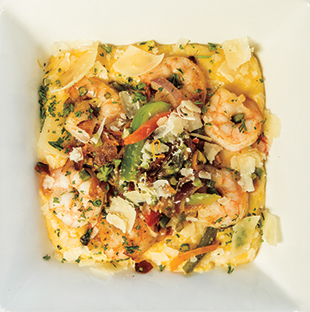 Shrimp and grits plate at 96 West in Brenham.

For dinner, the upscale 96 West, also located downtown, welcomes guests with an outdoor patio perfect for an evening glass of wine and a wood-paneled dining room with tall ceilings and an urban vibe. Favorites include the juicy steak from 44 Farms in nearby Cameron, tapas, and inventive flatbread. I love mine, which comes topped with prosciutto, blueberry chutney, arugula, and provolone, drizzled with a balsamic reduction.

It’s culture you’re after? Brenham’s got you covered. Set in a renovated warehouse, the 160-seat Unity Theatre stages professional productions featuring actors from across the region. Ken Ludwig’s Leading Ladies takes the stage in June, and the classic Sleeping Beauty arrives in July.

As part of the auditorium’s recent renovation, painters added a border of rose and pale blue tulips around the stage, precisely matching the original design. The theater’s renovation harks back to the original design, which paid, and continues to pay, homage to the flowering countryside of Washington County.