How one man's gumbo recipe evolved over time 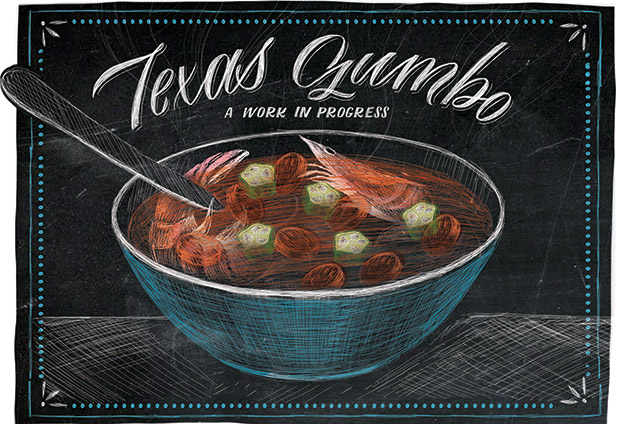 After cooking gumbo for 30 years, I’ve developed some rituals when it comes to tailoring my recipe to the seasons. In the cold part of the year, I make oyster gumbo, because that’s when oysters are in season in Texas (typically November through April). In the hot weather, blue crabs are plentiful, and so I make summer gumbo with crabs. Of course, the main ingredient in any season is shrimp.

I was living in Austin in the late 1980s when I first learned to cook gumbo from the recipe titled “Cajun Seafood Gumbo” in the 1984 masterpiece Paul Prudhomme’s Louisiana Kitchen. The recipe called for fresh, never-been-frozen, heads-on shrimp, and authentic Cajun andouille sausage, a coarse-ground sausage usually made with pork. Neither was available at the supermarket at the time.

So I started looking for fresh, heads-on shrimp around Mustang Island, where we often went for beach vacations. A large shrimp fleet called the waters around Port Aransas and Fulton home, so it wasn’t hard to find a steady supply. These days, for shrimp, crabmeat, and oysters I rely on such stellar fishmongers as Alby’s Seafood, which is just a few blocks from the Fulton harbor.

Finding andouille sausage was another matter. Sometimes, through extraordinary effort, I obtained the real deal. And yes, the dense, spicy sausage tastes great in gumbo. But after a while, I departed from Paul Prudhomme’s Cajun orthodoxy and substituted Texas barbecue links.

US 183, my favorite route from Austin to the coast, goes right through the barbecue-rich town of Lockhart, which was declared the “Barbecue Capital of Texas” by the Texas Legislature in 1999. Kreuz Market, a classic Texas barbecue joint with giant brick pits, and Smitty’s, a storied meat market and restaurant on the town square, both sell excellent link sausage. After awhile, I came to prefer Texas smoked links over Louisiana andouille in my gumbo.

After all, how can you top a culinary experience that combines Central Texas barbecue and Gulf Coast gumbo?

When I moved to Houston in 2000, my recipe changed. My brother Dave lives near Aransas Pass and has a fishing boat, so I still traveled to the Corpus Christi area for beach vacations. At first, I got my sausage at Mustang Creek Bar-B-Q in a little town near the coast called Louise.

But the pitmaster there, Cecil Sanchez, told me he bought the sausage at Prasek’s Hillje Smokehouse, just up the road in El Campo. If you have never visited Prasek’s Hillje Smokehouse, I can’t recommend the experience highly enough; it is one of those uniquely Texan highway attractions that begs for both photos and repeat visits. The cavernous building resembles a giant hunting lodge and also contains a convenience store, bakery (with great kolaches), restaurant, and ice cream parlor. A favorite of hunters and sportsmen, Prasek’s has so many antlers hanging from the rafters that you might mistake it for a taxidermy warehouse.

The first time I went in to buy some sausage for gumbo, I just stood there gobsmacked in front of the sausage case. At Prasek’s, you’ll find more varieties of Czech sausage than you have likely ever seen in one place, including pork, beef, pork-and-beef, bison-and-pork, venison, turkey, and chicken links.

After some recipe testing, I settled on the combination of seafood from Alby’s and pork-and-beef sausage from Prasek’s on my Houston-to-Mustang Island gumbo route.

When we moved to Galveston Island last spring, my gumbo recipe changed again. I drew inspiration from the version served at Little Daddy’s Gumbo Bar, where they finish the gumbo one order at a time in the same sort of steam kettle that’s used to make oyster pan roasts and oyster stew at the Grand Central Oyster Bar in New York. I like the idea of making a gumbo base with seafood stock and roux, and then poaching seafood in it just before its time to eat. That way the seafood is never overcooked.

I make my seafood gumbo more often than ever before now that I live at the beach. My favorite fishmonger is called Katie’s Seafood Market. Located on the waterfront at Pier 19, the building has a garage door that opens to the street in front and a big door that opens to a dock in the back where fishing boats pull up and unload while you shop. You can literally get fish fresh off the boat—and say “hi” to the captain while you’re at it.

And as for the sausage—the route from Galveston to my mom’s house in Georgetown takes me right by the new Bastrop branch of Southside Market and Barbeque. It’s an upscale satellite location of the original Southside Market in Elgin, with ceramic plates and real glasses, but the restaurant sells the same famous links—known as “hot guts”—as Southside Market’s original meat market location.

Highly seasoned beef links in a natural pork casing, Elgin “hot guts” are considered by many to be the classic Texas barbecue sausage. The latest version of my Texas gumbo, made with shrimp from Katie’s Seafood Market and Elgin sausage from Southside Market, has been well received by friends and family. But I suspect I will forever be tweaking the recipe.