From Peach Stand to Food Company to Cooking School: Inside Das Peach Haus

At this restaurant, visitors leave with preserves, improved cooking skills and a few bad jokes courtesy of Chef John DeMers. 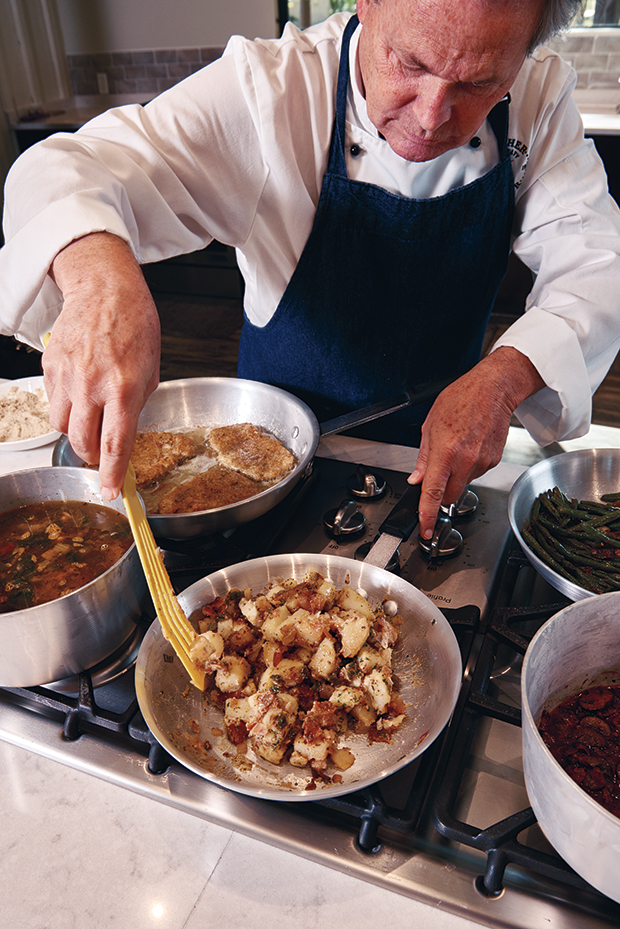 Inside Das Peach Haus’ weathered wooden storefront off US 87 in Fredericksburg, the shelves lining the store’s perimeter overflow with dozens of brightly colored jars of salsas, jams, and jellies. Overhead, old-fashioned roadside signs advertising fresh produce decorate the walls from floor to rafters.

Salt and pepper to taste

1. Preheat the oven to 350 degrees. In a bowl, beat the eggs with the green onion, parsley, and red pepper. Lightly season with about half the seasoning blend, plus salt and pepper. Pour the eggs into a lightly oiled 9×16-inch ovenproof baking dish and place on the middle rack of the oven until top is set, about 10 to 12 minutes. Remove from the oven.

2. Meanwhile, cook the beef with about half the onion in a skillet; drain fat. Stir in the water and remaining seasoning blend. Add the salsas and pasilla sauce. Simmer for about 10 minutes.

3. Spread beef mixture over the top of the egg frittata, followed by the remaining onion and the Fritos. Top with the cheese and return to the oven until cheese melts and is golden brown on top. Serve warm, topped with chopped tomato. Serves 8.

The “sampling hub” of the food company Fischer & Wieser, which started in 1969 as a humble peach stand, Das Peach Haus has recently expanded its offerings with the new Fischer & Wieser’s Culinary Adventure Cooking School. The classes began in September with themes such as Hill Country German Cuisine, Tuscan Feast, and Sunday Brunch. I’m here with a small group to learn how to make traditional German jägerschnitzel. We’re gathering at the new instruction kitchen, which includes demonstration and cooking space for students, as well as several large tables for prep work, three ovens, and four cooktops. A door opens out to a deck with views of Fischer & Wieser’s peach orchard and a small lake.

Wearing a white chef’s coat, instructor John DeMers greets our group with a glass of wine. “There are 40 wineries within a grape’s throw of this spot,” DeMers says. So we start with a glass of viognier from nearby Hilmy Cellars, even if it does feel a bit indulgent at 10 a.m.

DeMers seasons his cooking classes with tales of his adventures and the history of Fischer & Wieser. He believes that the students who take the classes want to have a good time, in addition to adding a few new recipes to their repertoire. “When you feed people, something happens,” he says. “It doesn’t matter what you cook, it only matters that you cook.”

DeMers grew up in New Orleans watching his parents cook together. When he was 16, though, his mother died, and he began preparing the family meals. “It was not a choice,” he says. “When my mom died, my father completely lost interest in ever making dinner again.”

DeMers later traveled across Europe as a freelance writer, and his frugal budget led him to street food and other inexpensive meals. “I realized that the best food was the peasant food,” he says. “I started to realize that food tells the story of who we are. I’m a storyteller even more than a cook.”

Over the course of his career as a journalist, DeMers has written more than 50 books, including a chef-focused mystery series that takes place in Texas. As most of his books are cooking-related, he continued to connect with the concept of telling stories through the lens of food. That mission led him to Fischer & Wieser, where he now serves as the company’s first director of culinary hospitality.

In class, we turn our attention to the aroma of caramelizing onions, bacon, and mushrooms, which form the base of our gravy for DeMers’ jägerschnitzel recipe. As we gather around the table, he demonstrates his simple process of dredging pork loin in seasoned flour, dipping it in an egg wash, then coating it with bread crumbs before pan-frying.

In the 1990s, DeMers wrote a magazine story about the late New Orleans chef Paul Prudhomme, and in the years following came to consider him a mentor. DeMers often quotes Prudhomme in class; for example: “When in doubt, season everything,” he says. Then, adding some wine to the simmering sauce, he jokes, “If a half-cup is good, a whole cup is better.”

Some classes are more demonstration-style, where DeMers has prepped most of the ingredients beforehand and assembles the dishes while students sip wines from nearby vineyards like Pedernales Cellars and William Chris Vineyards. Other classes are designed to be more hands-on, “where students get to chop and stir, and I’m giving advice and telling bad jokes,” he says.

The recipes occasionally use Fischer & Wieser ingredients, but not always. When DeMers does use a prepared sauce or ingredient, he does so because “it’s quicker and it’s important to achieve layered flavors.”

Employees of Fischer & Wieser’s research and development team take their cues from consumers, so in the early 1990s, when people reported they had started using fruit jams in their home recipes, the company developed new sauces to meet that demand. The famous raspberry chipotle sauce, which is practically a Texas party standard when served with a block of cream cheese, was born in the mid-1990s when chipotle peppers were not yet well-known in most culinary circles. “It’s still our biggest seller in all 50 states,” DeMers says.

That spirit of inventiveness inspires DeMers, too, as he experiments with new twists on familiar recipes. His Frito Pie Frittata combines the Tex-Mex favorite with an Italian-style egg dish, layering eggs, seasoned ground beef, and Fritos. “And because it’s Texas, we cover it with cheese and throw it in the oven,” he says.