Exploring the roots of barbecue mythology 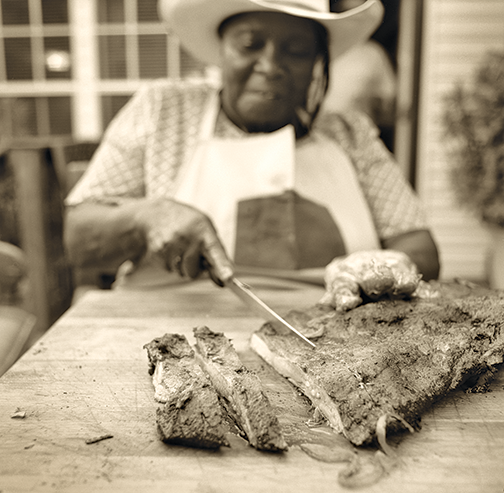 We weren’t looking for just any barbecue restaurants. We had no interest in places that used electric or gas-fired barbecue ovens. We were looking for the keepers of the flame—the last of the old-fashioned Southern barbecue pits,” explains Texas food writer Robb Walsh in the preface of his new book Barbecue Crossroads: Notes and Recipes from a Southern Odyssey.

We couldn’t help but be intrigued by Robb’s mission. Texas popular culture has bestowed a mythical quality upon mouth-watering barbecue and its purveyors. In his book, Robb digs into this treasured culinary tradition and scours the barbecue joints of Texas and the southern United States to examine barbecue’s history and changing culture. His findings are enlightening—and they’ll make you want to search out some ’cue for yourself.

This quest started when I left my job at the Houston Press after ten years of restaurant reviewing. I found myself enjoying barbecue more than I had in decades. Liberated from my role as critic and otherwise unemployed, I had the luxury to just sit back and take it all in. And without the strictures of anonymity, or anything better to do, I could banter to my heart’s content with the folks who tended the pits.

And I could see the folly of much of what I had written. Barbecue Top 10 lists, ratings, and all the rest of it are, as the Buddhists would say, illusion. Bloggers, journalists, and magazine editors put scores on barbecue joints in order to convince the public (and ourselves) that we are the masters of the barbecue universe. But it’s all a lot of smoke.

When you get caught up in arguing about who serves the best barbecue, you lose sight of the larger picture. Some days the sausage at Smitty’s in the Central Texas town of Lockhart is so wet it squirts when you cut it, and sometimes in the late afternoon it gets dry. So what? You want to give the sausage a score? Go ahead if it makes you happy. The sausage has been smoked the same way for over a hundred years. It will still be here after we are gone.

There is no best barbecue, any more than there is a best song or a best painting. In the part of the country where barbecue has long been part of everyday life, as soon as you forget about the scorekeeping, you become open to the wider experience of BBQ as an art form, a spiritual pursuit, and a culture. I realized that in twenty years of food writing, I had never actually written what I wanted to say about barbecue. So I teamed up with photographer O. Rufus Lovett. The idea was to take another approach to barbecue. We didn’t go looking for the best barbecue—we went looking for the wellsprings of barbecue mythology.

What we found was the routine of the pitmasters; the sharpening of knives, the cutting of meat, the chopping of hardwood, the tending of coals, and the opening and closing of black iron pit doors. In these daily rituals, we saw an older way of relating to food. The sliced brisket, pulled pork sandwiches, and tender ribs were delicious. But it was the ancient artisanal tradition itself and the culture and mythology that surround it that we were determined to document. 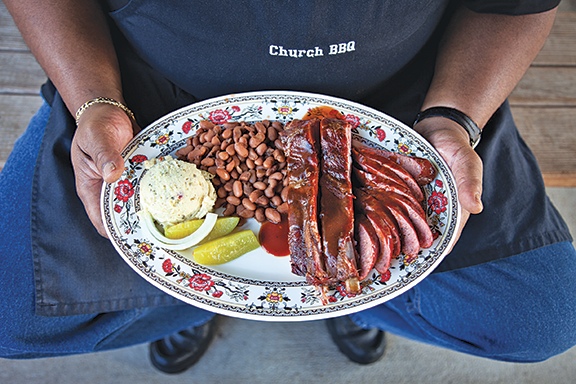 Rufus and I introduced ourselves to Jeremiah “Baby J” McKenzie, the proprietor and pitmaster of Baby J’s Bar-B-Que & Fish, in Palestine. But our trip got off to a strange start when he told us, “We’re out of brisket, pork, and ribs. All we got is fried catfish.”

Baby J’s had been written up in a Dallas newspaper over the weekend, and the meat had sold out. Baby J’s started out at a small location in Elkhart and moved to its current site on the edge of Palestine a few years ago. The restaurant building is located on a vacant lot under a water tower on the unpopulated outskirts of town. Its only neighbor, besides the giant steel ball full of water, is a fireworks stand.

Baby J spoke quietly, and his words conveyed a sense of wonder. I was surprised to discover that Baby J recently celebrated his tenth year as pastor at the One Way Apostolic Church of Palestine.

“I started cooking for our church suppers. Everybody at the church loved my barbecue, and they kept saying, ‘You should open a restaurant.’ So I did,” he said.

He climbed the stairs to enter an enclosed trailer and invited me to join him. Baby J opened the steel door of the rig and cut off a few slivers of the brisket that was cooking so I could taste his spicy seasoning.

“People in town said I would never last because I made my meat too spicy,” Reverend Baby J told me. “I guess they were wrong. My barbecue place started showing up in newspapers and magazines and my business took off.” Baby J was convinced that the good ink flowed down from heaven. “There are a lot of barbecue joints out there, and to be singled out like that is a blessing from God,” he said.

There’s a big difference between African-American barbecue in East Texas and meat-market barbecue in Central Texas. East Texas brisket is not a fanned array of picture-perfect slices. It’s a falling-apart mess of hot and greasy meat, aggressively seasoned with peppery barbecue sauce. In East Texas, cheap and plentiful beef was substituted for pork, but the “chopped sandwich” barbecue style remained the same. In Central Texas, German butchers adapted Southern barbecue to their traditions of sausage making and Old World enclosed smokers. 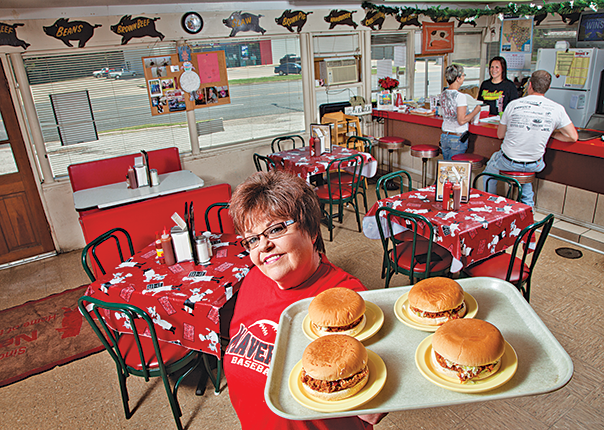 The Southern tradition of eating at stores and markets came from the migrant farmworkers. For a hundred years, from the end of the Civil War to the mid-1960s, cotton was picked by hired hands. Hundreds of thousands of pickers were required. They moved from south to north, following the ripening of the cotton. There were often more cotton pickers than local residents for the several weeks it took to bring in a crop. Regardless of whether they were African Americans, Mexican nationals, or poor whites, cotton pickers were at the bottom of the social scale. They weren’t welcome in restaurants or cafes where townspeople ate.

Cotton pickers bought their food in gas stations, convenience stores, and meat markets. In Lockhart, cotton pickers were dropped off after work in the parking lot of a meat market now named Smitty’s, and formerly known as Kreuz Market. The front door of the retail meat market is on the town’s main square. The parking lot and back door are located across the street from the cotton gins and railroad tracks. Migrant workers came in the back door and either got their smoked meats to go or ate them at picnic tables in the back of the market. The same scenario was repeated in other meat markets run by European immigrants.

In the days before refrigeration, butchers followed the traditions of eastern Europe, grinding their scraps into sausage and smoking them along with unsold meats. They probably had no idea what the cotton pickers were talking about when they called the smoked sausage and pork “barbecue.” But the butchers knew that when the cotton pickers were in town, they sold a lot of it. Soon enough, the eastern European immigrants were calling it barbecue, too. 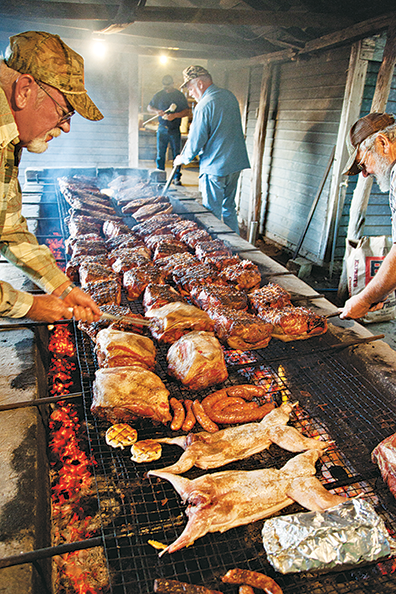 Those of us who value tradition have been mourning the disappearance of wood-fired pits from barbecue restaurants and complaining about the extremes of the cook-off circuit, but we have mostly overlooked the events where American barbecue culture has been best preserved.

The barbecue pit was covered with cardboard. It was three courses of cinder block above ground level and ten cinder blocks long, which would make it two feet high and fifteen feet long. The opening looked to be around four feet across. On top of the cinder-block chamber, a grate made of metal rods with stout wire mesh attached spanned the opening. The mesh area was only three feet across so that there was a gap between the edge of the cinder block and the cooking area. This allowed the fire underneath to be refueled. When the cardboard was pulled back to reveal the meat, I counted fourteen briskets and around thirty Boston butts. Three men mopped the meats with small cotton dish mops dunked in a big pot of mop sauce. Lumps of B&B hardwood charcoal were added to the fire.

After visiting the Sons of Hermann lodge in Washington, I wondered how many community barbecues there must have been in the 1950s, when organizations like the Kiwanis, Lions, Elks, Rotary, and Optimists were at their peak and churches were still holding camp meetings regularly. Once upon a time, before television and the Internet, those groups were our “social network.”

Although community organizations are shrinking, many of the old barbecues are still going on. They aren’t conveniently located in restaurants, and they aren’t open seven days a week. The service is terrible—you have to stand in line. But give one of these events a try. Pretty soon, you’ll find yourself slowing down and getting caught up in a conversation. When you sit at a common table and share your enthusiasm for great smoked meat, tangy sauce, or juicy sausage with the people you meet, you become a part of a community of barbecue lovers.

And that’s what American barbecue culture is really all about.