Written by Art Williams, Photographs by Steven David | From the May 2015 issue | Updated: October 28, 2018 | Filed Under: Cuisine Confidential 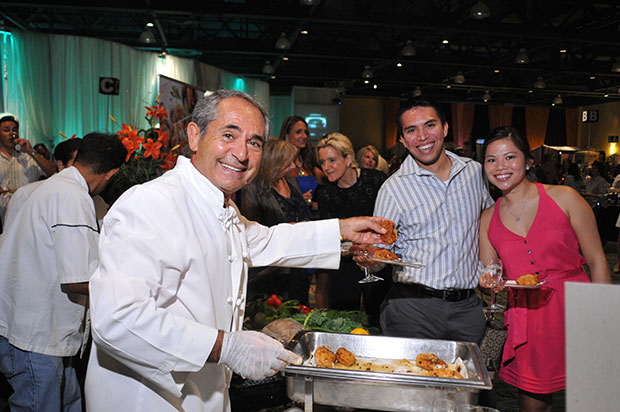 Lori Moffatt speaks with restaurateur Carmelo Mauro, whose Carmelo’s restaurant in the capital city dates to 1985, about his career path, life in Texas, and what inspired him to bring an accordionist into the fold.

In the past decade or so, Austin’s restaurant scene has morphed from one rooted in Tex-Mex and comfort food to a culinary landscape rich in options from around the world. It’s exciting indeed to choose a Thai food truck for lunch, a modern Italian diner with craft cocktails for dinner, and a French-inspired outdoor patio for dessert and a post-prandial pétanque game—and then (should you wish) to explore something new the next day. And the next. And the next.

But sometimes it’s great to duck the trends and go old-school, and in Austin, restaurants that have stood the test of decades are few and far between. So when I recently had the opportunity to enjoy a fabulous dinner at Carmelo’s, which paired a full-course Italian spread with corresponding Italian wines, I realized I hadn’t been there in decades. I couldn’t help but marvel how rare it is for a restaurant to thrive unchanged for all these years.

Mentioned in this story:

Though Carmelo’s now offers vegetarian and gluten-free options, most of the menu focuses on classics such as steak Diane, fettuccine carbonara, escargot baked in garlic butter, and meat lasagna with béchamel sauce. The décor—with heavy wooden chairs, white tablecloths, full place settings, and opulent chandeliers—somehow suits the restaurant’s setting in Austin’s ivy-covered, limestone 1871-72 Old Depot Hotel on East 5th street. When Carmelo’s opened here in 1985, downtown Austin was in many respects a sleepy business-and-government center; today the ivy-covered building lies in the shadow of high-rise condominiums and hotels in one of America’s most rapidly growing cities.

After the Austin dinner, I spoke with Sicilian chef and owner Carmelo Mauro about his career path, life in Texas, and what inspired him to bring an accordionist into the fold.

TH: How did you start your career in the restaurant business?

Carmelo Mauro: It was back in 1963. I had completed my education in the hospitality field in Italy, and I decided to pack my bags and start my travels. I had always dreamed of coming to America, but I traveled around first. I worked in Germany, England, Bermuda, Belgium, Switzerland. Eventually I was working in the Cayman Islands, where I met people from Houston. Texas intrigued me. I met my wife Hilary in the Cayman Islands. Tourists come and they go, but Hilary came back. We married and had a child, and came to Texas with a three-year-old baby girl.

TH: Did you always dream of being a restaurateur?

Carmelo Mauro: When you’re young, you dream of so many things. My dream was essentially to see the world, to be Marco Polo. The hospitality industry gave me that opportunity, and I am fortunate that I loved it as soon as I entered it.

TH: I understand that you opened the first Carmelo’s in Houston in 1979, then the Austin location in 1985. And both have accordion players on staff, who have been with you for many, many years. That’s very unusual! How did that idea come about?

Carmelo Mauro: I always say that without live music, a restaurant is not Italian. The idea was to create the feel of a small village. The accordion is a traditional instrument in Sicily; it seems there is always a strolling musician. No matter where you go, you will hear the sounds of accordions. It’s amazing that such beautiful notes come out of a little box.

TH: Do you find that tastes in Austin are different than tastes in Houston?

Carmelo Mauro: Of course many things are similar, but yes, just yesterday we were discussing that even though the towns are only 150 miles apart, the tastes are different. Our Houston restaurant sees more business clients, while in Austin, the crowd is often younger. For example, we have a dish of pork wrapped in pancetta with gorgonzola sauce that is delicious, but it doesn’t do very well in Austin. Another example of a dish that does well in Houston but not Austin: Leg of duck over risotto, with orange zest, pine nuts, and raisins. Our Austin diners order lighter. It’s interesting and difficult to figure out.

TH: It seems that your menu focuses on foods of Sicily, but Italy as a whole is well-represented, right?

Carmelo Mauro: Yes. For example, we have veal, which is common in the northern parts of Italy, and of course plenty of seafood from the southern parts. But try to incorporate influences from all the places I have traveled in the world. People enjoy tasting different wines and new dishes. 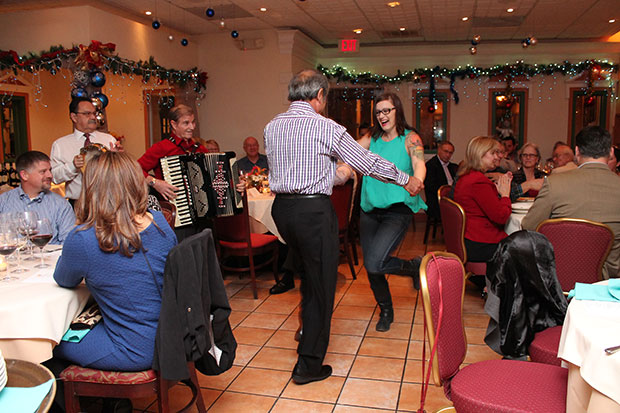 Carmelo Mauro dancing with a customer.

TH: To me, that’s part of the fun of cooking, and eating.

Carmelo Mauro: Yes. Food can take you to every country, to every culture. Food, spices, wine, travel, they all influence you to be a better person.

TH: That’s a great segue to my next question. Where do you like to eat when you are in Houston or Austin?

Carmelo Mauro: I live in Houston, so when I’m in Austin, I confess I eat at my own restaurant. In Houston, I love the Mockingbird Bistro. When I go there, I don’t look at the menu, though. I ask the chef to surprise us. When you’re in a business where you make a decision every moment, when I go out I don’t want to make decisions. I let surprises come. Always beautiful surprises.

TH: When you and Hilary have time to travel, and you’re not in Europe, do you see much of Texas?

Carmelo Mauro: Texas is so beautiful, but there is still so much we have yet to see. We like Austin, Fredericksburg, Dallas. The dining scene in Dallas is spectacular. And San Antonio—what a beautiful spot. But our goal is to visit some of the national parks. We want to see Big Bend National Park and Guadalupe Mountains National Park.

TH: Since you opened Carmelo’s in Austin in 1985, the city has changed dramatically. Are you still a fan?

Carmelo Mauro: Austin is vibrant. We have seen Austin change, and Austin keeps on changing, but the future is about changes. If we try to stop change, what is the future?