Head South to Indulge in the Valley’s Signature Summer Treat 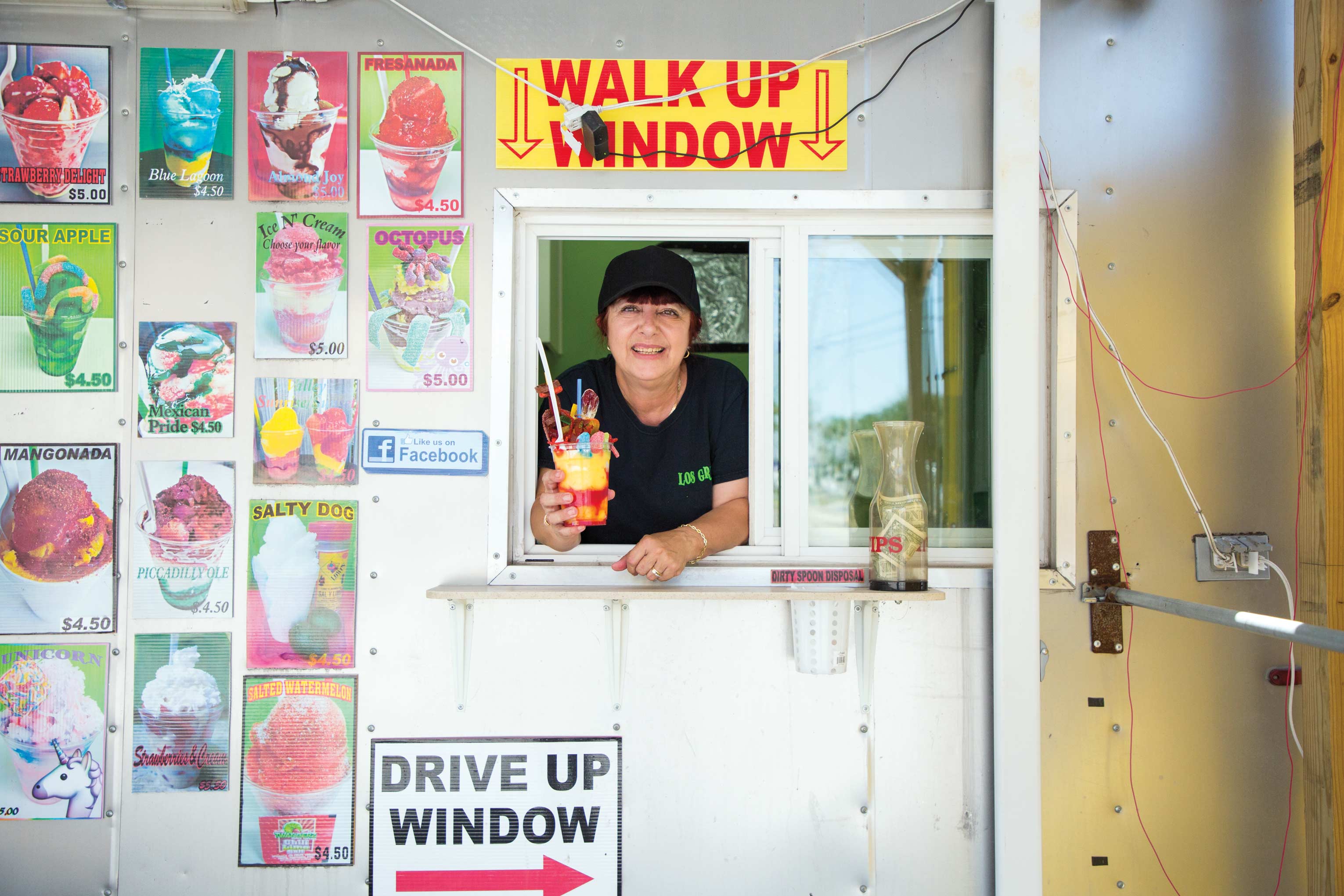 The Raspas Dictionary
A handy guide to the terms you need to know when ordering the cold treat.

The surest sign that summer has arrived in the Rio Grande Valley is the line at the raspa stand stretching around the block. While the shaved-ice concoctions have caught on in cities across Texas, the Valley remains the undisputed mecca. At roadside stands in every city and town—no matter how small—you can find flavors that range from classic mango and creamy tres leches to extreme, Instagram-worthy delicacies topped with gummy bears, Oreos, Kool-Aid powder, or even pickles.

Raspa is short for hielo raspado, or shaved ice. In Mexico, raspados are traditionally sold by roving vendors with pushcarts who shear the ice with a hand-held tool and then slather it with homemade syrup. The same principle applies in the Valley, except here purveyors use a special machine to shred the ice and offer such an array of flavors and designs that raspa-making has evolved into an art form.

“Raspas are a luxury, not a necessity,” says Eddie Margo, co-owner of Margo’s Corner in Weslaco, which has been in operation since 1984. “But if we run out of our special flavors, people will freak out.”

In total, Margo’s offers more than 60 combinations, all made with homemade syrups, and divided into milk-based varieties made with sweetened condensed milk and fruit-based versions made from blending and then straining fruit, sugar, and water. In addition to basic snow cones, customers can choose from dozens of specialty items, some featuring ice cream, candies, or chile powder. One best-seller is the mangonada, a layered treat of mango raspa, gummy bears, sliced mango, chile, and a plastic straw coated with spicy tamarind candy.

On the other side of Weslaco, Viva La Raspa is hard to miss: Owner Jennifer Calvo commissioned a local artist to cover the entire stand with colorful Mexican-blanket-inspired murals that touch on both Aztec mythology and Mexican-American popular culture. A preschool teacher by day, Calvo started the stand because she and her husband kept noticing the long lines elsewhere. “We were always getting raspas,” she says. “So, we thought, why not start our own stand?”

One best-seller at Viva La Raspa is the picadilly, a fruit raspa topped with diced dill pickles, chile, and Kool-Aid powder. “You wouldn’t think that adding pickles or Kool-Aid to something sweet would make it good, but it does,” Calvo says. “The sweet and sour really do work together.”

Customers also come for the chamoy, a popular syrup that varies among stands. “We use dried apricots and berries, and then boil it with spices, chile, and citrus,” Calvo says. “It takes a long time to make, but it’s worth it.” 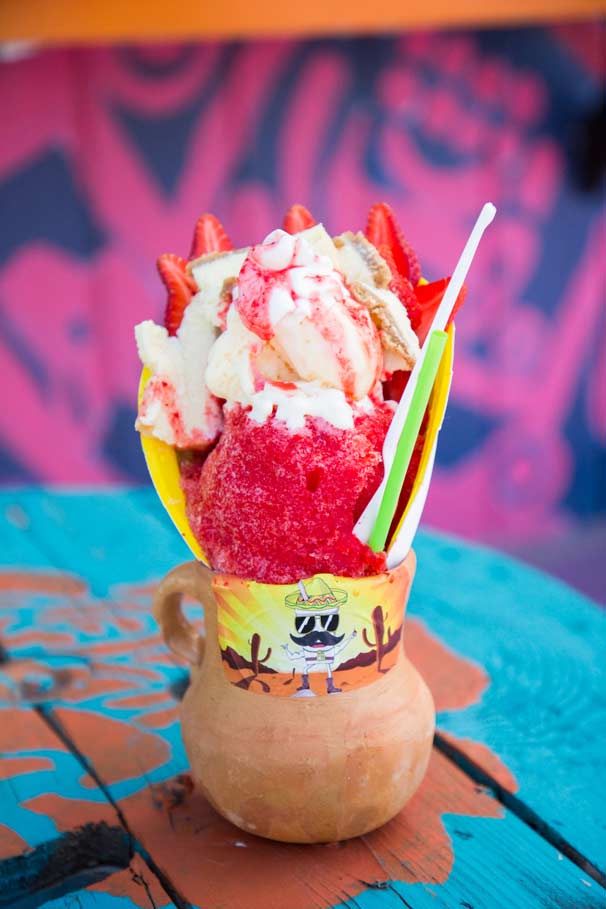 Raspas, like this strawberry cheesecake concoction from Viva La Raspa in Weslaco, can resemble edible works of art.

Both Margo and Calvo are lifelong Valley residents who grew up immersed in raspa tradition. But the co-owner of Los Gringos, which has locations in both Weslaco and Pharr, didn’t discover raspas until later in adulthood. A native of Germany, Gabriele Rendon moved to Texas when she married an American soldier. She first tasted raspas at a Hill Country festival. For Rendon, the fruit and milk flavors were immediately appealing, but the sour and spicy varieties were a more acquired taste. “Where I’m from, we put caramel syrup, chocolate syrup, strawberries, cream—sweet stuff,” she says.

Los Gringos’ raspas differ from other shops because it uses raw fruit blended with shaved ice for a base, rather than ice and syrup. “You take your fruit like mango or strawberry, put it in the blender and puree it, and then it’s flash frozen,” Rendon explains. The result is packed with fruit flavor and doesn’t melt as quickly as a traditional raspa.

Although the base may be different, Los Gringos offers many variations based on Valley classics. One of the most popular is the mangonada deluxe, which features green chamoy made from pickles in lieu of dried fruit. “This is for everybody who likes it really, really sour,” she says.

Rendon also encourages customers to come up with their own flavor combinations; some of them, like a mangonada topped with Flamin’ Hot Cheetos, eventually find their way onto the permanent menu. “We encourage our customers to be creative,” Rendon says. “If somebody comes up and says, ‘This might sound crazy, but—’, I say, ‘We can build it.’”

ICED CUBE, a stand in the small town of Elsa, is also known for creative inventions. Although it opened just last summer, ICED CUBE has already gained fame among raspa connoisseurs who travel from as far away as San Antonio and Corpus Christi to sample its over-the-top yet elegant creations. 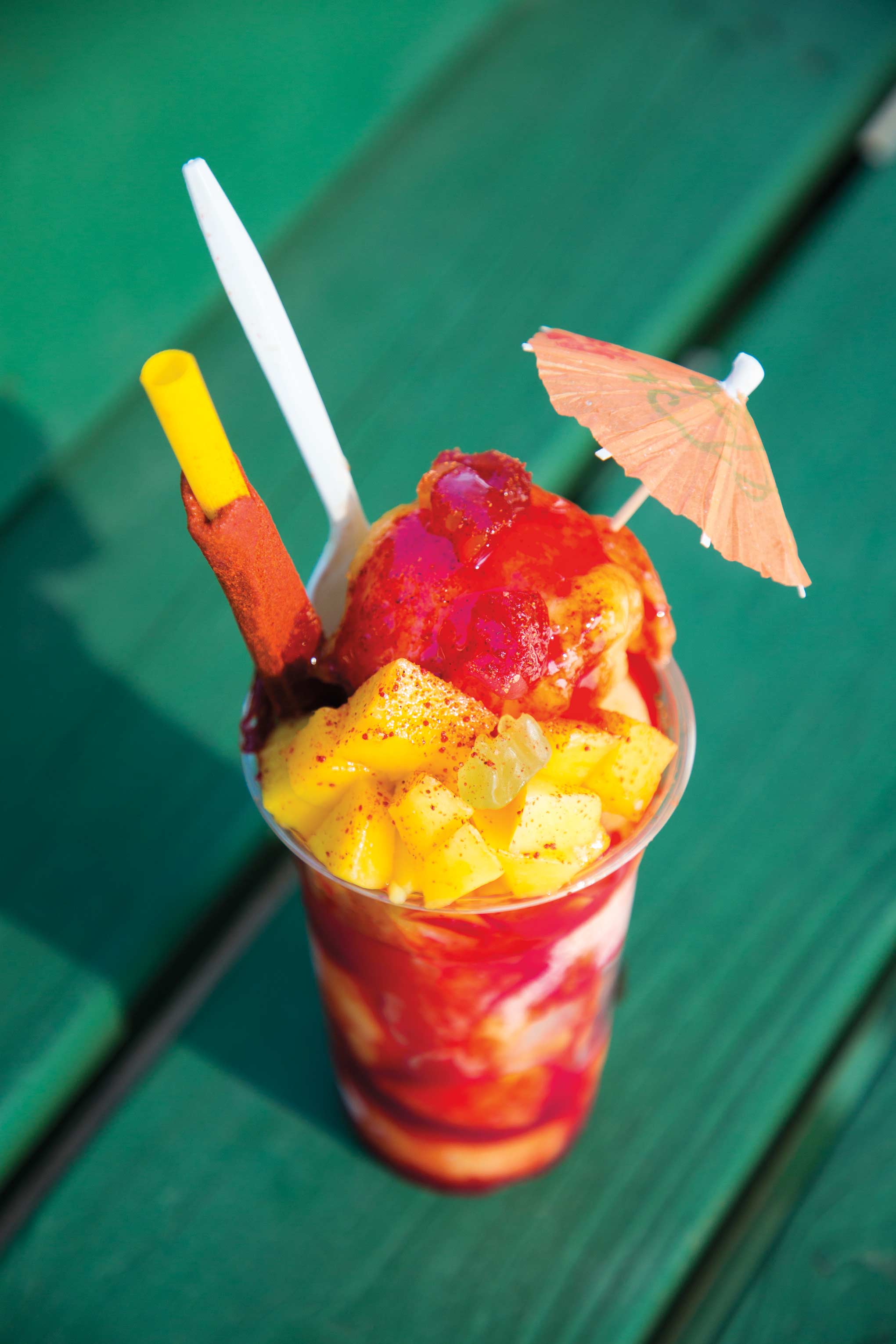 The mangonada at Margo’s Corner

“Our motto is, ‘If I wouldn’t take a picture for Instagram, we don’t make it right,” says Ashley Vasquez, who owns the stand with her husband, Johnathan Segura. Many items riff on pop culture, such as the Selena-inspired “Como La Flor,” which comes in the shape of a flower, with intricate petals composed of sliced strawberries, mangos, and pickles.

At ICED CUBE, customers scroll through Facebook, Twitter, or Instagram to check out the stand’s growing raspa catalog or consult the menu to build their own creation, and old-fashioned carhops move from car to car taking orders. During peak hours on summer nights, cars can be backed up 30 or 40 deep. “It’s an experience,” Vasquez says. “People come prepared—they watch their Netflix or bring a blanket to sit on while they wait.”

Whether you prefer titanic and trendy or simple and classic, a raspa is the perfect summertime refreshment. “Every person has their own genre of raspa,” says Margo, a second-generation vendor who spent much of his childhood at his parents’ stand on the street corner in front of their house. “Here in the Valley, where it’s so hot, we gotta have them. It wouldn’t be summer without them.”

A handy guide to the terms you need to know when ordering the cold treat.

Mangonada
Raspa with sliced mangos, chile, and chamoy, sometimes topped with candies such as gummy bears or Sour Rip Rolls

Natural
Raspa with syrup made from real fruit and sugar, as opposed to artificial flavors