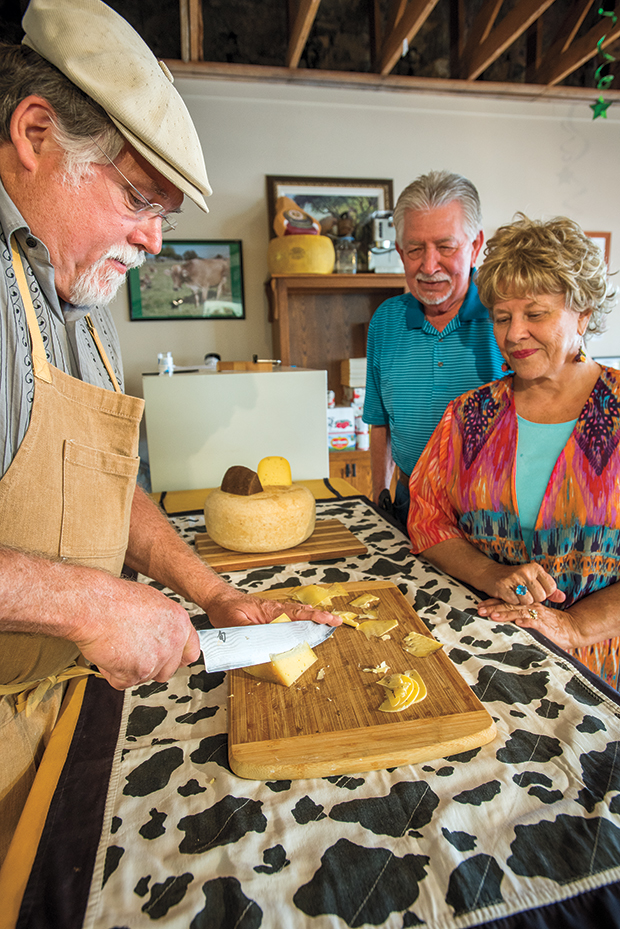 At his shop in Lipan, Dave Eagle creates Texas version of cheeses from around the world.

In a stainless steel vat in the back of a cheese shop in Lipan, I use a large paddle to swirl enzymes into 30 gallons of fresh milk from a local dairy. The milk’s destiny is to become a wheel of rich, creamy cheese, and I’m here at Eagle Mountain Farmhouse Cheese Co. with owner Dave Eagle, who’s giving me a condensed version of the three-day classes he offers every spring and fall.

Pour two gallons whole milk into a three-gallon pot on your stovetop and turn the heat to high. Use a stainless-steel spoon to lightly stir, dragging spoon on the bottom of the pan.

When you reach the foam stage (about 140 degrees), the proteins and fats should begin floating to the top; sticking on the bottom is less likely to occur.

As you approach 190 degrees, curds will begin to form. When this happens, turn off the heat and let the pan sit for a few minutes. Then you can scoop the curds into a colander to drain excess liquid. You should have a nice, moist ricotta.

Dave and I are working in a large room with two vats, industrial sinks, and a traditional wooden Dutch-style cheese press, which uses levers and weights to force whey from the cheese curd. Windows opening into the store’s merchandise area allow customers to observe the cheesemaking process every Monday and Thursday. During my visit, I watch Dave and his small team, including his son Matt Eagle and employee Shelly Dickerson, do everything from stirring milk to straining whey, washing rinds, and pressing, slicing, and wrapping the resulting products—cheese so flavorful I’ll have a hard time going back to the supermarket variety.

I tighten the apron strings around my waist, grab a thermometer, and get to work. Even the fanciest cheeses in the world start out with two basic ingredients: milk and salt.

Dave spends a lot of time thinking about the cows that produce that milk. Twice a week, he drives 65 miles northeast to Mike and Debbie Moyers’ Sandy Creek Farm in Bridgeport, where a herd of Brown Swiss cows—whose milk is high in butterfat, creating an especially rich cheese—spend their days grazing on grass. Dave will haul back 350 to 375 gallons of their milk to make his cheese.

“Cows—you know how they usually skitter and run away from you? Not these cows,” says Dave, holding up a framed picture of some of the Moyers’ cattle, their silky mocha-colored hides shining in the sun.

Dave met Mike in 2009, after leaving his former life as an attorney and taking a cheesemaking class in Vermont. Intrigued and inspired by what he learned, he was thinking about making cheese himself and started researching local dairies that could supply milk.

“Mike told me, ‘You come up and I’ll give you 5 gallons of milk, and you make you some cheese,’” Dave says. “He loves to dairy, and he loves his animals.”

That first batch, a Gouda-style cheese, proved every bit as good as the cheese he’d tasted in Europe and Vermont. Dave knew he was onto something good, so he enlisted his son Matt, now the head cheesemaker at Eagle Mountain, to experiment with different recipes. These days they make six different styles of cheese, including various Gouda, Trappist, and alpine-style cheeses.

Lindsey Schechter, owner of Houston Dairymaids, a specialty shop that sells Eagle Mountain cheeses, says the artisan cheese industry in Texas has grown significantly from about three producers a decade ago. She says that milk from Texas cows makes high-quality cheese because the cows can graze year-round in the pasture thanks to Texas’ temperate climate. Most cheesemakers assert that cheese made from the milk of grass-fed cows, rather than those who eat corn or other processed feed, is richer and more complex in flavor.

Eagle Mountain’s signature cheese is called Granbury Gold, made with a Gouda recipe and aged for less than six months. According to Schechter, “Granbury Gold is one of Texas’ best cheeses right now.”

In addition to Dairymaids, Eagle Mountain cheeses are sold in select Central Market locations, Antonelli’s Cheese Shop in Austin, and Scardello in Dallas. The cheese also stars on the menus of fine restaurants around Texas, such as Bolsa, Mudhen Meat and Greens, The Rustic, CBD Provisions, and Texas Spice in Dallas; Café Modern and Bonnell’s in Fort Worth; and restaurants in the Gaylord Texan in Grapevine.

But Dave and his team have even bigger plans: Dave recently purchased the former 1940s gas station building a few doors away from his shop to build a wood-fired pizza restaurant that should open later this year.

And twice a year, Dave offers intensive cheesemaking classes taught by the same people who taught him in Vermont—Linda and Larry “the Cheese Whisperer” Faillace, who fly in for the three-day courses. During these hands-on classes, participants learn how to make several cheese recipes using ingredients and tools they have in their home kitchens, and they also receive tips on cheese tasting and how to pair cheeses with wine and beer.

At the end of my abbreviated class, we settle in for a simple lunch, featuring pasta and samples of Eagle Mountain’s various cheeses. A tangy cheese called tomme—traditionally made in the French Alps or Switzerland—is creamy on the palate with a buttery zip that would pair well with apples or a glass of sauvignon blanc. We nibble it up, rind and all. “The rind is one of the best parts,” Matt says.

Dave sometimes cracks a joke about whether he’ll ever figure out what he wants to be when he grows up. But you get the sense that he just might have found his niche.